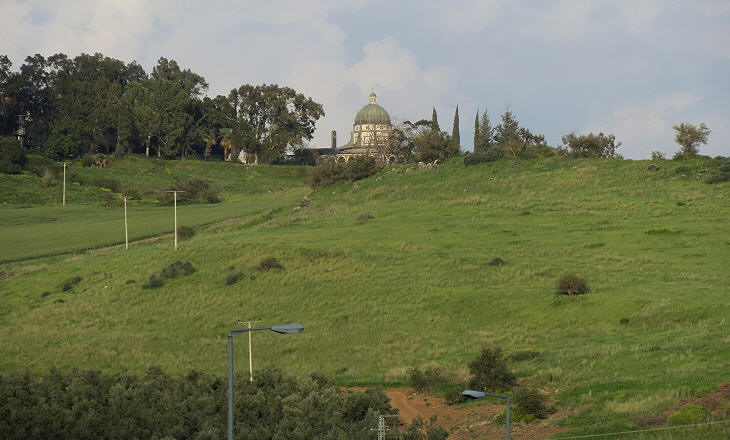 Twelve miles north north east from Nazareth, we came to the mount of Beatitudes, where our Saviour delivered his remarkable sermon; it is about ten miles north of mount Tabor. From the plain to the south, it appears like a long low hill. (..) At the first sight the whole hill appears to be rocky and uneven, but the eastern mount is a level surface, covered with fine herbage; and here, they say, it was, that those blessings proceeded out of the mouth of the Redeemer of mankind: The mount is ninety paces long, and sixty wide. About the middle of this eastern mount are the foundations of a small church twenty-two feet square, on a ground a little elevated, which probably is the place where they supposed our Saviour was, when he spake to his disciples. To the west of it there is a cistern under-ground, which might serve for the use of those, who had the care of the church. About two miles to the east, near the brow of this high ground which runs to the sea of Tiberias, there are several large black stones; two of them stand together, and are larger than the rest; and, it is said, Christ blessled the loaves on them, when he fed the five thousand, whom he made to sit down on the grass.
Richard Pococke - A Description of the East and Some Other Countries - 1745 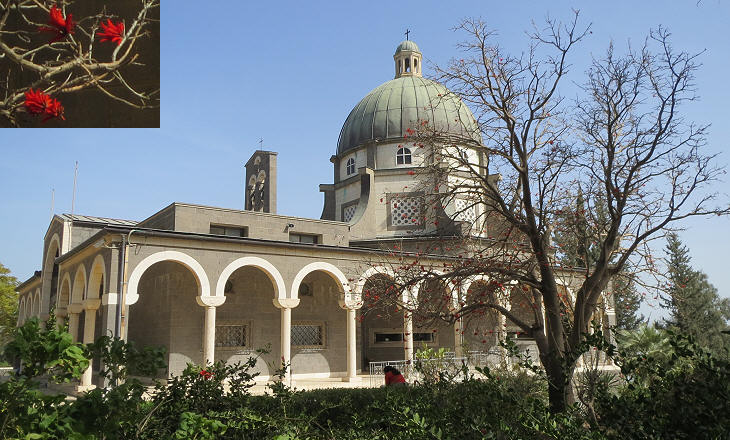 Church of the Beatitudes (see its dome in the image used as background for this page); (inset) detail of the flowers of the tree in the foreground, Erythrina Crista-Galli or Cockspur Coral Tree

In 1938 Italian architect Antonio Barluzzi designed a large church attached to a Franciscan nunnery. Barluzzi (1884-1960) spent most of his life in the Holy Land where he built several churches in different styles, e.g. Dominus Flevit on the Mount of the Olives. 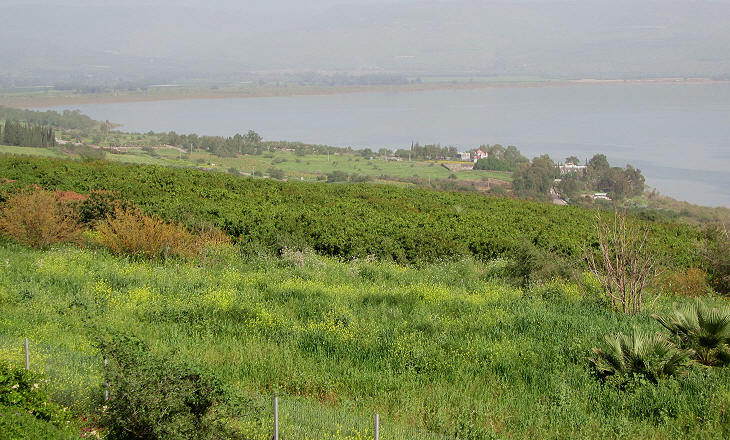 The places made most particularly celebrated by the presence of Christ are nearly all right here in full view, and within cannon-shot of Capernaum.
Mark Twain - The Pilgrims Abroad - 1869 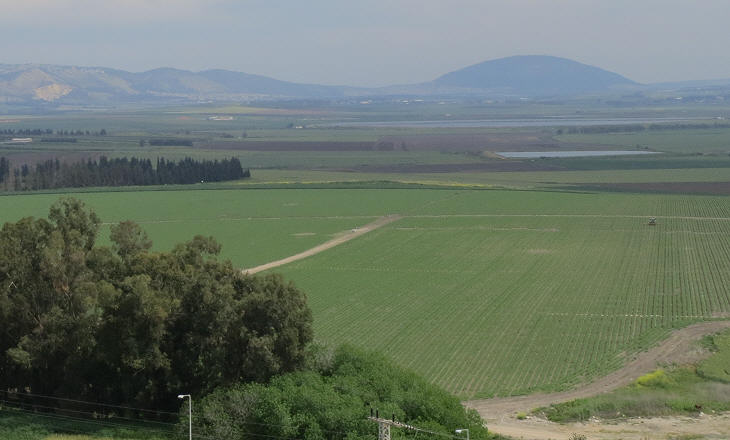 Jezreel Valley and Mount Tabor seen from Megiddo, an ancient fortress; you may wish to see Mount Tabor from Belvoir, a fortress of the Crusaders, in the introductory page

We left Nazareth, very early in the morning, to go eastward to mount Tabor, called by the people Jebel Tour; and travelling two hours between low hills, we came into the plain of Esdraelon; the mount is on the west side of it; (..) it is one of the finest hills I ever beheld, being a rich soil, that produces excellent herbage, and is most beautifully adorned with groves and clumps of trees. Pococke
June 26th 1812. We wore nearly three hours, from our departure from the Khan, in reaching the top of the Mount. Mount Tabor is almost insulated, and overtops all the neighbouring summits. On its south and west sides extends a large plain, the Plain of Esdrelon of the Scriptures. To the S. of the plain are the mountains of Nablous, and to the N. of it, those of Nazareth. (..) The plain of Esdrelon is about eight hours in length and four in breadth, it is very fertile, but at present almost entirely deserted.
Johann Ludwig Burckhardt - Travels in Syria and the Holy Land - 1822
We reached Tabor safely. (..) We never saw a human being on the whole route, much less lawless hordes of Bedouins. Tabor stands solitary and alone, a giant sentinel above the Plain of Esdraelon. It rises some fourteen hundred feet above the surrounding level, a green, wooden cone, symmetrical and full of grace - a prominent landmark, and one that is exceedingly pleasant to eyes surfeited with the repulsive monotony of desert Syria. We climbed the steep path to its summit, through breezy glades of thorn and oak. Twain

Mount Tabor and the village of Shibli - Umm al-Ghanam

Though the Khan is at no great distance from the foot of Mount Tabor, the people could not inform us whether or not the Mount was inhabited at present; nor were they hospitable enough either to lend or sell us the little provision we might want, should there be no inhabitants. (..) The shape of Mount Tabor is that of a truncated cone; its sides are covered to the top with a forest, of oak and wild pistachio trees; its top is about half an hour in circuit. The mountain is entirely calcareous. We found on the top a single family of Greek Christians, refugees from Ezra, a village in the Haouran, where I had known them during my stay there in November, 1810. They had retired to this remote spot, to avoid paying taxes to the government, and expected to remain unnoticed. Burckhardt
Two hours east of Nazareth was Mount Tabor whose round top soars considerably above the heights near it. We arrived at ten minutes past eight at the foot of Mount Tabor on the northwest side where stands a very small village. We immediately ascended the mountain at the top of which we stopped at a quarter past nine. The ascent was very steep and we had to climb over large masses of rock, but I should not think the perpendicular height above half a mile. At the top we found a field of corn, but in general the mountain is scattered with trees, chiefly oaks, and covered with high grass and such abundance of flowers and herbs that the air is strongly perfumed.
William Turner - Journal of a Tour in the Levant - 1820 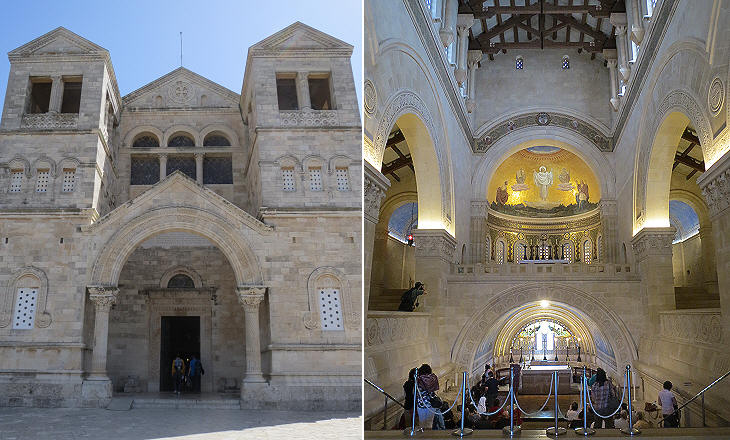 Antiochus, king of Syria, took the fortress on the top of this hill; Vespasian also got possession of it, and, after that, fortified it with strong walls; (..) On the east part of the hill are the remains of a strong castle. (..) It is said, there was a magnificent church built here by St. Helena, which was a cathedral when this town was made a bishop's see. Pococke
On the top of Mount Tabor are found the remains of a large fortress. A thick wall, constructed with large stones, may be traced quite round the summit, close to the edge of the precipice; on several parts of it are the remains of bastions. (..) The area is overspread with the ruins of private dwellings, built of stone with great solidity. (..) The Christians consider Mount Tabor a holy place, in honour of the Transfiguration, but the exact spot at which it took place is not known; and the Latins and Greeks are at variance upon the subject. The Latins celebrate the sacred event in a small cavern, where they have formed a chapel; at about five minutes walk from which, the Greeks have built a low circular wall, with an altar before it, for the same purpose. The Latin missionaries of the Frank convent of Nazareth send annually two fathers to celebrate a mass in their chapel; they generally choose St. Peter's day for making this visit, and arrive here in the morning, in order that they may read the evening mass in the church of St. Peter at Tabaria. Burckhardt
On the summit are considerable ruins of an old convent and church. Tabor is very interesting from a tradition extant in the time of St Jerome that it was the scene of our Saviour's Transfiguration. Turner
There is nothing about Tabor (except we concede that it was the scene of the Transfiguration), but some gray old ruins, stacked up there in all ages of the world from the days of stout Gideon and parties that flourished thirty centuries ago to the fresh yesterday of Crusading times. It has its Greek Convent, and the coffee there is good, but never a splinter of the true cross or bone of a hallowed saint to arrest the idle thoughts of worldlings and turn them into graver channels. A Catholic church is nothing to me that has no relics. Twain 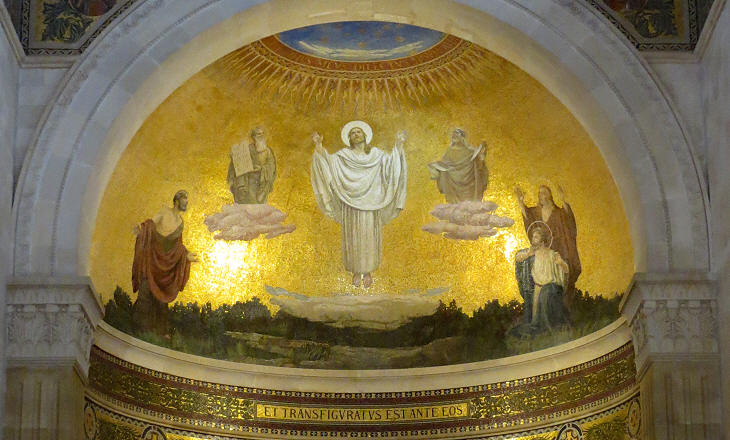 Mosaic in the apse

What has made Mount Tabor more famous than any thing else, is the common opinion from the time of St. Jerom, that the transfiguration of our Saviour was on this mountain, when Moses and Elias appeared as talking to him in the presence of Peter, James, and John. Pococke
The identification of Mount Tabor with the site where the Transfiguration occurred is not linked to a specific reference in the Gospels. Its isolation, which makes it visible from most parts of Galilee, and its location, between Nazareth where Jesus was born and the Sea of Galilee where he preached, were the key factors which led early Church Fathers to assume Mount Tabor was the site of the Transfiguration. 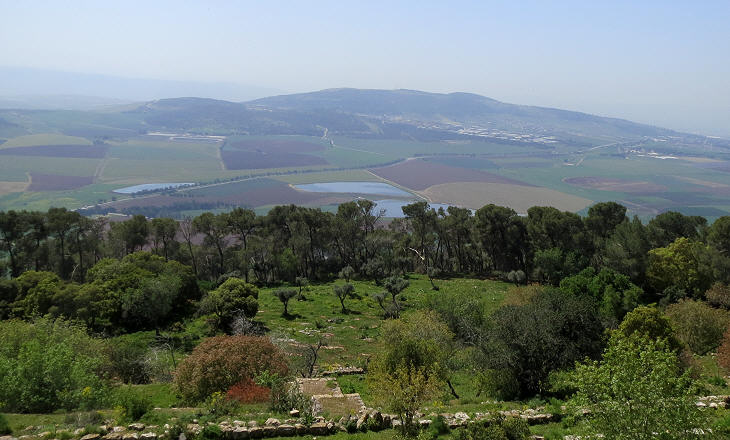 Mount Tabor is not only a most beautiful hill in itself, but also commands a very glorious prospect, especially of many places famous in sacred writ; as, to the south, of the mountains of Samaria; to the east, what they call the hill of Hermon, and, at the foot of it. (..) At the south west corner of the plain one sees mount Carmel: To the north, the mount on which our Saviour delivered his sermon to the people, and, near it, the place where he blessed, and miraculously distributed the loaves to the multitudes. The sea of Tiberias is likewise seen from this height; and to the north west of it, Saphet, on a very high mountain; to the north of which, a much higher is seen, called Gebel-Sheik, which seems to be Hermon, and is always covered with snow. Pococke
The view presented from its highest peak was almost beautiful. Below, was the broad, level plain of Esdraelon, checkered with fields like a chess-board, and full as smooth and level, seemingly; dotted about its borders with white, compact villages, and faintly penciled, far and near, with the curving lines of roads and trails. When it is robed in the fresh verdure of spring, it must form a charming picture, even by itself. Twain