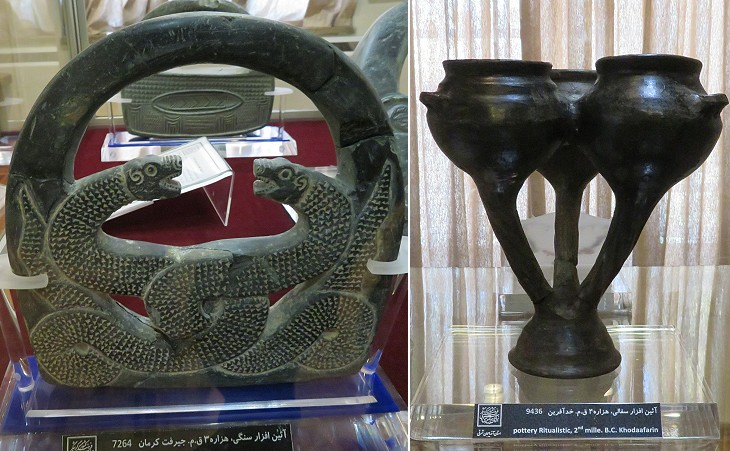 Exhibits of the third/second millennium BC: (left) a chlorite relief (another one is shown in the icon of this page); (right) triple cup; see other prehistoric exhibits in the introductory page

The Azerbaijan Museum of Tabriz was opened in 1962; it houses an interesting collection of exhibits some of which however were not made in that region. The chlorite relief was most likely made in the region of Jiroft, in South-Eastern Iran. Chlorite is a soft and easy-to-work greenish rock. Given their weight, chlorite objects rarely exceed 25 cm in height. Some display a large ring-shaped handle and are reminiscent of the shape of a "handbag". They were often decorated with pairs of animals. 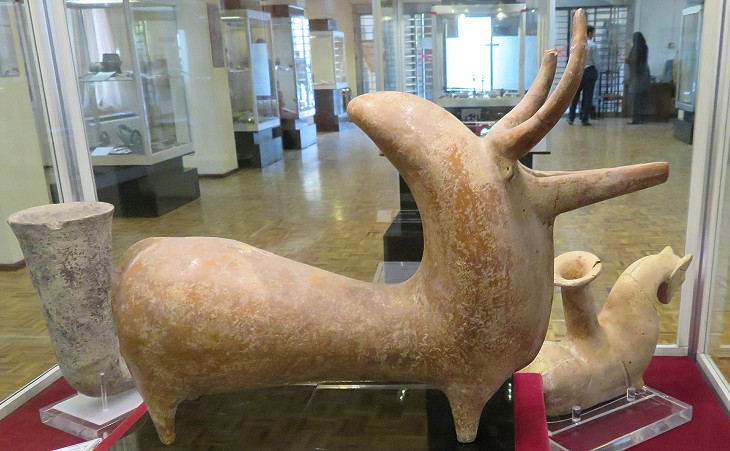 Rhytons, from a Greek root meaning pouring, were containers for fluid to be drunk or poured; they often had the aspect of an animal head or horn (see a rython on Cyprus). They usually have been found in tombs which suggests they were used for funerary banquets. That shown above depicts a bull with a hump, maybe a zebu. Similar rythons have been found during illegal excavations in the 1960s at Amlash, a valley near the Caspian Sea. A number of forgeries labelled as "Amlash culture artefacts" are on sale in the internet. 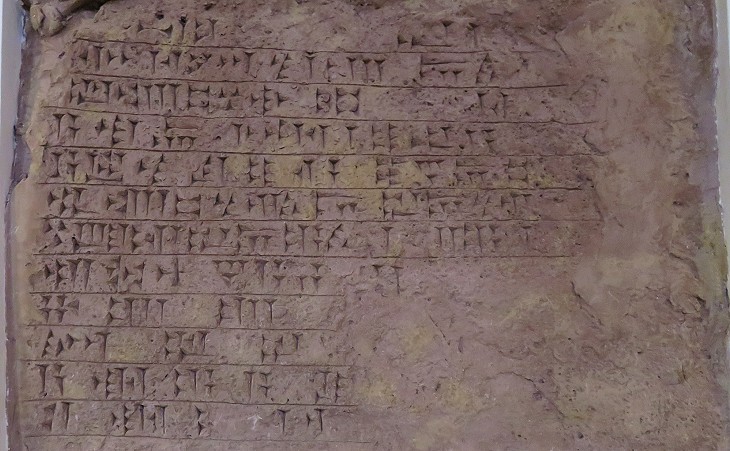 Urartu is the name by which Assyrian sources report the conquest of territories around Mount Ararat, an extinct volcano in the north-eastern extremity of Turkey close to the Iran border. Today the name indicates an ancient kingdom in the tableland between the Lake of Van in Turkey and that of Urmia in Azerbaijan. It was conquered by the Medes in the VIIth century BC. The inscription at the museum is written in the cuneiform (wedge-shaped) syllabic alphabet used in Mesopotamia. The Urartian language is thought to have influenced the development of the Armenian one. 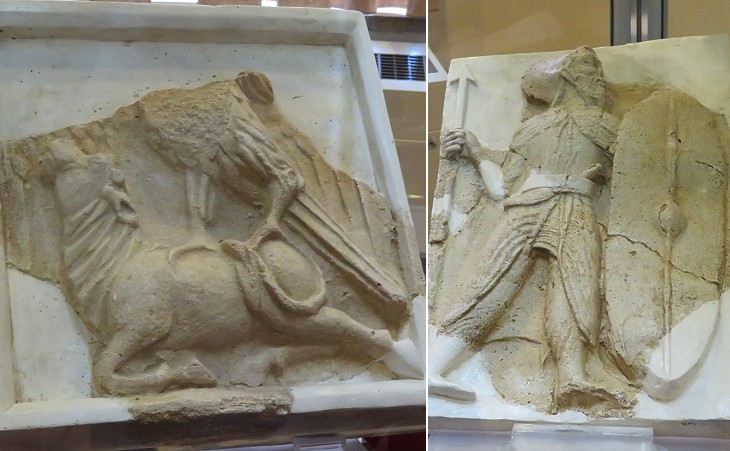 Parthian stuccoes from the Zahak fortress at Hashtroud; the image used as background for this page shows a fragment of Parthian pottery depicting a bull with long horns

The Parthians and the Sassanids ruled Azerbaijan for eight centuries, but there is scanty evidence of their monuments and in particular of their temples because in the VIIth century the Arabs were particularly effective in stamping out all traces of their religion which worshipped the fire, something which the invaders regarded as being in stark contrast with Islam (the Quran describes the devil as a creature of fire). Their iconoclast fury did not spare palaces and castles, but some large rock reliefs at Bishapur, Persepolis and other locations outside Azerbaijan were not destroyed. A rare example of Parthian stucco decoration was found in a fortress near Zanjan, along the main road between Tabriz and Tehran. The exhibits at the museum follow rather classical patterns also in the choice of the subjects.
The museum has also an interesting collection of coins of the Parthian and Sassanid rulers, some of which are shown in the introductory page. 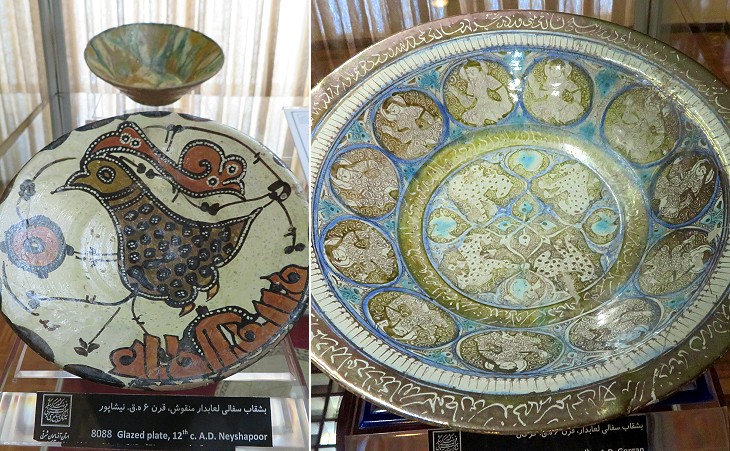 The bowls from Neyshapur are characterized by a decoration based on birds, stylized flowers and, above all, Kufic inscriptions. The lustre glazed bowls from Gorgan show the use of gold and the portrayal of human beings. While the decoration of religious buildings in Muslim Persia and Turkey complied with the prohibition of depicting living beings, more freedom was allowed in that of small objects and book illustrations, where one can notice the influence of Chinese patterns. 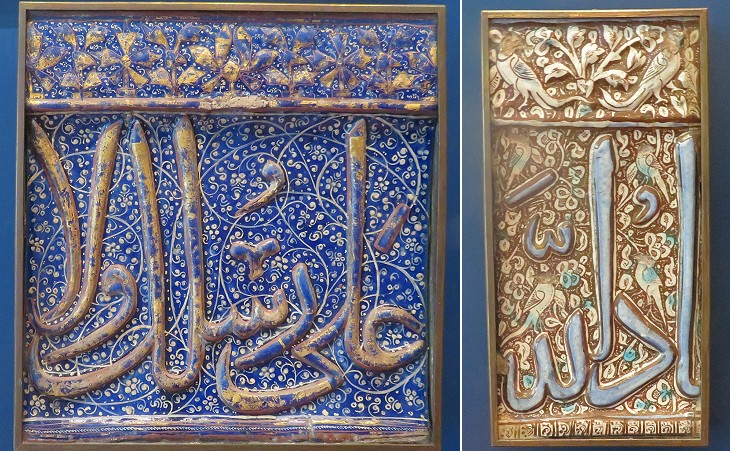 During the Ilkhanate period new colours were introduced and the use of glazed tile on buildings became common, e.g. at Soltaniyeh.
You may wish to visit Cinili Kosk (Tiled Pavilion), the Istanbul museum of ceramics. 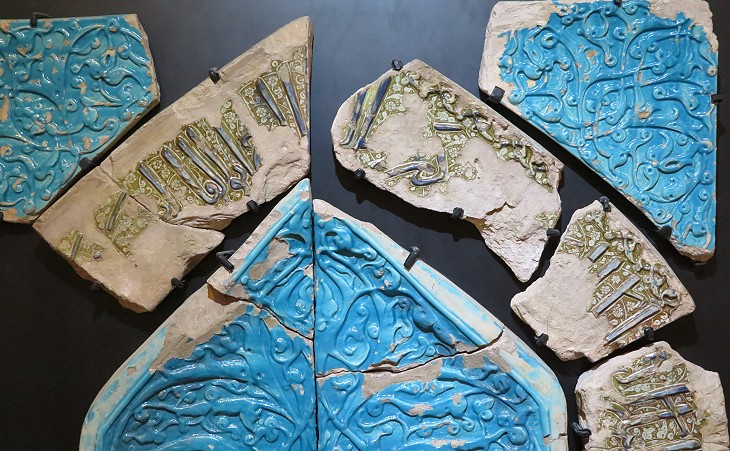 Fragments of a portal with inscription of the Ilkhanate period

Return to the town or to the Blue Mosque.