Baku: The Old Town
(IIIrd millennium BC stone relief at the Azerbaijan Museum of Tabriz)

Baku is part of Old Persia. Nine-tenths of the population are descendants of subjects of Shah Abbas. The manners and customs of the bazaars are thoroughly Persian. (..) The Persian women in Russian Baku rarely leave their homes.
Arthur Arnold - Through Persia by Caravan - 1877
Apart from the oil, Baku - especially the European settlement - has nothing to fascinate the traveller. In the native city, Persian in type, with flat roofs one above the other and the hill top crowned by a castle and the Mosque of Shah Abbas, constant murders occur. (..) The native population consists mostly of Armenians and Persians.
A. Henry Savage Landor - Across Coveted Lands - 1902 Model of the Old Town: 1) Qiz Qalasi (Maiden's Tower); 2) Mohammed Mosque (it is shown in the introductory page); the red line surrounds the Shirvanshahs' Palace and its ancillary facilities; "Shirvanshah" means Shah (Ruler) of Shirvan, the region south of Baku

Rising from the south shore of the Apsheron Peninsular at the western edge of the Caspian Sea, the Walled City of Baku was founded on a site inhabited since the Palaeolithic period. The city reveals, along with the dominant Azerbaijani element, evidence of Zoroastrian, Sassanian, Arabic, Persian, Shirvani, Ottoman, and Russian presence in cultural continuity. The inner city (Icherisheher) has preserved much of its 12th-century defensive walls. (..) The demolition and complete reconstruction of some buildings impacted adversely the authenticity of the overall urban ensemble. (..) Controls on development of the wider setting of the city is also needed so as to ensure it retains its links with the sea and does not become a small island within high-rise developments.
From the UNESCO synthesis of the universal value of the Walled City of Baku which in 2000 was included in the World Heritage List. 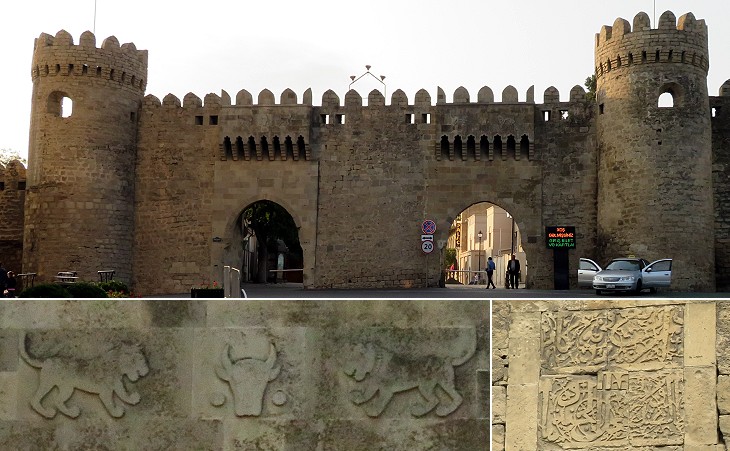 (above) Qosha Qala Qapisi (Main Gates); (below-left) relief (similar to those which can be seen on a XIIth century tower at Silvan in Eastern Turkey and on the Lion Gate of Jerusalem); (below-right) inscriptions

Baku is first recorded in Islamic chronicles of the Xth century with reference to its natural harbour and to petroleum. The latter was used as a waterproofing agent for plumbing, boat building, brick bonding and as a medicament. Baku became an important town of Shirvan, a region along the south-western part of the Caspian Sea, which was ruled by a local dynasty, in practice a vassal state of the large empires which were based at Baghdad, in Persia or in Central Asia. In the XIth century the conquest of the region by the Seljuks led to the adoption of a Turkish language, similar to what occurred in Iranian Azerbaijan. Seljuk architecture appears to have had a lasting impact on that of medieval Baku, which became the capital of Shirvan at the end of the XIIth century.
In the 1870s the outer early XVIIth century walls of the town were demolished and one of their gates was relocated in the inner XIIth century walls at the side of an existing gate. The crenelated battlement was added in the 1930s. Overall Qosha Qala Qapisi is a modern pastiche. 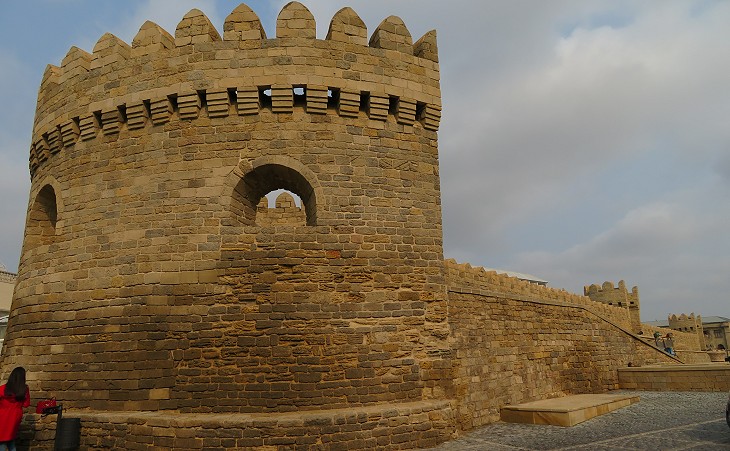 Highly restored towers in the upper part of the walled town

Local dynasties ruled Shirvan until the region was conquered by Shah Ismail in 1500 and eventually annexed to the Safavid Empire. In 1578 Baku was occupied by the Ottomans, but Shah Abbas dislodged them in 1607. He enforced mass conversions to Shia Islam, which is the religion of 90% of the population of the Republic of Azerbaijan.
During the XVIIIth century another threat to the Safavid possessions along the Caspian Sea materialized in addition to the Ottoman one. In 1723 Czar Peter the Great, while claiming he wanted to support the Safavids against the Afghans who had invaded Persia, occupied Baku and other places along the Caspian Sea coast, the possession of which were acknowledged to him by the Shah. In 1732, after the death of the Czar, some of these places were restored to Persia and in 1735 the Russians left also Baku. In 1806, during a disastrous period for Persia, Baku was conquered for good by Russia. 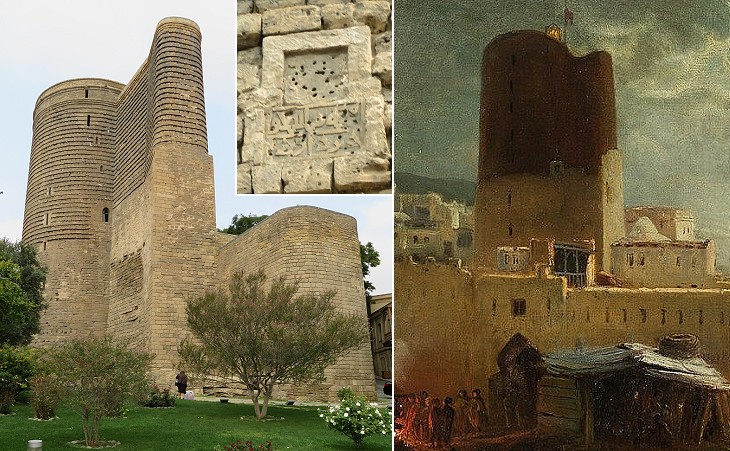 (left) Qiz Qalasi (Maiden's Castle/Tower) (the name of another fortification in Turkey); (inset) small inscription which indicates that the tower was erected in the XIIth century, probably on the site of a previous building; (right) the tower in an 1880 painting by Paul van Franken when it was used as a lighthouse

When a stranger - a European - arrives in Baku, nobody seems to have any doubt as to his destination. In the first place, he, with all his luggage, must desire to go to "Dominique". If a European landed at Baku and said nothing, he would be taken to Dominique. No one ever alludes to "the Hotel d'Italie", though that is synonymous with Dominique, who is, in fact, the landlord of that hotel. (..) Dominique is a quaint, pleasant fellow, and, from the spacious balcony, points out, between puffs of his cigar, the chief objects of interest in Baku. (..) He kindly volunteers a recital of the legend concerning "The Maiden's Tower", the most prominent building in Baku, a huge cylinder of masonry rising in the lower part of the town, which is somehow connected at present with the water supply of the place. The khan, it appears, had a daughter - lovely, of course, like all the ladies of all the legends - whose will he desired to coerce - matrimonially, we need not say. The daughter, whose inclinations were opposed to her father's commands, ascended the tower, which the khan was then building, and soon afterward her lifeless body was carried from its foot. Arnold
The most ancient monument of Icherisheher is the Maiden Tower - symbol of the city of Baku. UNESCO 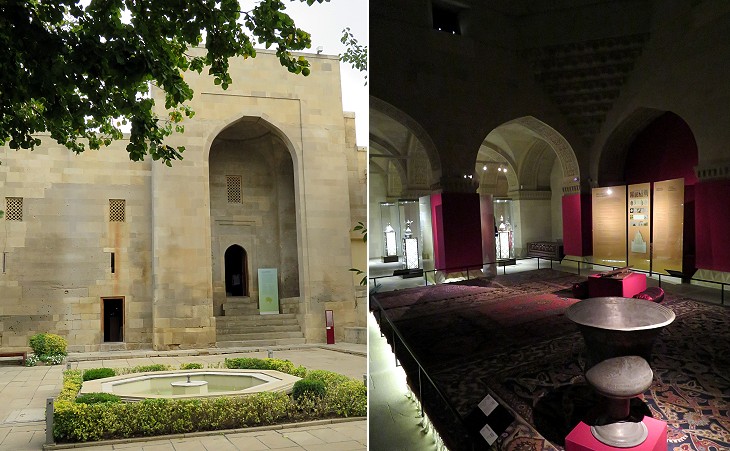 Dominique directs our eyes to the sombre, solid building, placed in a station of command where the town rises highest - the old palace of the Khans of Baku - now used as a military store-house; a building, in its fluted arches and in other features thoroughly Persian or Moorish, but, though very similar in style, infinitely inferior in design and workmanship to the palaces of the Deys of Tunis and Algiers. Arnold
Another monument of universal value, one of the pearls of Azerbaijan's architecture is the 12th to 15th century Shirvanshahs' Palace, located at the highest point of Icherisheher. Within the Palace complex are the Divankhana (reception hall) or, as some researchers believe, the Tomb of Shah, the residential building of Shirvanshahs, the remains of Key-Kubad Mosque, the Tomb of Seyid Yahya Bakuvi, Murad's Gate (the only monument of the 16th century), the Tomb of Shirvanshahs' Family, the Shah Mosque and the Palace bath-house. UNESCO 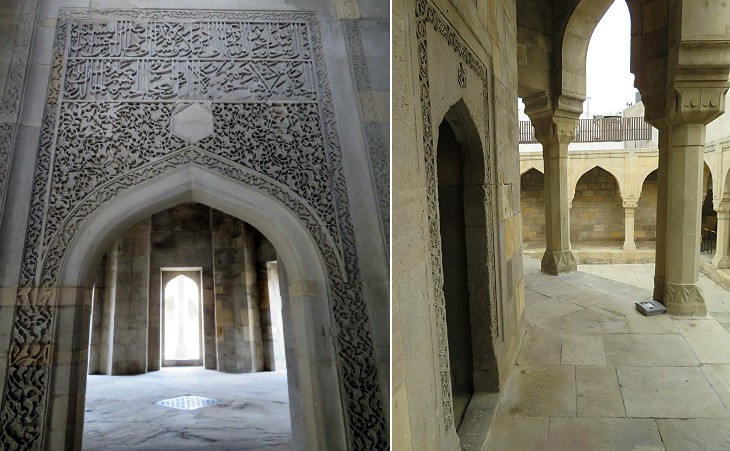 (left) One of the entrances to the hall of Divankhana; (right) the portico surrounding the building

During the Safavid rule over Baku (1607-1806) the palace was no longer the object of enlargements or embellishments. The Russians turned it into barracks and military warehouses and deprived it of all its furnishings, so that today it is not easy to exactly indicate the purpose of some of its buildings. The name given to a domed hall surrounded by a portico suggests it was used for meetings of the local shah with his council, the Divan, the same term used by the Ottoman Sultans for their Imperial Council. 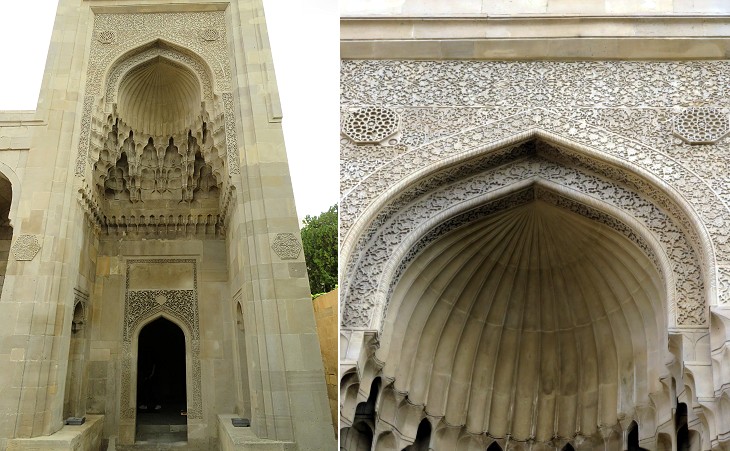 The influence of Seljuk architecture is evident in the design of very tall and rather narrow portals and in their decoration with very fine stone carvings, rather than with the glazed tiles which were used in Ilkhanid, Timurid and Safavid buildings at Soltaniyeh, Samarcand and Isfahan, respectively. Portals similar to those at Baku can be seen in many former Seljuk towns in Anatolia, e.g. at Karaman and Sivas. The very deep and tall niche of the portal favoured the circulation of air, similar to an iwan. 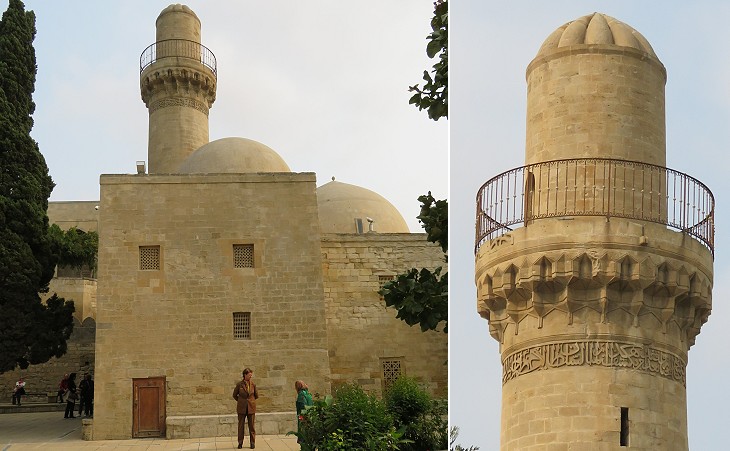 (left) Mosque of the Palace; (right) detail of its minaret; the image used as background for this page shows a maze-like relief at the mosque which actually is a series of geometric inscriptions praising God (see a similar inscription at Diyarbakir in Eastern Turkey)

The minarets of Baku have a rather stout appearance which makes them resemble a lighthouse and departs from the slender one which characterizes the minarets of Persia and Central Asia. Hereagain the similarity is with some non-Ottoman minarets in Anatolia e.g. that of Alaeddin Camii at Nigde which has also portals similar to those at Baku. 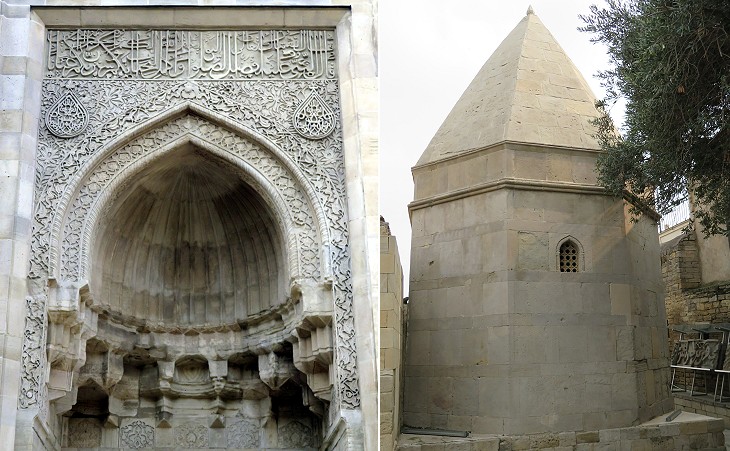 (left) Detail of the portal of Shahs' Turbe, the mausoleum where the relatives of the Shah were buried; (right) small turbe of Seyid Yahya Bakuvi

The similarity in the design and decoration of the portal of the Shahs' Turbe with that of the Divankhana is striking, even more when one considers that they both are almost identical to another portal built by the Ottomans in 1585. In general Islamic art refrains from such repetitions, as shown by the three portals of Ulu Camii at Divrigi, which, although having been designed by the same architect, are greatly different.
Seyid Yahya Bakuvi was a holy man who died in 1457. He lived at the court of the Shah of Sirvan and a detached mausoleum was built for him in a corner of the palace. It is a kumbet, a small octagonal building of which many examples can be seen at Kayseri. 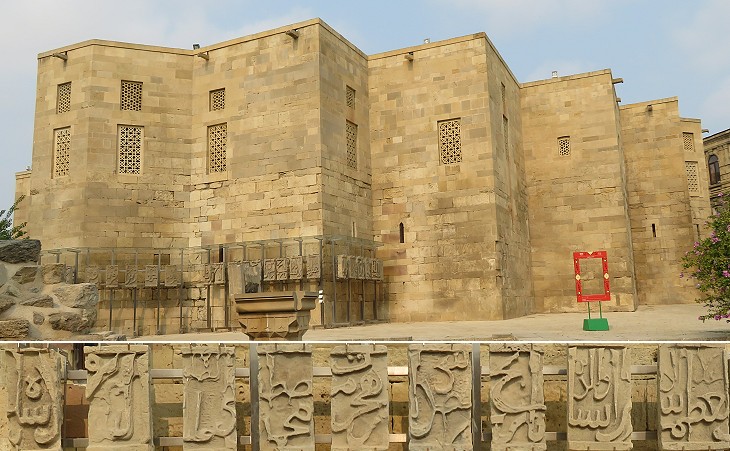 (above) Palace - Eastern side; (below) parts of inscriptions from the Sabayil Fortress

A XVth century chronicle of the history of Baku indicates that the town had two castles, one including Qiz Qalasi and another one further offshore. In the XVIIIth century evidence of fortifications in the sea near the town surfaced. Archaeological campaigns in 1939-1969 identified the layout of a sea castle, which probably was destroyed by an earthquake followed by the sinking of the land upon which it stood. Parts of inscriptions, now on display at the palace, indicate the name of the founder and the year (1234) of construction of the castle. Excavations in the Old Town unearthed sections of underground galleries which most likely linked the two castles. 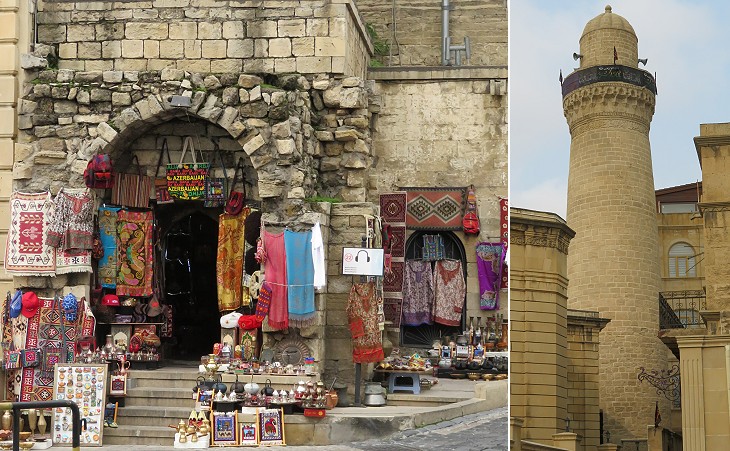 There are also numerous historical-architectural monuments of the medieval period such as caravanserais, hamams (bath-houses), mosques and residential buildings of the 18th to 20th centuries located within the property. (..) There is a need to ensure that planning controls respect the characteristics of the modest houses that contribute to the overall qualities of Baku as a reflection of a medieval city. UNESCO
Several historical buildings can be identified within the Old Town, but by and large they were greatly modified in the XIXth and XXth centuries. 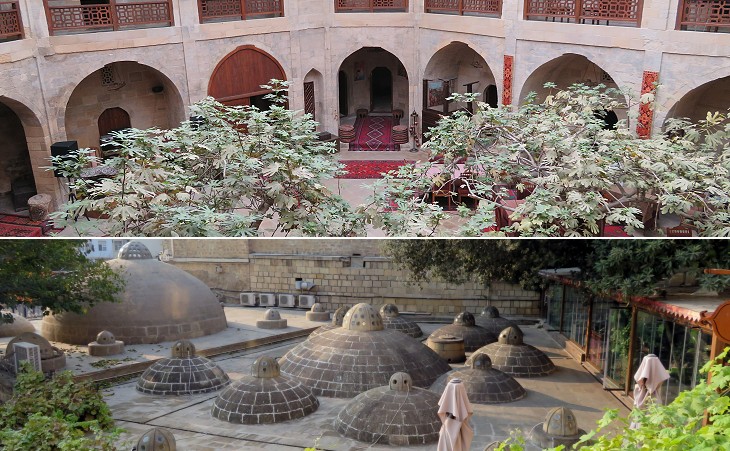 Old Town: (above) caravanserai; (below) hammam

Move to the New Town.