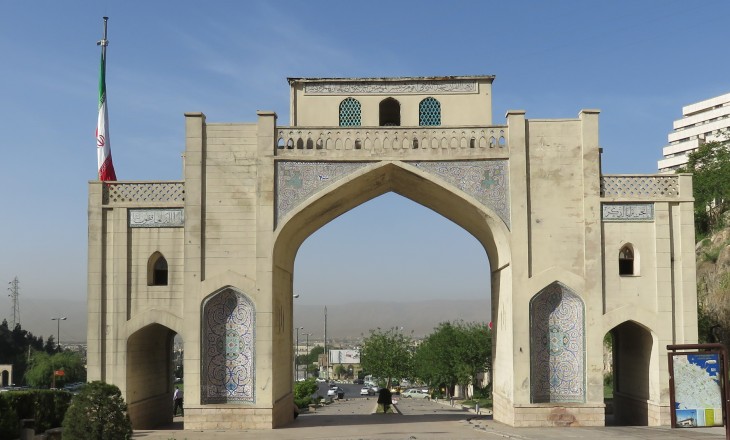 Bergner* was staying near the Allah-ho-Akbar Gate, and yesterday being Friday, the whole of Shiraz was on this road, some promenading to see their friends and the town below them, some returning from picnics, and many on horseback. The horses here are an endless pleasure and (..) they are well turned out, often with initialled saddle cloths. Even the asses have a fashionable air, large white beasts loaded with cushions, fringes and tassels; so that horsemen and assmen trot side by side on equal terms in the gay parade.
Robert Byron - The Road to Oxiana - Macmillan 1937 (piece written in 1934)
*Karl Bergner, an archaeologist working at Persepolis. 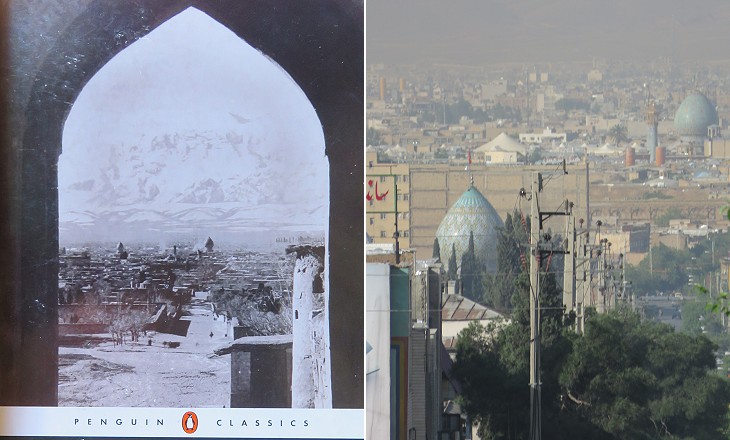 Shiraz is situated in the Fars province, the cradle of the Achaemenid and Sassanid Empires. It flourished after the Arab invasion because of its position on the roads which linked Mesopotamia to India and Central Asia to the Persian Gulf. In the early XIIIth century it was a prosperous city described in chant by Mosleh al-Din, best known as Sa'di Shirazi, a major Persian poet. Hafez Shirazi, another great Persian poet, described the pleasures of life at Shiraz in the XIVth century.
It was (and is) visited by many travellers on their way to Persepolis, Bishapur and other archaeological sites. 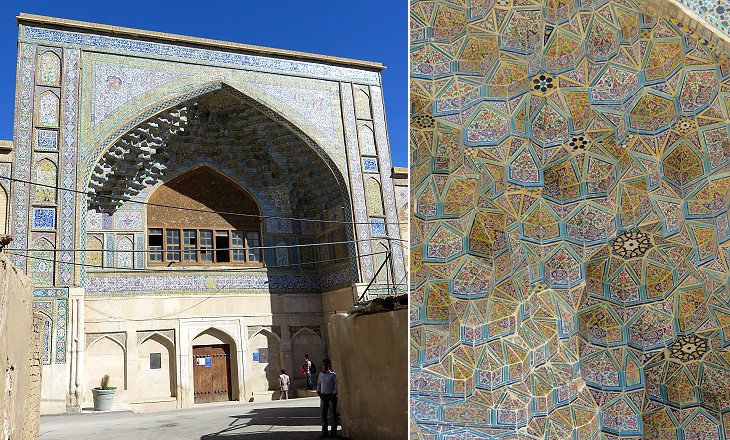 Shiraz went through many turbulent periods caused by invasions, famines and bitter internal divisions. In 1503 Safavid Shah Ismail took Shiraz and killed Sunni religious leaders and many inhabitants in an effort to enforce Shi'ism. After several ineffective Safavid governors, Shiraz was assigned to Allahverdi Khan, a general of Shah Abbas who had a major role in the redesign of Isfahan, the capital.
Allahverdi and his son Emamqoli Khan built a great medrese at Shiraz in the style of those at Isfahan. 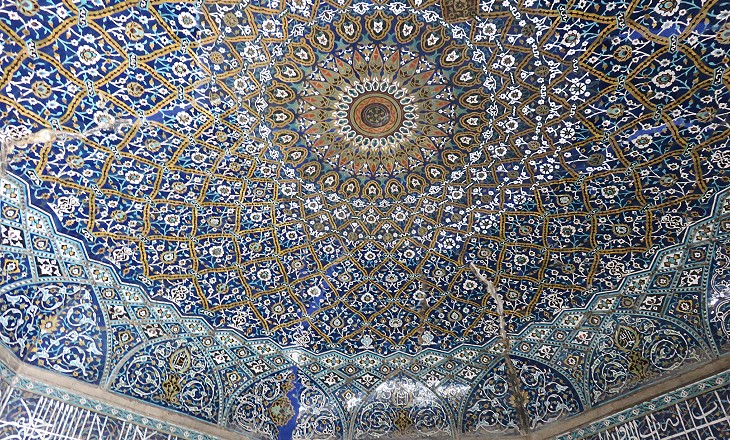 Medrese-e Khan - dome of the vestibule

The court of the College is ruined. A pretty octagonal vestibule gives access to it. This is embellished with a rich cold mosaic of the XVIIth century. Robert Byron
The decoration of the vestibule is very similar to that of the portal of Sheikh Lotfollah Mosque at Isfahan.
In 1722 leaders of Afghan tribes rebelled against Shah Hussein, the last Safavid ruler, and conquered Isfahan. In 1723 they plundered Shiraz and massacred many of its inhabitants. In 1744 the city was sacked by the troops of Nader Shah who put down the rebellion of the local governor. Nader Shah, who had managed to defeat the Afghans and had established his capital at Mashhad, in north-east Persia, died in 1747 and a civil war broke out among three of his generals. 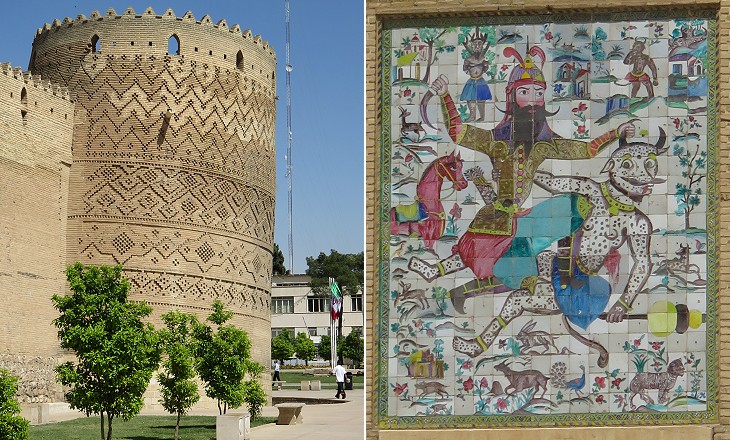 In 1750 Karim Khan, one of the three generals, became the ruler of the country with the exception of Khorasan, the region of Mashhad. He never took the title of Shah, but preferred to be called Vakil (Regent). He set his capital at Shiraz and he built a series of palaces, one of which was fortified. In 1791 Shiraz lost its role as capital of Persia and Arg-e Karim Khan became the residence of the province governors.
This is flanked by towers in a semi-ruinous state, the whole wearing a sadly dilapidated look. On entering we found two companies of soldiers in red jackets drawn up in line to receive us, the aspect of whom was ludicrous in the extreme. No two uniforms were alike; some wore shoes and some went without; a few had boots, into which were tucked their loose trousers, which were of all colours and shapes; some wore cross-belts, others dispensed with them; some were armed with firelocks at least a century old, with bits of wood instead of flints, while others boasted of the real Brown Bess (a British musket) with the Tower mark.
John Ussher - A Journey from London to Persepolis - London 1865. A Fellow of the Royal Geographical Society. 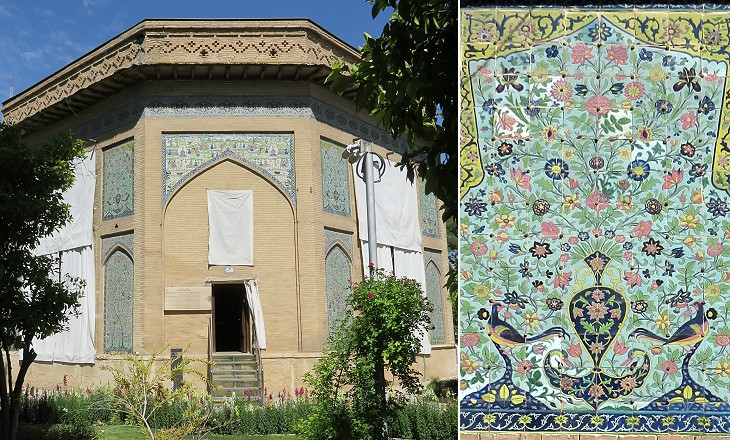 (left) Bagh-e Nazar (Pars Museum); (right) detail of its decoration with two peacocks which recalls a motif in the portal of Shah Abbas Mosque

Bagh means garden and this small octagonal pavilion where Karim Khan received guests and ambassadors was placed at the centre of a large garden. The latter was almost entirely destroyed in the 1930s to open new avenues in the historical centre of the city. Today the pavilion houses a small museum and the tomb of Karim Khan. 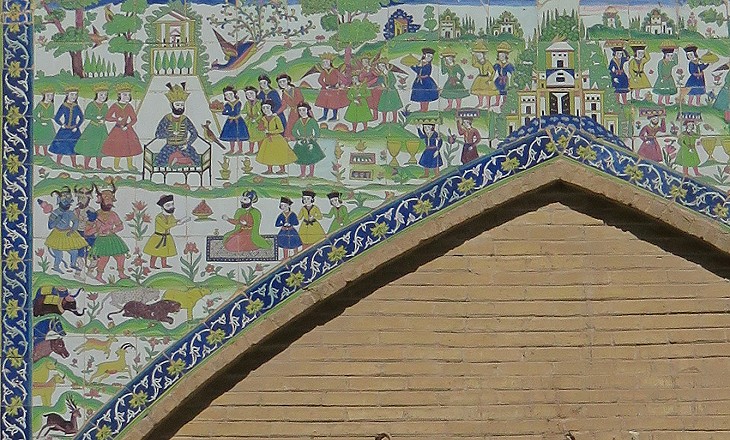 Shiraz is best known for its gardens and the two great poets who lived there. It was famous for its wines until the 1980s. These were praised by some European travellers, but not by all of them.
The wine of Shiraz is openly made, and sold publicly by the Armenians. It is of two kinds, red and white, the former tasting like rough and coarse sherry, and the latter like a sweet, thin Chablis. (..) The delicious and delicate flavour of this wine has been described in rapturous terms by Persian writers; but its excellence has been grossly exaggerated. John Ussher.
Wine is another boon of the Persian South. So far we have discovered three varieties here: a very dry golden wine, which I prefer to any sherry, though its taste is not so storied; a dry red claret, nondescript at first, but acceptable with meals; and a sweeter vin rosé, which induces a delicious well-being. R. Byron. Vakil Mosque: (left) portal; (right) detail of its decoration (the image used as background for this page shows one of its small minarets)

Karim Khan wanted to be for Shiraz, what Shah Abbas had been for Isfahan and he began the construction of a large mosque and a bazaar near his residence. He died in 1779 and his successors (Zand dynasty) were soon unable to retain control over the country. In 1794 Agha Mohammad Khan, leader of the Qajars, a powerful tribe of northern Persia, defeated the last Zand ruler and moved the capital to Teheran. Many of the monuments initiated by Karim Khan have a decoration of the Qajar period which ended in 1925. 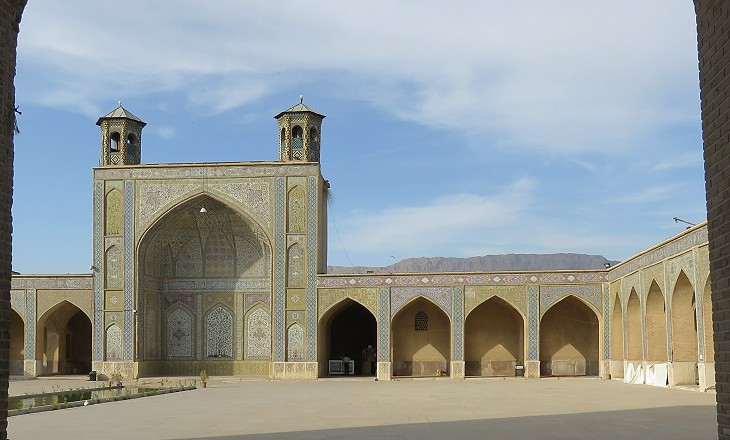 The pattern of a mosque/medrese structured around a square courtyard having four large iwans (gigantic niches/portals) was developed by the Seljuks in the XIIth century and its most impressive example is the Friday Mosque of Isfahan. This pattern was followed in the construction of many other mosques/medreses, but the fact that it was still adopted in the late XVIIIth century is a sign of the decadence of Persian architecture. 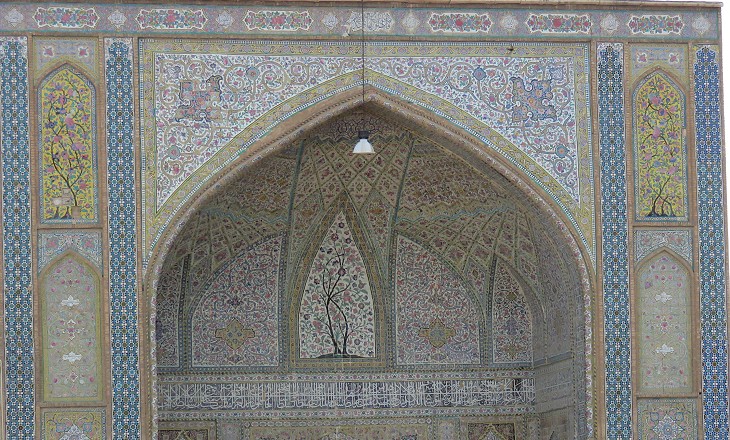 Shiraz, because of its many gardens, is known for the beauty of its roses, including those which decorate its monuments. The exuberant floral decoration of the mosque is somewhat unsuitable for a place of prayer. The bands containing religious inscriptions are kept to a minimum, whereas in previous monuments they had greater relevance. 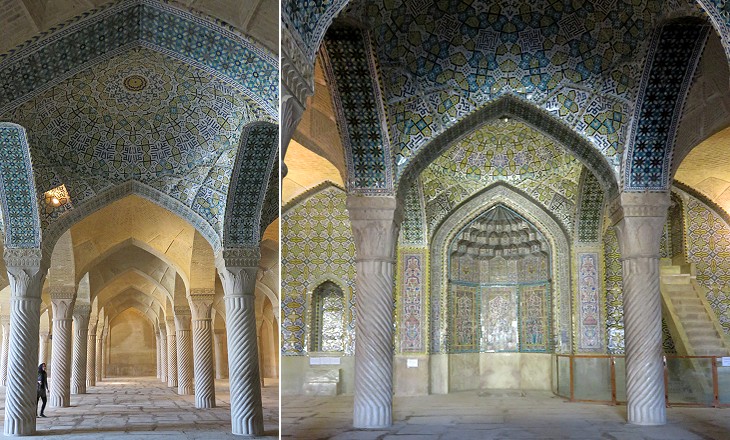 The design of the prayer room with its twisting columns is the most interesting aspect of the mosque, as it shows an attempt to create something novel. The monuments of Shiraz are curious rather than important was the remark made by Robert Byron to explain why he did not deal in detail with them as he had done with those of Isfahan. 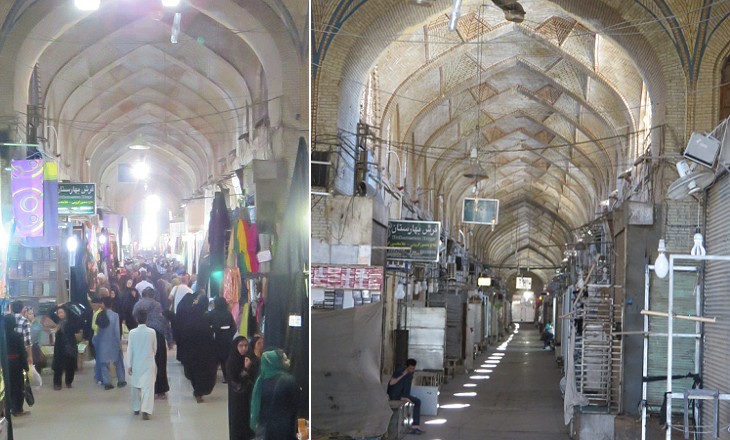 The Vakeel bazaar of no very great size, is lofty and vaulted over with brick. The shops which it contains are kept cleaner and neater than usual. John Ussher.
At Isfahan Shah Abbas built an imposing portal at the entrance of Gheisarieh Bazaar, which Karim Khan did not have time or money to build at Shiraz. The long series of vaults creates an interesting perspective effect which is best appreciated after the bazaar has closed. 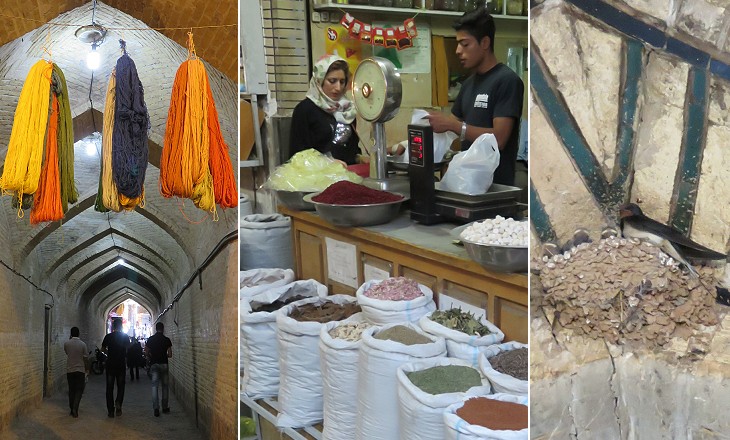 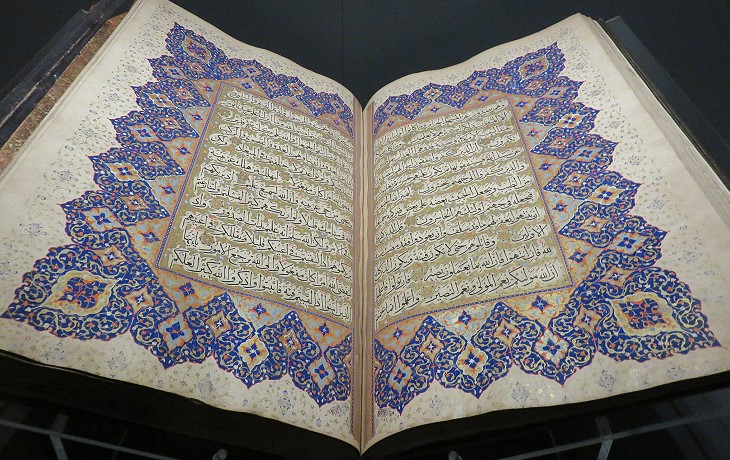