Si-o-Seh (33 Arches) or Allahverdi Khan Bridge: (above) in an old photograph posted near the bridge; (below) in early May 2014

Dusk was falling when I reached the College of the Mother of the Shah and I emerged into the Char Bagh, Shah Abbas' avenue. I drove beneath the double line of trees to the bridge of Ali Verdi Khan, which carries the road to Shiraz. The bridge encloses the road by arched walls, on the outside of which runs a miniature arcade for foot passengers. This was crowded with people, and all the town was hurrying to join them; there was never such a flood in living memory.
Robert Byron - The Road to Oxiana - Macmillan 1937 (piece written in February 1934).
Zayandeh Rud is the largest river of the Persian tableland. It originates in the Zagros Mountains, west of Isfahan, at ca 4,000m/13,000 ft and it empties into a seasonal salt lake east of the city. A dam completed in 1972 routes most of the water to Isfahan via conduits, but even before the dam was built, maadies, small canals, diverted the water for irrigation purposes and the riverbed was dry for most of the year. This explains the scene described by Byron. 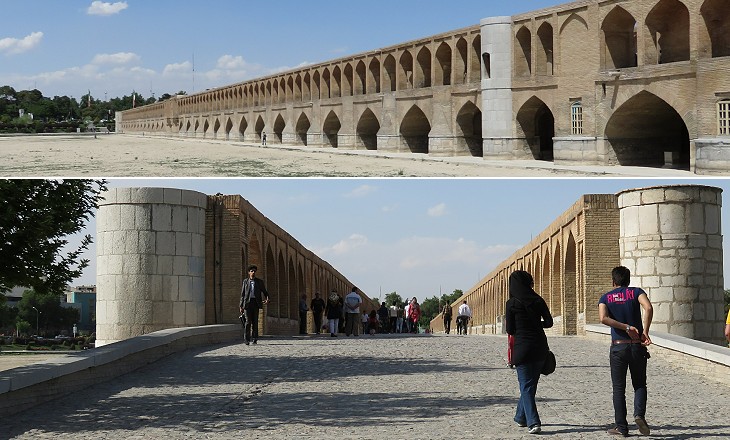 Si-o-Seh or Allahverdi Khan Bridge: (above) external arcade for pedestrians; (below) the road section (today reserved to pedestrians as cars go over a modern bridge)

Allahverdi Khan (15601613) was a Persian general and statesman of Georgian origin who, initially a ghulam ("military slave"), rose to high office at the court of Shah Abbas. He was involved in the design of the new city centre to which the bridge provided a grand entrance. Ghulams were forcibly recruited among the children of Christian Armenian/Georgian families. They directly reported to the Shah and they made up his personal guard. The creation of a large standing corps of ghulams was one of the steps taken by Shah Abbas to reorganize his army. He imitated the Ottoman sultans who already employed janissaries, personal guards of Christian origin. 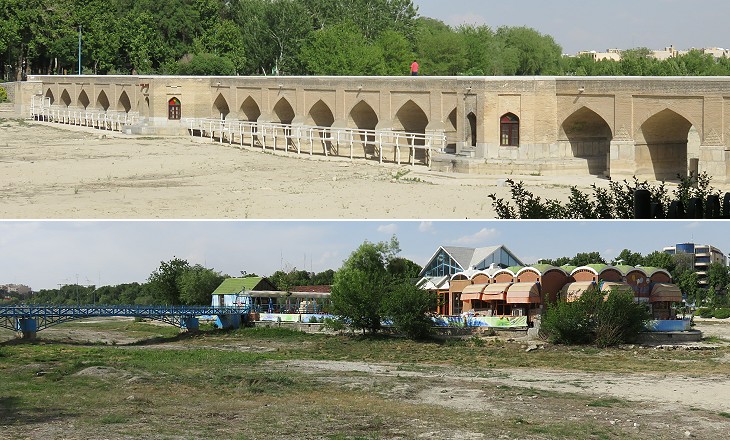 (above) Pol-e Jui Bridge (east of Si-o-Seh Bridge); (below) a modern tea house on a river island

Pol-e Jui Bridge was built in 1657 by Shah Abbas II to directly link the main royal compound with other royal pavilions and gardens south of the river (these are entirely lost). In particular the bridge was used by the harem women to attend celebrations taking place on the river. Its name means Rivulet Bridge because of a watercourse running at its centre which proves it was an integrated element of the royal compound. 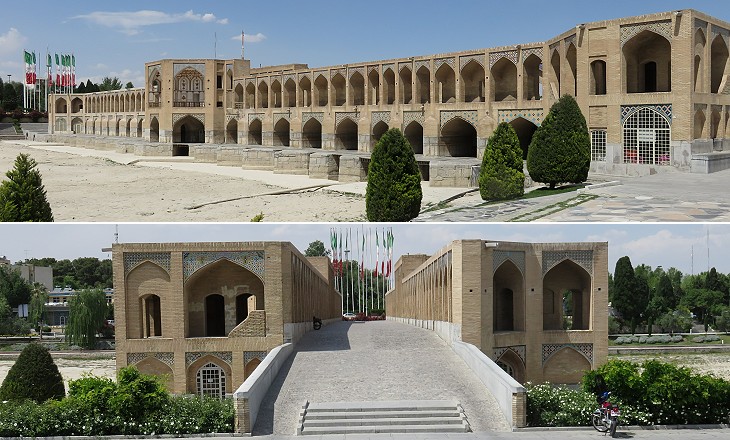 The bridge was built by Shah Abbas II in 1650. Khaju means court/courtier and it indicates that the Shah and his court and guests attended ceremonies on this bridge in a central pavilion.
Khaju bridge resembles a weir more than a bridge. During occasional floods water could flow across its lower arches, but for most of the year the water level did not exceed the base of the pylons. Sluice gates could be closed to form a small lake between this and Pol-e Jui Bridge. 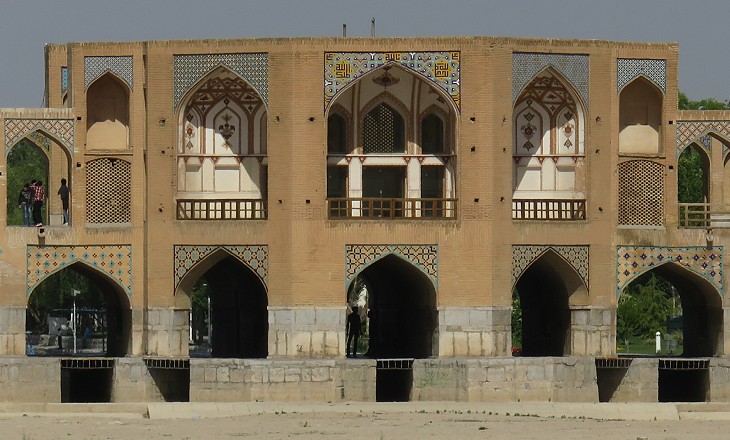 Persian and European chronicles describe festivities held at the bridge, which was decorated with lights and flowers and served for viewing fireworks, boat races and parades, in particular during Nowruz celebrations. The Islamic calendar is tied to lunar phases and its New Year is not associated with the beginning of a season. Nowruz is the solar New Year celebration and is linked with the spring equinox. Persian rulers strictly adhering to Islamic precepts have tried to suppress it, but with no success. It was already a major festivity in the VIth century BC as the reliefs of Persepolis indicate. 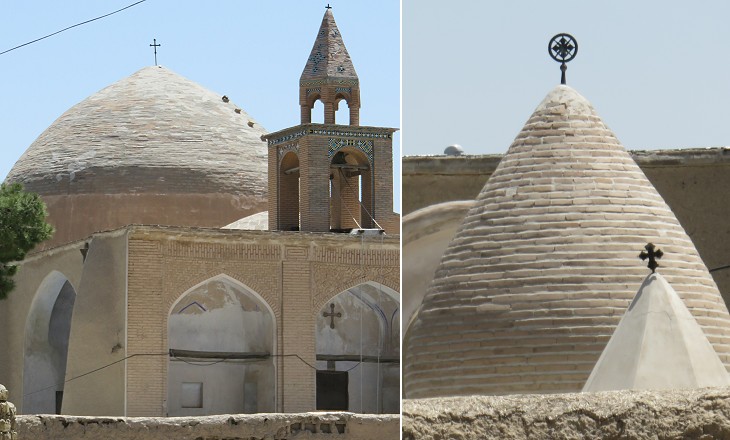 In Isfahan itself there are no missionaries among the Mahommedans, but some are to be found at Julfa, a suburb of Isfahan, on the south bank of the Zindah-rud (river). Julfa was in former days a prosperous Armenian settlement of some 30,000 inhabitants, but is now mostly in ruins since the great migration of Armenians to India. There is an Armenian Archbishop at Julfa. He has no real power, but is much revered by the Armenians themselves. He provides priests for the Armenians of India. A handsome cathedral, with elaborate ornamentations and allegorical pictures, is one of the principal structures in Julfa.
Henry Savage Landor - Across Coveted Lands - 1902. He was an English painter, explorer, writer and anthropologist (1865-1924). 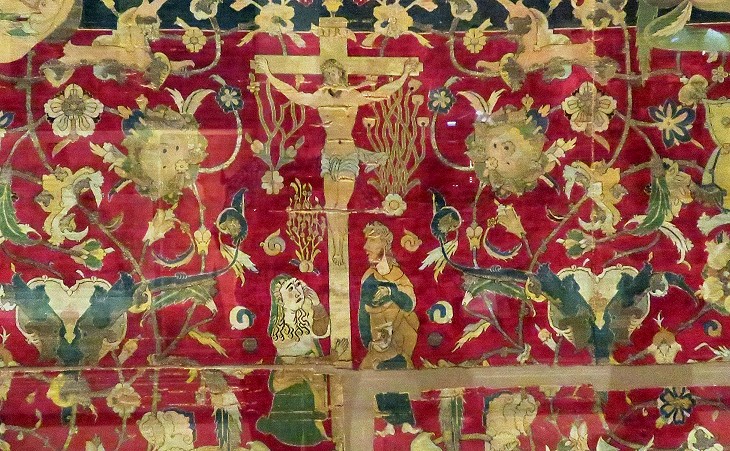 One cannot help admiring the Armenians of Julfa for retaining their conservative customs so long. Within the last few years, however, rapid strides have been made towards the abandonment of the ancient dress and tongue. At Julfa the Armenians have to a great extent retained their native language, which they invariably speak among themselves, although many of the men are equally fluent in Persian. Savage Landor 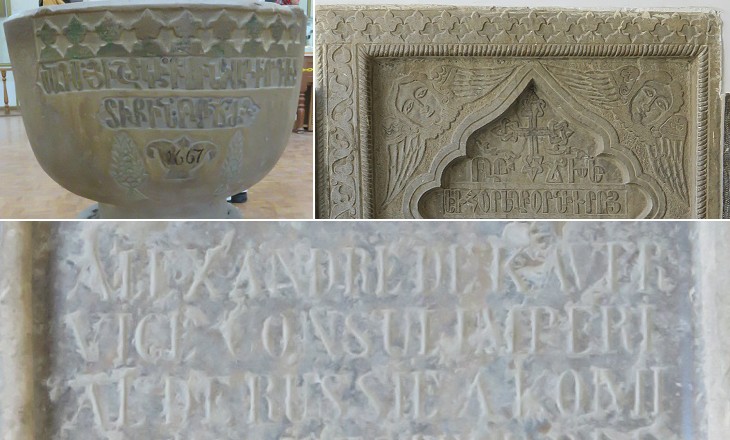 Armenian Museum: (left-above) 1667 stone water vessel similar to those found in mosques; (right-above) relief with the typical Armenian cross (another Armenian cross can be seen in the image used as background for this page); (below) French inscription on the tombstone of a Russian viceconsul

In 1603 Shah Abbas started the first of a series of campaigns against the Ottomans to win back the territories he and his predecessors had lost during the XVIth century. He captured Yerevan (the capital of today's Republic of Armenia). When he received news that an Ottoman army was preparing to move towards the town, he decided to avoid battle, and ordered retreat by destroying and depopulating the villages and towns which the Ottoman army had to cross. Shah Abbas decided to relocate this large multitude of refugees to the provinces around his capital to promote agriculture, crafts and trade. For this reason he showed particular eagerness in deporting the inhabitants of Julfa, a commercial town on the banks of the Aras river. Only a fraction of them arrived at Isfahan where they were settled in a new quarter named after their town of origin. 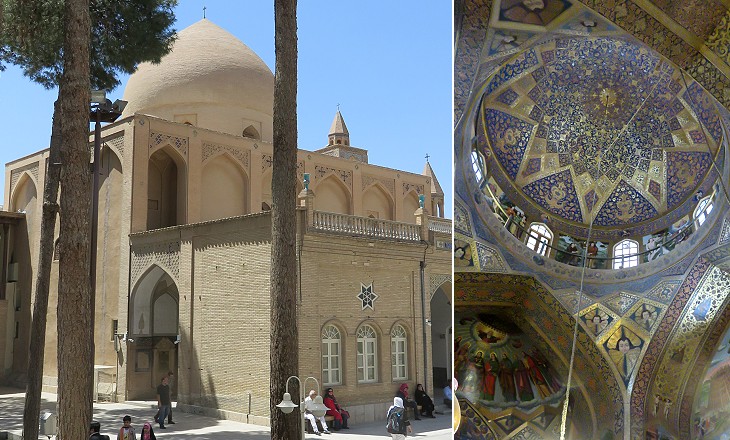 There is an Armenian cathedral a Julfa across the river, which resembles a Mohammadan shrine of the XVIIth century. Inside, the walls are covered with oil paintings in the Italian tradition of that date. Attached to it is a museum, but the treasures are of historic rather than artistic interest. R. Byron
Holy Saviour Cathedral, locally known as the Vank (monastery in Armenian) Cathedral was begun in 1606 and completed in 1664. The contrast between its external and internal decoration is striking. Armenians had to comply with the Muslim rule which does not allow djimmis (Christians and Jews) to exhibit their infidelity in the face of Islam, so the exterior of the cathedral was void of decoration, whereas not an inch of the interior was not gilded or painted (for another example of Christian interior decoration in a Muslim country you may wish to see the monastery of Sumela in Turkey). 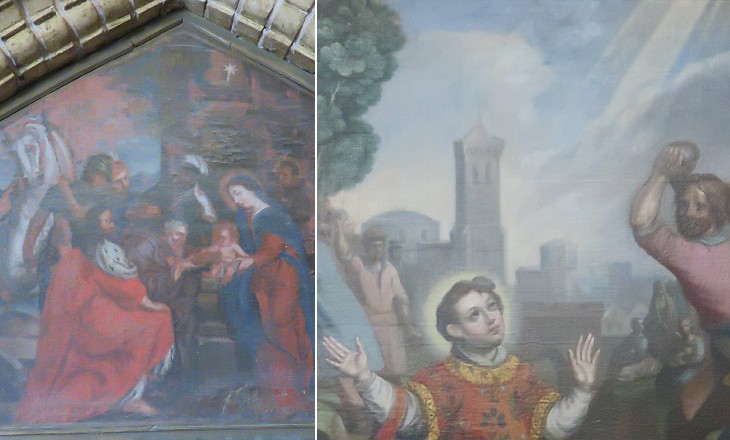 Italian-style paintings: (left) at the entrance to Vank Cathedral; (right) in the Armenian Museum

Pietro della Valle, an Italian traveller who visited Isfahan in 1616 noted that Italian paintings were on sale at Gheisarieh Bazaar. In addition Dutch painters worked at the Isfahan court, so it was not difficult for the Armenians to buy paintings of a Christian subject. The community went through hard times, but persecutions were mainly aimed at extorting money, rather than at forcing conversions to Islam. Similar to the Zoroastrians who lived near Julfa, many left for India where a tiny Armenian community still exists at Kolkata (Calcutta). 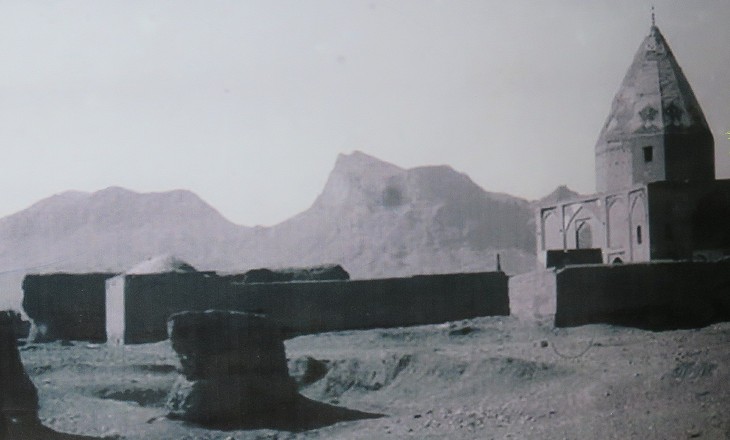 Robert Byron took many photographs during his 1933-34 journey through Persia and Afghanistan. He was mainly interested in architecture and a selection of his photos at the Courtauld Institute of Art in London (it opens in another window) shows many details of domes, portals, minarets, etc. This view of a ruining Seljuk mausoleum in a cemetery near Julfa is rather an exception because of its evocative atmosphere. Byron hated all which could be labelled as picturesque. 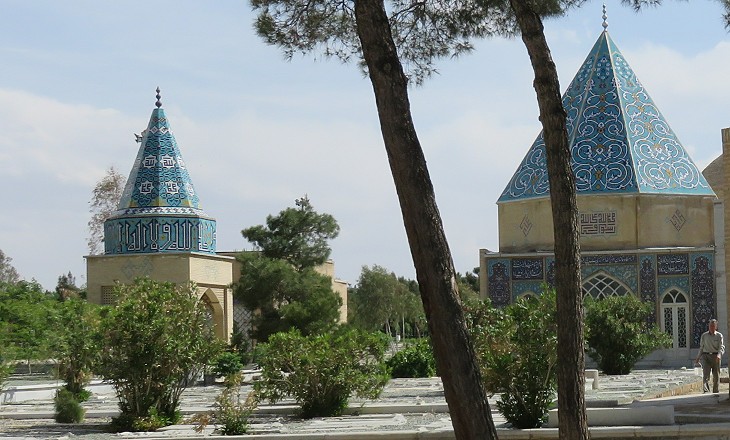 In the past Takht Fulad was the largest cemetery of Isfahan, but its size has been greatly reduced by the development of the city and it is now surrounded by large avenues and lofty apartment blocks. The remaining section has been redesigned and it houses many recent graves while the old mausoleum (XIIIth century) has been given a tile decoration which most likely it never had in the past. In the 1720s Isfahan lost its role as the Persian capital and few other monuments were built there afterwards. Rokn-al-Molk Mosque was built at the end of the XIXth century, presumably to provide the cemetery with a modern mosque. Its portal has an elaborate tile decoration with a mix of colours which departs from the traditional one. Because the size of the prayer hall is pretty small, the courtyard is covered with carpets for the Friday noon prayer. 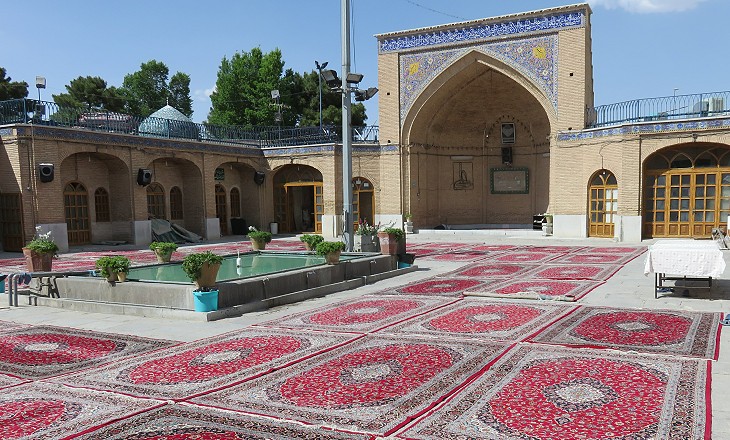