May 3rd, 1812 - We set out early in the morning, and descended the valley towards Adjeloun (Ajlun), which has given its name to the district: it is built in a narrow passage on both sides of the rivulet of Djenne, and contains nothing remarkable except a fine ancient mosque. I left my horse here, and took a man of the village to accompany me to the castle of Rabbad, which stands on the top of a mountain three quarters of an hour distant from Adjeloun.
J. L. Burckhardt - Travels in Syria and the Holy Land - 1822 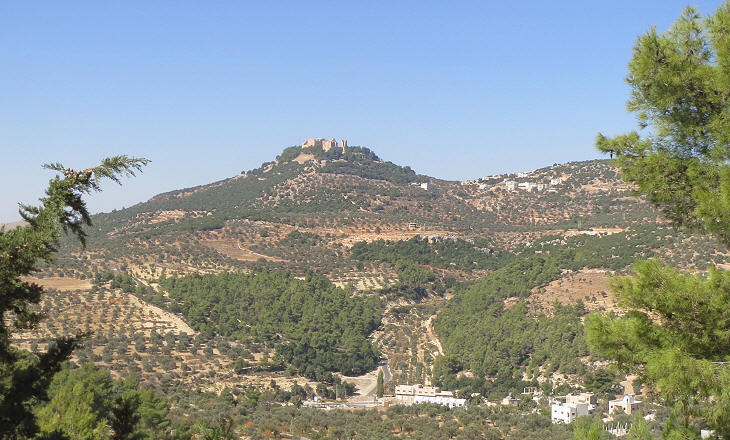 Castle of Rabbad aka Ajlun Castle

It is the residence of the chief of the district of Adjeloun. The house of Barekat, in whom this authority has for many years resided, had lately been quarrelling about it among themselves; the chief, Youssef el Barekat, had been besieged for several months in the castle; he was now gone to the Aga of Tabaria, to engage him in his interests; and his family were left in the castle with strict orders not to let any unknown persons enter it, and to keep the gate secured. I had letters of recommendation to Youssef from the Mutsellim of Damascus; when I arrived at the castle-gate, all the inhabitants assembled upon the wall, to enquire who I was, and what I wanted. I explained to them the nature of my visit, and shewed them the Mutsellim's letter, upon which they opened the iron gate, but continued to entertain great suspicions of me until a man who could read having been sent for, my letter was read aloud; all the family then vied in civilities towards me, especially when I told them that I intended to proceed to Tabaria. Burckhardt 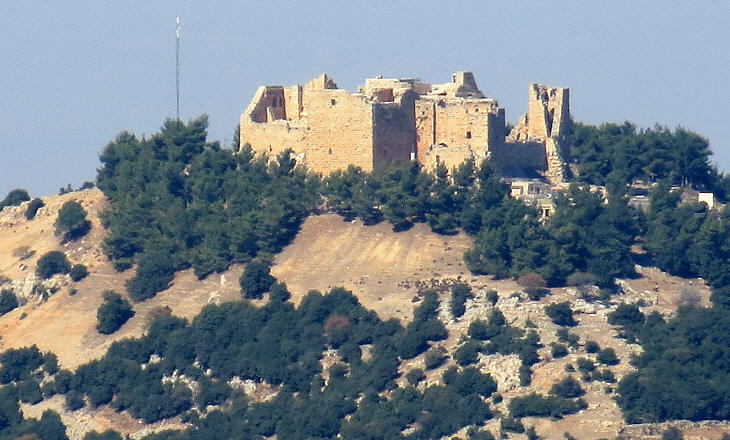 Closer view of the castle

Kalaat Er-Rabbad is very strong, and, as appears from several Arabic inscriptions, was built by Sultan Szelah-eddyn; its date is, therefore, that of the Crusades, and the same as that of many castles in other parts of Syria, which owe their origin to the vigilance, and prudence of that monarch. Burckhardt
Salah ad-Din, known in Europe as Saladin, of Syrian/Kurdish origin became Sultan of Egypt in 1171 and in 1175 he conquered Syria. Initially he followed a policy of coexistence with the Kingdom of Jerusalem and the other Crusader States. 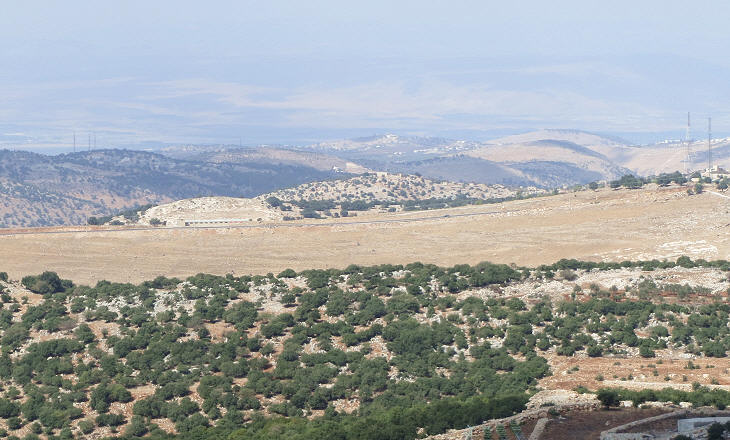 Rabbad is two hours distant from the Ghor, or valley of the river Jordan, over which, as well as the neighbouring mountains, it commands a fine prospect. Burckhardt
The castle was built in 1184-1185 by a nephew of Saladin in order to control the moves of the Crusaders in the River Jordan valley and to protect the route between Syria and Egypt. 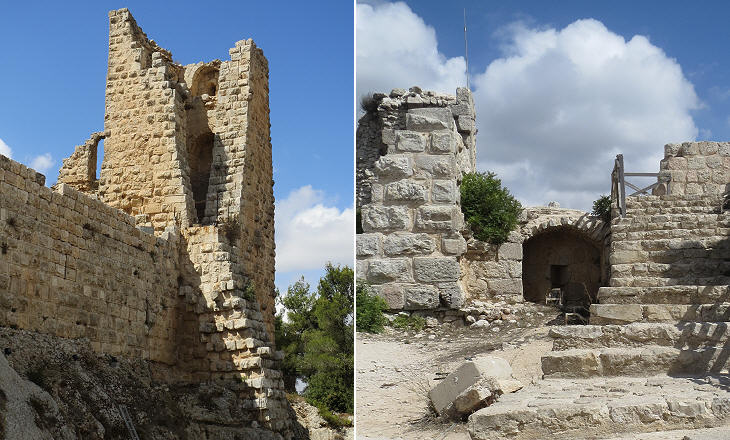 I saw nothing particularly worth notice in it; its thick walls, arched passages, and small bastions, are common to all the castles of the middle ages. Burckhardt
It was probably from this castle that in 1187 Saladin moved with his army to lay siege to Tiberias. He acted in response to the plundering of a Muslim caravan by Raynald of Chatillon, Lord of Kerak, a castle south of Ajlun. The Crusader army sent to the rescue of Tiberias was defeated at Hattin near that town and Saladin conquered Jerusalem.
You may wish to see Belvoir, a Crusader Castle on the western side of the valley or visit Nimrod Castle, north of Tiberias which was built by the heirs of Saladin. 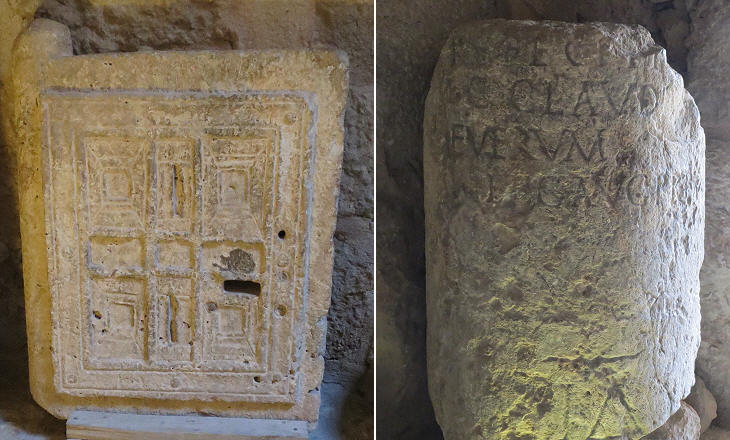 Burckhardt left Ajlun and moved northwards to Om Keis (Umm Qays), in the northern part of the River Jordan valley to see the ruins of Gadara, an ancient Roman town. He was not aware that by taking a detour he could have seen those of Pella, another ancient town, which, similar to Gadara, was part of Decapolis, a loose federation of towns to which the Romans granted some degree of self-government. Views from Pella: (above-southwards) a farmed area at the foot of the hill where Pella is situated; (below-westwards) Beisan / Bet She'an in Israel on the western side of the Ghor, the River Jordan valley; the ruins of ancient Scythopolis, another town of the Decapolis, are situated behind Bet She'an

We laid our plan to go to Kefr Abil, (..) and then return direct to Beisan, visiting on the way the ruins called Tubukat Fahil (Khirbet Fahil), described by Irby and Mangles. The main point was, to ascertain (if possible) the distance between those ruins and Jabesh-gilead, and thus determine whether the former are the remains of Pella. (..) At 9.40 Kulat er-Rubud (Ajlun Castle) came in sight in the southeast, still high above us. (..) At 1.30 we were on what seemed to be the last brow or promontory towards the Ghor. Below, on our left, on a low mound in a nook among these higher hills, we now saw, hardly a mile distant, a site of ruins which our guides knew only as el-Jerm. We were at this time just an hour and three quarters from Kefr Abil, and this distance accorded well with Pella. (..) Crossing a ravine in the plain, we came in fifteen minutes to the ruins of Fahil; for so the name was given to us by people on the spot.
Edward Robinson - Later Biblical Researches in Palestine in the Year 1852 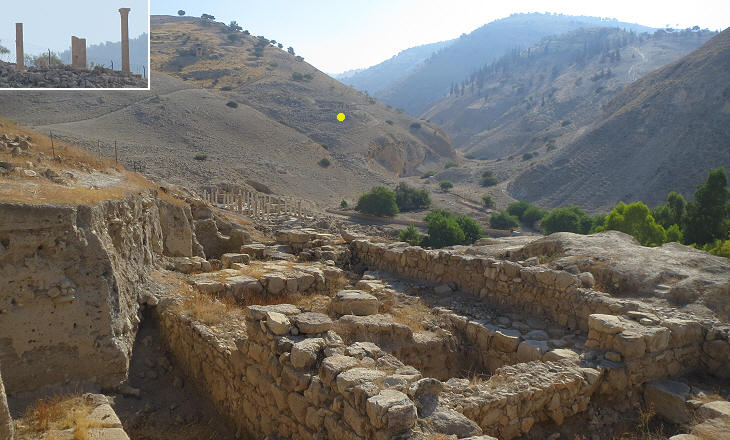 Canaanite temple in the foreground and the lower town of Pella in the background; the yellow dot indicates the location of the Eastern Church, which is shown in the inset

As we approached from the north, there were in the low plain and on our left numerous foundations with many broken columns. Ascending the mound of the city from the east, we came at once to the remains of a building, of which the portal was broken down and scattered around; within were three granite columns. Before it lay a sculptured slab of limestone. (..) The edifice may have been a temple, or perhaps a church. The surface of the hill is a level area of four or five acres in extent, covered with the foundations of houses, and with heaps of hewn stones intermingled with fragments of columns. We saw no bevelled stones. (..) We noticed no traces of city walls. Robinson
First major excavations started in 1966, but because of the 1967 war and ensuing political tensions they could be resumed only in 1979. Australian archaeologists found out that the hill had been inhabited since prehistory and they uncovered a Canaanite temple dated circa 1650 BC. The name Pella was given to the settlement after the conquest of the region by Alexander the Great in 332 BC, Pella being the capital of his Macedonian kingdom. 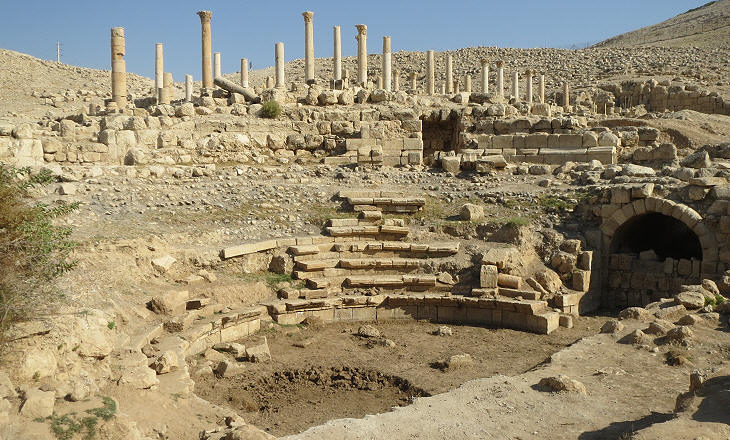 One singular Tell is on the southeast quarter; it looks almost as if cut away by art in order to form an acropolis for the city. Directly under its southwestern base is (..) a large and noble fountain, which sends off a mill stream down the valley. (..) The spot was first visited by Irby and Mangles, March 12th 1818. They approached it from the west; and found there in the plain "the ruins of a square building, with a semicircular end, which appears to have been surrounded by columns". (..) Such are the ruins and the main topographical features of Fahil. (..) After completing our examination of the remains, in view of these considerations I ventured to express to my companions on the spot the opinion, in which they concurred, that we were standing amid the ruins of the long lost and long sought Pella. It is at such moments that the traveller has his reward. (..) No such idea had been suggested to the minds of Irby and Mangles, the discoverers of the ruins; and no Frank traveller had since visited the spot. Robinson
The Roman centre of the town was most likely in a small valley crossed by a spring which granted a continuous supply of water because there is evidence of baths and of a fountain. The centre included an odeon (a small theatre) and other buildings, such as tribunals, the columns of which were used for the construction of a very large church. 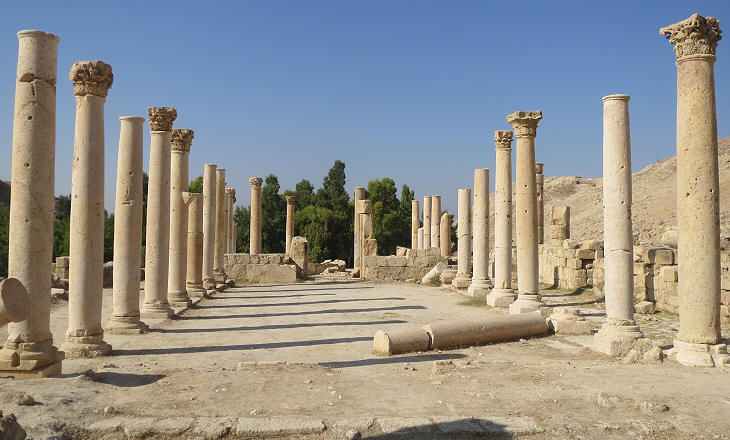 The Middle Church is so named because it is located between two other churches: the Eastern Church at the site where the spring originated and the Western Church on the other side of the hill of Pella. The Middle Church has the shape of a basilica with three naves, the central one being very large. When the first British travellers visited Pella the site was unpopulated, but in the 1960s Jordan authorities had to evict the inhabitants of a small village to let archaeologists excavate it. 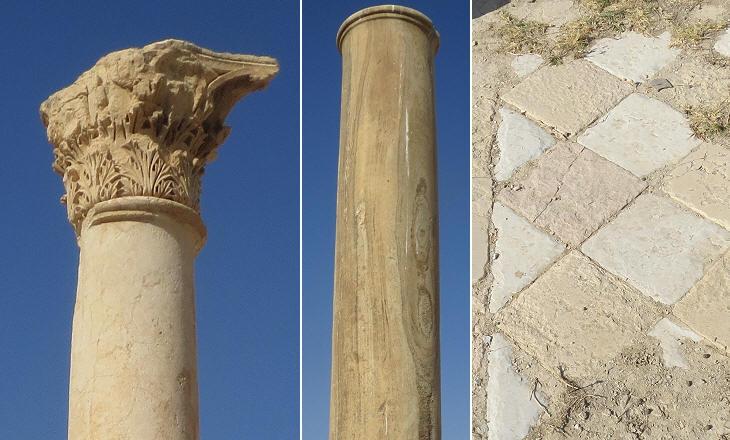 The Middle Church was built with materials which were part of IInd century AD buildings. Cipollino, a green marble from Greece, was made very popular by Emperor Hadrian when he decorated the Library of Athens using this stone rather than white marble. All the towns of the Empire decided they wanted to embellish their monuments with some cipollino columns. 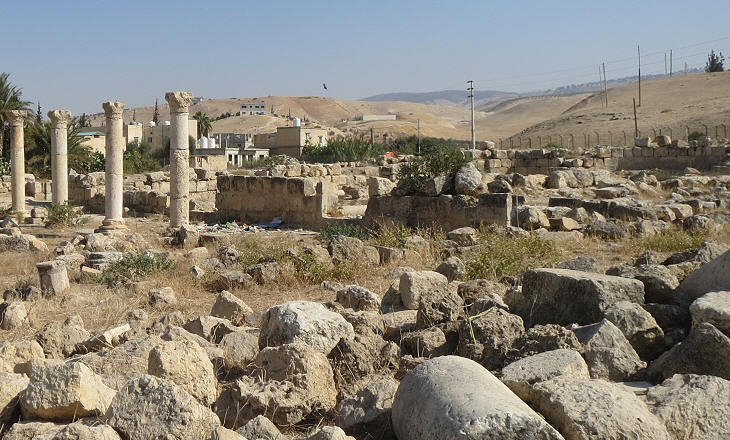 A third large church stood at the western foot of the hill, at the entrance to the town from the valley. Unlike the Middle Church, columns from previous buildings were utilized only for a portico in front of the church. Pella was conquered by the Arabs in 635, one year before the whole of the region, including Syria, fell to the invaders. The decline of Pella was rapid because there is no evidence of the churches being turned into mosques. A major earthquake struck the town in 747 or 749; it was probably the last blow to its prosperity.
The image used as background for this page shows a detail of a capital at the Middle Church.