An Excursion to Montepulciano
(Detail of the Cathedral of Orvieto)

If you came directly to this page you may wish to see a page with an introduction to this section and a map of Val di Chiana first. 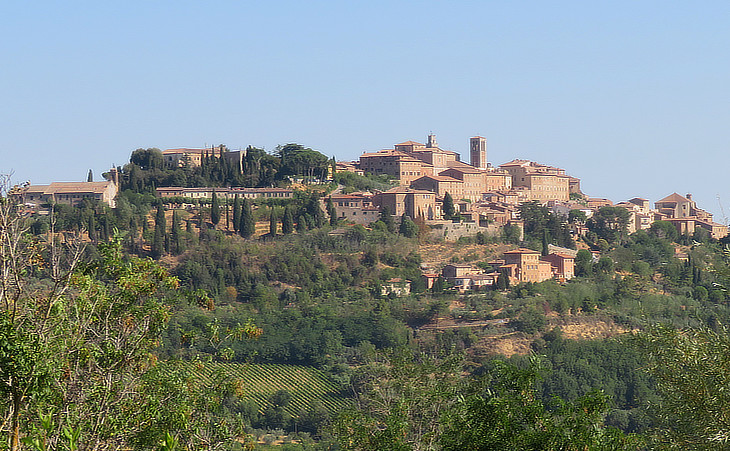 View of the southern, higher part of Montepulciano with the bell tower of the Cathedral

Here are hill and vale, rock and wood, towns and castles on picturesque heights, broad islet-studded lakes, and ranges of Alpine snow and sublimity; and if the ocean be wanting, it has no unapt substitute in the vast vale or plain of Chiana - a sea of fertility and luxuriance; while all is warmed and enriched by the glowing sun of Italy, and canopied by a vault of that heavenly blue, that reflects beauty on everything beneath it. It is the sort of scenery which wins rather than imposes, whose grandeur lies in its totality, not in particular features, where sublimity takes you not by storm, but retires into an element of the beautiful. (..) Montepulciano is a city of some three thousand inhabitants, girt by walls of the middle ages, and cresting a lofty height at the northern extremity of this range of hills. It is built on so steep a slope, that it would seem that the architects of the Cathedral had leagued with the priests to impose a perpetual penance on the inhabitants by placing it at the summit of the town.
George Dennis - The Cities and Cemeteries of Etruria - 1878 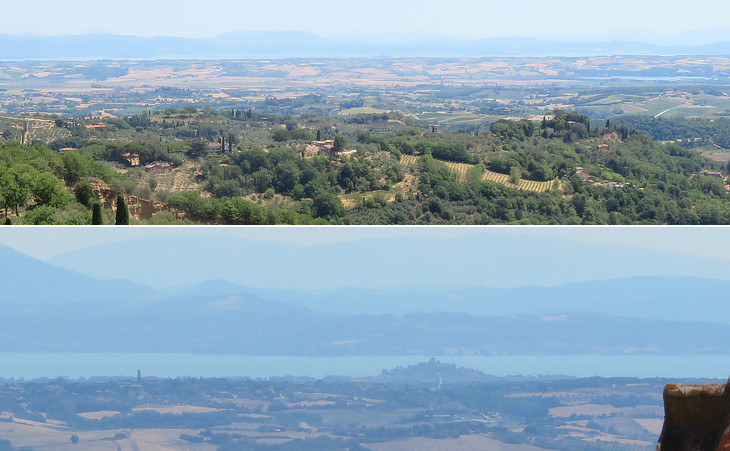 (above) View towards Lake Trasimeno and the lake of Montepulciano; (below) Castiglione del Lago

Montepulciano commands a most extensive view of the vale of the Chiana, which, (..) here swells out and unfolds its beauties in a wide expanse of fertility; stretching northward to the walls of Arezzo and the tower-crowned height of Cortona; and eastward beyond the twin lakes, to the broad and bright-bosomed Thrasymene, and to the very base of the hoary Apennines. This was for ages a dreary swamp, proverbial for pestilence. (..) But that is past, and now the zephyr brings Health in its breath, and gladness on its wings. It is now one of the most fertile tracts in Europe, scarcely less healthy than the heights around it. This surprising change, which had been aimed at in vain for two centuries, has been effected in the last eighty years by filling up the swamp with alluvial deposits; and instead of slime and putrid water, it now overruns with oil and wine, and all the wealth of a southern soil, and in place of the fish and wild-fowl, for which it was famed of old, are milk-white oxen, fair as the steers of Clitumnus. Dennis
From behind the cathedral, the view is quite glorious, over the lakes of Montepulciano and Chiusi and the long expanse of Thrasymene to the delicate mountains around Perugia.
Augustus J.C. Hare - Cities of Northern and Central Italy - 1876 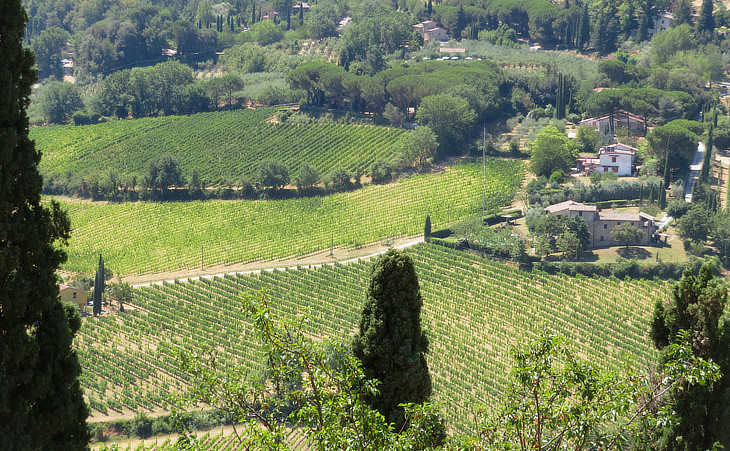 The fame of this town and country is owing chiefly to the delicious wine known by the name of Montepulciano.
Thomas Nugent - The Grand Tour - 1749
The position of Montepulciano, surrounded by medieval walls, and perched upon a lofty height, is highly picturesque. Let not the traveller omit to pay his devoirs to the liquid "manna of Montepulciano," the monarch of Tuscan, if not of all other wines, as Bacchus and Redi* have pronounced it - "Montepulciano d'ogni vino è il Re". Dennis
The wines of Montepulciano are celebrated throughout Italy, and especially that called Manna, the "d'ogni vino il re" of Redi.
John Murray - Handbook for Travellers in Central Italy - 1853
* A quote from Bacco in Toscana, a poem praising the Tuscan wines which was written in 1685 by Francesco Redi, a physician and entomologist from Arezzo. Today the best wine of the district is referred to as Vino Nobile di Montepulciano DOCG, the highest classification of an Italian wine. 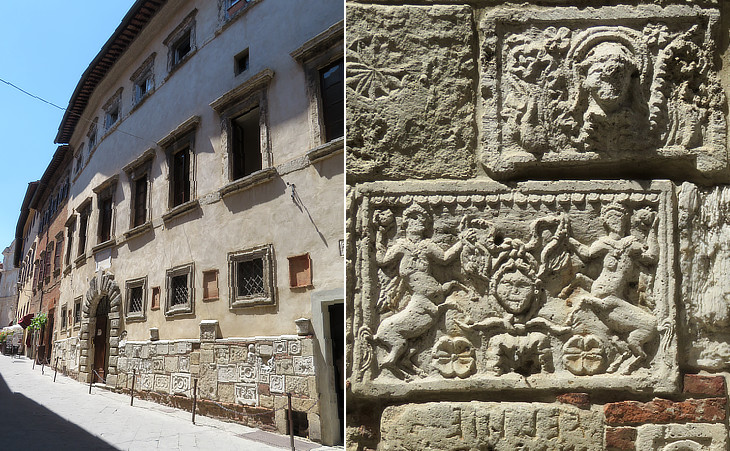 (left) Palazzo Bucelli (along the Corso); (right) some of the inscriptions and reliefs which decorate it: that depicting female centaurs is identical to that of a cinerary urn at Chiusi

A collection of monuments, Etruscan and Latin, discovered in the vicinity, is preserved in the Palazzo Buccelli. Here are sepulchral inscriptions, and reliefs from sarcophagi and urns, embedded in the facade - a prodigal display of antiquarian wealth, which is lost on the eyes of the natives, but has the advantage of attaching the relics to the spot. In the reliefs are centaurs, gorgons, souls on horseback - but nothing of extraordinary interest. Some of the inscriptions are remarkable for having Etruscan names in Roman letters. Dennis 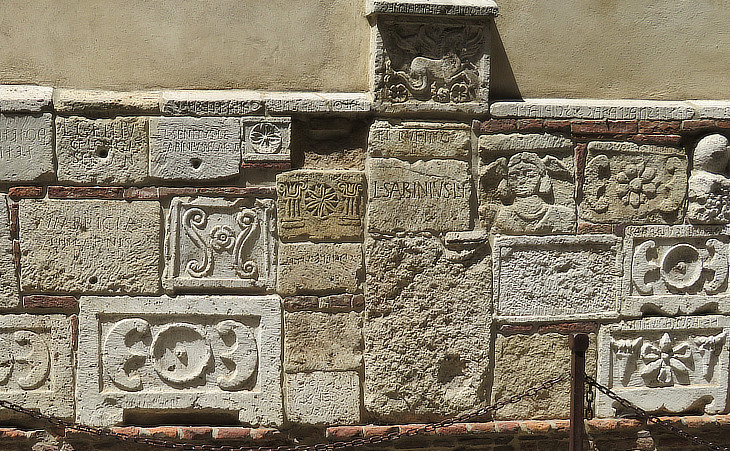 Palazzo Bucelli: other ancient reliefs (another one is shown in the image used as background for this page)

The Palazzo Buccelli contains several Etruscan antiquities found in the neighbourhood, which confirm the opinion that the town occupies the site of an Etruscan city. The facade of this palace has built into it several bas-reliefs, and numerous fragments of Etruscan and Latin inscriptions. Murray
Montepulciano is supposed to be an Etruscan site. Its situation on a lofty and isolated height, and the remains discovered in its neighbourhood, favour this opinion. Some have ascribed its foundation to Porsena. Dennis
Pietro Bucelli (1684-1754), a local nobleman, gathered an interesting collection of Etruscan artefacts which he found in the environs of Montepulciano and Chiusi. His heirs eventually donated it to Grand Duke Leopold I. In that same period some noblemen founded Accademia Etrusca at Cortona to collect antiquities and promote studies on the Etruscans. 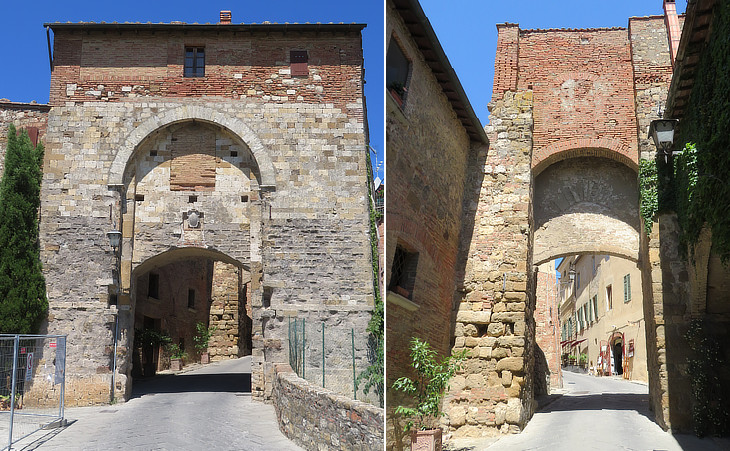 Porta delle Farine at the south-eastern end of the town; "Farine" (Engl. flours), because of nearby mills: (left) outer gate; (right) inner gate with evidence of the use of ancient stones

The earliest record we have of Montepulciano is in the year 715 after Christ, when it was called Castellum Politianum. Its ancient name must remain a matter of conjecture, till fortune favours us with some local inscription, throwing light on the subject. No vestiges of ancient walls are now extant, nor are there any tombs open around the town. Yet excavations are occasionally made in the neighbourhood, and yield cinerary urns, the usual black pottery, painted vases of different epochs, and bronzes. Dennis
Porta delle Farine is an excellent and intact example of a XIIIth century double gate. It testifies to the rivalry between Montepulciano and Siena. The former sought the support of Florence and this led to repeated conflicts. The gate was built when the town was controlled by Siena. 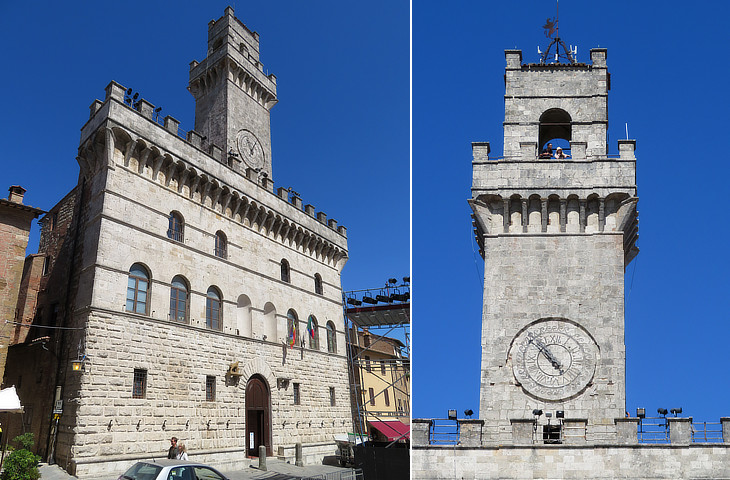 The palace was built towards the end of the XIVth century and its aspect brings to mind that of Palazzo Vecchio at Florence. Montepulciano in its efforts to free itself from Siena sought also the help of Orvieto and Perugia. The XIVth century was characterized by conflicts among the local noble families, until the Del Pecora family became rulers of the town. Towards the end of the century it became a possession of the Republic of Florence, which at approximately the same period acquired the control of Arezzo, Castiglion Fiorentino and Cortona. The border between the Tuscan/northern section of Val di Chiana and the Umbrian/southern section was fixed at that time and it lasts to our days. 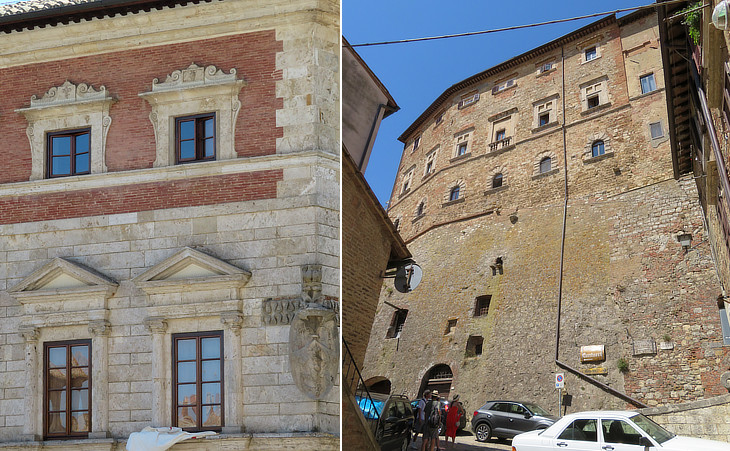 Antonio da Sangallo the Elder is credited with having initiated the construction of the palace in 1519. He set his residence at Montepulciano to supervise the construction of Madonna di S. Biagio, a sanctuary outside the walls of the town. He was an expert military architect (see the fortress named after him at Civita Castellana) and knew how to build strong walls to cope with the unevenness of the ground and to create room for large cellars. The highest storey with its small square windows was added in the XVIIth century. 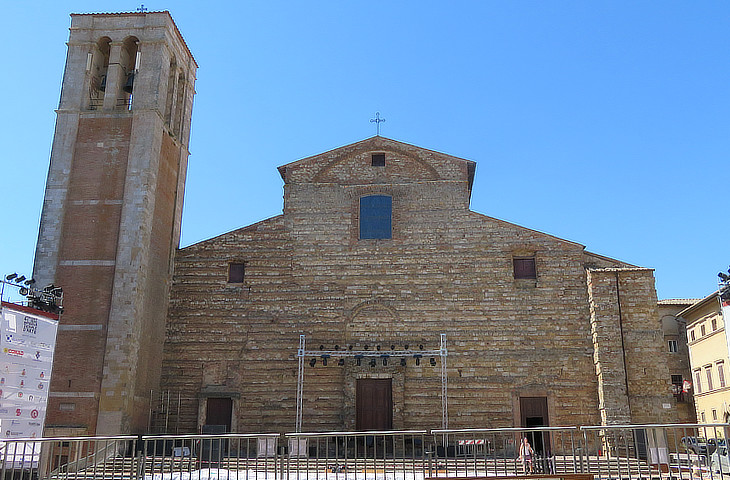 Cathedral in the southern side of Piazza Grande

The town of Montepulciano was made the see of a bishop by Pius IV in 1561. Nugent
Montepulciano is an entirely mediaeval city. (..) It is one of the cleanest and handsomest of the completely hill-set towns. Its broad streets are well paved and contain many old palaces. (..) At the top of all is the piazza, with the unfinished Cathedral, the handsome machicolated Palazzo Pubblico, another old palace, and a well. Hare
Notwithstanding its population and its economic importance medieval Montepulciano was not a bishopric see; the town and its environs were partitioned between the dioceses of Chiusi and Arezzo. Cardinal Giovanni Ricci (1497-1574) from a family of Montepulciano (and the first landlord of Villa Medici al Pincio), promoted the cause of his hometown and the main church became its cathedral. The building was enlarged and redesigned, most likely by Ippolito Scalza, an architect from Orvieto, but, similar to what occurred in many other towns of Tuscany, e.g. at Cortona, the construction of its façade was never completed. 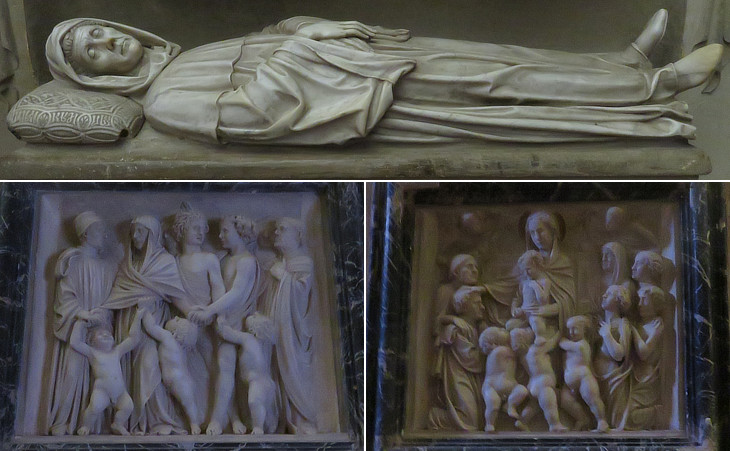 Cathedral: (above) Dismantled funerary monument of Bartolomeo Aragazzi; (below) reliefs from the monument: (left) Aragazzi meets his relatives in Heaven; (right) the Virgin Mary blesses him

The Cathedral contains (..) on the left, the tomb of Bartolomeo Aragazzi, 1427, the secretary of Martin V., who commissioned Donatello and Michelozzi to make his monument. This, a grand figure in a cowl, is only part of the original monument, which was pulled down and never properly restored when the church was rebuilt. Two bas-reliefs of Donatello against the pillars of the nave were taken from it, and part of the base is now the High- Altar. Hare
Vasari attributed the tomb to Donatello, but today the monument is regarded as a work by Michelozzo (1396-1472), a Florentine architect and sculptor to whom also the completion of Palazzo Comunale and the design of the façade of S. Agostino are attributed. 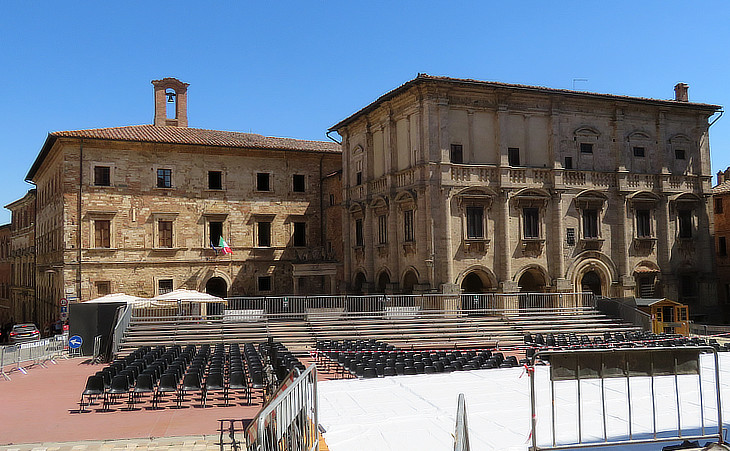 Capitano del Popolo was a magistrate elected by the merchants and the representatives of the guilds to promote their interests in opposition to those of the families of noble origin. This magistrate was active in many Italian medieval towns, e.g. Orvieto and Perugia.
Roberto de' Nobili was made cardinal at the age of twelve by his great-uncle Pope Julius III and his father held important positions in the Papal army and government. The fortunes of the De Nobili were closely linked to those of the Pope and they rapidly declined after his death in 1555. They had time enough to start building a fine Renaissance palace in the main square which is generally attributed to Jacopo Barozzi, aka il Vignola, a leading architect of his time (see Palazzo Farnese di Caprarola). Pope Julius III made cardinal also Fulvio della Corgna, a son of his sister Jacopa. The della Corgna built fine palaces at Castiglione del Lago and Città della Pieve in the Papal section of Val di Chiana.
Pope Marcellus II, i.e. Cardinal Marcello Cervini, the successor of Pope Julius III, belonged to a family from Montepulciano, but he died 22 days after his election. The Cervini family palace is situated along the Corso. 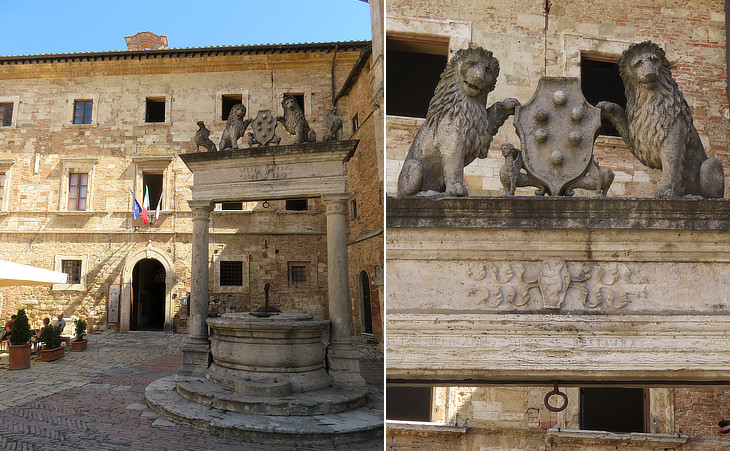 Piazza Grande: well with the Medici coat of arms, two lions, symbols of Florence and two small griffins, symbols of Montepulciano; it is attributed to Sangallo the Elder