Orvieto - Cathedral and Papal Palace
(Detail of the Cathedral of Orvieto)

If you came directly to this page you may wish to read a page on the medieval monuments of the town first.
Orvieto is a large strong city, on a steep hill, surrounded on every side with rocks and precipices (..) and has one of the handsomest cathedrals in Italy.
Thomas Nugent - The Grand Tour - 1749 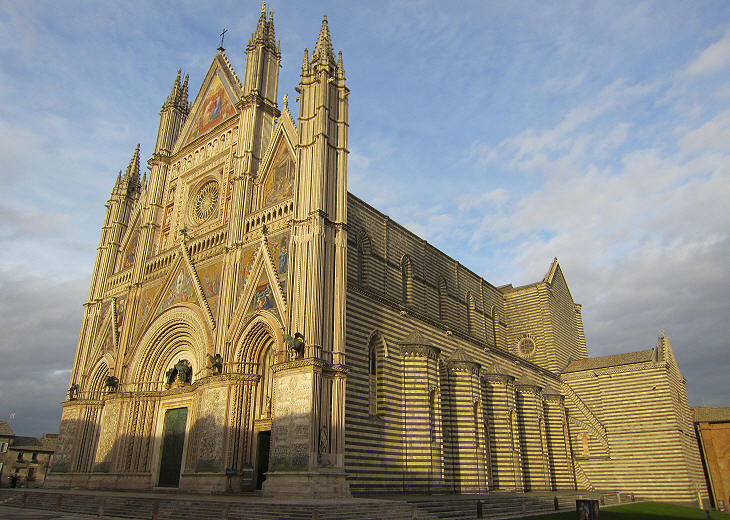 On November 13, 1290 Pope Nicholas IV laid the first stone of the Cathedral of Orvieto. The construction of such a large church was supported by the magistrates of the town who wanted to provide Orvieto with a cathedral which could compete with that which Siena, the arch-rival town, was in the process of completing.
The enterprise had a religious purpose too; in 1264 Pope Urban IV had instituted the festivity of Corpus Christi when he resided at Orvieto and the new building was expected to house the linens with blood stains of the Miracle of Bolsena which prompted the papal decision. 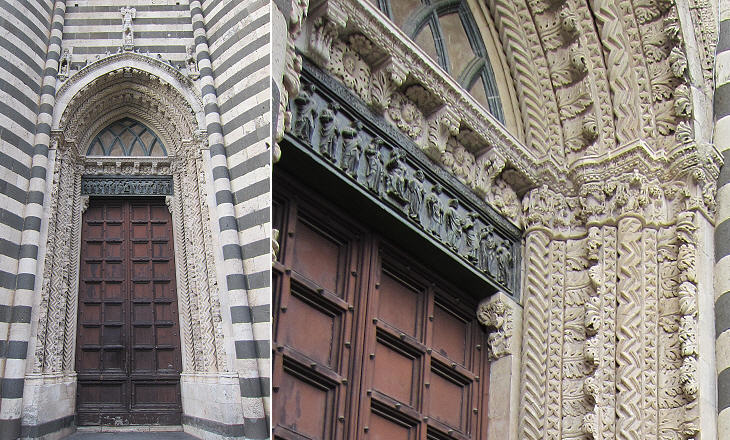 The new cathedral was built on the site of a previous one and most likely the elaborate portal on its southern side belonged to that church. It is placed between two of the five small semicircular chapels which project from the side wall. They strengthened the structure of the wall and at the same time they had a decorative effect. 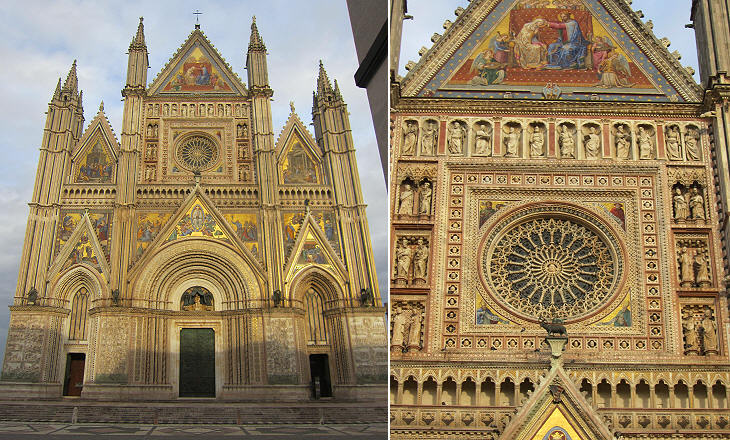 Cathedral: (left) façade; (right) rose-window (the image used as background for this page shows a detail of the left portal)

In 1308 the completion of the cathedral was entrusted to Lorenzo Maitani, an architect and sculptor, who is believed to have been involved also in some of the reliefs which decorate the façade. The design of the façade was inspired by that of the Cathedral of Siena and it is regarded as a masterpiece of Italian Gothic style. The presence of large mosaics on a golden background was typical of the great basilicas of Rome (e.g. S. Paolo fuori le Mura). Unfortunately the original mosaics wore out and were replaced by new ones in the XVI, XVII and XVIIIth centuries or were badly restored in the XIXth century.
A high concert of colour is the densely carved front, richly covered with radiant mosaics. The old white marble of the sculptured portions is as softly yellow as ancient ivory; the large exceedingly bright pictures above them flashed and twinkled in the glorious weather. Henry James - 1877. 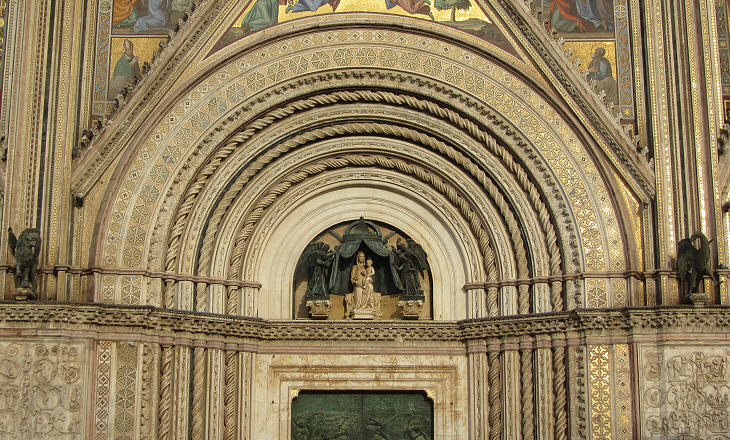 Under Maitani's superintendence were employed no fewer than forty architects, sculptors, and painters from Florence and Siena, who settled at Orvieto and were formed into a corporate body with a separate head for each craft.
Sir Thomas Graham Jackson - Gothic architecture in France, England, and Italy - 1915.
The completion of such a large enterprise was made possible by the creation of Opera Pia Sanctae Mariae or Opera del Duomo, a foundation in charge of the construction of the Cathedral, similar to that founded in Florence in 1296 for the same purpose. Many wealthy citizens made donations to Opera del Duomo, rather than to ecclesiastical authorities. This body is still in charge of the maintenance of the building. The Cathedral was dedicated to St. Mary of the Star; the dedication was changed to St. Mary's Assumption in the XIXth century. 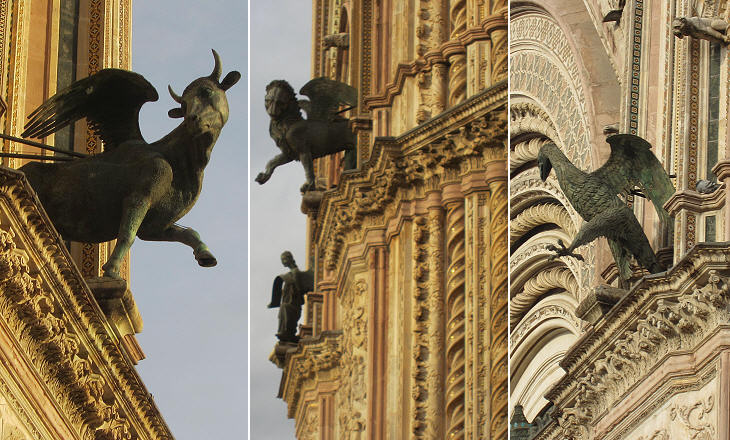 Cathedral: bronze symbols of the Evangelists

Four great bronze statues depicting the symbols of the Evangelists project from the façade. They were part of the complex iconographic project which was developed for the façade which included the mosaics and four panels of reliefs. The choice of using bronze statues was perhaps suggested by those at Palazzo dei Priori in Perugia, because usually these symbols were sculptured at the corners of the frame surrounding the rose window as at Spoleto. 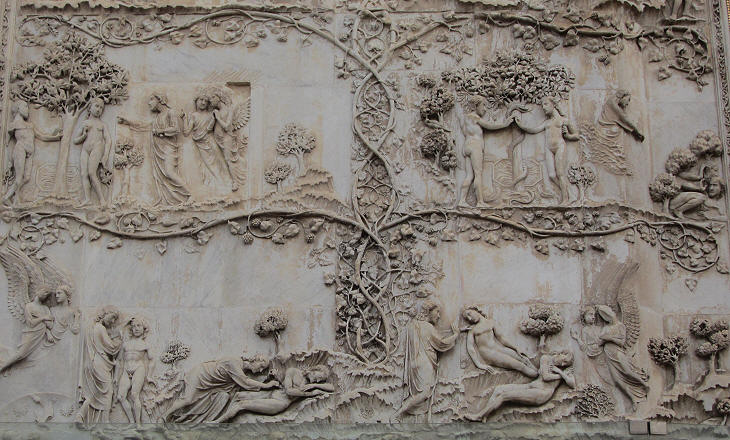 Cathedral: decoration of the first pillar: episodes from the Book of Genesis

Summa Theologica is a compendium of all the main theological teachings of the Catholic Church written by St. Thomas Aquinas in 1265-1274. The four panels of reliefs which decorate the pillars at the sides of the portals could be called a Summa Theologica in marble as they were meant to illustrate key aspects of the Christian faith.
The first one starts from the beginning as it portrays episodes from the Book of Genesis. It answered the basic questions of cosmogony: how the universe was created? where do we come from? 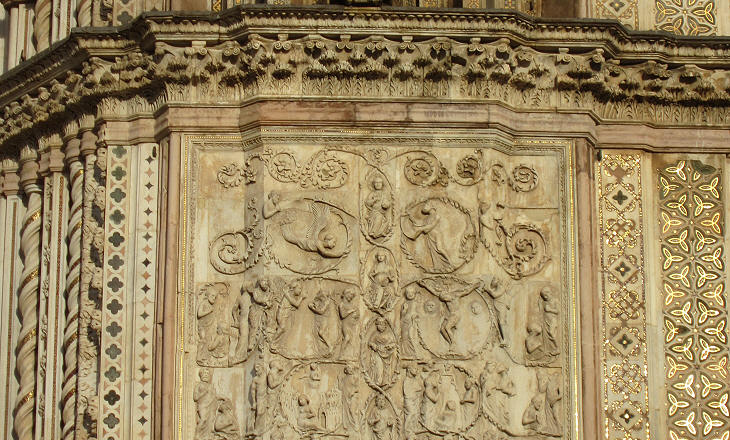 Cathedral: decoration of the second pillar: episodes from the Old Testament and the Crucifixion

The second panel is a sort of link between the Old and the New Testament; it does not show some very popular and very often represented episodes of the Old Testament such as the Sacrifice of Isaac, but it focuses on episodes and personages prophesying the advent of a Messiah.
The image above shows the variety of marbles which were employed to decorate the frames of the panels. Companies of artists were sent to Rome to seek the most suitable stones. 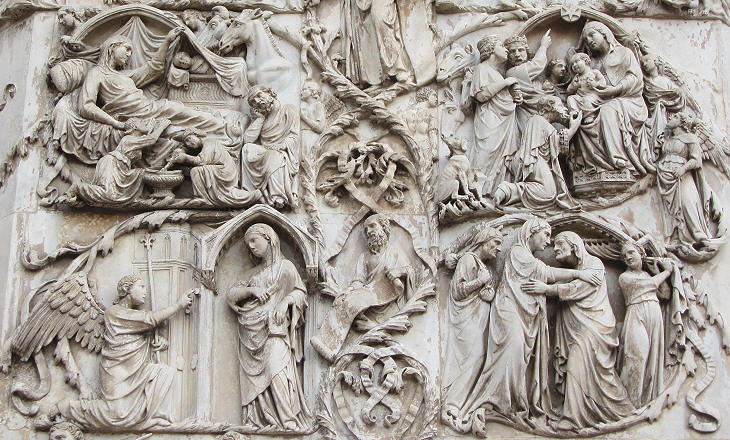 Cathedral: decoration of the third pillar: episodes from the Gospels

The third pillar was decorated with sixteen episodes of the life of Jesus which the believers were very familiar with from the Annunciation to the Crucifixion. In all four panels the episodes were framed either by branches and leaves of ivy and vine (first and fourth pillar) or by a complex of acanthus leaves and small portraits of prophets (second and third). 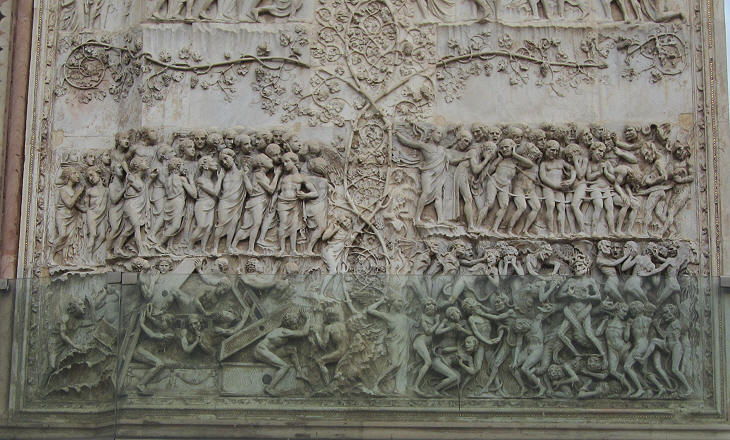 Cathedral: decoration of the fourth pillar: the Last Judgement

Believers were asked to follow the moral teachings of the Church as set in the Ten Commandments or in the parables of Jesus. They were told their behaviour would be judged and they would receive divine reward or punishment. The fourth panel illustrated the phases of the Last Judgement. The last episode portrayed the sinners being brought to Hell by horrible devils, a most terrifying scene. In Orthodox churches this episode was painted on the rear façade so that it was the last to be seen, a sort of final warning not to sin (you may wish to see the Last Judgement at Monastery of Agios Nikolaos Anapafsas in Greece). 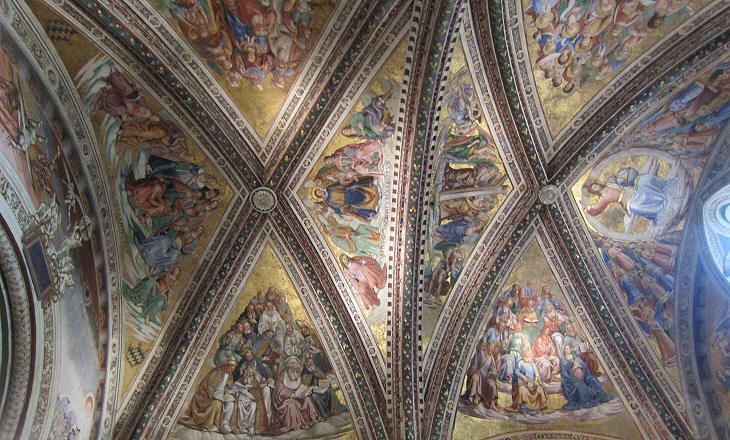 The Cathedral has the traditional Latin cross shape, but it does not have a traditional transept. Its two minor arms consist of a large chapel. Cappella del Corporale, the left one, houses the reliquary with the holy linens. Cappella di S. Brizio, the right one, was completed in 1444 and it is famous for its fresco decoration, which was started by Beato Angelico (and his assistants, including Benozzo Gozzoli) in 1447-1449 and was completed by Luca Signorelli in 1504. 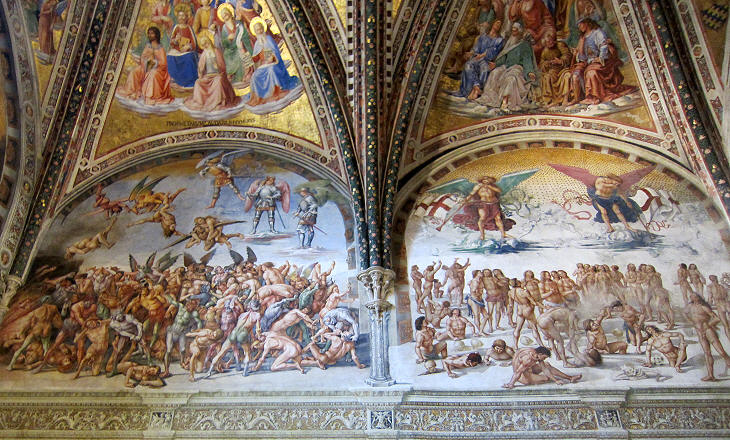 Cappella di S. Brizio: the Prophets by Beato Angelico (upper left corner) and other frescoes by Luca Signorelli depicting the Doctors of the Church (upper right corner), Hell (left) and the Resurrection of the Flesh (right)

The agreement signed by Signorelli explicitly stated that he should follow the advice of theologians in the representation of the various phases of the Last Judgement. The dramatic way he portrayed these phases is an indication of the tension on moral and religious issues which existed in Italy at the time of Pope Alexander VI. Basically it was caused by the contrast between the revival of interest in Classical antiquity and philosophy and calls for Christian renewal. 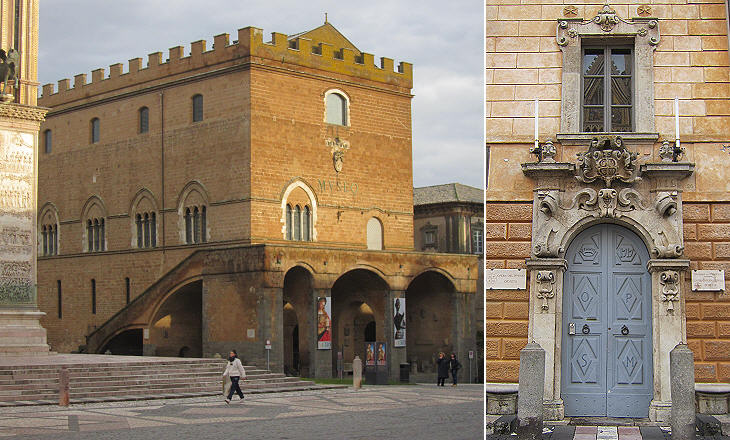 In 1154 Adrian IV was the first pope to reside in Orvieto and his example was followed by many others. A series of palaces was built to the south of the Cathedral, the last one (Palazzo di Soliano) at the initiative of Pope Boniface VIII in 1297. The palaces were poorly kept in the following centuries. Bishop Stephen Gardiner paid a visit to Pope Clement VII who resided in Orvieto after the 1527 Sack of Rome, and he reported to King Henry VIII: The Pope lieth in an old palace of the bishop's of this city, ruinous and decayed, where, when we came to his privy-chamber, we passed three chambers, all naked and unhanged with the roofs falling down. And as for the Pope's bed-chamber, all the apparel in it was not worth twenty nobles, bed and all. (from A. J. C. Hare - Days near Rome - 1875). Palazzo Soliano: (left) southern side; (centre) detail of a window; (right) front with the coat of arms of Pope Paul III

Having lost their original purpose of housing the Papal Court the buildings were adapted to other uses and modified according to new fashions. In the late XIXth century architect Paolo Zampi redesigned the papal palaces in an attempt to bring them back to their XIIIth century aspect. They now house the Museum of the Cathedral.