Castiglione del Lago
(Detail of the Cathedral of Orvieto) 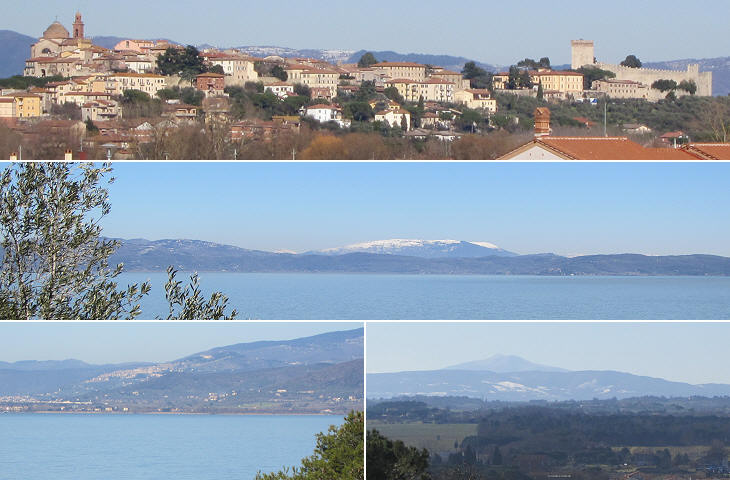 A range of very low hills separates Val di Chiana from Lake Trasimeno and in the past it marked the border between the Grand Duchy of Tuscany and the Papal State. In antiquity Lake Trasimeno covered a larger surface and the peninsula where today Castiglione stands was a small island which eventually was linked to the shore by a dam built by the Romans. Lake Trasimeno has shallow waters, it does not receive any major streams and it does not have an outlet; its level depends on rainfalls and on careful environmental protection. 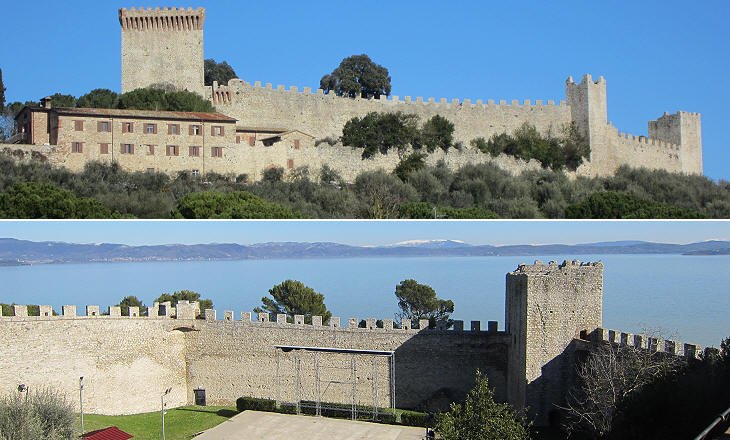 Castiglione owes its name to a small castle built by Emperor Frederick II in the XIIIth century. Although the heraldic symbol of that emperor was an eagle, in Italy the lion was associated with the Empire and it is possible that a relief or a statue of a lion led to calling Castel-Leone the castle, hence Castiglione. Because several towns in Italy have this name it is officially called Castiglione del Lago. The castle was strengthened in the early XVIth century and it retains a coat of arms of Pope Julius II which you can see in a page covering several papal fortresses. 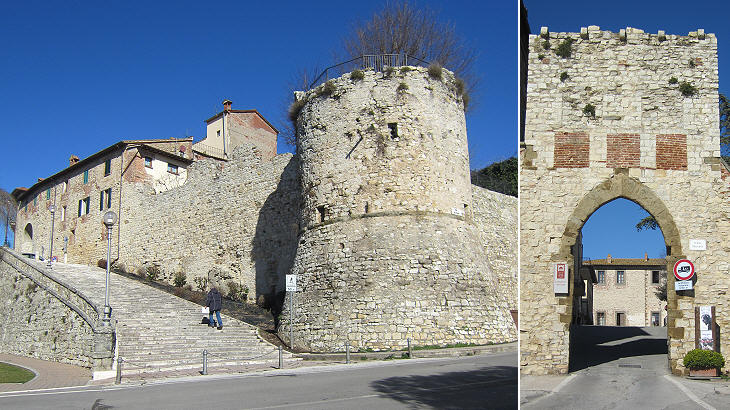 Many ancient maps of central Italy named Lake Trasimeno as Lake of Perugia, because this town controlled the territory surrounding the lake, including Castiglione. The control of the castle, which is located on the western shore of the lake, meant for Perugia control over the whole lake, which was very rich in fish. 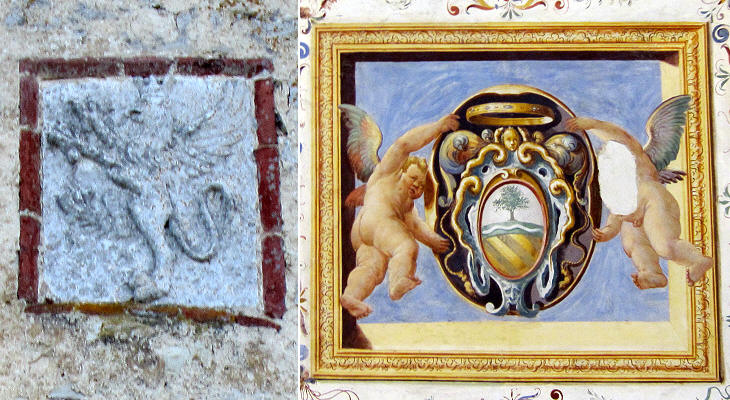 The link between Castiglione and Perugia was severed in 1550 by Pope Julius III. He was born at Monte San Savino, a small town in the Tuscan section of Val di Chiana and for a time he lived at Montepulciano, a larger town still in Tuscan Val di Chiana where Antonio da Sangallo the Elder built a fine palace for him. Pope Julius III, following the steps of his predecessor Pope Paul III who managed to provide his relatives with many possessions, obtained the fiefdom of Monte San Savino for his brother Baldovino from Cosimo I, Duke of Florence and he assigned Castiglione and its territory to his sister Jacopa and her son Ascanio della Corgna. 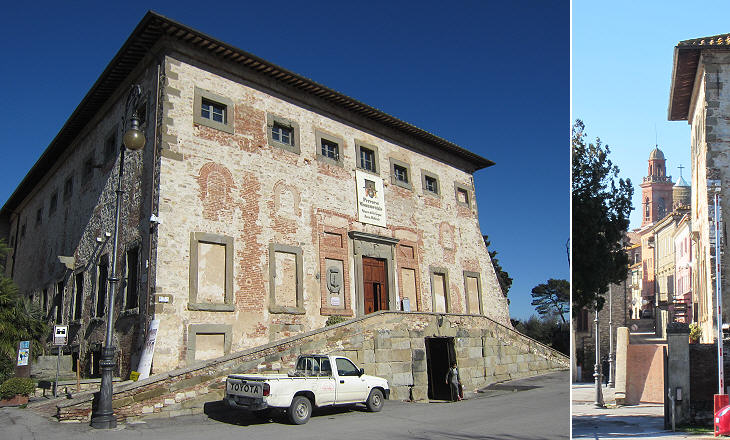 Ascanio della Corgna and his brother Cardinal Fulvio turned Castiglione into a small Renaissance town. The old medieval buildings were wiped out to make room for a neatly designed town structured along a main street linking the main (western) gate to a large central square. Here a palace was built by Galeazzo Alessi, an architect who had built at Orvieto the palace of Cardinal Tiberio Crispo following an initial project by Antonio da Sangallo the Younger. 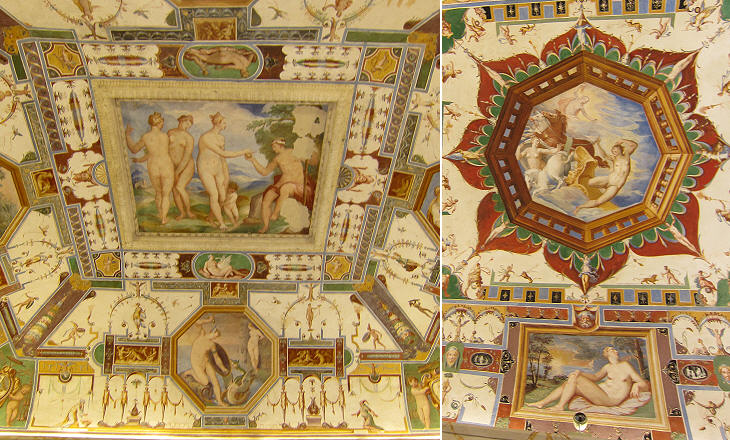 Frescoes in Palazzo della Corgna by il Pomarancio (Nicolò Circignani), a painter best known for his frescoes depicting martyrdoms: (left) The Judgement of Paris (a detail of this fresco can be seen in the image used as background for this page); (right) The Fall of Phaeton

The fortunes of the della Corgna declined when their uncle died. In 1556 Pope Paul IV imprisoned Cardinal Fulvio and Ascanio fled to Naples. He was a valiant man of arms and he helped Don Fernando Alvarez de Toledo, Spanish Viceroy of Naples in a war against the Pope. In the following years he held several military positions for King Philip II of Spain and eventually in 1559, soon after the death of Pope Paul IV, he returned to Castiglione. In 1563 he was appointed Marquis of Castiglione and nearby Città della Pieve. 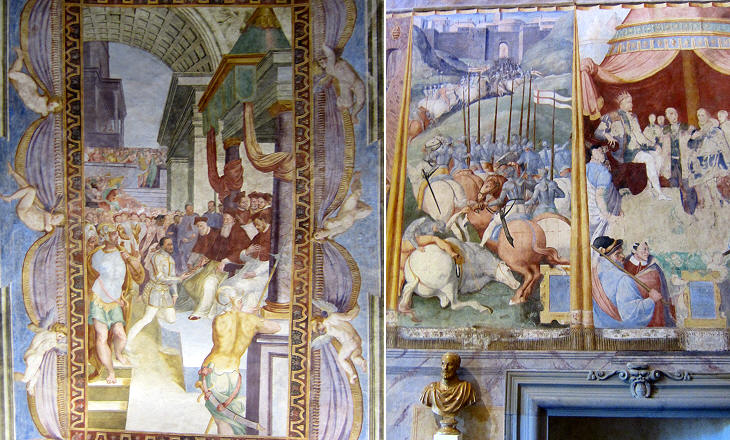 Frescoes in the main hall of Palazzo della Corgna showing episodes of the life of Ascanio della Corgna: (left) Appointment as Duke of Castiglione by Pope Julius III; (right) a military campaign and a diplomatic mission at the court of King Francis I of France

Most of the rooms of the palace were decorated with frescoes depicting mythological personages, but in some rooms subjects were related to Ascanio della Corgna. Because of his name a room was decorated with episodes from the lives of Aeneas and his son Ascanius and another room was dedicated to Julius Caesar whom Ascanio admired as a great commander. The decoration of the main hall was commissioned by Diomede Della Penna, nephew of Ascanio, who wanted to celebrate the life of his uncle. This is similar to what Cardinal Alessandro Farnese did at his palace at Caprarola. The frescoes however do not show Ascanio in the prison of Castel Sant'Angelo in 1565 when he was charged with multiple rape, murder, embezzlement, fraud and extortion. 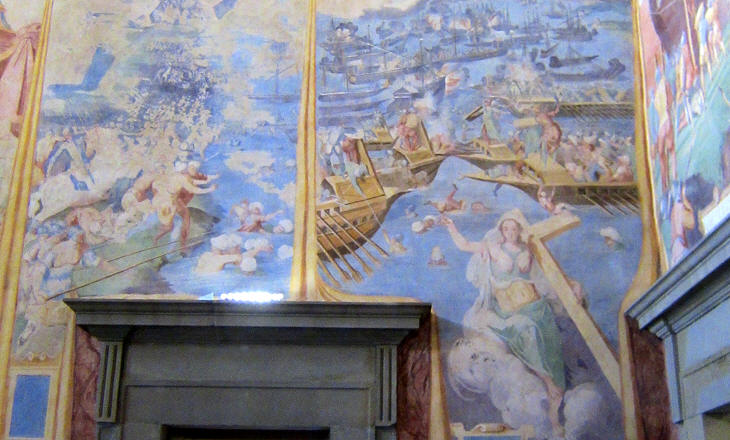 Frescoes in Palazzo della Corgna showing episodes of the life of Ascanio della Corgna: (left) the Great Siege of Malta; (right) the Battle of Lepanto

Eventually Ascanio was freed because the King of Spain wanted him to help Jean de Valette, Grand Master of the Knights of Malta who was besieged by an Ottoman army at Borgo. After the Ottomans were repelled Ascanio was asked for advice on the fortifications of Valletta.
The last episode depicted in the hall is the Battle of Lepanto (October 1571); because of his experience Ascanio was one of the main advisers to Don Juan of Spain, the commander of the Christian fleet. After his return to Italy he fell sick and he died in Rome in December. The successors to Ascanio della Corgna built a covered passage which linked their palace to the castle, similar to that which links the Vatican to Castel Sant'Angelo. In 1643 Castiglione returned under direct papal authority and became part of the province of Perugia.
Palazzo della Corgna has been acquired by the Municipality of Castiglione and it is open to the public together with the fortress. 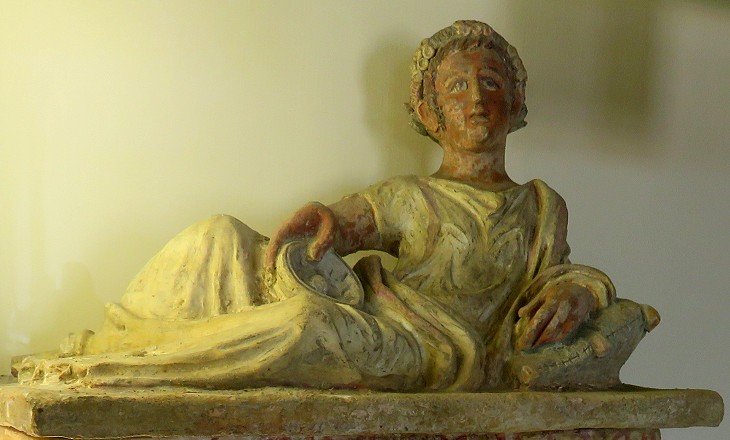 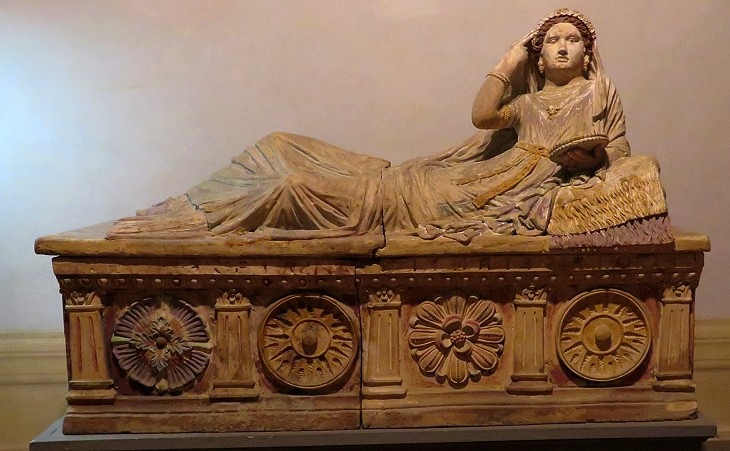 Sarcophagus of Larthia Seianti (IInd century BC) found in the Tuscan side of Val di Chiana, now at the Archaeological Museum of Florence 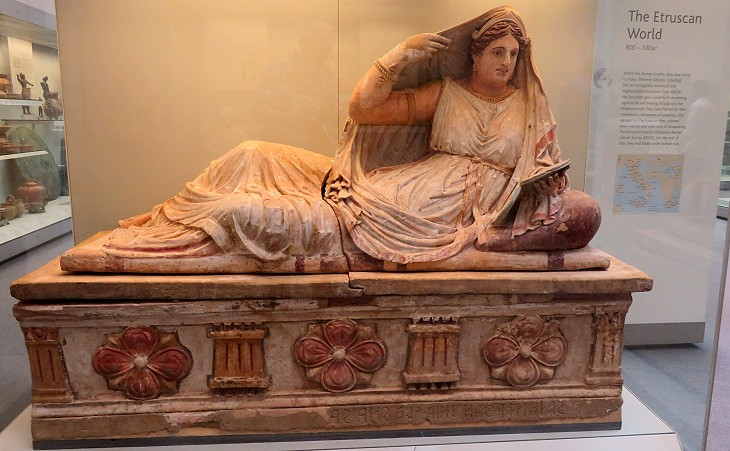 Sarcophagus of Hanunia Seianti (IInd century BC) which also was found in the Tuscan side of Val di Chiana, now at the British Museum