After leaving the Orte Junction the train departs from the main line to Florence and from the Tiber valley: it goes eastwards through a narrow gorge formed by the River Nera. 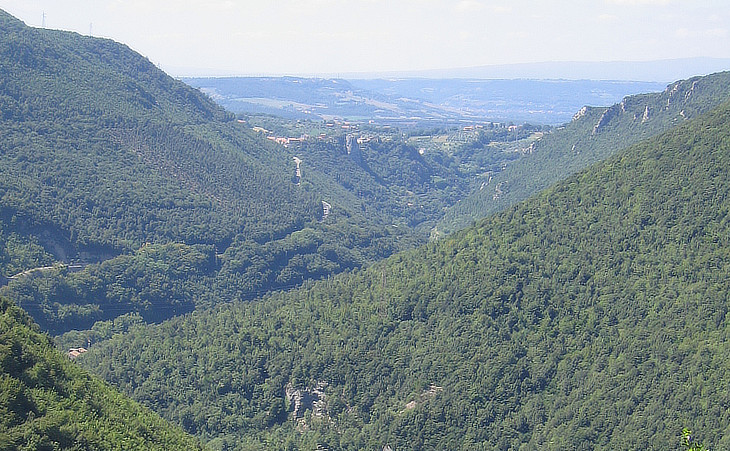 Few ravines are more full of beauty than the deep narrow gorge below Narni, broken here and there by masses of grey rock, elsewhere clothed with the richest green of ilex, cork, phillyrea, arbutus, mastick, and flowering heath.
Augustus J. C. Hare - Days near Rome - 1875
In 1866 the railway line was built on the Nera right bank after dams controlled its course; Via Flaminia, the historical road which linked Rome with Umbria and Marches followed a route through the woods on the hills south of Nera. We proceeded through this dell along the Nar, tumbling and murmuring over its rocky channel, and then, with some difficulty, worked our way through the olives and evergreens that line the steep, up to the town. We were particularly struck with its romantic appearance. Its walls and towers spread along the uneven summit, sometimes concealed in groves of cypress, ilex, and laurel, and sometimes emerging from the shade, and rising above their waving tops; delightful views of the vales, towns, rivers, and mountains, opening here and there unexpectedly on the eye; a certain loneliness and silence, even in the streets.
John Chetwode Eustace - A Classical Tour through Italy in 1802
Where Via Flaminia eventually reached the end of the Nera gorge the Romans founded Narnia, on the site of a previous town they had conquered in 299 BC. The location of the Roman town is visible in the right part of the photo shown above while the left part of the image shows the medieval expansion of the town on a nearby hill. 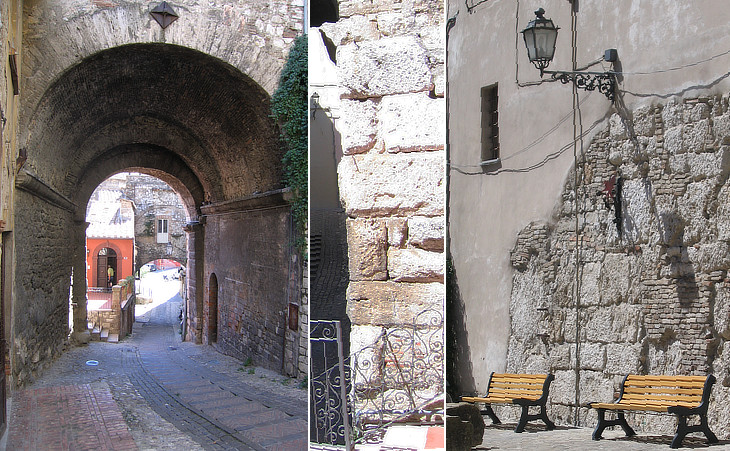 Originally the bridge had three arches, of which one on the right bank is entire, and sixty feet in height. (..) The bridge is now a grand ruin, ivy and shrubs garlanding its mighty parapets. Between the piers is a most picturesque view of the ruined convent of S. Casciano, crowning a rock amid the woods. Hare
Via Flaminia crossed the river on a very high and imposing bridge built as part of a major improvement of the road ordered by Emperor Augustus. These improvements were celebrated by arches erected at Fanum (Fano) and Ariminum (Rimini). The Romans modified the original landscape in order to obtain a sort of long and narrow terrace at the top of the hill. Parts of the arches and walls of Narnia can still be seen at several points of today's Narni. 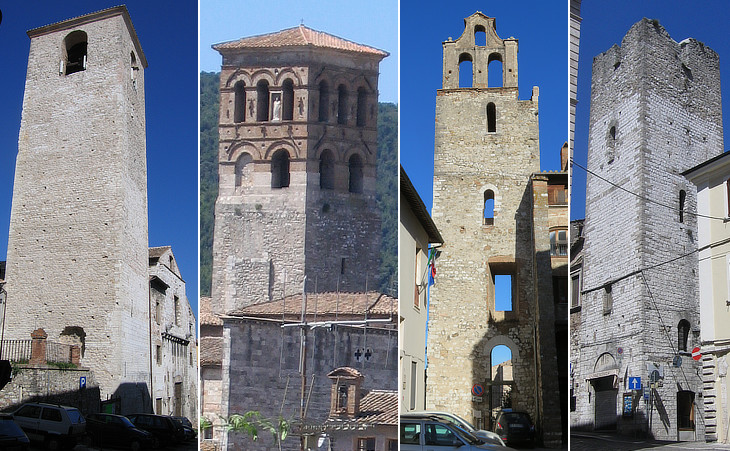 (left to right): bell towers of S. Domenico, the Cathedral, S. Bernardo; tower in Via Garibaldi

Narni suffered from the fall of the Roman Empire, but after the year 1000, due to its position on a main trading route, it profited from the recovery of the Italian economy. The town was situated at the perfect strategic position which made it easy to defend, but its inhabitants had to deal with internal strife and the main families lived inside house-towers: some of them were turned later into bell towers and they were spared by the XIVth century decrees of the papal government which placed limits on the height of private buildings. 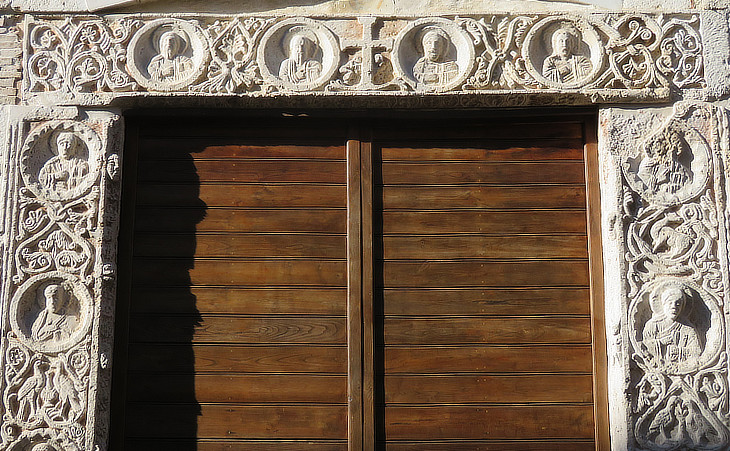 The economic development of Narni led to the construction of several churches: their portals were decorated with a mixture of classic motifs, portraits of saints and human beings in pretty strange postures who can hardly be linked to known religious or mythological episodes. The image used as background for this page shows a relief in S. Francesco. 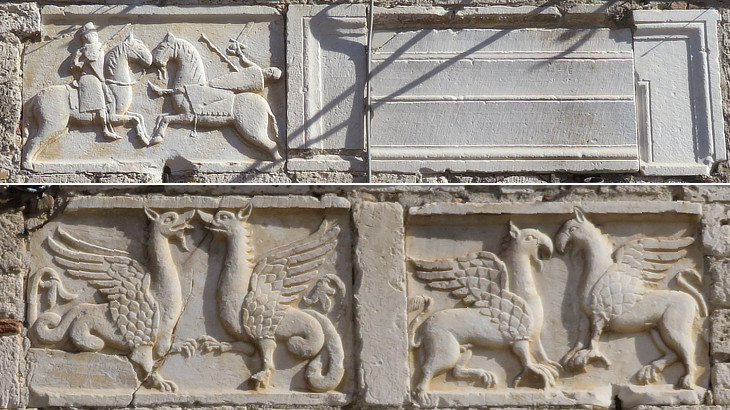 The symbol of Narni is a griffin and similar mythical creatures are portrayed in reliefs walled on several buildings. A more elaborate relief portrays a fight between two knights in a tournament.

Narni has two very peculiar medieval fountains; peculiar because of their shape and for the use of bronze at a time (the inscription on the fountain makes reference to the year 1303) during which metallurgy was still very primitive. 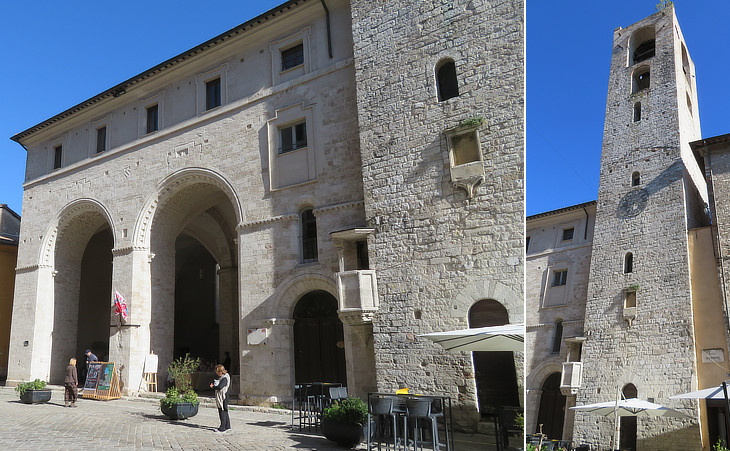 (left to right) details of Palazzo dei Priori; street near the cathedral

The wealth enjoyed by Narni in the early XIVth century led to building a town hall and a palace which had a large loggia where the merchants met in case of bad weather: the growth of the population led to building arches over the town narrow streets to create additional rooms. 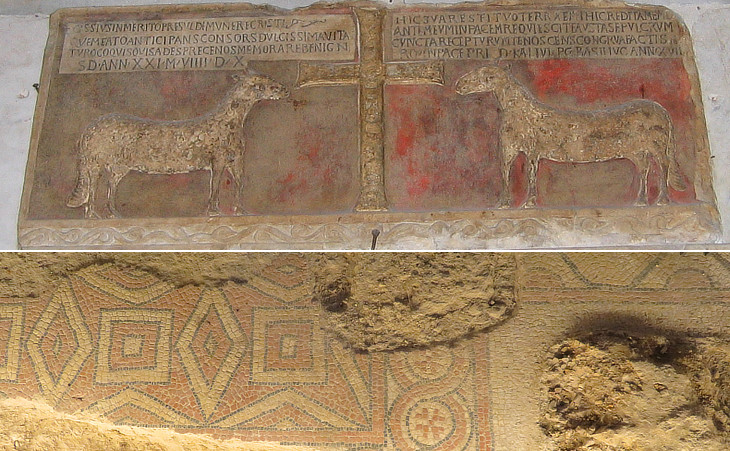 The cathedral of Narni is a complex building: its many works of art are a sort of summary of the history of the town.
It contains a very rare example of VIth century art: the tomb slab dedicated to Cassio, one of the first bishops of Narni, and to his wife Fausta. In the XIIIth century the cathedral was decorated with a Cosmati pavement which at a later stage was removed and used to decorate the walls of a chapel.