Similar to Oea and Leptis Magna, Sabratha was founded by the Phoenicians to support their trade routes along the coast of northern Africa. After the fall of Carthage in 146 BC at the end of the Third Punic War, the region of Sabratha was included in the Kingdom of Numidia until 105 BC when the Romans absorbed it into the province of Africa. 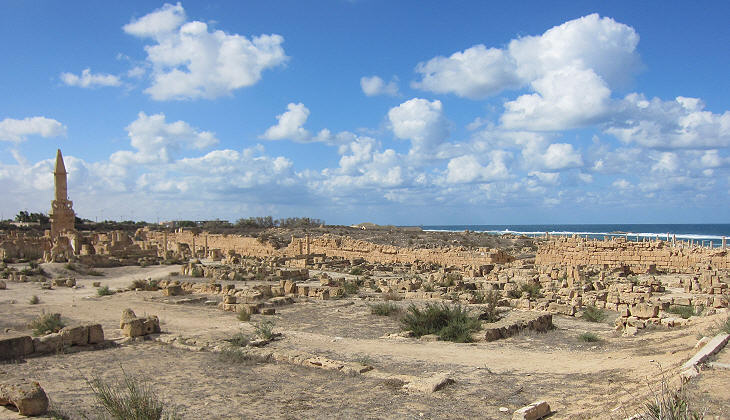 The heart of Roman Sabratha was the Forum which was located by the sea; today it appears surrounded by VIth century AD low walls which were built by the Byzantines when they defeated the Vandals, a Germanic tribe which had established a kingdom in northern Africa; the Byzantine town was much smaller than the Roman one. 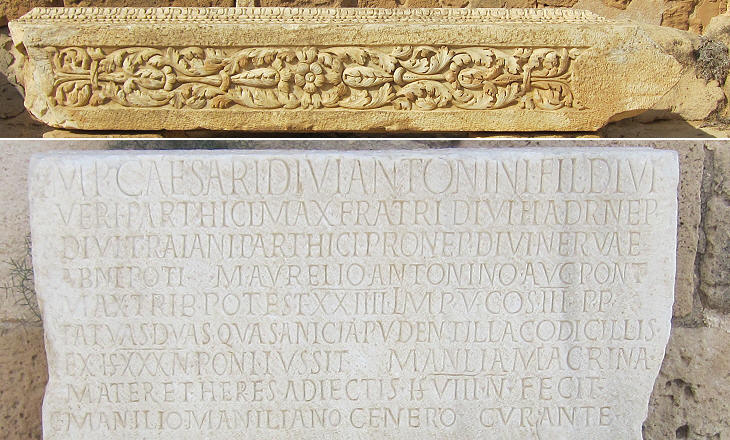 (above) A decorated pillar; (below) inscription celebrating the erection of statues of Emperors Marcus Aurelius and Lucius Verus near the Capitolium: "To Emperor Caesar, son of deified Antoninus, brother of deified Verus, the greatest victor in Parthia, grandson of deified Hadrian, great-grandson of deified Trajan the victor in Parthia, great-great-grandson of deified Nerva, Marcus Aurelius Antoninus Augustus, chief priest, tribune for the 24th time, acclaimed victor five times, consul three times, father of the country; the two statues whose erection Anicia Pudentilla ordered in her will at the expenditure of 30,000 sesterces, Manlia Macrina, her mother and heiress, had made at the additional cost of eight thousand sesterces, with Caius Manilius Manilianus, her son-in-law, in charge (of the work)" - The Inscriptions of Roman Tripolitania by J. M. Reynolds and J. B. Ward-Perkins

Sabratha enjoyed a period of growth after Emperor Nerva extended the road along the eastern coast of Tunisia to this town; the IInd century was a golden age for the whole Roman Empire and many of the monuments which embellish the Forum of Sabratha were built then. The inscription shown above lists the great emperors of that century from Nerva to Marcus Aurelius. 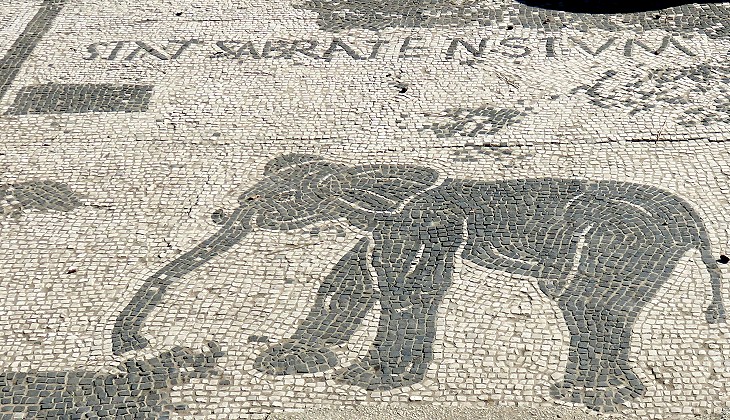 Mosaic portraying an elephant at Ostia; it was the logo of "Stat(io) Sabratensium", the maritime agency of Sabratha

One of the possible etymologies of the town's name is "cereals market" and no doubt Sabratha shipped grains (and olive oil) to Rome, but it also exported live elephants for the venationes (see a mosaic in Sicily), the slaying of wild animals which occurred before the gladiatorial duels; northern Africa was home to a subspecies of the African bush elephant which the Carthaginians trained for warfare. (left) Obelisk-shaped monument indicating the site of a tomb with reliefs portraying Hercules and Bes; (right) southern temple in the Forum

As all port towns Sabratha was cosmopolitan and its inhabitants had an open mind towards different beliefs and cultures; a much reconstructed monument which preceded the Roman conquest was decorated with reliefs portraying Hercules, the most popular Greek demigod, and Bes, an Egyptian god which the Phoenicians adopted and regarded as protector of navigation.
Excavations of the Forum led to the identification of a basilica (a large hall housing tribunals), a curia (a meeting hall) and several temples, for one of which the dedication has not been ascertained yet. 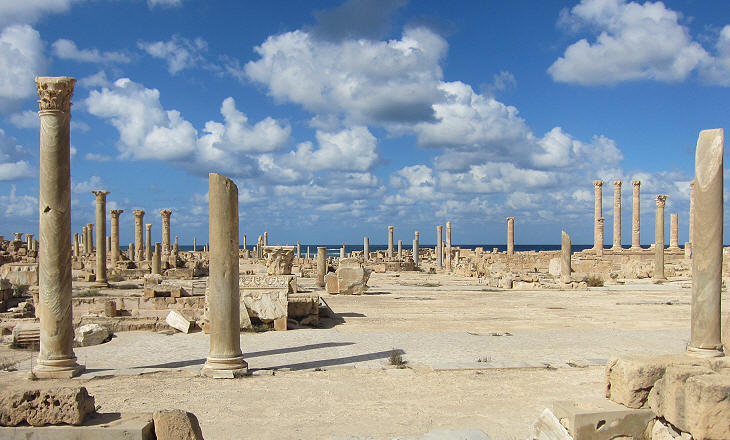 Overview of the Forum from the southern temple

In 1982 Sabratha was included in the Unesco World Heritage List because of "its grandiose monuments of which the most renowned one is the theatre"; it is difficult to assess the population of Roman Sabratha, but its theatre could seat 5,000, so it was a major town. 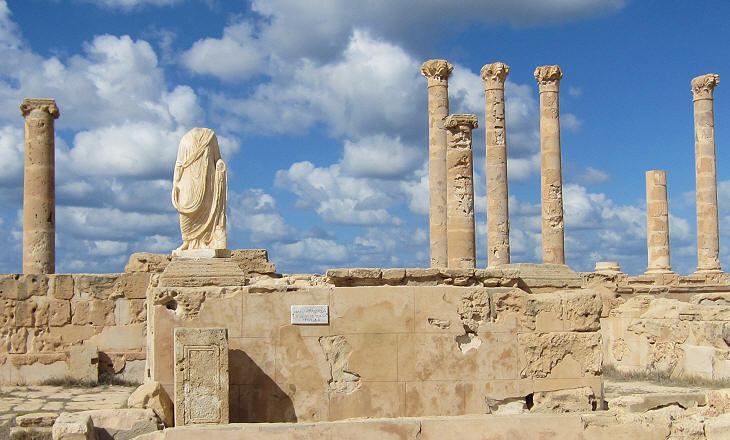 Fountain donated by Flavius Tullus, a wealthy citizen, near the Temple to the Antonines

The presence of a large fountain and of baths in the Forum indicates that the Romans provided Sabratha with an adequate supply of water; because the town was almost at sea level, aqueducts did not need to be high above the ground and excavations have identified earthenware pipes. 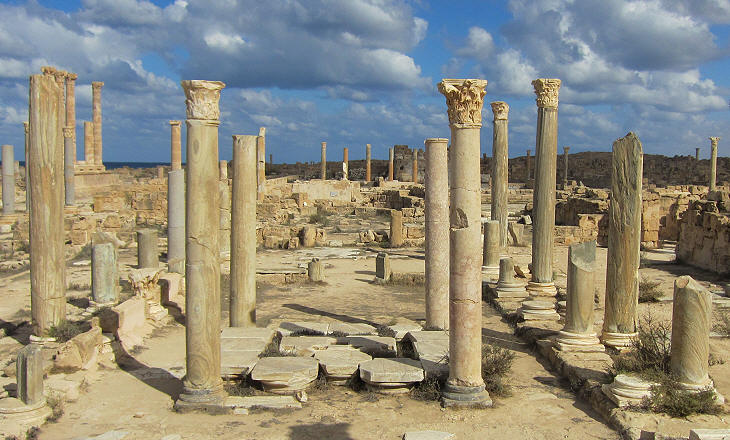 If I have rebutted all their charges, word by word, if I have refuted all their slanders, if I am beyond reproach, not only as regards their accusations but also as regards their vulgar abuse, if I have done nothing to impair the honour of philosophy, which is dearer to me than my own safety, but on the contrary have smitten my adversary hip and thigh and vanquished him at all points, if all my contentions are true, I can await your estimate of my character with the same confidence with which I await the exercise of your power; for I regard it as less serious and less terrible to be condemned by the proconsul than to incur the disapproval of so good and so perfect a man.
Apuleius - Apology - Translation by H. E. Butler
By these words in 158 AD, Lucius Apuleius, a Latin prose writer (The Metamorphoses or the Golden Asse), ended his defence in the basilica of Sabratha; he was charged with having forced a rich widow into marrying him with magic. He probably had a house in Ostia. 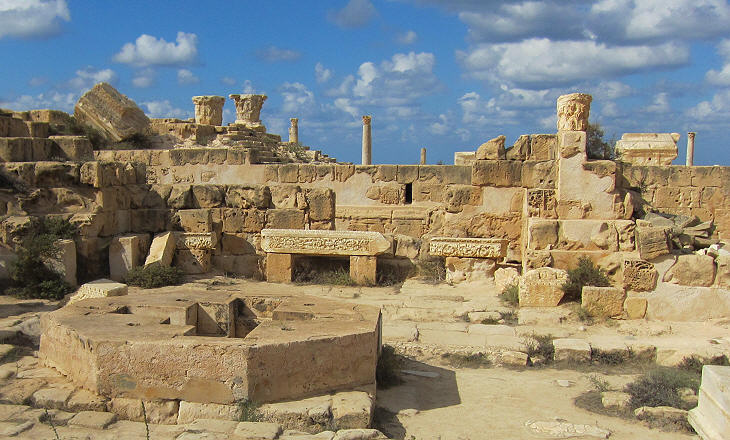 Baptistery behind the basilica

In the Vth century the basilica was modified and turned into a large church; its apsidal part houses a full-immersion baptismal font; it has the shape of a cross and three steps representing the Trinity leading down into the font, similar to one found on the Isle of Djerba, not far from Sabratha. 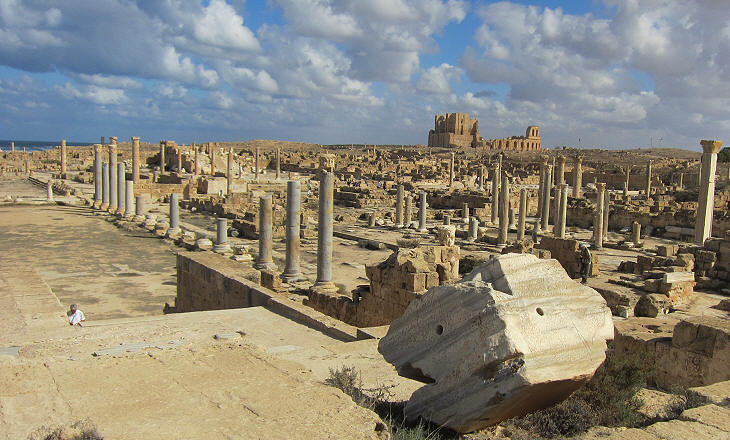 View from the Capitolium with the theatre in the background

In Rome Capitolium was the name of the hill where the major temples were located; in other towns of the Roman Empire it designated a temple dedicated to the Capitoline Trinity (Jupiter, Juno and Minerva); the Capitolium of Sabratha was built on a very high podium similar to that of Ostia, probably owing to the strong business ties between the two ports. 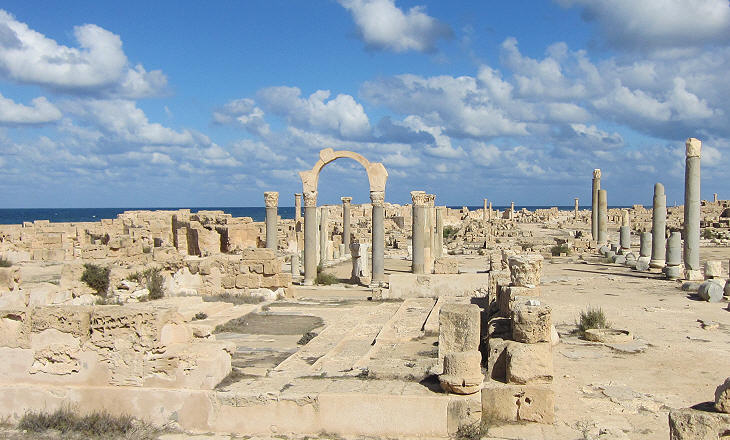 In 365 AD an earthquake damaged the Curia which was rebuilt probably on a smaller scale, but utilizing the materials of the old building; the use of stones of different colours (white marble, grey and pink granite, green "cipollino") which came from far away is an indication of the prosperity of Sabratha (see a page on the Stones of Rome). Temple to Liber Pater (far left), columns of Basilica of Apuleius (centre) and Temple to the Antonines (right)

Both in Sabratha and Leptis Magna major temples were dedicated to Liber Pater; the Latin name (Father of Freedom) is a reference to a Roman god similar to Bacchus and corresponding to the Greek god Dionysus. Liber Pater was probably the Latinized version of Shadrapa, the Phoenician god of Medicine. 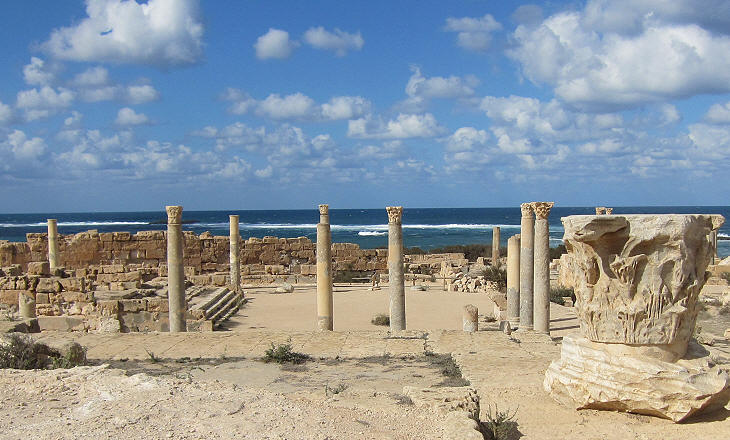 Syncretism means the amalgamation of different religions and cultures and its presence is evident in Sabratha; the varied dedications of its temples testify of a concordia religionum which today's world is far from having achieved. Serapis was a god with features deriving from Egyptian Osiris and Greek Zeus; he became very popular throughout the whole Roman Empire; on some coins it appeared to the side of the reigning emperor.

Move to page two to see the theatre and the baths of Sabratha or move to:
Introductory page
Oea (Tripoli)
Leptis Magna