In 1708 Pope Clement XI had to face a particularly severe financial situation and he required a one time payment from the members of the various guilds existing in Rome. The documentation of that taxation provides an interesting overview of the number of guilds, of their members and of their wealth. The Romans had to join a guild in order to run a business or to practise a profession. Some guilds had a large membership (the blacksmiths guild - Universitas Fabrorum - had more than 500 members), while the guild of the makers of playing cards had only 4 members. The guilds were divided into two categories: the first one included the so called liberal arts: doctors, lawyers, public notaries, architects, painters, bankers; the second one included all the other activities, from innkeepers to lute-makers. The papal government established for each guild the amount to be paid. It was then the responsibility of the guild to distribute the burden among its members. 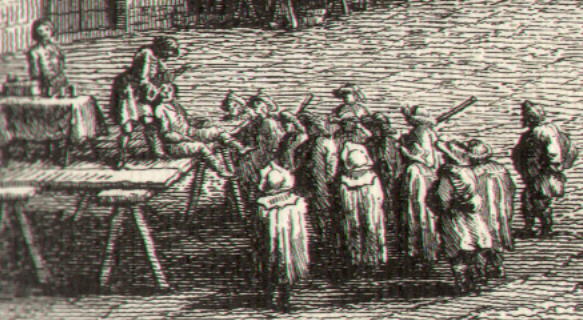 In the ancient times barbers did not limit themselves to shaving beards and cutting hair, but took care of external surgery. In XVIIIth century Rome they had lost this dual role and there were separate guilds for barbers and for surgeons. Dental surgery was often practised in the market squares of Rome and the screams of the unlucky sufferers attracted a small crowd. 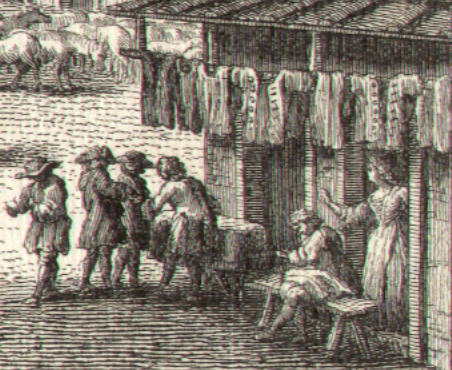 Jacket sellers in Via dei Giubbonari near Campo de' Fiori

XVIIIth century jackets were very elaborate and expensive. They had a thick row of buttons which by far exceeded practical needs. The jacket-manufacturers had their shops near a very busy square, Campo dei Fiori, and the street leading there is still named after them (Via de' Giubbonari) and it still has many shops selling clothes at a fair price. 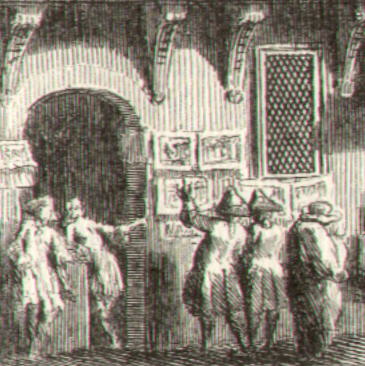 Print sellers in Via del Corso near S. Marcello

While the artists belonged to a guild known as Accademia di S. Luca, copper engravers did not enjoy the same status and belonged to a separate guild included in the list of manual jobs. Giuseppe Vasi belonged to Accademia di S. Luca, but to earn his living he concentrated on engraving rather than painting. The existence of a separate guild shows the relevance of the business which is confirmed by the shop selling prints shown by Vasi in the richest part of Via del Corso. Giuseppe Vasi however sold his prints in his apartment in Palazzo Farnese and the fact that he was living in the palace impressed his customers. His son Mariano found it more practical to open a shop in Via del Babuino.

A luxury carriage was the final product at which several guilds worked. The structure was prepared by joiners and wheel makers, while the seats in the interior were the work of saddlers. The decoration was entrusted to gilders and gouache painters (a way of painting in opaque colours ground in water and thickened with gum and honey). 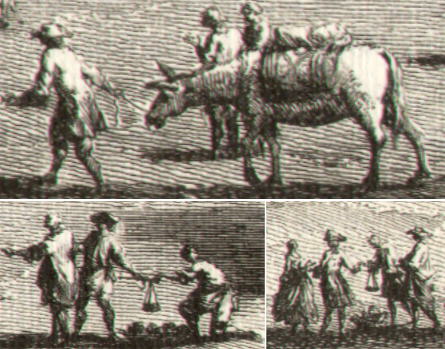 Hawkers in the streets of Rome

Vasi shows several examples of petty trade in the streets of Rome. In a way Rome still retains a very fragmented distribution chain. There are no large department stores and not many shops belong to a commercial chain. From time to time an old shop is forced out of business by an increase of its rent, a loss which is mourned by the whole community. There is a burden for the customer because this distribution system does not squeeze the costs, but there is an advantage for the citizen who enjoys a wider variety of shops. See a page on some historical shops of Rome.