Ponte Salaro
(Vasi at work in the Grand View of Rome)

The page covers:
The plate by Giuseppe Vasi
Today's view
Ponte Salaro
An April Walk to Via Flaminia (Torre Lazzaroni) 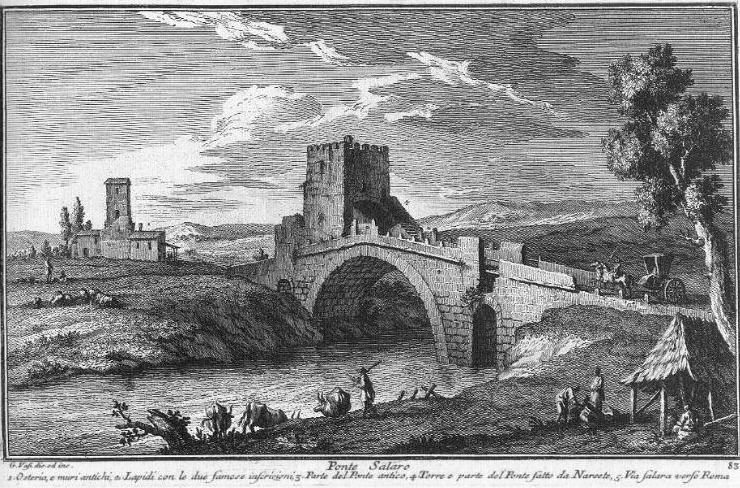 Ponte Salaro was named after Via Salaria, the road through which the inland regions north of Rome (such as Sabina) received the salt they needed for food preservation and cheese production. Ponte Salaro crossed the Aniene near the point where this river flows into the Tiber; many foreign painters of the XVIIth and XVIIIth centuries depicted it in their Italianate landscapes, small oil paintings which they sold in their countries of origin; similar to them Giuseppe Vasi gave more relevance to the landscape than to the bridge in this 1754 etching; for a very different approach you may wish to see a view by Giovanni Battista Piranesi (it opens in another window) drawn at approximately the same time.
In the description below the plate Vasi made reference to: 1) Tavern; 2) Roman inscriptions; 3) Part of the Roman bridge; 4) Tower built by Narses; 5) Via Salaria towards Rome. The small 1883 map shows: 1) Ponte Salaro; 2) Fontana dell'Acqua Acetosa (which is covered in another page); 3) Via Flaminia. 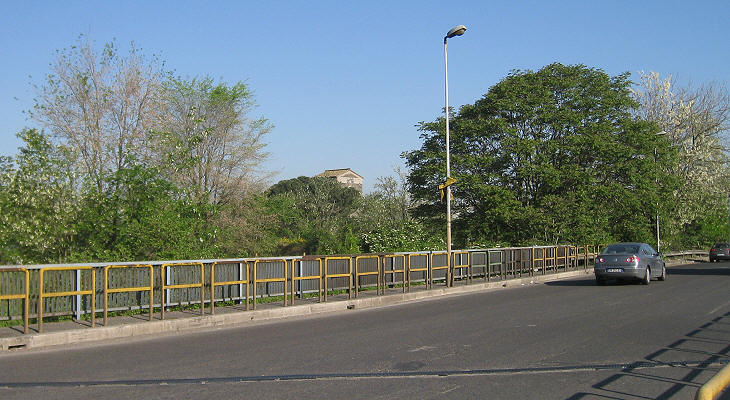 Ponte Salaro was damaged and rebuilt several times since Vasi's etching; today's view would hardly be considered by a painter for inclusion in a landscape; only the tower above the tavern is still there and its tip is visible from the current bridge. 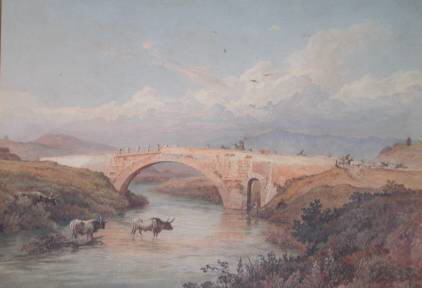 Ponte Salaro in 1840 by Friedrich Horner (by courtesy of Mr. Johannes Fichter)

The ancient Roman bridge was damaged during the Greek-Gothic War and it was repaired by Narses, a Byzantine general, who celebrated the event and his victorious campaigns by placing two long inscriptions at its centre. In 1799 the Neapolitans cut the bridge and the inscriptions fell into the Aniene. The tower on the bridge was most likely built in the VIIIth century and it was almost entirely rebuilt by Pope Nicholas V, who did the same at Ponte Nomentano; in 1840, as shown in the painting by Friedrich Horner, it did not exist any longer. In 1867 Garibaldi made an attempt to conquer Rome from the north with the help of an internal revolt. The French troops who defended the city blew up the bridge in order to check his advance and eventually defeated him near Mentana. 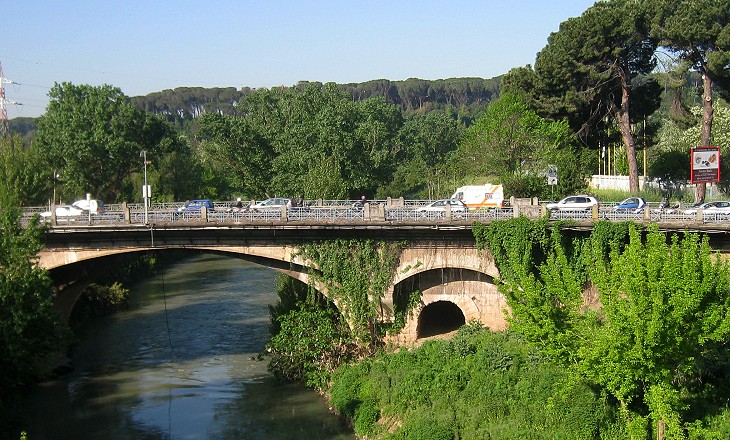 Modern bridge built on the foundations of ancient Ponte Salaro

The current bridge was built in 1870 and enlarged in 1930; a second bridge parallel to it was built after WWII to cope with the high volume of traffic caused by the urban development of Rome beyond the Aniene. 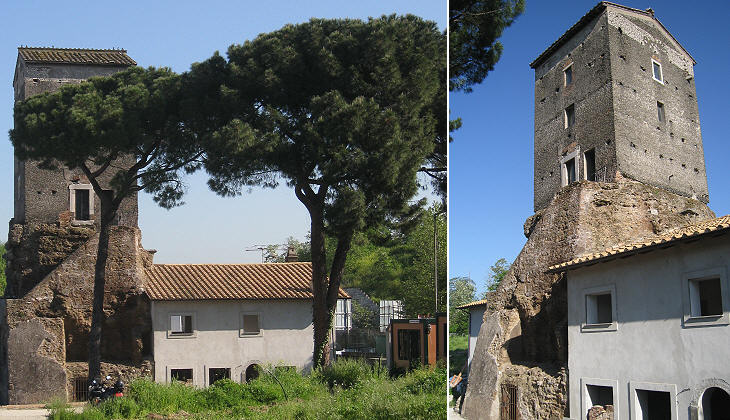 The ancient Roman tomb at the base of the tower was popularly known as Sepolcro di Mario, a reference to Marius, the leader of a faction during the First Roman Civil War and whose body is said to have been exhumed and thrown into the Tiber four years after his death.

An April Walk to Via Flaminia

The initial part of this walk makes use of a very congested road which leads to a bridge across the Tiber; on the other side of the river, a cycling track offers the opportunity for visiting an area where many sport facilities are located. 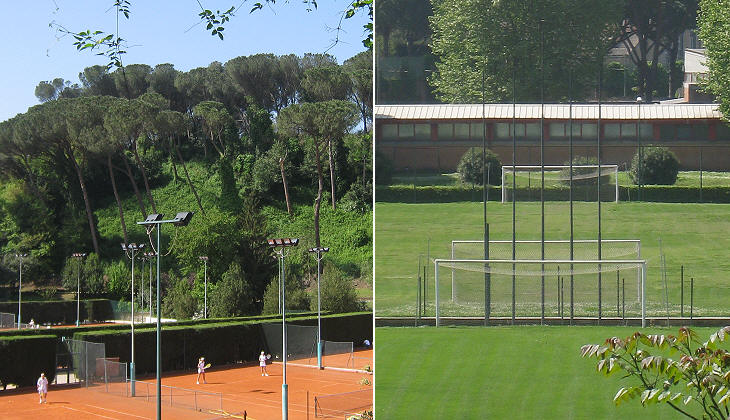 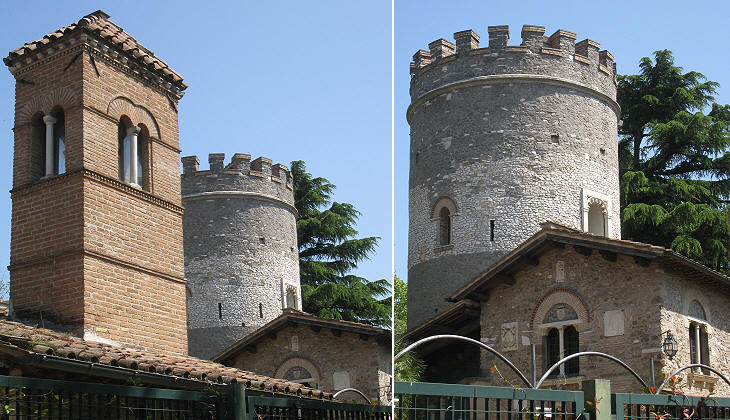 Views of Torre Lazzaroni. The tower is named after the family who bought it at the beginning of the XXth century; the Lazzaroni added to it medieval looking buildings, coats of arms and merlons. Similar to the tower of Ponte Salaro it was built above an ancient Roman tomb 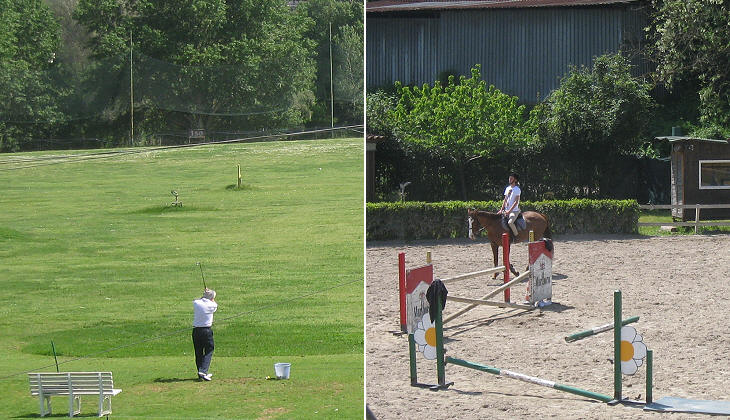 Training grounds for golf and show jumping. Another golf player can be seen in the image used as background for this page

Cycling track near Via Flaminia

Next plate in Book 5: Fonte dell'Acqua Acetosa.
Next step in your tour of the Environs of Rome: Ponte Nomentano.