- Ephesos Museum of Vienna
(inscription in the Library built by Consul Julius Aquila to celebrate
his father Julius Celsus Polemenus, proconsul of Asia)

You may wish to see the pages on ancient Ephesus first. 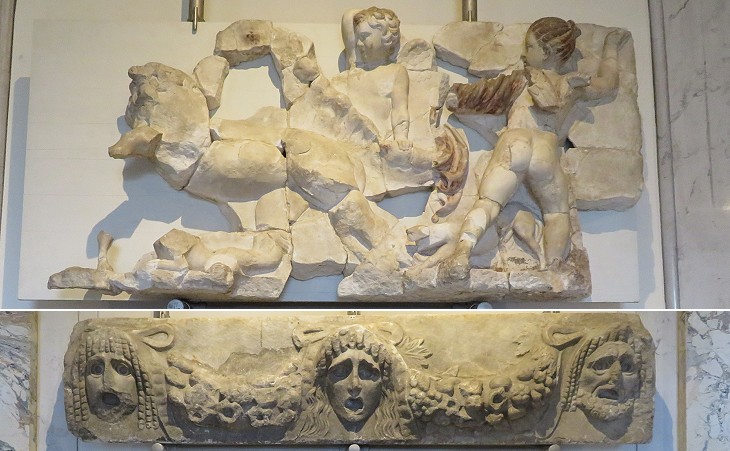 Decorative reliefs from the Roman Theatre of Ephesus

In the second half of the XIXth century the great European powers were competing for hegemony on a world wide scale, as they felt charged with the mission of bringing civilization to every inhabitant of the planet. The conflict was fought in the military, scientific, and economic fields, but also the cultural prestige of a country mattered. In this context archaeology played a special role because in a way or another all the European powers claimed to be the heirs of the Greek/Roman civilization. The Austro-Hungarian government promoted excavations in the territory of the Empire. In 1882 Emperor Franz Joseph inaugurated the Archaeological Museum of Aquileia to house the works of art which were found there. Excavations were conducted also at Salona in Dalmatia and later on at Carnuntum, a Roman frontier town on the Danube. 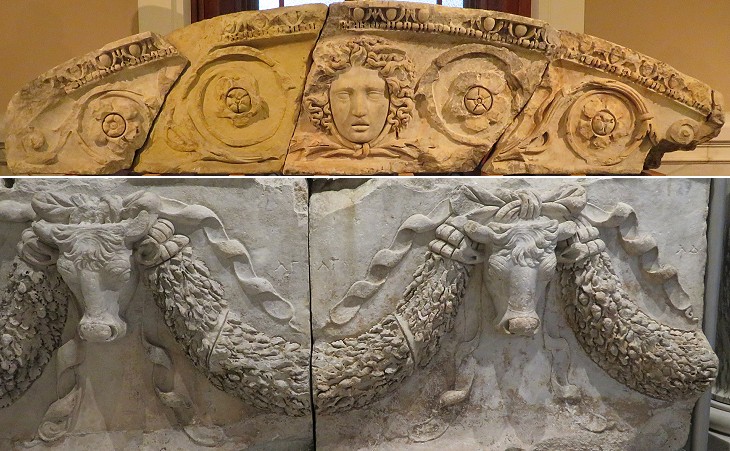 The findings of these archaeological campaigns were very interesting, but they could not compete with those which were on display at the Louvre in Paris or at the British Museum.
In 1894 Paul Gautsch, Minister of Education of Cisleithania, the Austrian half of the Empire, requested Otto Benndorf, Professor of Classical Archaeology at Vienna, to formulate suggestions for a large scale archaeological campaign abroad. The choice fell on Ephesus which had been properly excavated only in the area of the Artemision in 1870. A detailed project was developed with the assistance of Carl Humann, a German archaeologist who was well known for his excavations at Pergamum and for having managed to ship the Frieze of the Altar to Zeus to Berlin. Eventually the Austrian government bought a large piece of land in the area surrounding the visible monuments of the ancient town. 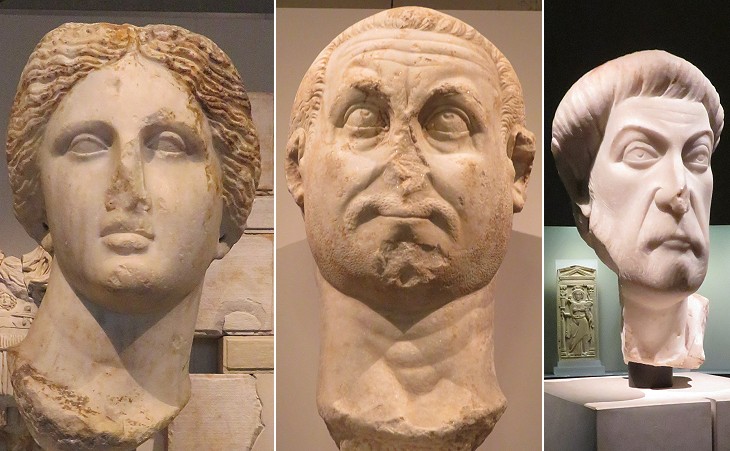 The first campaign in 1895 was extremely successful and the Austrian government funded its continuation. By 1913 the harbour gymnasium, the theatre, Via Arcadiana, the city's water supply system, the Commercial Agora, the Library of Celsus, Kouretes Street, the State Agora and the Church of the Virgin Mary were all excavated. In 1897 Benndorf obtained the permission by Sultan Abdul Hamit II to export any discoveries to Vienna. 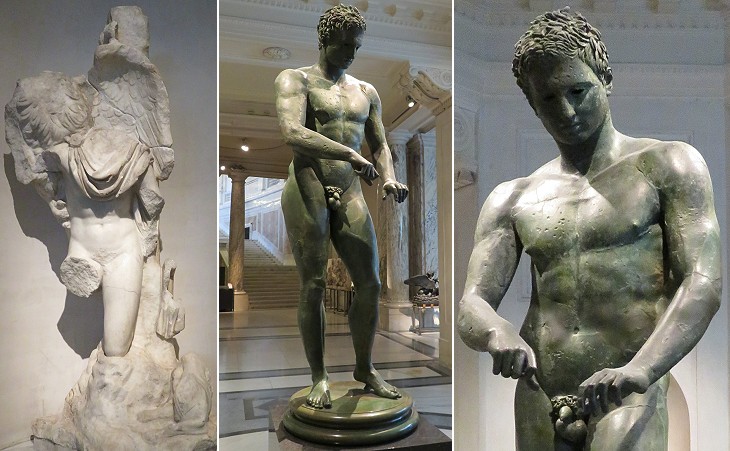 Statues from Ephesus: (left) Zeus and Ganymede (IInd century AD, it was reutilized in a Byzantine fountain opposite the Library of Celsus; (centre/right) "Athlete from Ephesus" (Ist century AD based on the Apoxyiomenos/Scraper with a missing strigil, a IVth century BC statue by Lysippos - see another copy in Rome) from the Palaestra of the Harbour Baths

Seven shipments to Vienna of works of art from Ephesus took place between 1897 and 1906. They were displayed in exhibitions in the Belvedere Palace or in a replica of the Theseion, an ancient temple of Athens. Eventually in 1978 a separate section of the Kunsthistorisches Museum was opened in the Hofburg, the former Imperial Palace. In addition to exhibits from Ephesus it houses findings from other Austrian archaeological campaigns abroad. In this website you can see the frieze from the Heroon of Trysa, an ancient Lycian town, and fragments of the decoration of the Heroon and of the Arsinoéion of Samothrace. The image used as background for this page shows a detail from an altar from Ephesus which shows victories leading animals to a sacrifice. 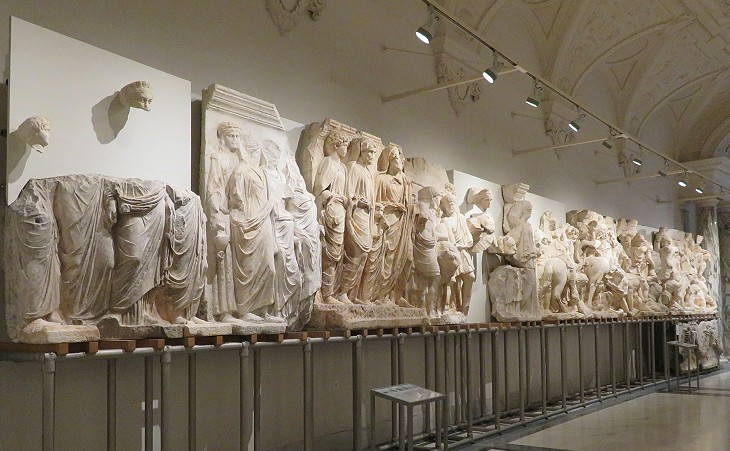 Reliefs (original and casts) of the Parthian Monument

The key reason for establishing a separate museum for Ephesus was to properly display some large reliefs which were found as reused material in the Byzantine fountain near the Library of Celsus, similar to the relief of Zeus and Ganymedes, and eventually also in other locations. The purpose of the reliefs was initially obscure, but because they mainly depicted scenes of battles, most likely against the Parthians, the monument they decorated was called Parthian Monument for ease of reference. The reliefs at the Museum are displayed in two long series opposite each other, but this is not meant to indicate they were so placed in the original monument. Other reliefs were discovered in the 1960s and 1990s and their casts were acquired and placed with the originals. 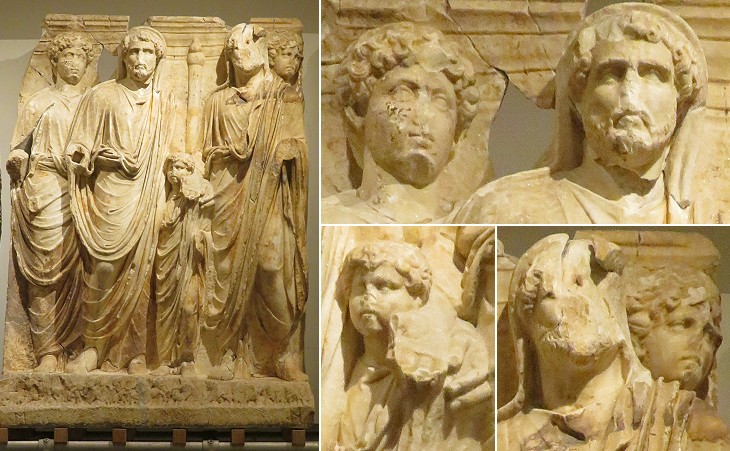 Parthian Monument: the Adoption Process in 138 AD: (left to right) Marcus Aurelius (aged 17), Antoninus Pius (aged 52), Lucius Verus (aged 7) and Hadrian (aged 62) and details of their faces including that of a genius or of Aelius Commodus Verus, the deceased father of Lucius Verus

Archaeologists looked for inscriptions which could shed light on the dating of the monument, but in 1903 they discovered a very illuminating and unusual relief which depicted the adoption process of the Roman Emperors in the IInd century AD. The purpose of the relief was to highlight how this process provided the Empire with an orderly succession which covered three generations. Hadrian was portrayed while passing the sceptre of command to Antoninus Pius at the presence of the next generation of emperors. They both are dressed as Pontifex Maximus (rather than as military commanders) and are attending a religious ceremony, similar to what can be seen at Ara Pacis Augustae (also the depiction of Lucius Verus calls to mind the Roman altar). Parthian Monument: the Romans defeat the Parthians (or an Asiatic enemy)

In the 160s Lucius Verus led a series of campaigns against the Parthians during which he spent much time in preparations at Ephesus. This has prompted the conclusion that the monument was a celebration of his campaigns, but today archaeologists suggest that its purpose went beyond that military event and was an overall celebration of the Roman Empire by one of its richest cities. The shape of the monument is still a matter of debate. It could have been a large altar similar to that of Pergamum with a frieze running at its base or a square building with a small altar in the courtyard which was decorated by the reliefs. 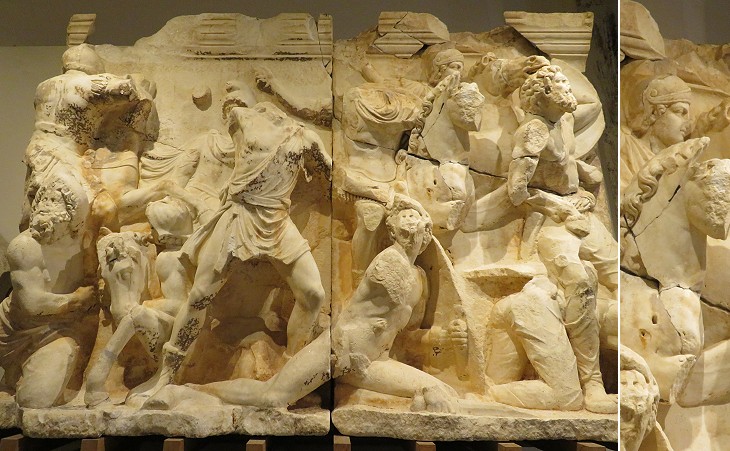 Parthian Monument: the Romans defeat the Germans (or another European enemy, but not the Dacians) with a detail showing the finesse of the sculptor

There are two large scenes of battle and the Roman enemies are not fully identifiable; in one scene they wear a cap which can be associated with the Parthians, in the other scene they fight almost naked, a characteristic which the Romans associated with the Germans/Gauls. If one considers the two reliefs together they convey the message that the Roman army was victorious both in the East and the West, a concept which will eventually be symbolized by the double-headed eagle of the Byzantine emperors. 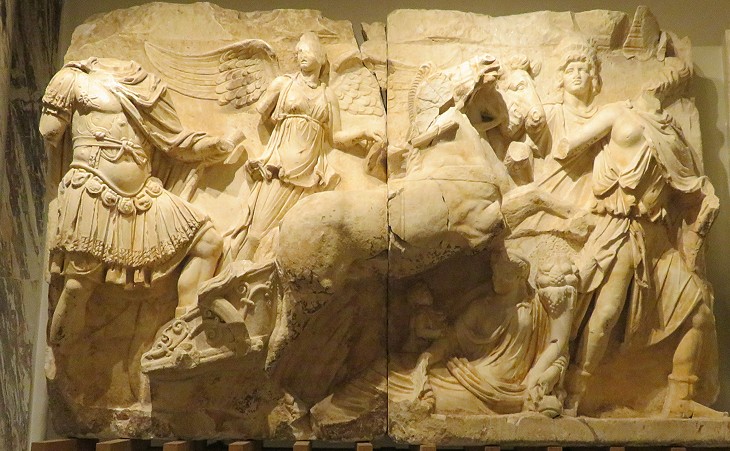 Triumph of the Emperor

A very fine relief showing the triumph of a military commander, most likely an emperor, could have clearly confirmed that the monument was meant to celebrate a specific campaign of Lucius Verus, but unfortunately the head was not found and it has not been possible to name the man who was portrayed. The scene is depicted in a very symbolic way with some figures whose presence cannot be easily interpreted, apart from the winged victory. The group emperor/chariot/horses has a definite upward movement that would suit an interpretation of the relief as an apotheosis (divinization), a process which occurred only after the death of an emperor. 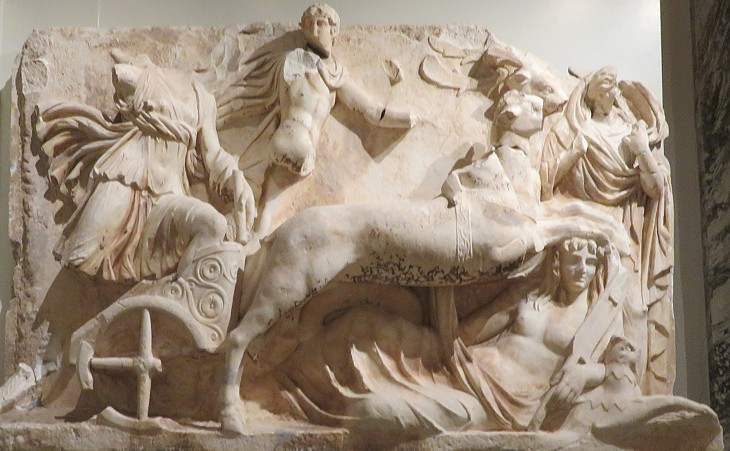 Triumph of Artemis/Diana on a chariot drawn by hinds

Two other reliefs depicted the triumphs of Artemis and Apollo in a very similar manner, so it is likely there was a second relief showing the triumph of a military commander or emperor.
Clarisse reflected. "In many depictions, Apollo is man and woman. On the other hand, the Apollo with the arrow was not the Apollo with the lyre, and the Diana of Ephesus wasn't the Diana of Athens. The Greek gods were double beings, and we've forgotten that, but we're double beings too."
Robert Musil - The Man Without Qualities - Translation by Burton Pike
The unfinished novel by Musil describes the Viennese society before WWI and the quotation shows the writer's interest in the monuments of Ephesus. 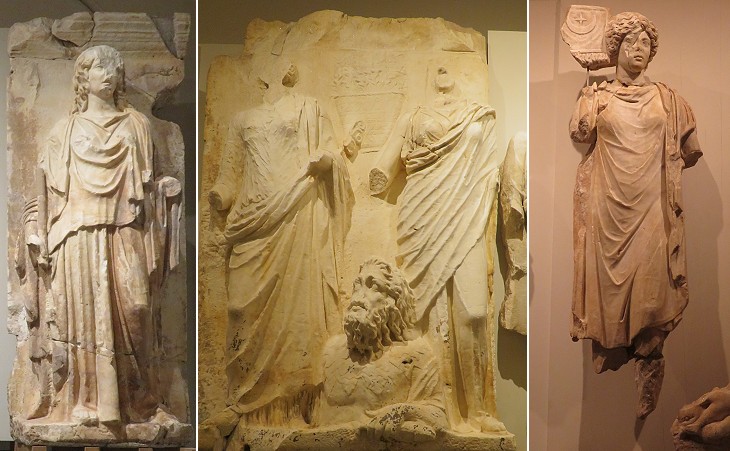 (left) Demeter; (centre) Alexandria and Egypt at the sides of the River Nile; (right) Antioch (?)

In addition to celebrating the adoption process and the Roman military might the monument showed: a) the divine protection on the Empire by portraying many gods and b) the community contribution to its greatness by depicting personifications of cities/provinces (the latter subject decorated also the Temple of Hadrian in Rome). In general the reliefs covering these two aspects are very fragmentary. 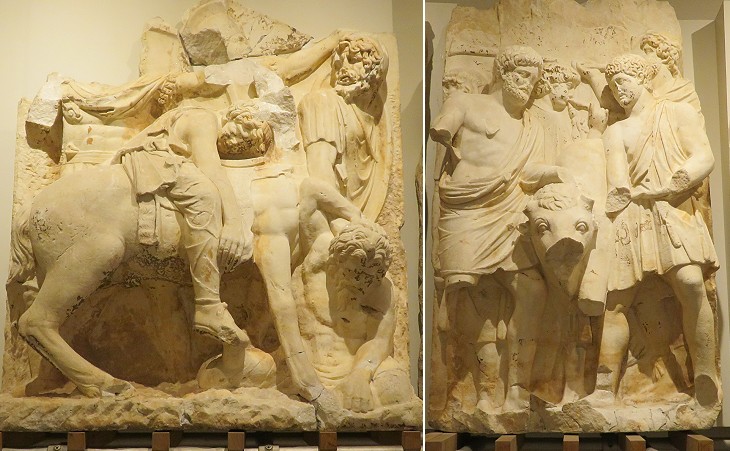 Other reliefs of the Parthian Monument: (left) defeated enemies; (right) scene of a sacrifice which is related to the celebration of the adoption process (see a similar relief in Italy)