Note: unfortunately the 2020 pandemic made some of the images of this page all too familiar.

Emperor Augustus, after having given his name to the sixth month (sextilis) of the Roman calendar, moved to August the festivities which took place in September to mark the end of the summer agricultural cycle. The feriae Augusti (hence It. Ferragosto) were marked by collective rites and by eating, drinking and sexual excesses. Slaves and servants were allowed to participate in these rites. These festivities which reached their peak on the 15th were so deep rooted that the Church preferred to give them a Christian significance, rather than to try to eradicate them. Since the VIth century AD there is clear evidence that the 15th of August had become the religious holiday celebrating the Assumption of the Virgin Mary. Today it is the peak of the holiday season for the Italians, who all believe they have to go out of town at Ferragosto (the image used as background for this page shows people at a seaside resort).
In 1669 Francesco Morosini, the Venetian governor of Candia, the main town on the island of Crete, acknowledged that after more than twenty years of siege Candia could no longer be defended. He therefore signed a peace settlement with the envoy of the Ottoman Sultan by which he surrendered the town in return for the right of its inhabitants to leave on board a vessel of the Venetian fleet if they so wished. When eventually the Ottomans entered the town it is said that they did not find more than 50 people.
Every year on the morning of Ferragosto between 7:30 and 9:00 the city of Rome looks as empty as Candia looked to the first Ottoman vanguards. 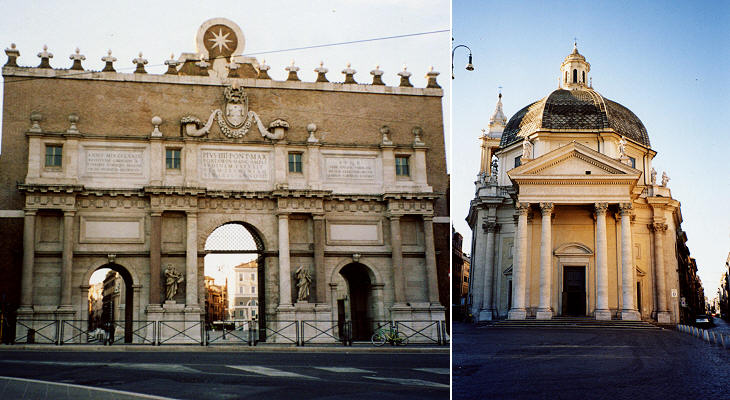 Porta del Popolo is open but no one goes through it. The vast oval of Piazza del Popolo is completely empty: S. Maria dei Miracoli is open, but the beggar is not at his place, nor the police van is parked next to the church portico as it usually is.
The few Romans who are at home prefer to oversleep while the tourists will not show up until 9:00.
It is a unique opportunity to walk through a very different Rome. 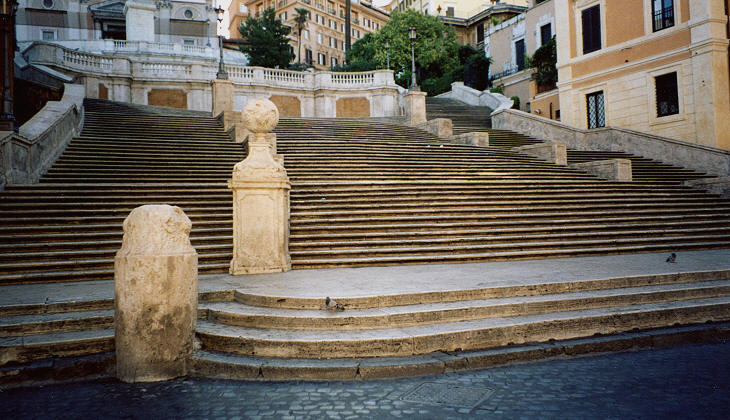 Since they were built in the XVIIIth century the Spanish Steps have always been crowded with people. They immediately became very popular with the foreigners who lived in Rome and through them with the foreigners who visited Rome. Today they are a meeting point for the young and until very late at night the steps are filled with people who are not yet willing to go to bed.
To see them with no one in sight is a bit like imagining what will be seen by the rats or the ants or whichever species will rule earth after mankind will have eventually succeeded in destroying itself. 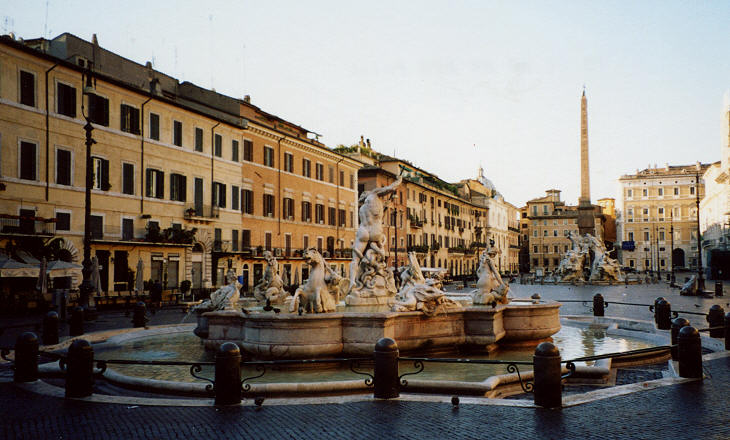 Baroque sculptures were meant to attract the attention of the passers-by. Without anyone admiring them their theatrical gestures seem senseless. In the past Piazza Navona was very crowded at Ferragosto. Pope Innocent XI established that on this day the pipes discharging the waters of the fountains should be blocked, so that the fountains overflowed and Piazza Navona became a sort of pool. Here the rich and the poor mixed together playing all sorts of jokes with the only objective of refreshing themselves. 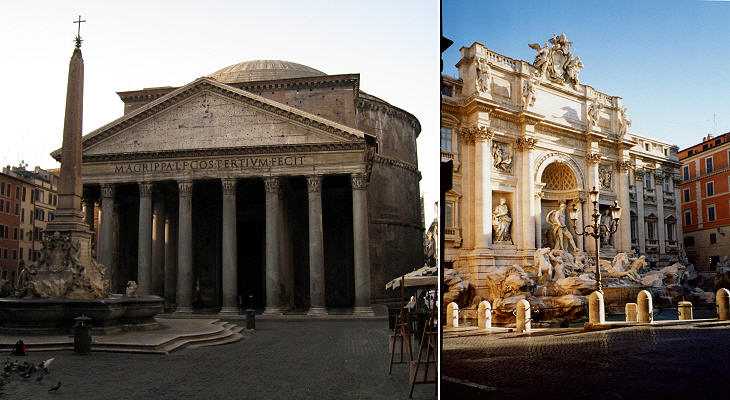 Some of the landmarks of Rome can be seen at a distance as both the papal and the Italian government opened large streets leading to them. Other monuments instead come as a surprise; a very popular song describes this sudden emotion.

The song was written in the 1950s and I doubt that even then Fontana di Trevi was tutta per te (all for you). But at Ferragosto for a couple of hours both the fountain and the Pantheon can be admired in perfect solitude.

Most of the writers of the XVIIIth and XIXth century have described their reactions at the view of this symbol of Ancient Rome. Some cried, some recited pages of Livy, some pondered on the destiny of mankind, all (at least in their accounts) let their readers believe they had been very impressed by these gigantic ruins.
Today, it is not so easy to concentrate on a thought, as Colosseo is visited by crowds which often surpass those who gathered there to see the gladiators. Ferragosto offers a chance for early birds to check if their reactions are similar to those of the travellers of the past. 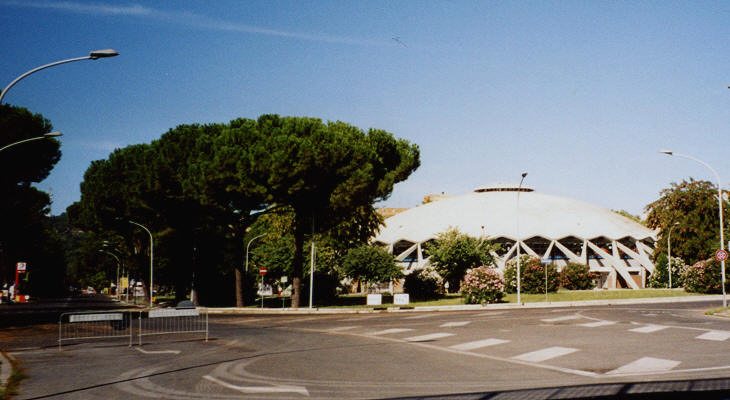 While after 9:00 central Rome gets gradually populated by tourists, in the other parts of the city it is difficult to meet a single person during the whole day. It is a unique opportunity to stand at the centre of a usually heavily trafficked road to take a picture from the most appropriate point.