In 106 AD in a remote town in the Carpathian Mountains, Decebalus, King of the Dacians killed himself; his example was followed by other Dacian chieftains; they were surrounded by Roman troops who had been chasing them for months after having conquered their capital Sarmizegetusa. It was the final event of the Second Dacian War. Emperor Trajan, who had personally led the campaign, was given an extraordinary triumphal procession in Rome. Dacia (today's Romania) was rich in gold and silver and in 107 the Emperor used these newly acquired resources to finance a major expansion of the Roman Forum. 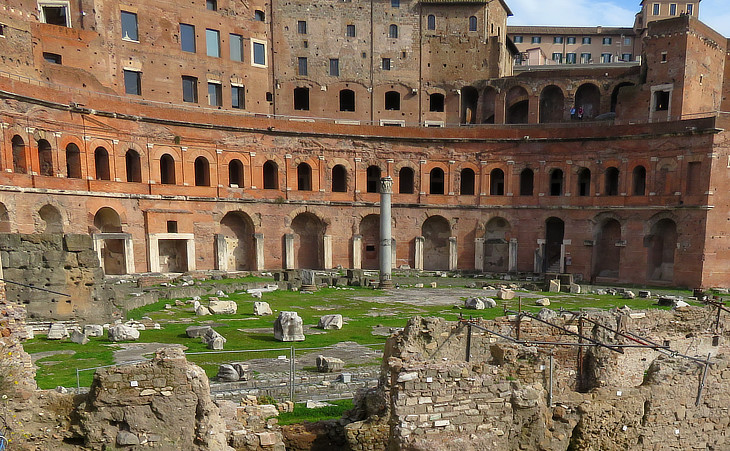 Forum is a Latin word meaning "public square surrounded by porticoes and buildings used for judicial and other businesses". In the lack of newspapers it was also the place where people went so they would know what was going on. The Roman Forum was located between the Capitoline and the Palatine hills. In 54 BC Julius Caesar started enlarging its western part (Foro di Cesare); in 2 BC Emperor Augustus expanded the Forum to the north (Foro di Augusto). At this point the Forum was surrounded by hills: the Capitoline to the west, the Palatine to the south, the Quirinal to the north: an expansion to the east was blocked by the Colosseo and other buildings. 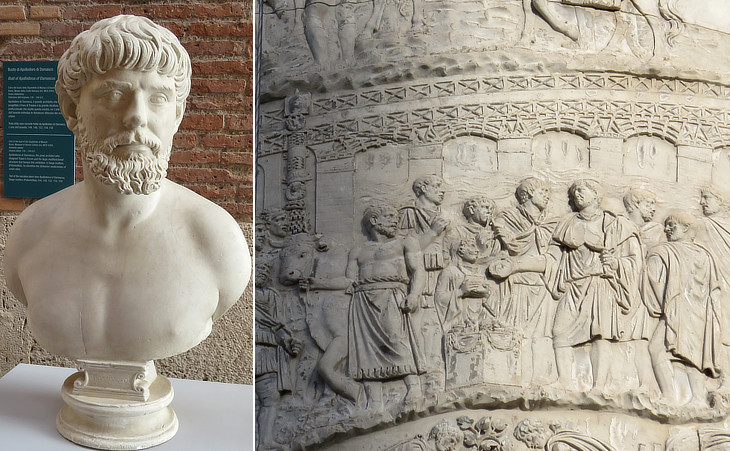 Trajan asked Apollodorus of Damascus to develop a project to make room for a further enlargement of the Forum. Apollodorus was a military engineer/architect who had built a bridge over the Danube for the Emperor during the Dacian campaigns: it had twenty stone piers which supported wooden arches and it was the longest bridge in the world. He was also an expert in siege machines.
Apollodorus decided to level to the ground the southern part of Quirinal: he then built on the flattened land the new forum dedicated to Trajan. The earth caused by the excavations was utilized to fill the halls of Domus Aurea and to build large public baths above it.

Apollodorus realized that the remaining part of the hill behind the new forum was both a poor background for the monuments he was erecting and a potential threat as it could slide down on them. He considered building a thick wall, similar to that which hid the view of the poor dwellings behind Foro di Augusto, but feared it could collapse. Eventually he built a low wall to mark the boundaries of Trajan's Forum, but devised a more radical solution to prevent landslides. The slope of the hill was terraced and became the site of a commercial district (Trajan's Markets).
The lower terraces were given a round shape because in this way they better withstood the pressure of the hill. So the so called Great Hemicycle is both a finely designed monument and the evidence of an advanced knowledge of construction techniques. After 1900 years it still serves the purpose for which it was built.

The Great Hemicycle was strengthened by two halls at its end: they too had the shape of a hemicycle and were covered by a low dome, which had the same structure as the one which was built for the Pantheon a few years later. Many experts credit that dome to Apollodorus, who is thought to have been involved also in the design of Portus Traiani, a new harbour at Porto, a new wharf and a triumphal arch at Ancona, and of a triumphal arch at Benevento. He might have superintended also a redesign of Via Appia at Terracina.

(left) Shops in Via Biberatica; (right) reconstructed panels which were used to close the shops, probably based on those found at Herculaneum

The upper terraces have an irregular shape: the shops aligned along the market's main street were most likely taverns; Via Biberatica, the medieval name of the street is most likely a reference to biber, a Latin slang term for beverage, which is also the origin of beer.
Most of the travertine stones which frame the shops are the result of a 1930s reconstruction. 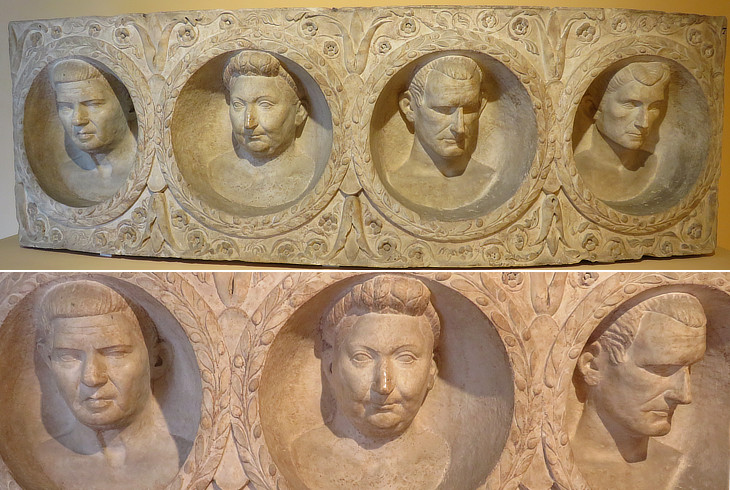 Centrale Montemartini: Ist century AD funerary relief discovered in Via Biberatica in 1929 (see a similar one which was discovered outside Porta del Popolo)

In the Ist century AD Via Biberatica was the initial section of Via Salaria Vetus and it was outside the pomerium, the legal border of the City of Rome within which tombs could not be erected. The fine funerary relief which was found there testifies to the realism of Roman portraiture. The hairstyles of the ladies provided a clue for dating the relief. 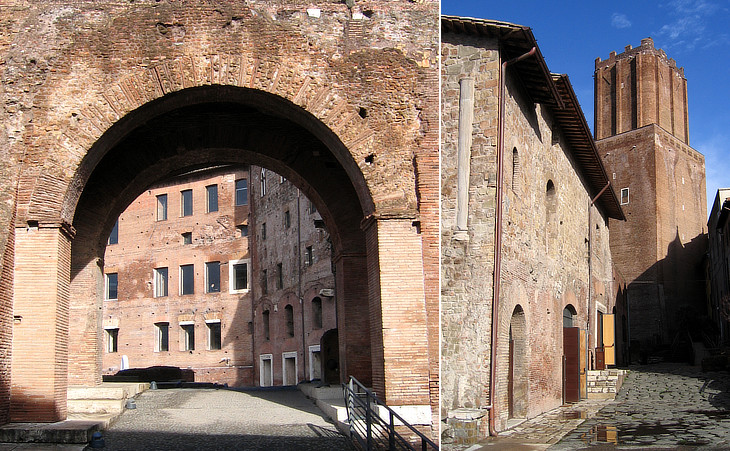 During the Middle Ages the solid buildings designed by Apollodorus were modified to serve other purposes such as monasteries and a series of fortifications which included a high tower. In his 1748 map Giambattista Nolli indicated that the remaining evidence of Roman constructions belonged to baths. 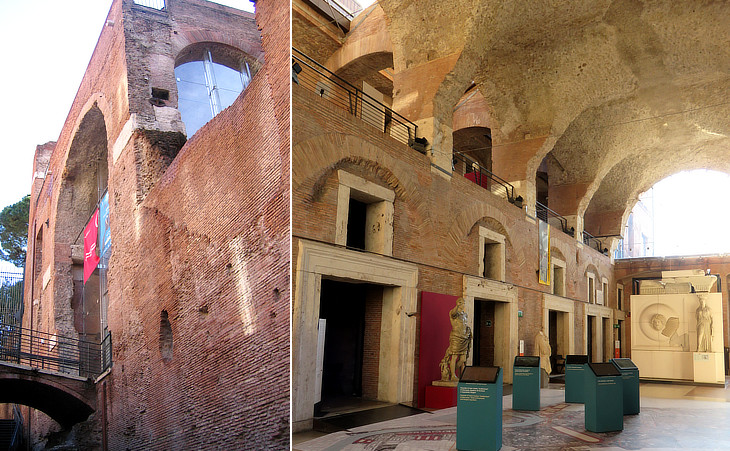 The sixth and highest terrace is mainly occupied by a large rectangular building, the use of which is not fully understood yet. Its two storeys house a small museum providing information on how the emperors enlarged the Roman Forum and reliefs and statues (Museo dei Fori Imperiali - Mercati di Traiano - external link). Some exhibits are shown in the pages covering these forums. 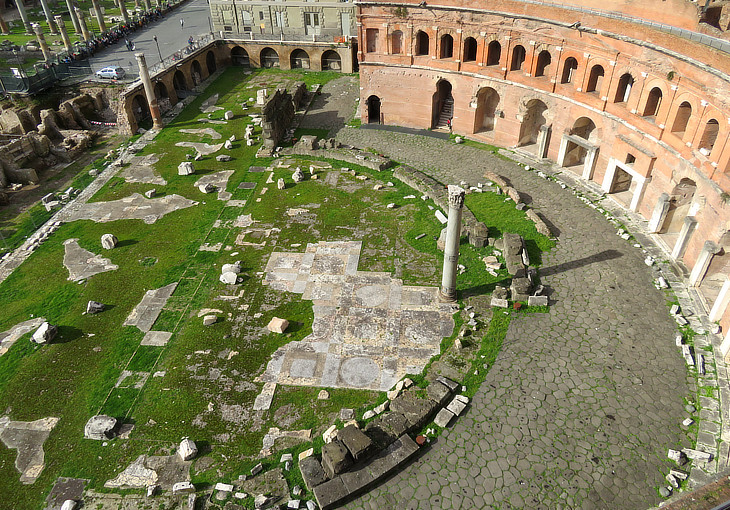 Square of the Great Hemicycle

The large square in front of the Great Hemicycle was paved with coloured marbles, while the shops were paved with mosaics.

Great Hemicycle: marbles in the square and mosaics in the shops

The floor mosaics were designed according to very simple schemes, yet these were different in each shop. A few years later a similar approach was followed in the decoration of the Hospitalia (guest rooms) of Villa Adriana.

Fragments of decorated marbles which embellished the markets

Similar to many other ancient monuments, the markets were stripped of their marbles: the few remaining architectural elements show an elaborate design with a predominance of curved lines.

The upper terraces offer interesting views over Trajan's Forum and the Capitoline Hill. Occasionally Modern Art exhibitions are arranged there. 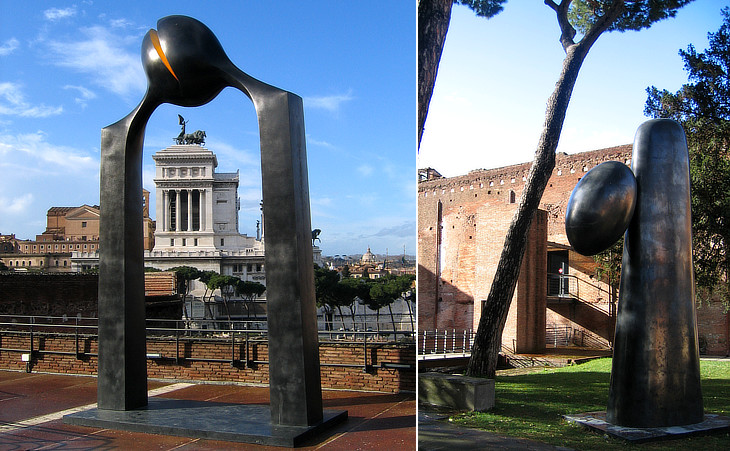 Works by Kan Yasuda, a Japanese sculptor who lives in Italy (January 2008)