Ottorino Respighi (1879-1936) was born in Bologna and studied violin at its conservatorio. He played the violin in St. Petersburg where he became a pupil of Rimskj-Korsakov and in Berlin where he met Max Bruch. In 1913 he was appointed teacher of composition at S. Cecilia. After some initial unsuccessful operas he turned his attention towards symphonic poems, at the time very popular. Berlioz, Liszt, Rimskj-Korsakov, Sibelius and Richard Strauss are among the best known composers of symphonic poems, a sort of pictorial music aiming at portraying events or locations.
In 1916 Respighi wrote Le Fontane di Roma a composition inspired by four Roman fountains. The first performance in 1917 was met by a lukewarm success, but in 1918 a new performance directed by Arturo Toscanini gave celebrity to Respighi. 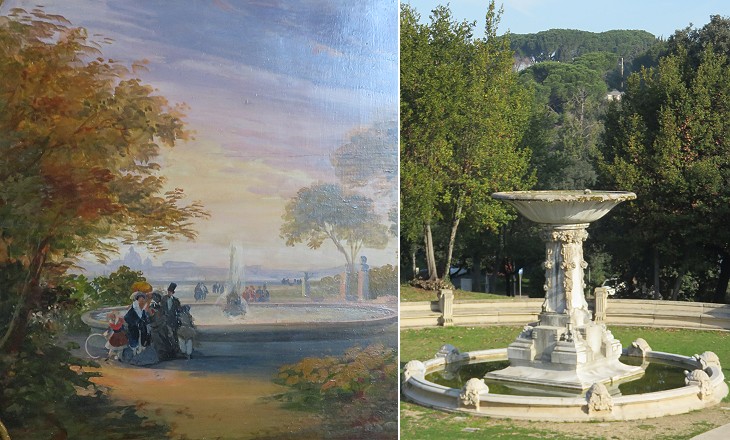 The fountains chosen by Respighi were:
the fountain of Valle Giulia at dawn (Andante mosso)
Fontana del Tritone in the morning (Vivo, Un poco meno allegretto, Più vivo gaiamente)
Fontana di Trevi in the afternoon (Allegro moderato, Allegro vivace, Più vivace, Largamente, Calmo)
the fountain opposite Villa Medici at sunset (Andante, Meno mosso, Andante come prima)
While the Tritone and the Trevi fountains were well known Roman landmarks, the other two fountains lacked the same celebrity.
Valle (valley) Giulia is a depression between the rear part of Villa Borghese (near Tempio di Esculapio) and Monti Parioli, a hilly area to its north. The site was chosen for the erection in 1911 of Galleria Nazionale d'Arte Moderna and two fountains were located on the monumental steps leading from Villa Borghese to the gallery. When Respighi wrote his poem the area was almost out of town and the musical theme has pastoral suggestions (I do discourage going there at dawn today). 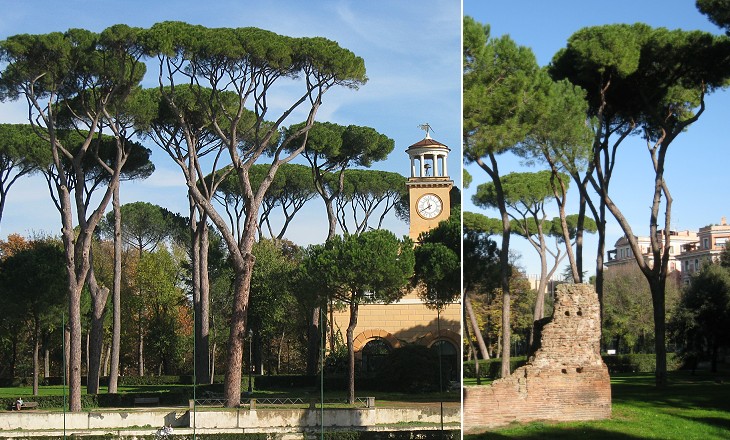 In 1924 Respighi wrote a second symphonic poem, again inspired by Rome, not by its monuments but by its pines.
The first theme is dedicated to the pines of Villa Borghese and to the children who play under their shadow.
The Villa has a variety of trees. The finest pines are located around Piazza di Siena (image on the left) but many other pines can be found in its southern and western parts, while the older part of the Villa, behind the Casino, is an Italian garden with fewer pines. 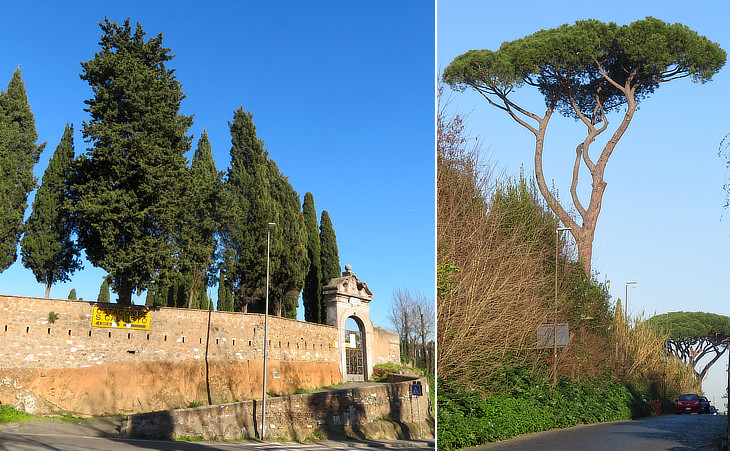 (left) One of the entrances to Catacombe di S. Callisto; (right) a lonely pine along Via Appia Antica inside the premises of the catacomb
(Lento, Più mosso, Ancora più mosso, Poco meno, Più lento)

The second theme is in sharp contrast with the first, Respighi abandons the joyful sounds of the children playing and moves to the pines next to a catacomb. It is not easy to locate these pines. The catacombs of S. Callisto (a property of the Holy See) have been decorated with long alleys of cypresses, chosen as a symbol of mourning. Maybe Respighi had in mind a lonely pine along Via Appia Antica. 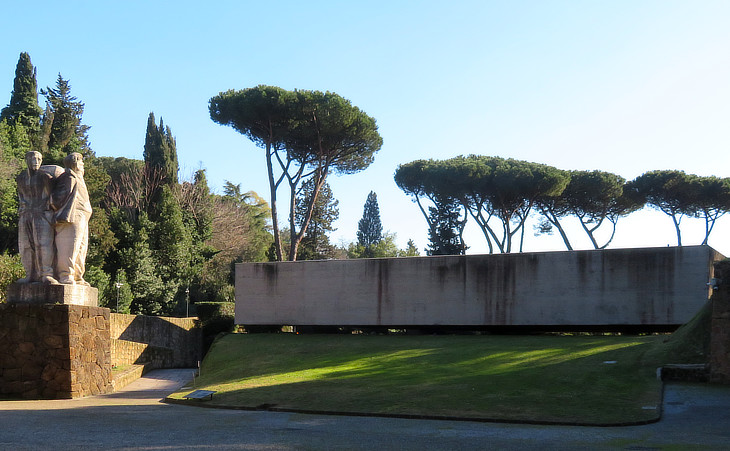 Pines at the Fosse Ardeatine

Very close to the catacombs there are other pines next to a sort of modern catacomb. In March 1944 a bomb exploded in Via Rasella, near Palazzo Barberini just as a platoon of German troops was marching by, killing 33 soldiers. In retaliation 335 Italians, either detained for political and racial reasons, or picked at random, were killed in a tufa cave (Fosse Ardeatine) near the catacombs. The heavy block covering the 335 tombs is surrounded by an impressing ring of pines. 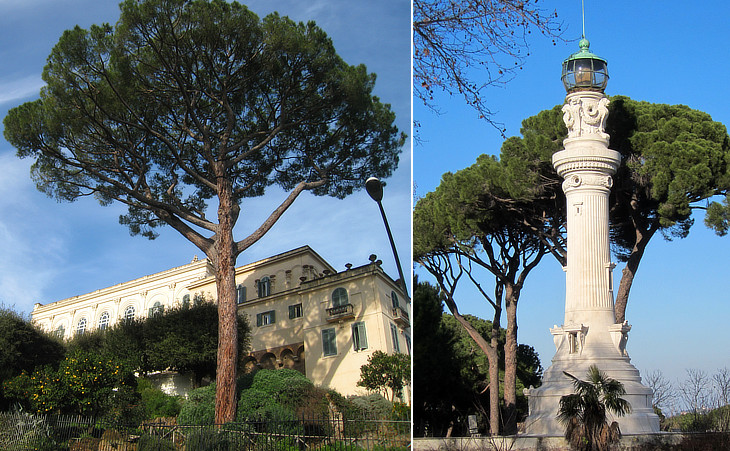 Pines entirely covered the Janiculum and even when the hill was divided into villas, only a fraction of them were sacrificed to the design of gardens. Villa Pamphilj was called del Bel Respiro (fine breathing) due to its many pines. In 1880-1884 a modern promenade leading to Monumento a Giuseppe Garibaldi opened the Janiculum to the public. The avenue was flanked by plane-trees in accordance to the then prevailing taste, but nevertheless a certain number of pines were left in place and they still frame the monuments of Rome, as they did in the 1765 Grand View of Rome by Giuseppe Vasi.
The musical theme mirrors a nightingale singing from a pine. 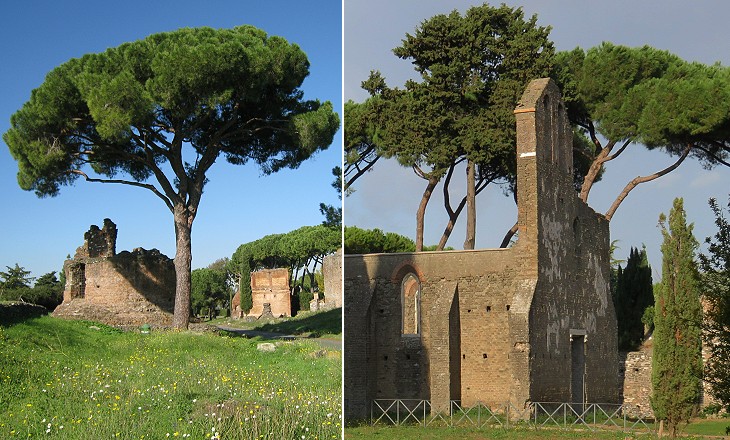 Via Appia Antica is flanked by cypresses and pines: next to many Roman tombs there is a pine and pines surround the abandoned church of S. Nicola di Bari opposite Cecilia Metella. The pines of Via Appia Antica suggested a melancholic theme, but the second and the third parts of the poem had already a very Lento movement and thus Respighi associated the pines of Via Appia Antica with the marching of the Roman legions returning from a victory in the East and he closed his work with a triumphal march. In 1924 the government of Mussolini was evolving into a totalitarian regime where the memories of Ancient Rome were exploited to support aggressive and nationalist policies. This may have influenced Respighi.
I Pini di Roma was an immediate success and in a way it consecrated the pine as the tree of Rome.
In 1976 I Pini di Roma was excellently recorded by Lorin Maazel and The Cleveland Orchestra. 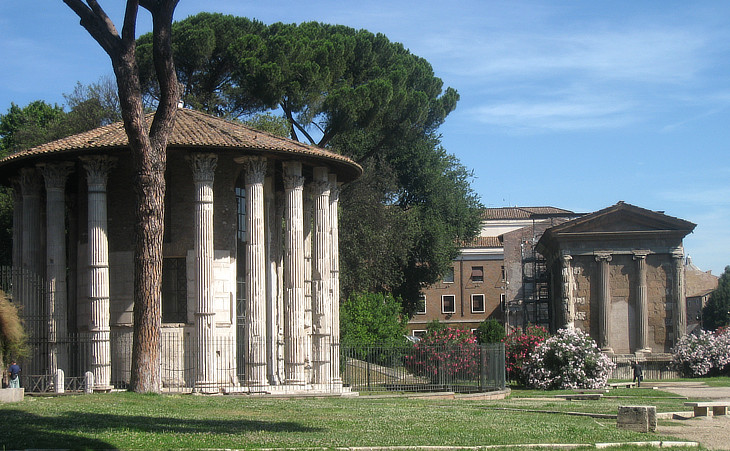 The popes had mainly used elms to embellish the largest Roman roads: some streets leading to S. Maria Maggiore (one of them is still called Via dell'Olmata) and the road crossing Campo Vaccino were both flanked by elms. After the annexation of Rome to the Kingdom of Italy in 1870, plane-trees became fashionable and they were used for the new roads along the river.
In the 1930s it was the turn of pines to be chosen mainly to embellish the archaeological areas (e.g. the Palatine) and the most evocative sections of the ancient walls (e.g. those near Piramide di Caio Cestio). Pines were often planted in association with cypresses and oleanders, but today there are not many oleanders left.