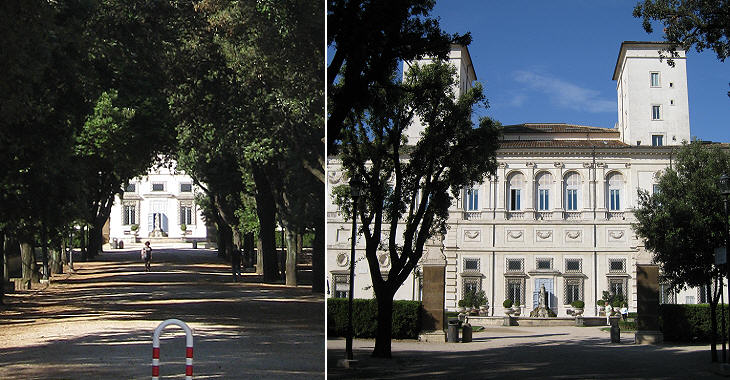 (left) Alley leading to the northern side of the casino; (right) northern precinct

The private gardens were less affected by changes made by the Borghese in the late XVIIIth century than the public ones. In 1807 they lost many of the statues and reliefs which decorated them, because Prince Camillo Borghese sold them to Napoleon Bonaparte. Open spaces replaced some of their woodland after they became a public garden in 1901. 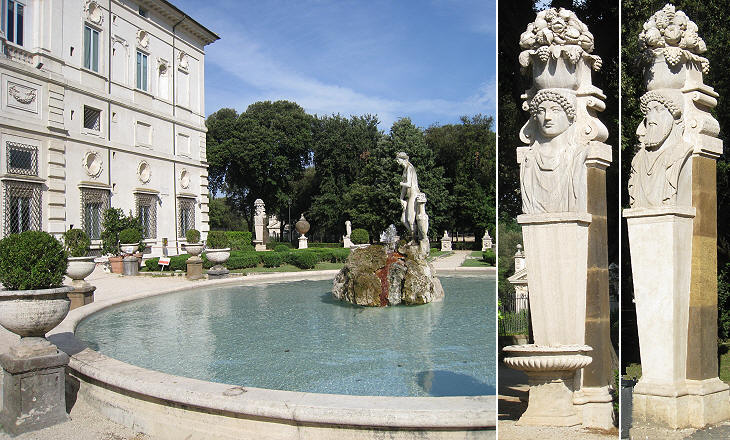 The original fountain in front of the casino was very different from the current one: its basin was similar in shape to Fontana del Moro, while its upper part resembled that of Fontana di Sisto V; it had on top a statue of Narcissus. Villa Borghese could rely on a constant supply of water thanks to a short aqueduct which branched off Acqua Felice.
Jacopo Manilli, head gardener of the villa, wrote in 1650: The herms were placed as if kindly to invite the guests to enjoy the delights of the garden. They are modern works by Pietro Bernini assisted by his son, the Cavaliere Lorenzo, when he was still a young man, who carved the fruits and flowers.
You may wish to see the herms of the gardens of Palazzo Farnese di Caprarola. Statues and vases decorating the garden around Fontana di Venere

The statues embellishing the garden were made more attractive by being placed on elaborate pedestals, which were very often decorated with eagles and dragons, the Borghese heraldic symbols. Reliefs in the private gardens

The subjects of the reliefs placed in the garden are not linked by an obvious thread; perhaps those representing wild animals and in particular elephants were an indication of the desire by Cardinal Scipione Caffarelli Borghese, the founder of the villa, to show his guests a real elephant (Pope Leo X had a white elephant); the villa had a cage with lions and enclosures with gazelles and ostriches; peacocks were left free to wander about. The villa was inherited by his cousin Marcantonio II, Prince of Sulmona, a town in the Kingdom of Naples. 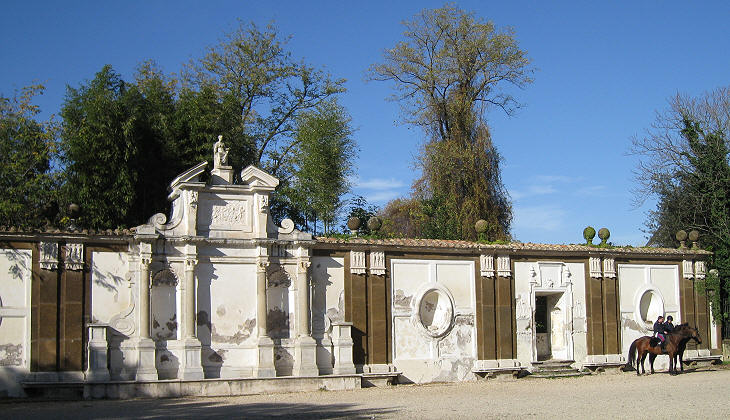 The private garden had two main alleys: one led to the casino, the second one was perpendicular to the first and it ended at Teatro, more exactly the hypothetical reconstruction of a scaenae frons, the wall on the back of the stage in a (small) Roman theatre. In the second half of the XVIth century Pirro Ligorio and Andrea Palladio published reconstructions of the ancient monuments of Rome, including its theatres. You may wish to see the "theatre" of Villa Pamphilj and the reconstructed imposing scenae frons of the Roman theatre of Sabratha. 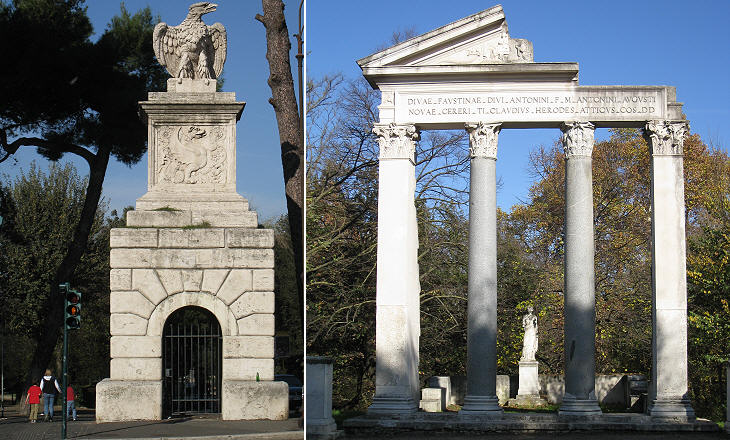 (left) One of the two pillars at the modern entrance to Villa Borghese (the eagle is shown in the image used as background for this page); (right) Tempio di Annia Faustina e Cerere

Prince Marcantonio IV Borghese (1730-1800) married Marianna Salviati, the last of that family and in 1769 he won a legal battle with the Doria Pamphilj about some possessions of the Aldobrandini (the last of the Aldobrandini had married first a Borghese and later on a Pamphilj). Having strengthened the finances of the family he embarked on a vast plan which redesigned and enlarged the gardens of Villa Borghese and modified the internal decoration of the casino (the latter is covered in page three); in this task he was assisted by Antonio and Mario Asprucci, the family architects, who were aware of the new neoclassical trends.
Prince Borghese bought an adjoining estate and by this purchase the villa bordered on Porta Pinciana. The Asprucci designed a new entrance opposite the gate, not in the form of a traditional portal as that shown in page one, but of two tall pillars decorated with the Borghese's heraldic symbols (the traditional iconography of the dragon was modified); today the two pillars are in a slightly different position.
The Asprucci placed the fake ruins of a Roman temple at the end of an alley; its design and the dedicatory inscription indicate that they had in mind a temple to Annia Faustina and Ceres near Via Appia Antica, although they replaced the two side columns with pillars.
What a strange idea - what a needless labour - to construct artificial ruins in Rome, the native soil of ruin! But even these sportive imitations, wrought by man in emulation of what time has done to temples and palaces (..) have grown to be venerable in sober earnest. The result of all is a scene, such as is to be found nowhere save in these princely villa-residences in the neighbourhood of Rome; a scene that must have required generations and ages, during which growth, decay, and man's intelligence wrought kindly together, to render it so gently wild as we behold it now.
Nathaniel Hawthorne - The Marble Faun - 1860. 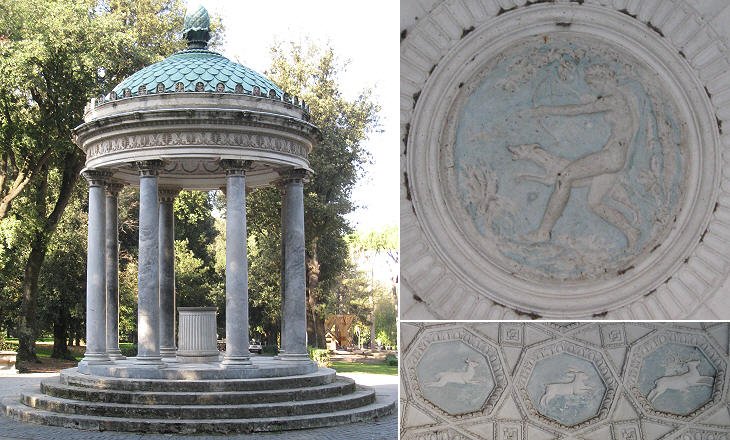 William Kent (1685-1748) was an architect who played a major role in defining the pattern of English landscape gardens; he spent some time in Rome between 1710 and 1719, where he became acquainted with its ancient and modern buildings; after his return to England he designed gardens where he placed temples and statues in a "natural" environment, rather than in the neatly designed spaces of Italian gardens.
In particular he was impressed by Tempio di Vesta at Tivoli and similar round temples made their appearance in the gardens he created and in those of his followers.
This new trend in gardening was known to Prince Marcantonio Borghese also because one of the painters in charge of embellishing the casino was Jacob More, a landscape Scottish painter. The Asprucci were asked to build a round temple in the "English fashion"; the decoration of the interior has a definite Wedgwood flavour. The statue of Diana which was placed inside the temple is now at the Louvre Museum in Paris. You may wish to see a similar temple in the gardens of Schloss Nymphenburg near Munich. 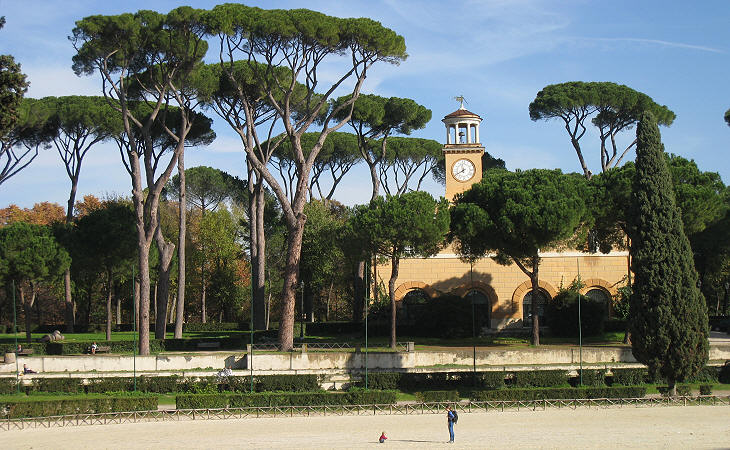 Ragnaia (after Italian ragno = spider) was the name given to a structure of poles supporting nets which were used to catch birds for the aviary. The Asprucci used this vast space to design a low amphitheatre having the shape of those at Villa Mattei in Rome and at Boboli Gardens in Florence. It is named Piazza di Siena because the Borghese had their roots in that town. Since 1928 it is the venue of an international showjumping event. (left) La Fortezzuola, today Museo Pietro Canonica, an Italian sculptor (1869-1959) who had his studio there; (right) coat of arms of Cardinal Gabriele Rangoni on the well in the courtyard

Casa del Gallinaro (hen-house) was the name of a small building which was used to house not only hens, but also peacocks and ostriches. The Asprucci turned it into a sort of medieval fortress. The presence of a well in the enclosure is misleading because it comes from one of the cloisters of the Franciscan convent of S. Maria in Aracoeli. It is decorated with a very fine relief of the school of Andrea Bregno which shows the coat of arms of Cardinal Gabriele Rangoni; he entered the Orders of the Friars Minor Observants (Franciscans) in 1447; he was the papal envoy at the court of Matthias Corvinus, King of Hungary; his presence in Rome is recorded in 1486, when he took part in the conclave which elected Pope Innocent VIII. The cloisters were demolished in the late XIXth century. The most important addition to the public gardens was a temple on an islet in an artificial pond; the whole complex was surrounded by rocks and caves and it was accessed through serpentine walks. This setting was modified by the Borghese in 1823 and by the Italian State after the acquisition of the villa in 1901.
Marcantonio Borghese thought he had turned the public section of his villa into an English garden, but English visitors continued to regard it as an Italian garden with some follies.
Prince Camillo Borghese bought other estates and Villa Borghese reached Porta del Popolo, opposite which a new entrance was built by Luigi Canina in 1827. 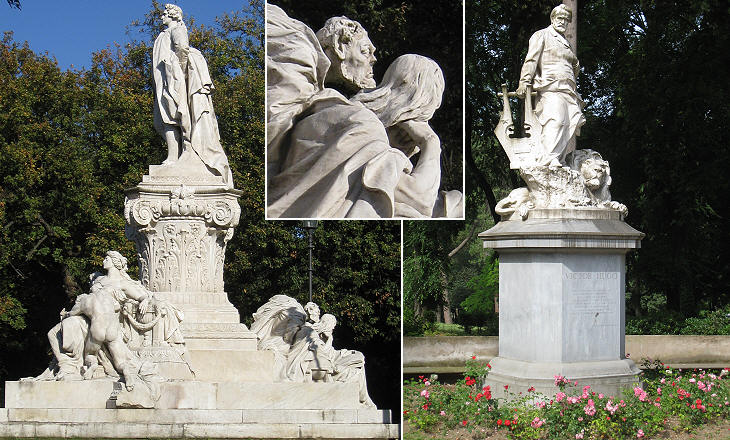 Monuments to Goethe (left) and Victor Hugo (right); in the inset Mephistopheles and Faust

In 1903 Emperor William II of Germany donated a Monument to Goethe by Gustav Eberlein to the Italian State; the poet is shown standing on a colossal Corinthian capital and is surrounded by statues portraying characters of his works Iphigenia in Tauris, Mignon and Faust.
Two years later the Romans watched the arrival of a French reply to the German gift: a monument to Victor Hugo by Lucien Pallez; because the French writer's association with Rome was rather loose (he visited the city when he was six) the inscription quoted a speech he made to praise Giuseppe Garibaldi.
They were the first of a long series of other similar monuments which were placed in Villa Borghese. 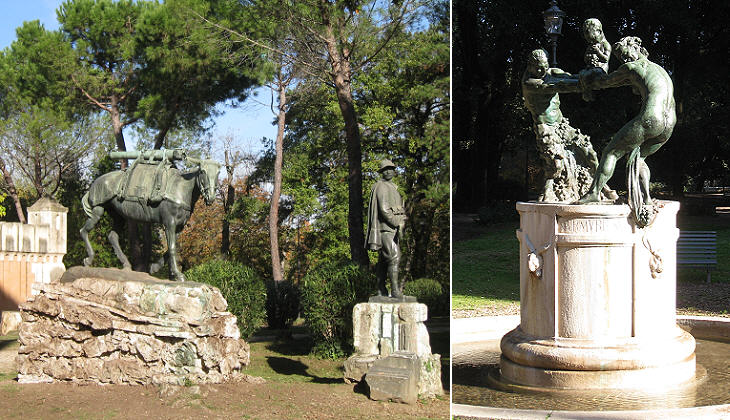 (left) Monumento all'Alpino, a mountain warfare corps of the Italian Army, by Luigi Canonica. Initially it was a monument to the mule (1940), the soldier was added in 1957; (right) Fonte Gaia by Giovanni Nicolini (1928)

Go to page three to peer inside the casino or return to page one.