You may wish to learn about the town first. 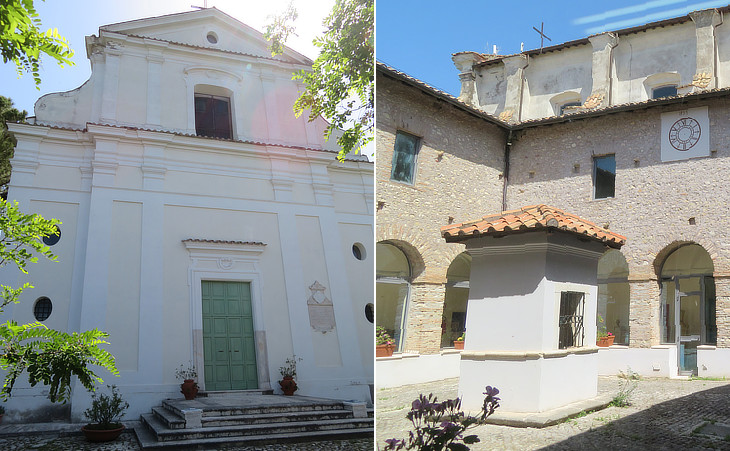 The church and the adjoining Franciscan convent stand on the southern hill of Montecelio and they enjoy a commanding view over the castle of the town. Their construction originated from the bequest of a local wealthy man of a small building with an adjoining chapel. The building was turned into a convent having a small courtyard with a well at its centre. In 1724 it was decided to replace the chapel by erecting a proper church which was completed by 1740. During WWII the convent was occupied by squatters and eventually it was abandoned.

Fresco in the cloister which portrays Pope Innocent III who dreams of St. Francis who holds up S. Giovanni in Laterano, a symbol of the Church of Rome, which is about to collapse

The cloister retains some naive frescoes depicting miracles or events of the life of St. Francis. In one of them Innocent III, portrayed as an XVIIIth century pope, has the dream which will convince him to endorse the preaching of St. Francis, which initially he had regarded with suspicion because its call for poverty and humility seemed an indirect criticism to the political role of the pope.
In 1979 the property of the convent was acquired by the City of Guidonia Montecelio and in 2012 an archaeological museum was inaugurated in its premises. 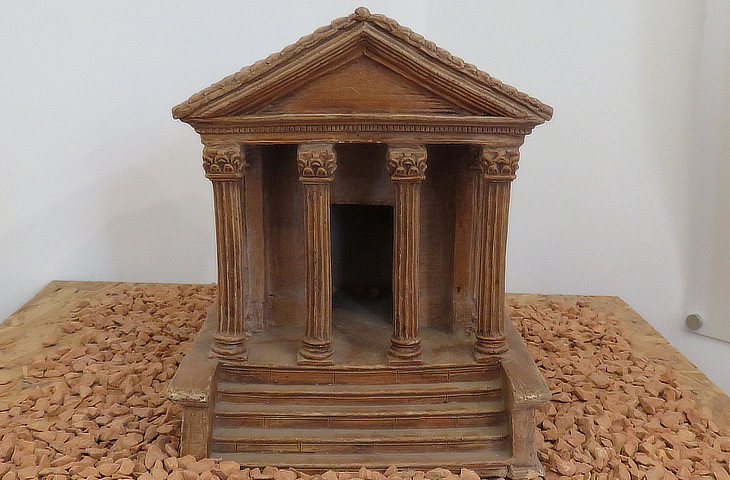 Scale model of the temple which stood at Montecelio

The museum is dedicated to Rodolfo Lanciani (1845-1929), a leading archaeologist and cartographer, who was responsible for supervising all the excavations within the city of Rome in the late XIXth century. He himself carried out a number of these excavations and made several important discoveries, including the House of Vestals in the Roman Forum. He was born in a family of Montecelio and his father worked as a chief engineer in the Papal administration. Rodolfo's first contact with archaeology occurred at Montecelio where he investigated the site of the Castle where he discovered evidence of a small temple. In a speech he delivered at Montecelio in 1922 he claimed Civis corniculanus sum!, i.e. "I am a citizen of Montecelio", Corniculi being the Roman name of the town. 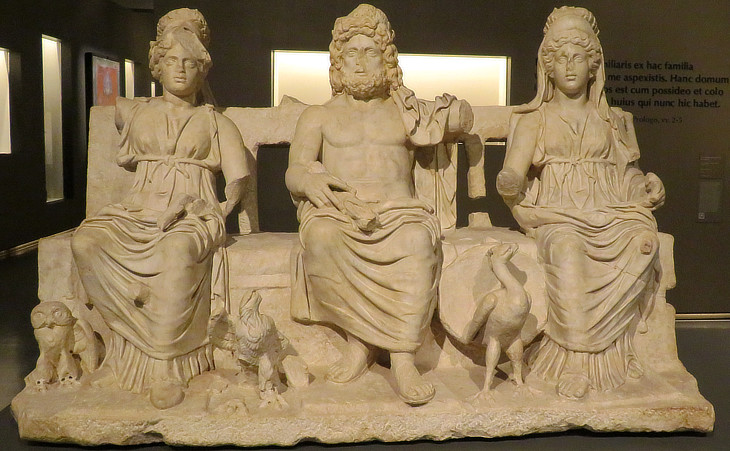 In the centre of the temple, with Juno on his left, and Minerva, on his right side, the Thunderer sat on a throne of gold, grasping the lightning in one hand and in the other, wielding the sceptre of the universe.
John Chetwode Eustace - A Classical Tour through Italy in 1802
Juno and Minerva were worshipped with Jupiter in a temple on the Capitoline hill, thus forming the Capitoline Triad. Capitolia, i.e. temples dedicated to the three gods, were erected in many towns of the Empire, from Thugga in Tunisia to Scarbantia in Hungary. Usually statues of the gods were placed into separate niches (or small temples e.g. at Sufetula); a unique statue portraying the three gods together was found in the 1990s near Montecelio and perhaps it is a small scale copy of that in the Capitoline temple. 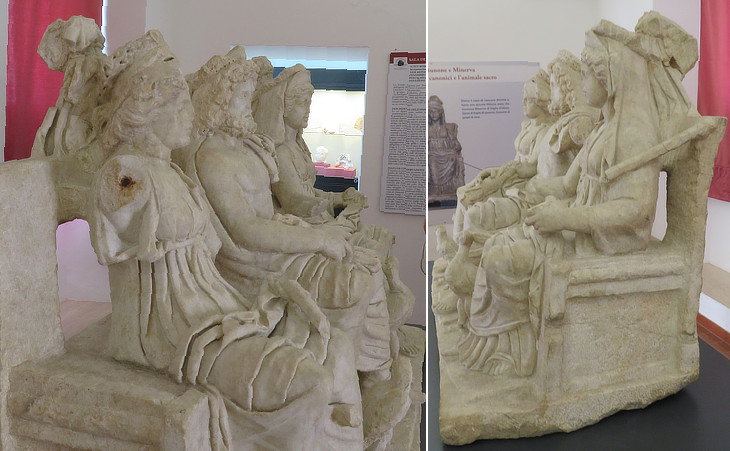 Triade Capitolina: side views showing winged victories behind the heads of the gods and their plain throne

The statue was discovered in 1992 by clandestine diggers in the site of a Roman villa near Montecelio. They sold it to an unscrupulous antiquarian. Rumours about the matter reached Italian authorities and in 1994 the statue was recovered when it was about to be carried abroad. The statue was initially placed at Museo Archeologico Nazionale di Palestrina, but eventually it was decided to assign it to the newly inaugurated museum of Montecelio in order to keep it in the territory where it was found (a similar decision was taken for the Euphronios Krater at Cerveteri). Triade Capitolina: the birds which were sacred to the gods: owl (Minerva), eagle (Jupiter) and peacock (Juno)

Athene had several bird epiphanies, which may be totemistic by origin. In Homer she appears as a sea-eagle and a swallow; in company with Apollo, as a vulture; and in company with Hera, as a dove. On a small Athenian vase of 500 b.c. she is shown as a lark; and Athene the diver-bird, or gannet, had a shrine near Megara. But the wise owl was her principal epiphany.
It is said that Zeus, desiring Ganymedes also as his bedfellow, disguised himself in eagle's feathers and abducted him from the Trojan plain. (..) A royal ascent to Heaven on eagle-back, or in the form of an eagle, is a widespread religious fancy.
Robert Graves - The Greek Myths - 1955
Thus Argus lies in pieces, cold, and pale;
And all his hundred eyes, with all their light,
Are clos'd at once, in one perpetual night.
These Juno takes, that they no more may fail,
And spreads them in her peacock's gaudy tail.
Ovid - The Metamorphoses - Book I - Translation by Sir Samuel Garth, John Dryden, et al 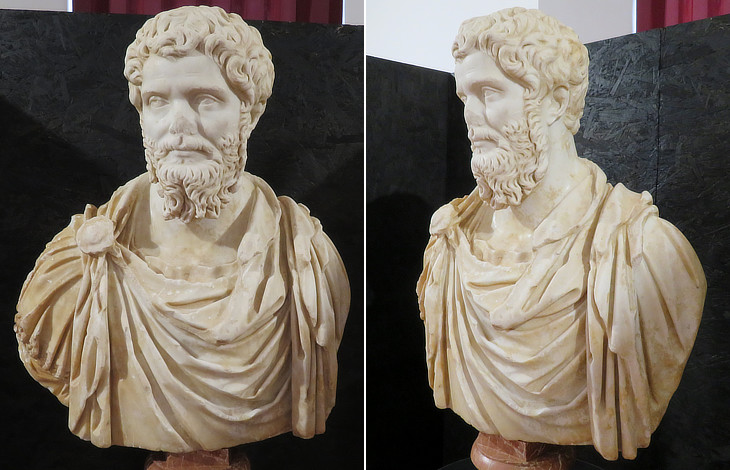 This fine bust is another exhibit which was found by clandestine diggers, who tried to sell it but were discovered by Italian authorities in 2018. Important Roman families used to place in the reception halls of their villas busts of the emperors and of their relatives. Some 40 similar busts which formed an almost complete portrait gallery were found at Chiragan near Toulouse. You may wish to see the Hall of the Emperors at Musei Capitolini. 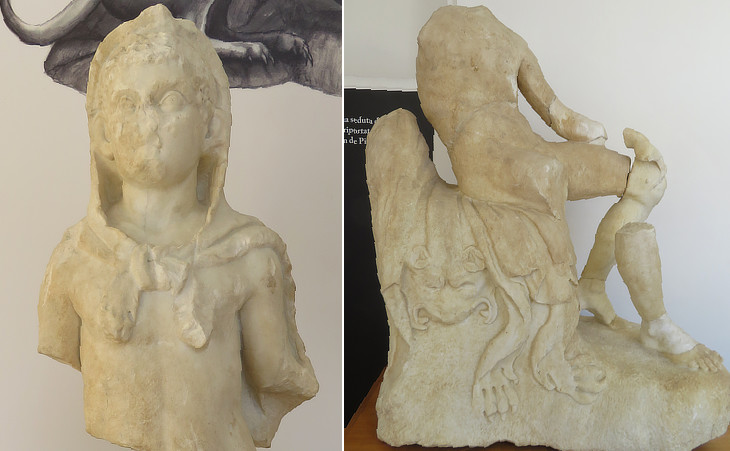 The development of the areas along Via Tiburtina between 1990 and 2010 led to the identification of three Roman villas and two necropolises. The excavation of one of the villas yielded two fine, although broken, statues of Hercules and Dionysus. Hercules wears already the skin of the Nemean Lion which he will slay in adulthood in his first labour and he most likely holds the apples of the Hesperides, as shown in a larger statue which was found in Rome. Dionysus is portrayed while resting on a panther's skin, although the god was associated with a live panther (a term used by the Greeks to generically refer to a big cat). Both gods were widely worshipped in Rome and its environs also in private buildings. The image used as background for this page shows the smiling face of a young marble satyr which also comes from a local Roman villa. 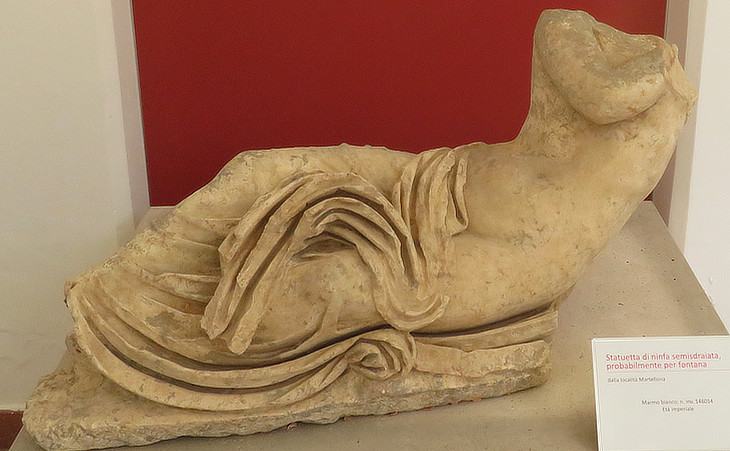 Another Roman villa near Montecelio had a pool or a nymphaeum, a monumental fountain; it was embellished with a statue of a nymph, similar to that at Ninfeo di Egeria. 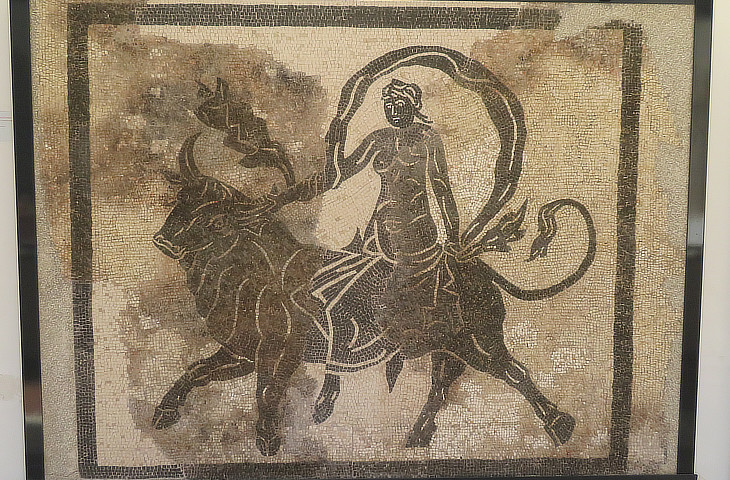 Some of the exhibits are related to old discoveries and before the opening of the museum they were kept in the Town Hall. The Myth of Europa was a popular subject for floor mosaics throughout the whole Roman Empire, from Lullingstone in Kent to Rome and to Byblos in Lebanon the country where Zeus, disguised as a bull, abducted the Phoenician princess. 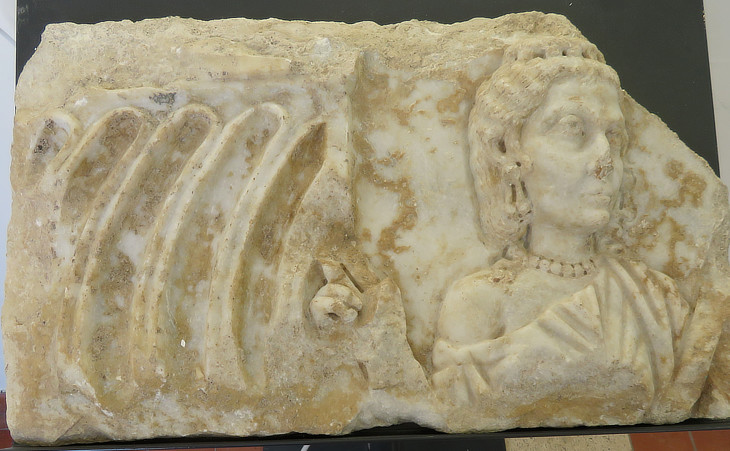 The rambler through the territory of Tibur is made to remember the fate of Zenobia, Queen of Palmyra in various ways which, although lacking authenticity, strike a thoughtful mind none the less. The remains of the thermae at the Sulphur Springs are still called the "Bagni della Regina"; the alleged remains of her villa are pointed out near the railway station of Monticelli. Even certain luscious products of Tiburtine vineyards, the famous pizzutelli (a local oval shaped type of grape), are considered a gift imported from the east.
Rodolfo Lanciani - Wanderings in the Roman Campagna - 1909
Zenobia was defeated by Emperor Aurelian and she followed (tied with golden chains) the chariot of the winner during Aurelian's Roman triumph. According to the traditional account she was subsequently freed and granted a pension and a villa near Tivoli, where she lived happily for the rest of her life. The rich lady who is portrayed in a sarcophagus which was found near Montecelio might have been one of her friends. 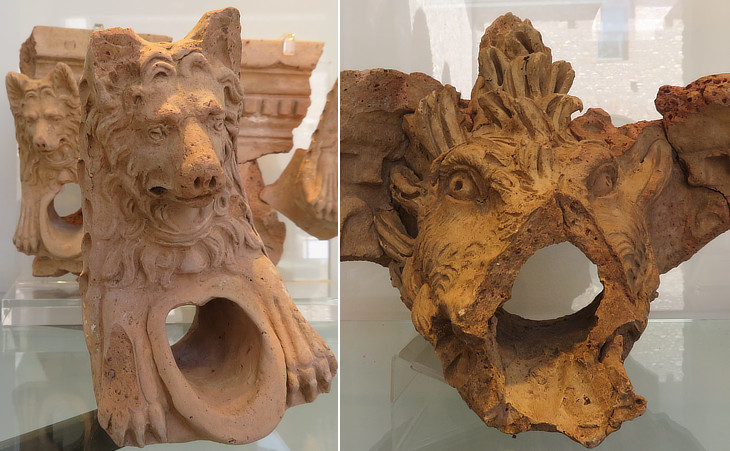 Terracotta gargoyles depicting dogs and a boar from Roman villas

Return to Mentana, Monterotondo and Palombara or to S. Angelo Romano and Montecelio or move to Marcellina and S. Polo dei Cavalieri