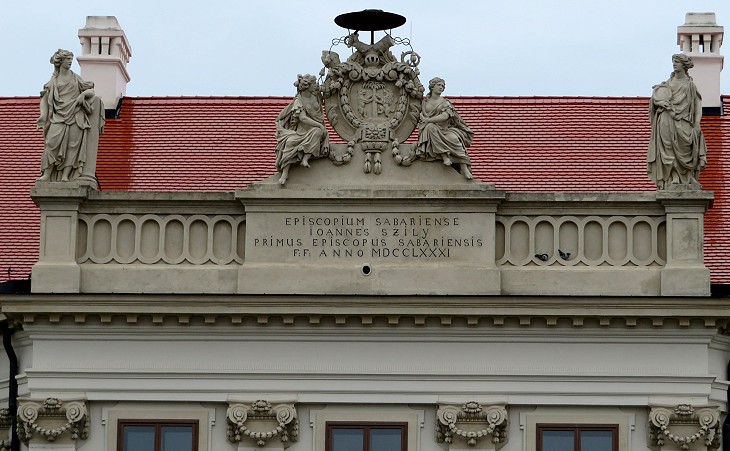 Episcopal Palace: inscription celebrating the creation of the Diocese of Savaria in 1781

Adjoining to the Norici is Lake Peiso (Neusiedler See) and the deserts of the Boii; they are however now inhabited by the people of Sabaria, a colony of the now deified emperor Claudius.
Pliny the Elder - Historia Naturalis - Book III - Translation by John Bostock and Henry Thomas Riley
Steinemanger (Szombathely) is, without doubt, Colonia Claudia Sabaria. (..) It is said, that St. Martin was born at this town in three hundred and thirty-five, his father having been a tribune under Constantine the great.
Richard Pococke - A Description of the East and Some Other Countries - 1745
At the end of the XVIIIth century there was enough historical and archaeological evidence for concluding that Steinemanger/Szombathely was Roman Savaria. Most likely it had been an episcopal see in the IVth century, but there were no records of its bishops, so Ioannes Szily could claim to be its first bishop. 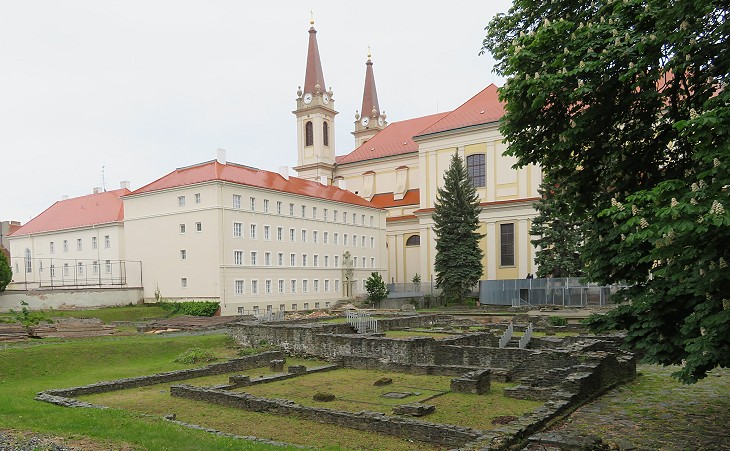 Archaeological garden behind the Cathedral

It is said that the prefect of Panonia (Western Hungary) resided here; and Aurelius Victor affirms, that Septimius Severus was proclaimed emperor at this place. (..) We saw at Steinemanger several pieces of granite pillars. It is probable that Domitian was a benefactor to this town, for there are two inscriptions to him, with the name of Domitian erased, as it was from all his inscriptions by an order of the Senate. There are several other inscriptions, and some curious reliefs about the town. Pococke
In 1938 some ancient remains were discovered during works for the enlargement of the Seminary. Archaeological excavations were carried out to unearth the foundations of the Forum and of some adjoining buildings. 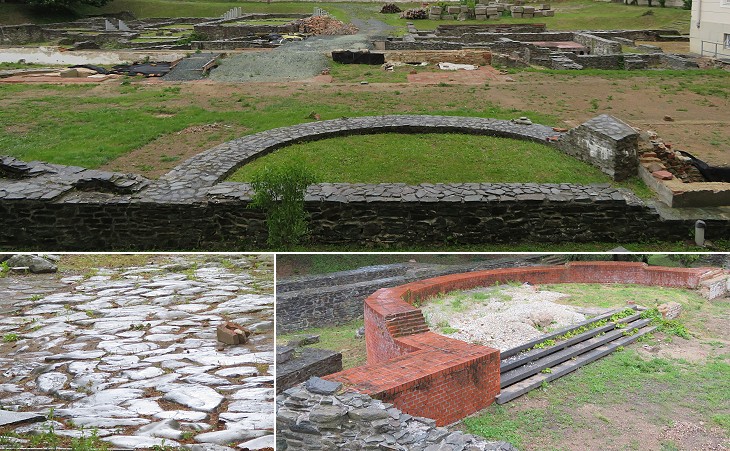 Archaeological garden behind the Cathedral: details

The Roman remains cover a period from the foundation of the town to the IVth century and they include an imperial palace, public baths, a toll-house, a shrine to Mercury, various workshops, sections of Roman roads and fragments of floor mosaics.
Savaria was situated along an important road from Carnuntum to the Alpine passes leading to North-eastern Italy. It acquired particular importance in the IVth century when some emperors resided there during campaigns against the Quadi and other barbarian tribes to repel them beyond the River Danube, which marked the border of the Empire. 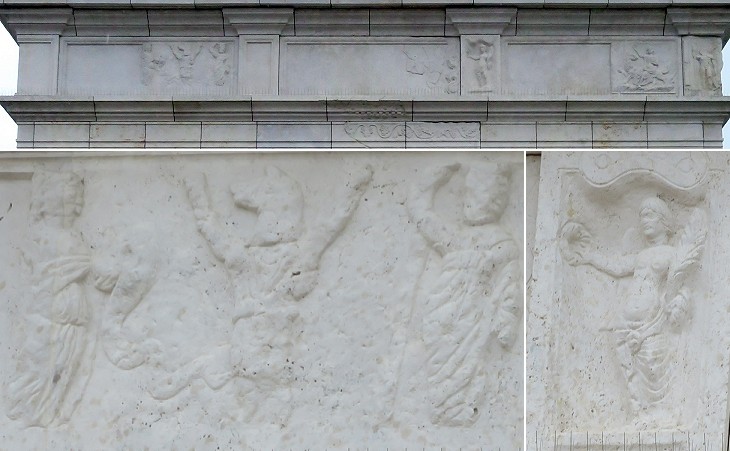 Reconstructed (brand new) Temple to Isis: (above) entablature; (below-left) relief depicting a priest (?) wearing a mask of Anubis, the Egyptian god of the dead, between Hygeia or Isis and Aesculapius or Serapis; (below-right) a victory holding a wreath

Szombathely's Temple of Isis is hailed as one of the most significant remnants of Roman times ever found in Pannonia. Built in the 2nd century A.D., the temple pays tribute to the Goddess Isis. The municipality of Szombathely started reconstruction of the site in June 2008. As a result of these works, the buildings previously flanking the courtyard will disappear, making room for a new interactive exhibition area displaying the finds excavated at the site and items linked to the various religions practised in Pannonia; all arranged with a focus upon the original remnants. The plans also include a reconstruction of the central temple building.
From a leaflet on the main touristic attractions of Szombathely. You can see the outcome of this decision in the introductory page. 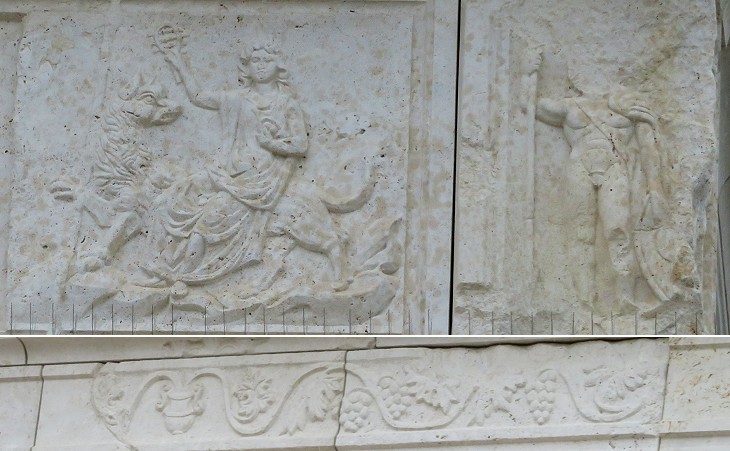 Temple to Isis: (above-left) Isis holding a sistrum and riding Canis Major, the constellation of Sirius, a star which astronomers observed when forecasting Nile floods; (above-right) Mars; (below) a decorative relief

The reliefs were much easier to watch when they were kept in the local museum. The temple was probably built at the time of Emperor Septimius Severus who according to some sources was acclaimed emperor in 193 at Savaria (others say this occurred at Carnuntum). In that period Isis was highly regarded. In ca 160 Lucius Apuleius put these words in the mouth of the goddess: I am she that is the natural mother of all things, mistress and governess of all the elements, the initial progeny of worlds, chief of the powers divine, queen of all that are in hell, the principal of them that dwell in heaven, manifested alone and under one form of all the gods and goddesses. Metamorphoses aka The Golden Ass - Book XI - Translation by Stephen Gaselee 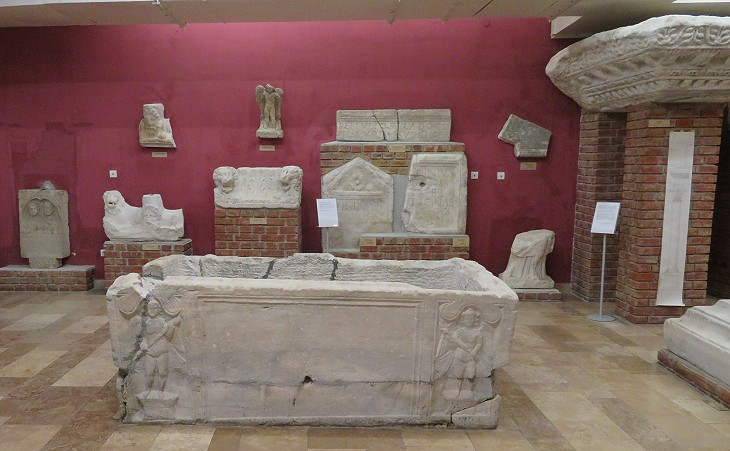 Savaria Museum of Szombathely: in the foreground a sarcophagus without inscription with two genii

The discoveries made during the construction of the Episcopal Palace led to publishing a first account of the history of Savaria and of the remains which had been found. In 1871 a local Archaeological Society was founded with the objective of building a museum to house the many inscriptions, reliefs, statues and architectural elements which the modernization of the town had unearthed. The present collection is very rich, but it is displayed in an old fashion, probably because all available financial resources were poured into the construction of the Temple to Isis. 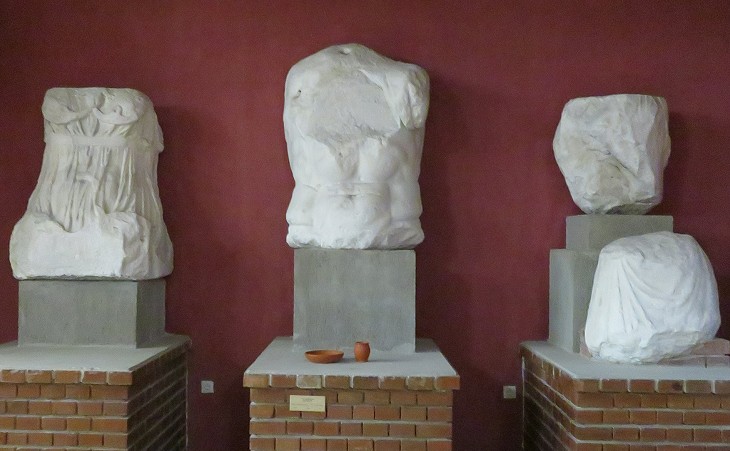 Savaria Museum: statues of the Capitolium: Minerva, Jupiter and Juno

Similar to what occurred at nearby Scarbantia (Sopron), fragments of marble statues of the three gods who were worshipped on the Capitoline Hill of Rome were found near the Episcopal Palace. The Capitolium where they were placed was a temple symbolizing the loyalty of the town to Rome. The statues were most likely made in Italy or in Turkey. Capitolia have been found in all the provinces of the Empire, but in particular in that of Africa (Tunisia); see those at Thuburbo Majus, Thugga and Sufetula. 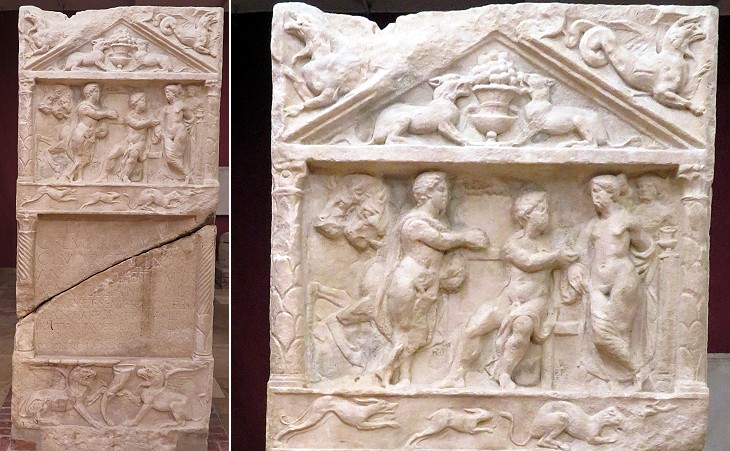 Tombstones are the most frequent exhibits of archaeological museums of towns along the Danube border; they are related to veterans and show their medals/weapons or to civilians who are portrayed at work; the Savaria Museum has some tombstones which depart from these patterns and depict mythological scenes as it was often done on sarcophagi. The finely sculpted relief shown above still puzzles archaeologists who are in doubt whether it depicts Achilles and Briseis or a less known myth about Tyro who bore two twins to Poseidon; she abandoned them and they were saved by a horse herdsman; she eventually married Creteus, her uncle and bore him Aeson, the father of Jason.
The image used as background for this page shows a relief of the Roman she-wolf on another tombstone. 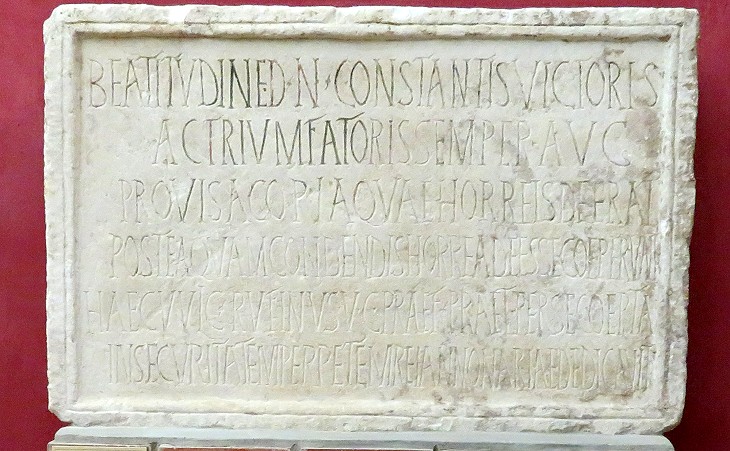 The inscription celebrates the restoration and construction of large warehouses at Savaria by praetorian prefect Vulcacius Rufinus in 346-349. During the IVth century the Romans had great difficulties in checking raids by barbarian tribes right on the River Danube border. For this reason Savaria and Scarbantia, which were at a distance from the frontier, were fortified and provided with storage facilities and armouries.
Vulcacius Rufinus was well aware of the need to ensure an effective supply chain to the troops, because of his personal experience in Gaul.
The soldiers began to rage with impatience at the delay, being the more incensed because they lacked even the necessities of life, since the usual supplies had not yet been brought. Therefore Rufinus, who was at that time praetorian prefect, was exposed to extreme danger; for he was forced to go in person before the troops, who were aroused both by the scarcity and by their natural savage temper, and besides were naturally inclined to be harsh and bitter towards men in civil positions, in order to pacify them and explain why the convoy of provisions was interrupted.
Ammianus Marcellinus - Roman History - Book XIV - Loeb Edition 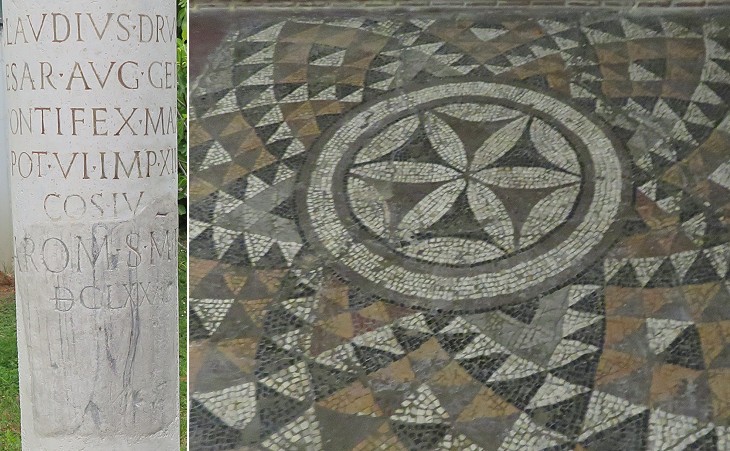 Valentinian lingered at Acincum (today's Budapest), since the autumn was swiftly passing on, and being in lands where the cold weather always covered everything with ice, he looked about for suitable winter quarters; and he could find no convenient place except Savaria, although that town was then weak and had suffered from repeated misfortunes. (..) The fate which had long been designed to end the emperor's labours foretold his approaching end by a repeated series of portents: (..) at Savaria, where the emperor was still settled (in 375), an owl perched on the top of the imperial bath, and uttered notes foretelling death; and no skilful hand could bring it down with arrows or with stones, although many vied with one another in eager attacks upon it. Again, when he was on his way from the aforesaid city to a campaign, he wished to go out through the same gate by which he had entered, in order to gain an omen that he would quickly return to Gaul; but while the neglected place was being cleared of accumulated debris, the iron-clad door which barred the exit was found to have fallen, and could not be removed by the greatest efforts of a large number of men; and to avoid wasting a day there, he was forced to go out by another gate. And on the night before the day which was to deprive him of life, he had a vision (as men often do in their sleep); he saw his absent wife sitting with disordered hair and dressed in mourning attire; and it was possible to infer that she was his own Fortune, on the point of leaving him in the garb of sorrow. Then the next morning, when he came out somewhat gloomy and with frowning brow, the horse that was brought to him would not allow him to mount, but reared its fore feet high in the air contrary to its usual manner; whereupon the emperor fell into one of his innate fits of anger and, being naturally cruel, ordered the groom's right hand, which as usual had supported him in leaping on to the animal, to be cut off. And the guiltless young man would have suffered a cruel fate, had not Cerealis, the tribune in charge of the stable, at the risk of his own life postponed the terrible wrong (on that same day the Emperor died of a stroke after having received a Quadi deputation). Ammianus Marcellinus - Book XXX - translation by John C. Rolfe
In ca 445 Savaria was conquered by the Huns of Attila and in 456 what was left of the town was destroyed by an earthquake.