Views of Torrita Tiberina from NE and SW

Torrita Tiberina is located on a ridge which is almost entirely encircled by the Tiber and it enjoys fine views over the valley both northwards and southwards.

A simple gate is the only access to the town: a few steps on the main (almost the only) street lead to the main square which has balconies on both sides. The small palace which served as the residence of the owners of Torrita, bears the coat of arms of the Torlonia, who acquired it in the XIXth century, when they became the richest family of Rome. 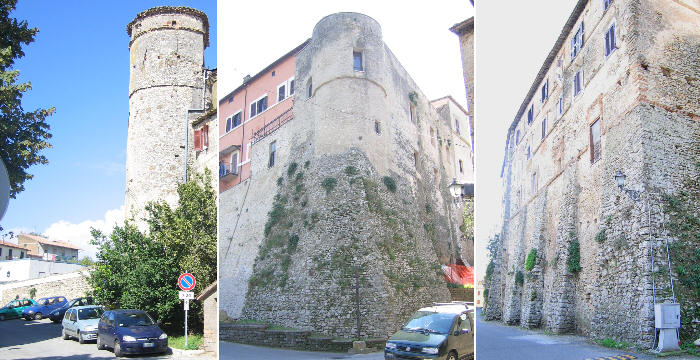 Torrita owes its name to the medieval towers (It. torri) which protected it: not so much from foreign enemies, but from assaults by local troops in the then frequent clashes between rival Roman families, especially the Colonna and the Orsini.

First entrance to the town

Filacciano has the same layout of the other towns, but its appearance is very different due to a XVIIth century face-lift aimed at facilitating the farming activity of its inhabitants. S. Martino al Cimino and Oriolo are other examples of attempts to improve the living conditions of farmers and to better organize their work.

Two long and low buildings housed stables and small flats for the servants. From an architectural viewpoint the buildings provided a double wing to the main palace built on the site of an old fortress.

Palazzo del Drago; small piers with the moons of the Muti Papazzurri

Filacciano belonged to the Orsini and then to many other Roman families until in 1853 the fief of Filacciano was acquired by the del Drago. The main palace however is decorated with the heraldic symbol (a moon crescent) of the Muti Papazzurri who bought Filacciano in 1674 (the image used as a background for this page shows a coat of arms of a Cardinal Orsini in the rear part of the town gate). You may wish to see a page with a list of the historical Roman families and their possessions.

Coats of arms of the Orsini and of the Muti Papazzurri: heraldic symbol of the Del Drago

Ponzano has lost in part its medieval layout which was very similar to those of the nearby towns. There is no longer an entrance gate, but it still has a winding street leading to the parish church. Ponzano belonged for centuries to Abbazia di S. Paolo alle Tre Fontane.

The remaining fortifications of Ponzano have little interest, but two churches in the immediate surroundings of the town are rather picturesque: Sant'Andrea in Flumine (river) is located very near the Tiber and retains its old fortified tower, turned into a bell tower at a later stage. S. Sebastiano is on the top of a hill overlooking the highway.

Move back to Fiano Romano, Civitella S. Paolo and Nazzano.