Mausoleum of the Mauretanian Kings

The Kubber Romeah, The Roman Sepulchre, or The Sepulchre of the Christian Woman, is situated upon the mountainous Part of the Sea Coast, seven Miles to the E. of Tipasa. According to the Discoveries hitherto made, It is a solid and compact Edifice; built with the finest Free Stone. The Height I computed to be a hundred Foot. The Figure of this Structure and the received Opinion of It's being erected over a large Treasure, might induce the Turks to call It The Treasure of the Sugar Loaf. The Point is now wanting; and, by the frequent Searches after This Treasure, several other Parts of It are broken down and defaced. However, It is still of a sufficient Height to be a convenient Landmark for Mariners. (..) The Kubber Romeah should be the same Structure (..) that Mela (Pomponius Mela, a Ist century AD Roman geographer) placed betwixt Lol (Cherchell) and Icosium (Algiers) and appropriateth to the Royal Family of the Numidian Kings.
Thomas Shaw - Travels, or, observations relating to several parts of Barbary and the Levant - 1738 Mausoleum of the Mauretanian Kings

The resemblance to the Medrassen (a mausoleum in the region of Cirta), or Tomb of the Numidian kings, from whom Juba II was descended, is a presumption that it was erected by him in imitation of his ancestral mausoleum. Juba II married Cleopatra Selene, daughter of the celebrated Egyptian queen and of Marc Antony, and there is every probability that this monument served only as his tomb and that of his wife who died before him. It is hardly likely that the remains of his son Ptolemy, the last of his race, could have been transferred from Rome to Africa. The tomb must have been violated at a very early period in search for hidden treasure. A careful examination of the accumulated earth and dust within revealed traces of successive races who had visited the place, some of whom had even made it a place of residence, but none whatever of the bodies for whose reception it had been erected.
John Murray - Handbook for Travellers in Algeria and Tunis - 1878
When it was in a perfect state of preservation, with its covering of marble, its bronze ornaments, and crowned by some colossal statue, it must have presented a grand appearance. Even to-day, in spite of the ravages of time and man, when seen carved against the sky, it is difficult to take one's eyes from it.
Gaston Boissier - Roman Africa, Archaeological Walks in Algeria and Tunis - 1898 - Translation by A. Ward 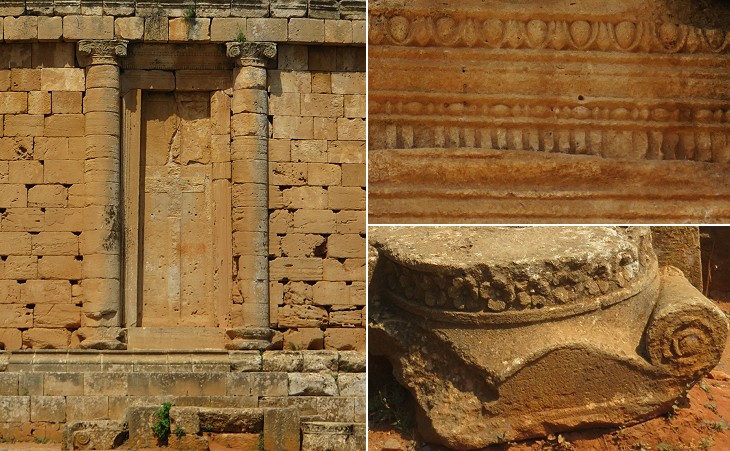 Mausoleum of the Mauretanian Kings: (left) one of the fake doors; (right) details of the decoration

It is called by the Arabs Tomb of the Roman, or rather Christian woman. (..) Various explanations are given of this name. (..) The colonnade has at the cardinal points four false doors, the four panels of which, producing what may have been taken to represent a cross, probably contributed to fix the appellation of Christian to it. (..) The base is 198 feet in diameter, and forms an encircling podium, or zone, of a decorative character, presenting a vertical wall, ornamented with sixty engaged Ionic columns, surmounted by a frieze or cornice of simple form. (..) Above the cornice rise a series of thirty-three steps, which gradually decrease in circular area, giving the building the appearance of a truncated cone. Murray 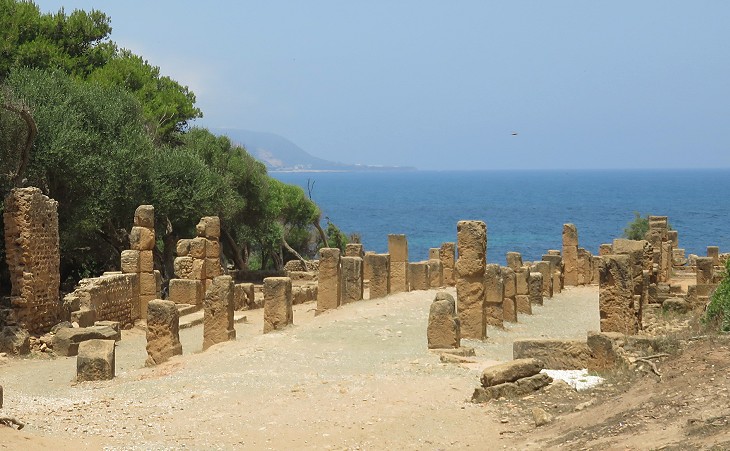 Tipasa is but a small village created in 1859. It is beautifully situated on rising ground close to the sea, with a splendid stretch of sandy beach to the west. It is much frequented by sea-bathers in summer, and is at all times a pleasant place of sojourn for a few days. It has a small harbour in which coasting steamers or yachts can lie in safety during ordinary weather. The great interest of Tipasa, however, lies in its past history and its extensive Roman remains. Excepting on the site of the present village, the outlines of the ancient city are still clearly distinguishable. The sea, which is constantly advancing, has thrown down part of the rocks on which it stood, and like too many other places in Algeria, it has served as a quarry for modern buildings both in Turkish and French times. Murray 1895 Edition 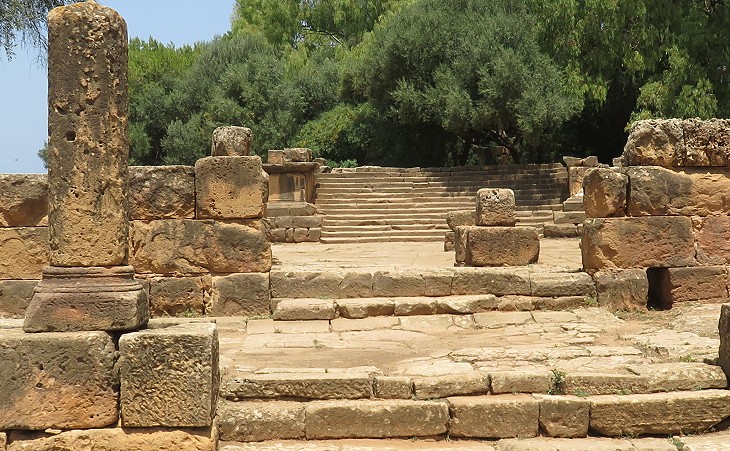 A section of Decumanus Maximus (main east-west street) in the foreground and steps of the "New" Temple in the background; the image used as background for this page shows a relief on a sarcophagus along the street

The Decumanus Maximus is a section of the road which linked Icosium to Caesarea Mauretaniae (Cherchell), the capital of the Roman province. Tipasa was founded by the Phoenicians/Carthaginians and Emperor Claudius granted its citizens "Latin rights", a status inferior to that of Roman citizenship, but which allowed them to freely trade and migrate. Emperor (Aelius) Hadrian gave them full Roman citizenship rights and the town was renamed Colonia Aelia Augusta Tipasensium. The new status meant also that the town was directly ruled by Rome; Emperor Antoninus Pius ordered the construction of new walls. 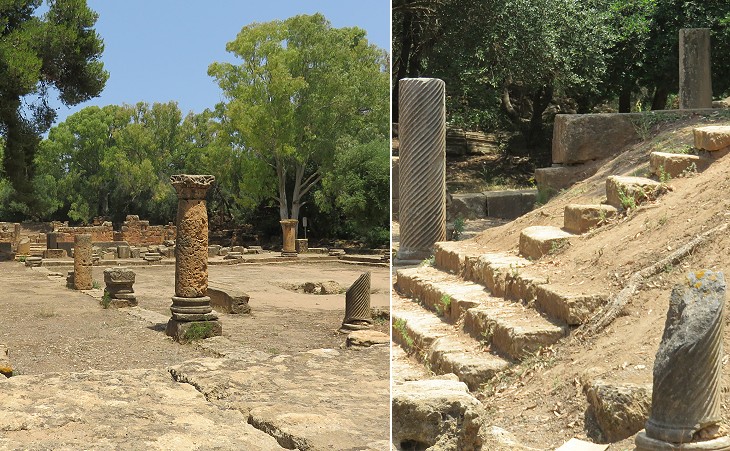 The "New" temple stands opposite the "Anonymous" one and it is so named because it was built after the latter. As a matter of fact archaeologists have not been able to identify the deities which were worshipped in these two temples. They do not stand in the Forum, thus they are unlikely to have been a Capitolium dedicated to Jupiter, Juno and Minerva (as at Thugga or Thuburbo Majus) or to be otherwise connected with Rome or the Emperors. Their location along the road which crossed the town suggests that perhaps they were temples to Hercules or Mercury, two gods who were highly popular among tradesmen (see the Temple to Hercules in Rome and the Temple to Mercury at Mactaris). 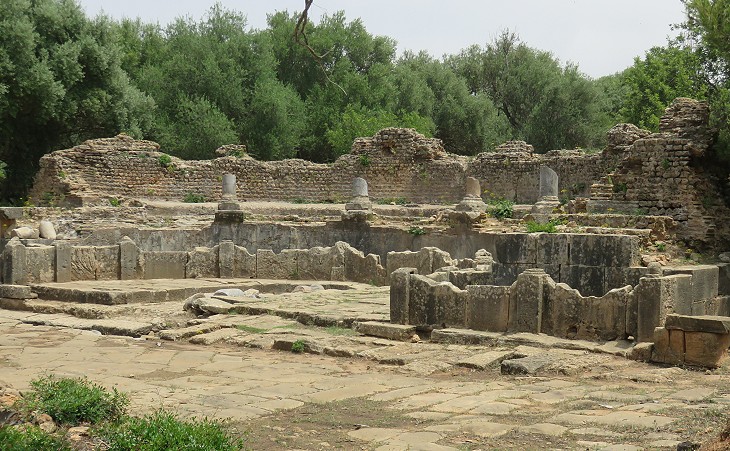 Nymphaeum; you may wish to see the Antonine Nymphaeum at Sagalassos

When the municipal magistrates wished to leave some souvenir of their administration, they often erected fountains, and some of these, the ruins of which remain, must have been elegant monuments, combining beauty with utility. There is one found at Tipasa, near Shershell, which formed a sort of hemicycle or water-works with statues and columns of blue marble. The water flowed from above into small superposed basins in such a way as to fall from one into the other and give out that gentle trickle that was so restful and refreshing during the hot hours of the day. Boissier
The IInd and IIIrd century AD were a period of great prosperity for Tipasa, when it probably had a population of about 20,000 inhabitants. The surrounding countryside was carefully cultivated, and remains of Roman villas and farms have been found in many directions. Tipasa did not have particularly imposing monuments, but it had all the public facilities, including an aqueduct, of a flourishing Roman town. Still farther to the S.W. are the ruins of a theatre in a very bad state of preservation. It was small and could hardly have contained more than 2,000 spectators. Murray 1895 Edition.
Ancient theatres have often suffered more from tourist development authorities than from the injuries of time, so it is better to find out that the theatre of Tipasa is approximately as it was in 1895, than to see it covered by brand new concrete facilities as at Carthage or Caesarea Maritima. Its current appearance, similar to that of the theatre of Euromos, is very evocative and it brings to mind some monuments of Angkor in the Cambodian jungle. 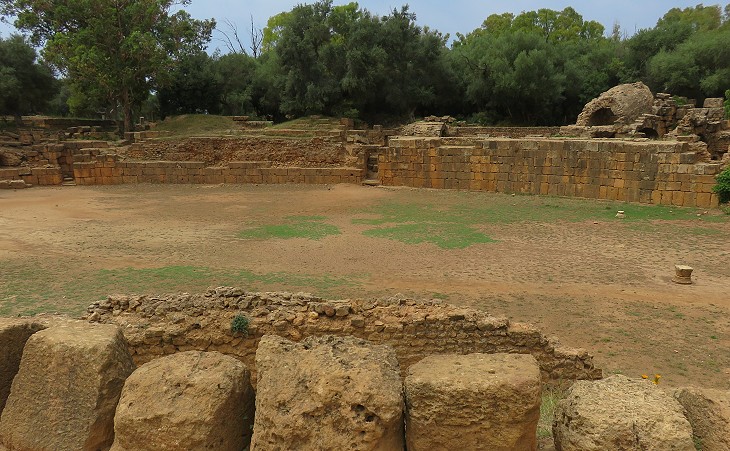 The Amphitheatre can only be traced; its major axis was about 95 metres in length. Murray 1895
The northern side of the building was excavated and parts of the walls which supported the seating section are now visible. It had two main entrances and three minor ones and it was located in a very central position near Decumanus Maximus. 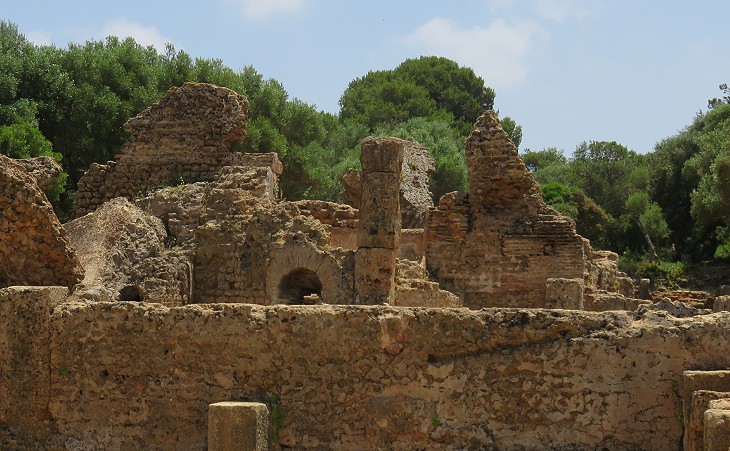 Walls of Baths near Cardo Maximus, not far from the sea

The Baths were in the centre of the city; but they are so deeply buried in earth as to be hardly visible. Murray 1895.
Archaeologists have found evidence of four bath establishments. Unfortunately they had been deprived of the marbles and works of art which most likely decorated them. 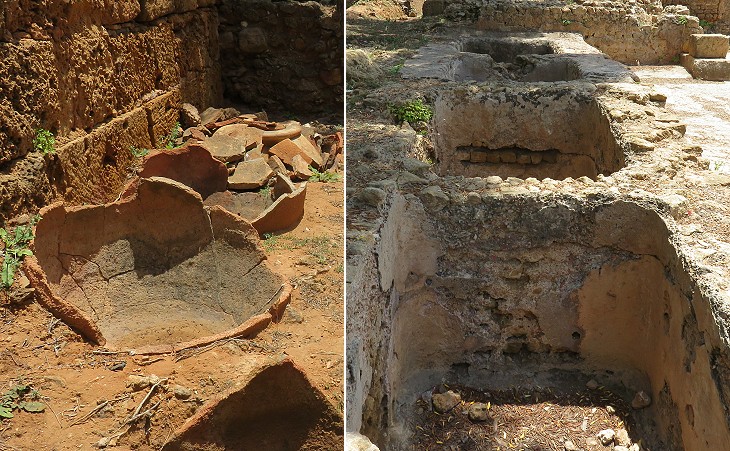 A garum factory was identified near the baths. Garum was a sauce made up of small fish and intestines of large ones which were macerated with herbs. It was very popular in Rome and it was one of the main exports of the African and Iberian provinces. The better preserved remains of a garum factory can be seen at Neapolis. 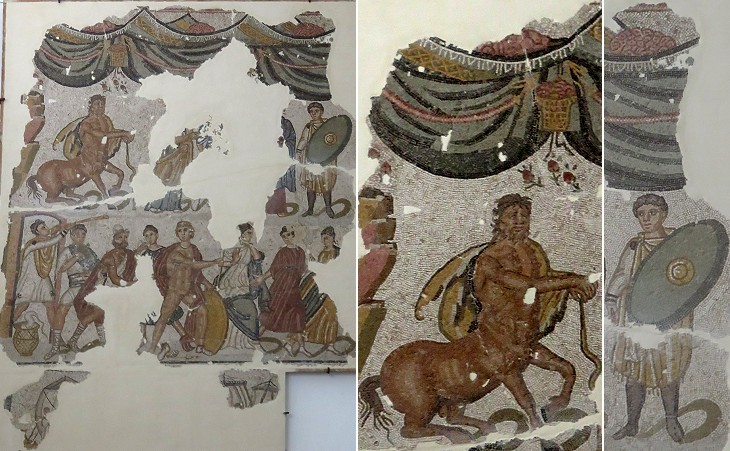 In 1936 a fragment of a fine floor mosaic was discovered in the proximity of the garum factory. It was not possible to ascertain to which building it belonged and to avoid further damage it was almost immediately detached and restored. It shows two scenes from the early life of Achilles, but most likely the whole floor mosaic included other scenes showing events of the War of Troy. The upper "strip" perhaps showed Thetys, the mother of Achilles with other women at the centre of the scene between Chiron, the centaur to whom the education of Achilles was entrusted (you may wish to see an interesting sarcophagus portraying Achilles in the arms of Chiron), and Patroclus, Achilles' best friend. 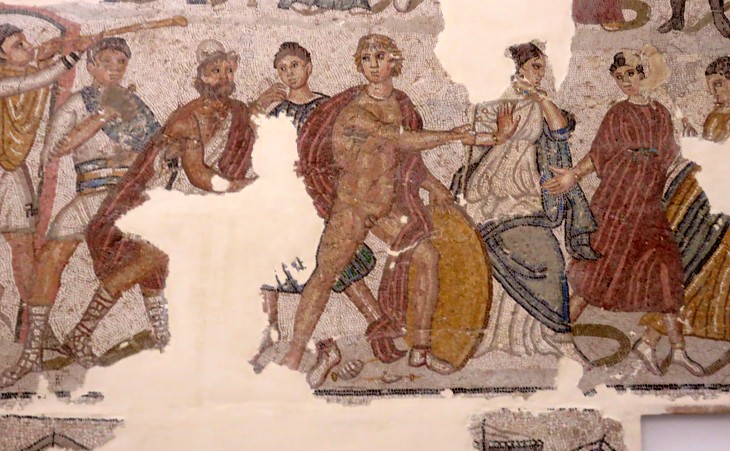 Detail showing Odysseus/Ulysses (with the "pileus", a felt cap) and Achilles (naked)

Thetys knew that her son would never return from Troy if he joined the expedition. (..) She disguised him as a girl, and entrusted him to Lycomedes, king of Scyros (..) Odysseus, Nestor, and Ajax were sent to fetch Achilles from Scyros, where he was rumoured to be hidden, Lycomedes let them search the palace, and they might never have detected Achilles, had not Odysseus laid a pile of gifts - for the most part jewels, girdles, embroidered dresses and such - in the hall, and asked the court-ladies to take their choice. Then Odysseus ordered a sudden trumpet-blast and clash of arms to sound outside the palace and, sure enough, one of the girls stripped herself to the waist and seized the shield and spear which he had included among the gifts. It was Achilles, who now promised to lead his Myrmidons to Troy. (Robert Graves - The Greek Myths).
The subject of this scene was popular throughout the whole Roman Empire from the River Rhine (Cologne) to the Euphrates (Zeugma). Ulysses was often portrayed wearing a pileus in mosaics, as at Thugga, and in statues as at Villa di Tiberio at Sperlonga.

Continue your visit of Tipasa by seeing the Central Hill and the Christian neighbourhood.