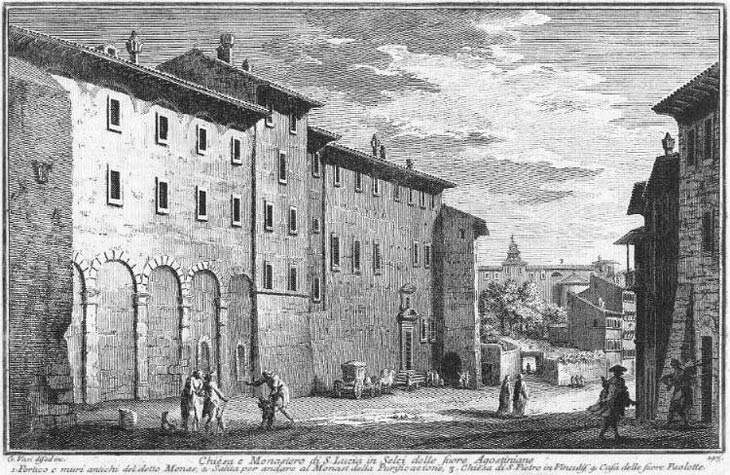 In 1587 Pope Sixtus V built the first modern aqueduct of Rome (Acqua Felice) to provide the Quirinal, Viminal and Esquiline hills with an adequate supply of water. Yet the three hills which made up Rione Monti did not see a major urban development; they remained rather unpopulated and continued to be characterized by the presence of villas and monasteries. In this plate which shows the Fagutal, the southern peak of the Esquiline, Vasi made reference to four monasteries/nunneries.
The view is taken from the green dot in the 1748 map below. In the description below the plate Vasi indicated: 1) Ancient walls of S. Lucia in Selci; 2) Street leading to Monastero della Purificazione; 3) S. Pietro in Vinculis; 4) Casa delle Suore Paolotte. 3) is shown in another page. The map shows also 5) SS. Gioacchino e Anna. 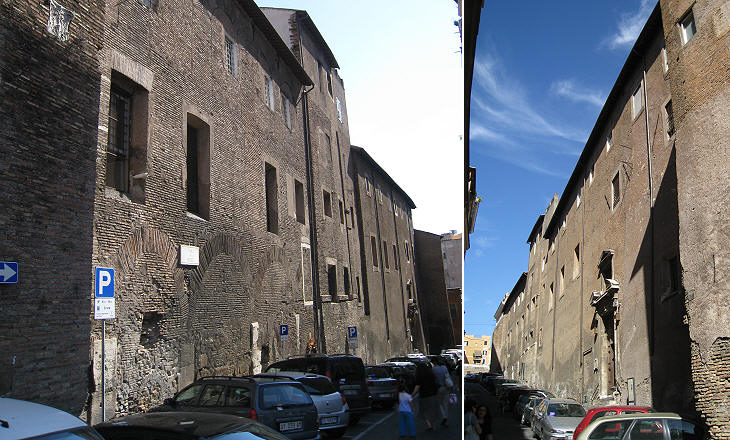 The view in June 2009: downhill (left) and uphill (right); the walled Roman capital which can be seen in the upper left corner of the first photo is shown in the image used as background for this page

Via in Selci and the severe looks of the nunnery make up one of the most interesting medieval sites of Rome; this because a large parallel modern street takes care of the traffic, but unfortunately cars are allowed to park alongside the old walls. 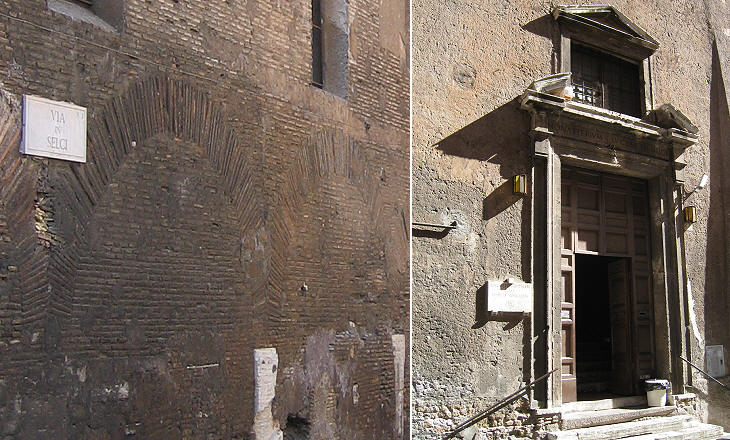 (left) Closed arches of the ancient Roman building; (right) entrance to the monastery

The nunnery was built on the site of Porticus Liviae, a square surrounded by porticoes built by Emperor Augustus in 7 BC in honour of Livia, his third wife. The reference to in Selci most likely indicates that the street was paved with selci, large stones which could have been part of the ancient portico.
The closed arches near the entrance to the nunnery are part of a later building of the IVth or Vth century which has not been identified with certainty: at a slightly later time the building became a diaconia, a Christian institution caring for the poor and the sick.
In the XIIIth century it was enlarged to house a Benedictine monastery and in 1568 it was assigned to Augustinian nuns. 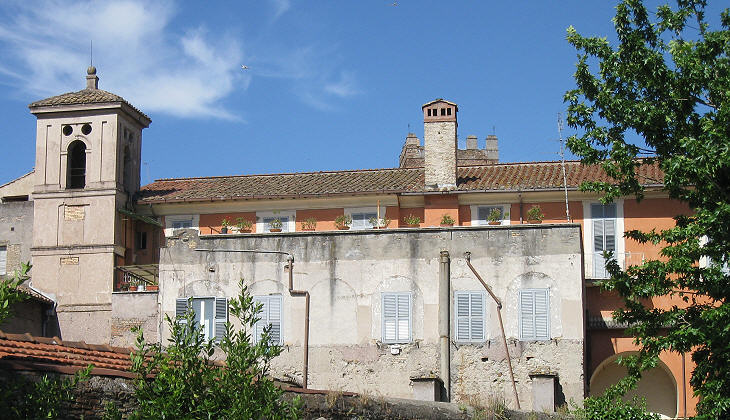 The nunnery seen from S. Maria della Purificazione and behind it the very top of Torre dei Capocci

During the first half of the XVIIth century the nunnery was enlarged and its interior was redesigned by some of the leading architects of the time (Carlo Maderno and Francesco Borromini). It is still a nunnery and notwithstanding the medieval appearance of its exterior it is a quite comfortable place in which to live. 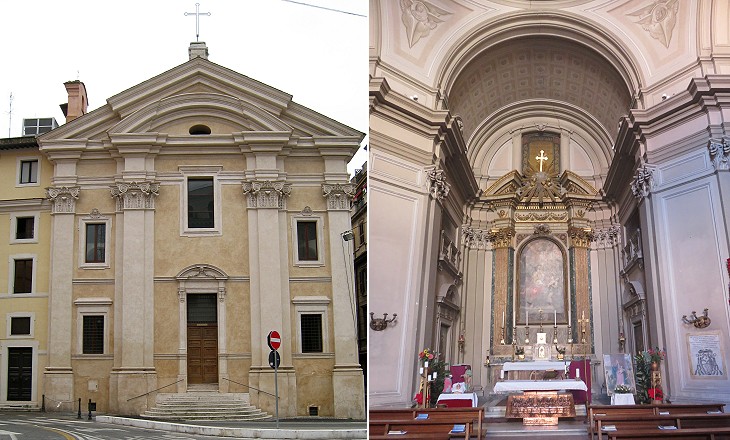 (left) Façade (today's level of the street is lower than it was in 1778); (right) interior

The plate shows (at the far right) Casa delle Suore Paolotte which housed nuns belonging to the order founded in 1453 by St. Francis of Paola (a church dedicated to this saint is not far away). When Vasi published this book in 1758 the nunnery was in the process of being completed and in 1770-1778 a church dedicated to Sts. Joachim and Anne was added to the complex.

In July, 1793, behind the choir of the nuns of S. Francesco di Paola (..) a room of a private Roman house was discovered, and in a corner of it a magnificent silver service, which had once belonged to Projecta, wife of Turcius Asterius Secundus, who was prefect of the city in 362 A. D. (..) The objects were of pure silver, heavily gilded, and weighed one thousand and twenty-nine ounces. Besides plates and saucers, forks and spoons, candelabras of various sizes and shapes, there was a wedding-casket with bas-reliefs representing the bride and groom crowned with wreaths of myrtle; she, with braids of hair encircling her head many times, in the fashion of the age of the empress Helena; he, with the beard cut square, in the style worn by Julian the apostate, and Eugenius. The reliefs of the body of the casket represented love-scenes, Venus and the Nereids, the Muses and other pagan subjects; and just under them was engraved the salutation: "Secundus and Proiecta, may you live in Christ." The casket was filled with toilet articles and jewels.
Rodolfo Lanciani - Pagan and Christian Rome - 1892
During the construction of the church a small treasure of silver and gold artefacts was found: they were part of the dowry of Projecta, a Christian bride of the late IVth century; it is generally referred to as the Esquiline Treasure: a finely chiselled casket is very interesting because its decoration is based on both Christian and pagan themes. You may wish to see a IVth century ivory casket at Brescia. 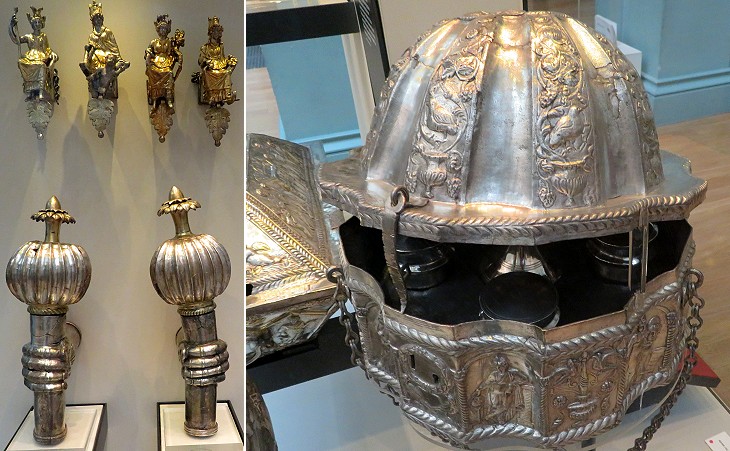 British Museum: other elements of the Esquiline Treasure 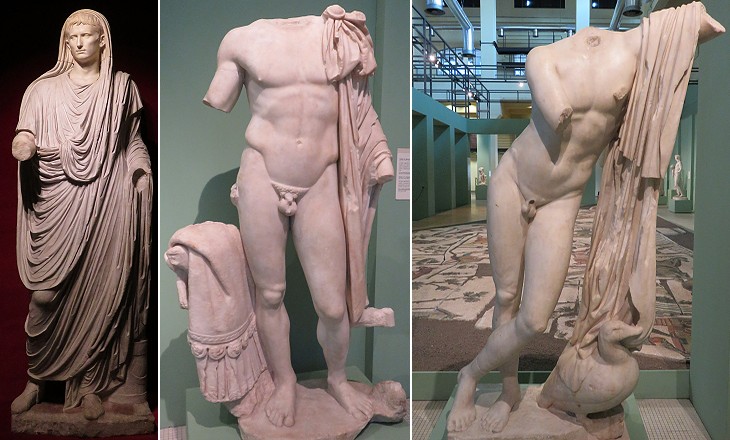 The statue of Augustus was discovered in 1910 not far from S. Lucia in Selci; it most likely stood in Porticus Liviae. The emperor is portrayed as an aged man and while performing a religious ceremony in his capacity as Pontifex Maximus (High Priest). In many official portraits (e.g. in the statue found at Prima Porta) Augustus chose to be depicted as a military leader. In his last years he preferred to be represented as a pious man. Ara Pacis Augustae, the altar built in 13 BC to celebrate the peace in the whole Empire, was decorated with a relief showing a religious procession, rather than with military trophies.
In 1940 excavations carried out near SS. Gioaccino ed Anna unearthed a IInd century AD domus (typical Roman house of the upper classes) where some fine statues were found. That of Pothos is a copy of a lost statue by Skopas (IVth century BC). Pothos was one of the sons of Aphrodite and he symbolized the loving desire towards a distant person. 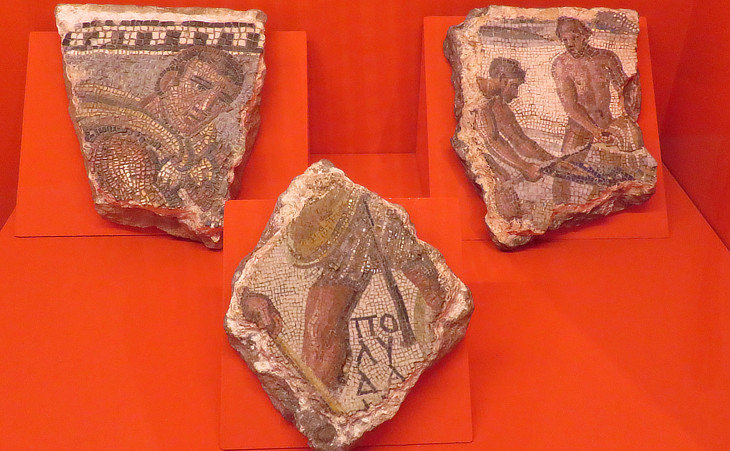