A mill/bakery north of Decumanus Maximus was excavated in 1913-1916 and it soon became a "must see" for visitors of the ancient town (and it still is). In 1938-1942 a larger mill/bakery was found between Semita dei Cippi and the southernmost section of Cardo Maximus, the main north-south street. It was accessed from both streets where it had a total of eight shops. Large stone grinders in good condition were found inside a very large hall in the northern part of the establishment. Its buildings are dated early IInd century AD, but repairs/modifications were made in the following centuries until perhaps 440.
Grinders were activated by donkeys, but archaeologists did not identify their stable inside the building. It might have been situated somewhere on the other side of Semita dei Cippi. 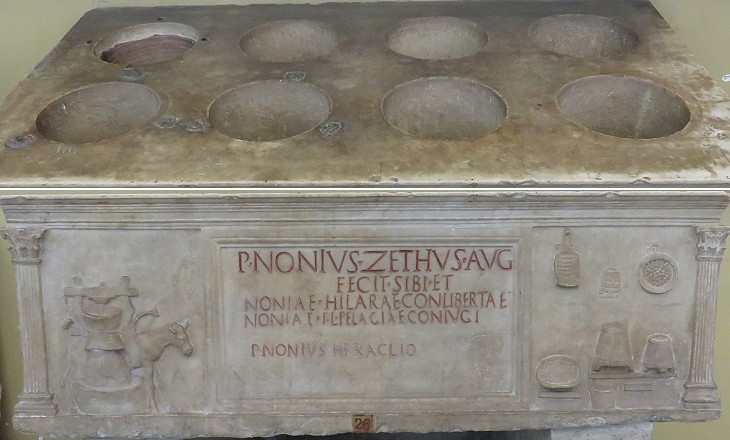 In addition to the archaeological evidence we can understand the activities which went on in a Roman mill/bakery from reliefs in funerary monuments of millers, who were very proud of their trade. The tomb of Marcus Virgilius Eurysaces near Porta Maggiore is perhaps the best known example of such a monument. The inscriptions on the ollario of Publius Nonius Zethus were poorly written, but the reliefs were finely executed and provide a good understanding of the miller's activity. 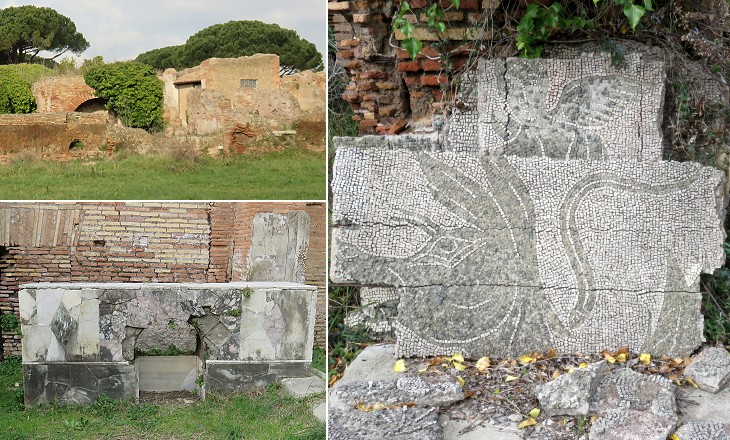 Terme del Faro (lighthouse): (left-above) view from the south; (left-below) "bar counter" of a tavern inside the baths; (right) detached floor mosaics with marine subjects which included a depiction of the lighthouse of Porto, after which the baths are named

Travellers who entered Ostia at Porta Laurentina initially found a series of temples and other religious buildings, but as soon as they entered Cardo Maximus they felt they were in a more lively setting. A rather large bath establishment stood opposite the shops of the mill/bakery. It is dated early IInd century AD, a period during which many parts of Ostia were redesigned, mainly at the initiative of Emperors Trajan and Hadrian. 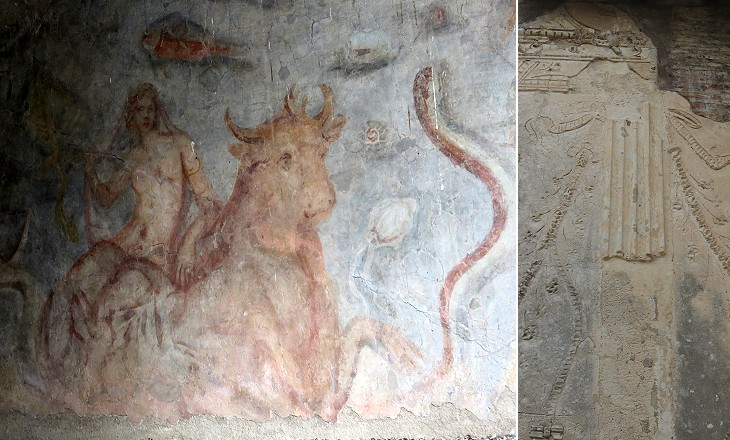 The baths were owned by members of the Roman senatorial class and they were refurbished at the end of the IInd century and at the beginning of the following one. We know that only a nominal fee was required to access the large establishments of Rome (e.g. Caracalla's Baths), but perhaps this was not the case at Terme del Faro. The luxury of their decoration suggests they were reserved to a wealthy clientele. Unfortunately they are not regarded as a main monument and their maintenance is poor.
* Zeus fell in love with Europa, a beautiful girl who lived in Phoenician Tyre; she used to walk by the seashore and there he met Zeus disguised as a snow-white bull with great dewlaps and small gem-like horns. Europa was struck by his beauty and began to play with him; eventually she climbed on his shoulders. Suddenly he swam away with her. Abridged excerpt from Robert Graves - The Greek Myths - 1955 - Collins.
You may wish to see floor mosaics depicting the Rape of Europa in Algeria and at Lullingstone, south of London. 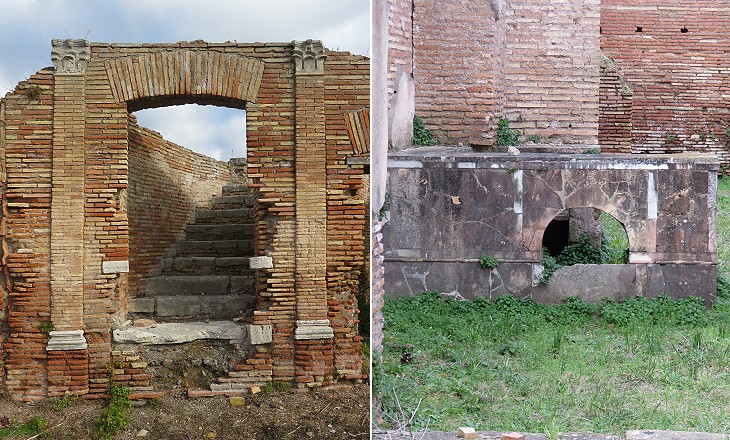 Caseggiato (city block) dell'Ercole: (left) entrance leading to an apartment on the upper storey; (right) "bar counter" of a tavern along Cardo Maximus

Most of the buildings of Ostia were the outcome of large real estate investments. Caseggiato dell'Ercole (thus named after a small relief portraying the hero) was made up of a series of buildings around an inner courtyard. That on Cardo Maximus had a line of shops and a long portico which sheltered prospective customers from rain. Apartments on the upper storey had direct access to the street. The whole façade had a brick and marble decoration. 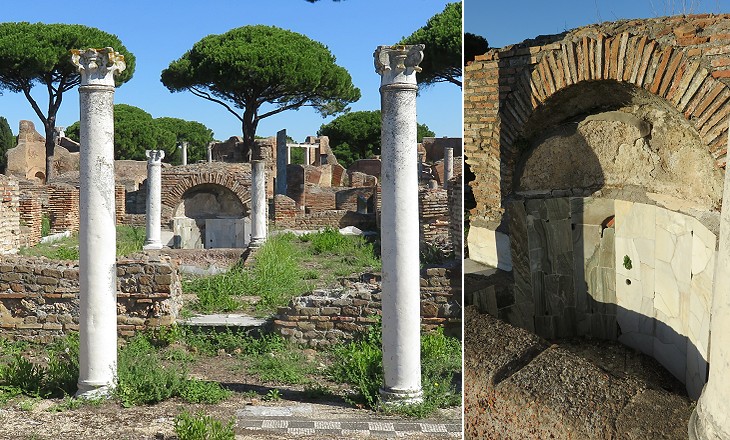 Domus delle Colonne: (left) courtyard (in the distance one can see the southern halls of Terme del Foro); (right) marble decoration of its fountain

Occasionally archaeologists ran out of inspiration in naming the buildings, because there is hardly a house without columns in the archaeological area.
The land along Cardo Maximus was highly priced and so a domus, an individual house belonging to a wealthy family, would normally be accessed from a side street. Domus delle Colonne had the privilege of having an entrance from Cardo Maximus between two shops. It had a very large inner courtyard with a fountain at its centre.
It is dated early IIIrd century AD, but the presence of a well in the courtyard indicates it was inhabited until the Vth or VIth century. 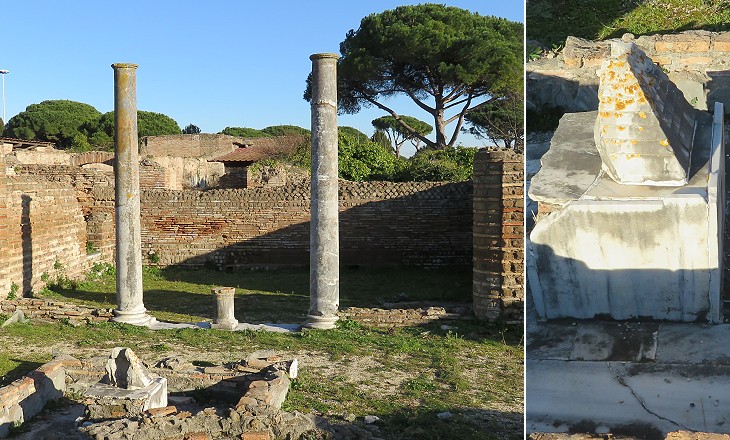 This house was built behind Domus delle Colonne in the second half of the IIIrd century and its layout departs from the one we are used to seeing in a Roman domus. The largest hall of the house where the landlord received his guests could only be accessed from the courtyard. Guests would have noticed a tiny marble fountain where water flowed down the surface of a pyramid, a typical feature of Roman fountains (e.g. Meta Sudante). 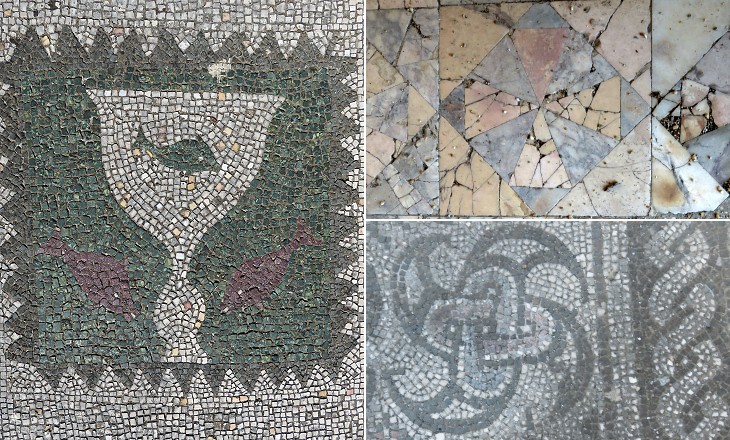 Archaeologists have carefully looked for evidence of Christian Ostia, but without achieving much. Some of them believe an elegant mosaic in the vestibule of Domus dei Pesci indicated that the landlords were Christians. Other archaeologists argue that the fish are only elements of an elaborate decoration, not necessarily referrable to early Christian landlords. As a matter of fact a single stylized fish would have been a more likely indication of Christian presence, because the five letters of the Greek word for fish were the acronym of "Jesus Christ, Son of God, Saviour". 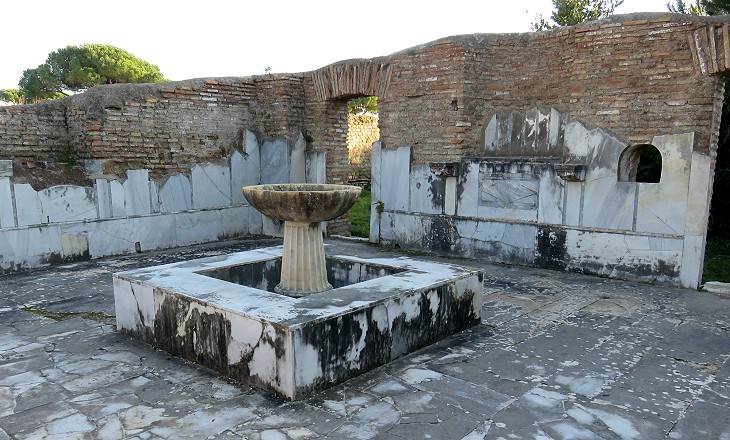 The western side of the last section of Cardo Maximus before it enters the Forum is characterized by a series of small buildings which all have rewarded the archaeologists' work.
A nymphaeum is usually a public monumental fountain. The term can hardly be applied to a small hall entirely faced with white marble having a relatively narrow entrance from Cardo Maximus, but perhaps the archaeologists initially believed they had discovered a larger building.
The fact that two statues of Eros were found in the side niches has been taken as evidence that the hall was the vestibule of a luxury brothel, but this opinion is not widely supported (although it would make the hall a "must see" of the archaeological site). The building was one of the last additions to ancient Ostia. 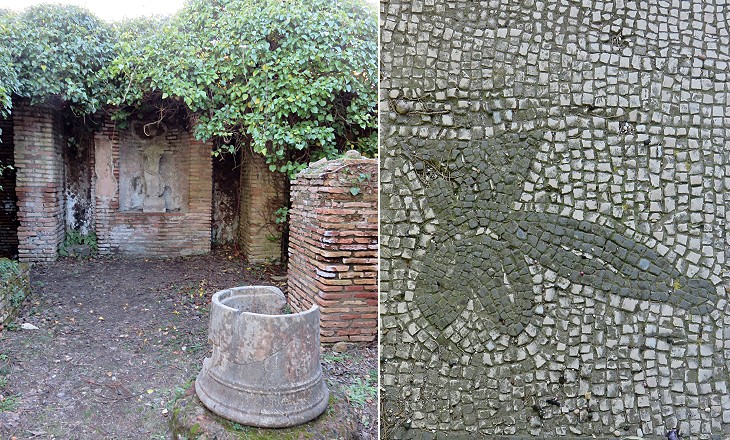 An unscrupulous cicerone may support the opinion that Ninfeo degli Eroti was part of a brothel by showing a floor mosaic in a nearby small building. The depiction of a phallus had usually an apotropaic purpose i.e. to avert evil influences and only when associated with other evidence it indicates the existence of a brothel (see remarks on the brothels of Delos and the phalli of Pompeii).
The house with the phallus is named after a Greek inscription to Zeus descending in thunder and lightning, the adjoining one after a niche decorated with (barely visible) coloured mosaics. 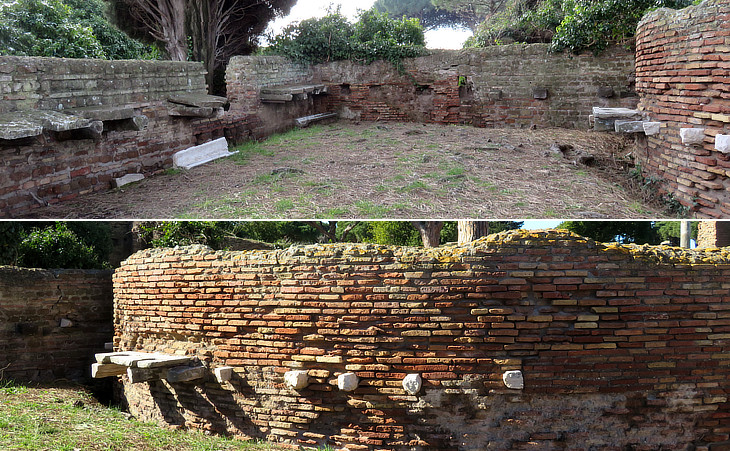 Two large latrines were situated in the area of Terme del Foro on the eastern side of Cardo Maximus. A third one was added in the fourth century in the western side of the street. The large number of public latrines found at Ostia might be explained by the fact that the town housed many fullonica (fulling workshops) where fermented urine was used for cleaning and dyeing clothes (because of its ammonia content). Actually a fullonica was installed very near these latrines in the IIIrd or IVth century. Men using the latrines might have been asked to urinate in small dolia, earthenware vessels.
Emperor Vespasian levied a tax on urine collection and trade.
When Titus found fault with him for contriving a tax upon public conveniences, he held a piece of money from the first payment to his son's nose, asking whether its odour was offensive to him. When Titus said "No," he replied, "Yet it comes from urine" (hence the saying money does not stink).
Suetonius - Life of Vespasian - Loeb translation 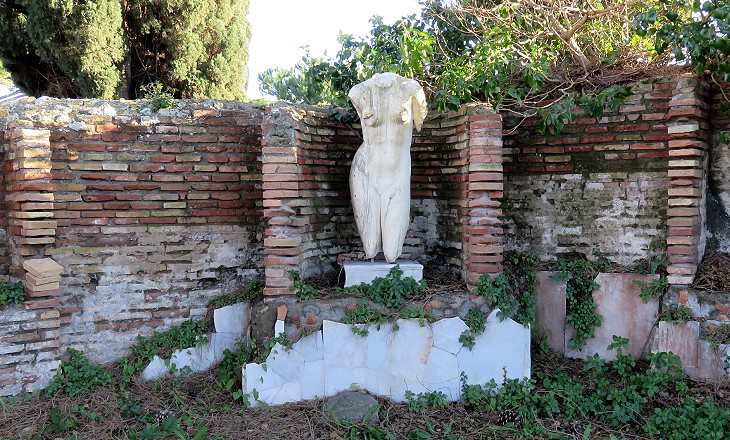 Nymphaeum at the junction between the Forum and Cardo Maximus

The latrine shown earlier in this page made use of the round wall of a large nymphaeum which was part of the Forum. It was built at the time of Emperor Trajan and it was preceded by a large square basin. The cast of a naked Venus found elsewhere has been placed in the central niche, but we do not know which statues actually decorated the nymphaeum.
The image used as background for this page shows a grinder at Casa dei Molini.