Semita dei Cippi is a street in the southern part of the archaeological area with a number of interesting buildings, including a large mill/bakery having its main entrance on Cardo Maximus, which runs almost parallel to Semita dei Cippi. 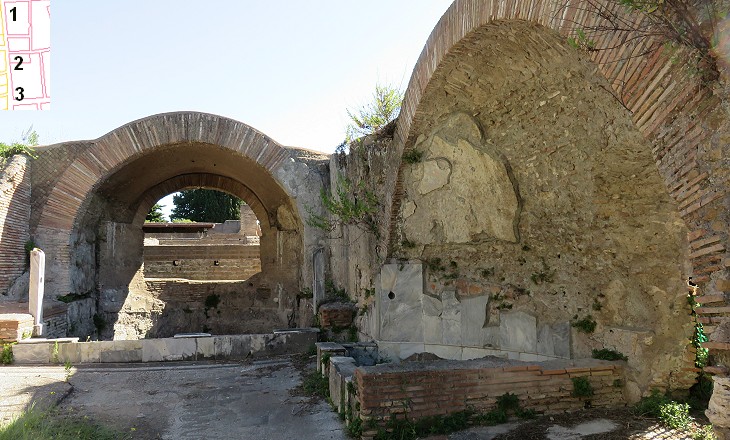 Ist century AD philosopher Seneca described what was going on in a small bathing establishment near his home in a letter to a friend. Rome retains the ruins of some very large baths (e.g. those of Caracalla and of Diocletian), but not of the type described by Seneca. At Ostia, in addition to some large baths, one can visit a number of small establishments which catered for a local clientele.
Terme dell'Invidioso were initially built in the Ist century AD, but were modified at the time of Emperor Antoninus Pius and again in the early IIIrd century. They had all the customary facilities of Roman baths: apodyterium (dressing room), palaestra for exercising, tepidaria (warm rooms) and calidaria (hot rooms) and the frigidarium, but their size indicates that the establishment could accommodate some 100 bathers at the maximum. 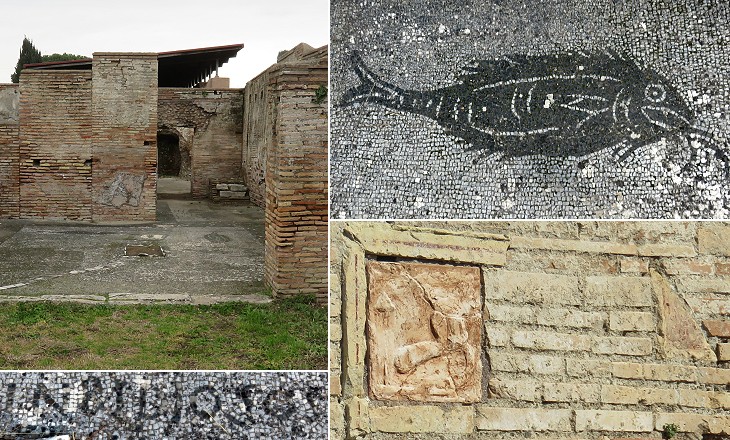 Terme dell'Invidioso: (left and right-above) shop (perhaps a fishmonger) adjoining the baths with details of its floor mosaics with the inscription "inbidiosus" and a fish; (right-below) terracotta relief (upside down) on the external southern wall of the baths

Because of the lack of inscriptions stating the owners or the founders of the many baths found at Ostia, archaeologists have named them after a detail which caught their attention. The word inbidiosus (envious) written on a floor was seen as a perfect means to uniquely identify these baths. A similar reference to envy was found at Taverne dei Pescivendoli, another fishmonger in the western part of the town. The adjoining marine subjects on the floor do not provide a clue for the word, but some of them are lost. It could have had an apotropaic purpose i.e. to avert evil influences, similar to that of a terracotta phallus outside the establishment. The neighbourhoods to the north of Decumanus Maximus were more densely populated than those to the south of Ostia's main street where a number of domus have been identified. domus is the Latin word indicating a detached house belonging to a wealthy person, which had lodgings for some servants and their families.
Domus della Fortuna Annonaria was named after a statue portraying a goddess. Annona indicated the grain-supply to the City of Rome and Fortuna Annonaria, its protective deity, was usually depicted holding a cornucopia, symbol of abundance. It could be that the landlord who placed the statue was involved as a merchant, a shipowner or a magistrate in the supply chain. You may wish to see a sarcophagus in Rome which portrays allegorical characters involved in the annona process. 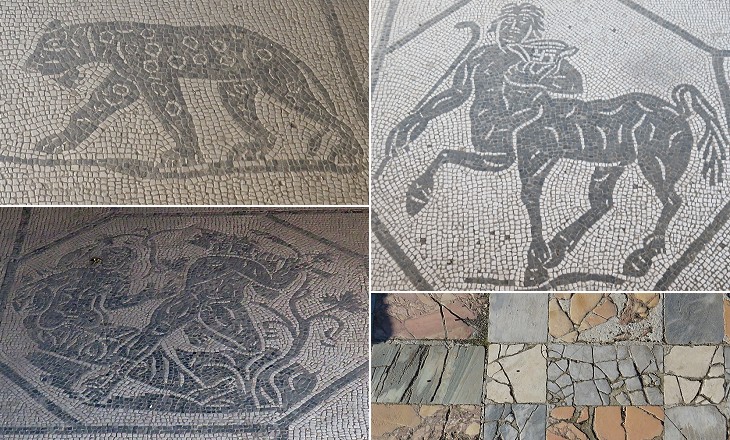 A room decorated with black and white mosaic floors was heated by a small furnace in an adjoining room through terracotta pipes placed inside the wall. It could have been the reception hall used in winter. Its floor mosaic included the depiction of the she-wolf suckling Romulus and Remus which you can see in the image used as background for this page. Other details of the floor mosaic showed some of the Labours of Theseus including the hero's killing of Sinis, a robber so strong that he would bend down the tops of two neighbouring trees until they met, and tie one of his victim's arms to each, so that he was torn asunder when the trees were released. (Robert Graves - The Greek Myths - 1955) 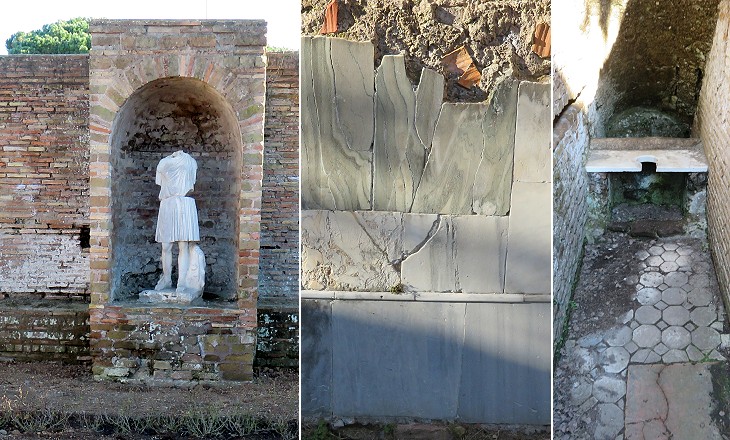 Domus della Fortuna Annonaria: (left) niche in the courtyard with a statue of Diana; (centre) marble decoration of the walls; (right) latrine

The house is the result of a series of additions/modifications which were made until the IVth century AD. Some of its marbles and statues might have come from dismantled buildings. The presence of a well in the courtyard could indicate that the house was still used after the aqueduct which supplied Ostia with water had been damaged in the Vth or VIth century. 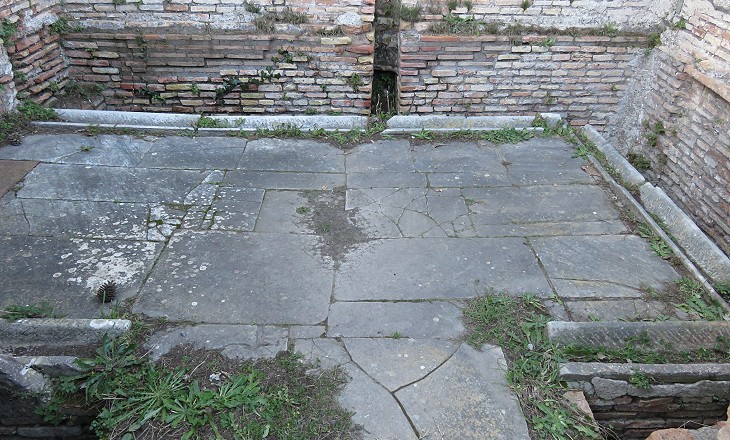 Terme del Filosofo along Semita dei Cippi were named after Plotinus, a IIIrd century AD philosopher of whom two busts were found in the building, most likely in a section which was not part of the bath establishment. The latter was opened in the IIIrd century in a unit of the insula (block) which had been used for other purposes. The large latrine shown above had direct access from the street and it might have existed before the baths were built (of these only some bare walls remain). 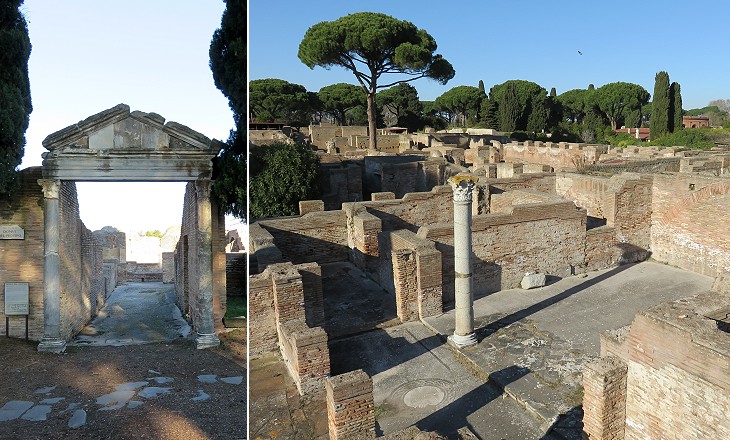 This domus is one of the largest and best designed houses found at Ostia. Its main entrance was decorated with a porch which gave access to a long corridor leading to the courtyard. It is dated IIIrd century AD. There was an inscription on the porch but only the letters "NGENTI" are readable. They could be part of the name of the landlord or of the word ingenti, which the Romans often associated with pecunia to say "a lot of money". 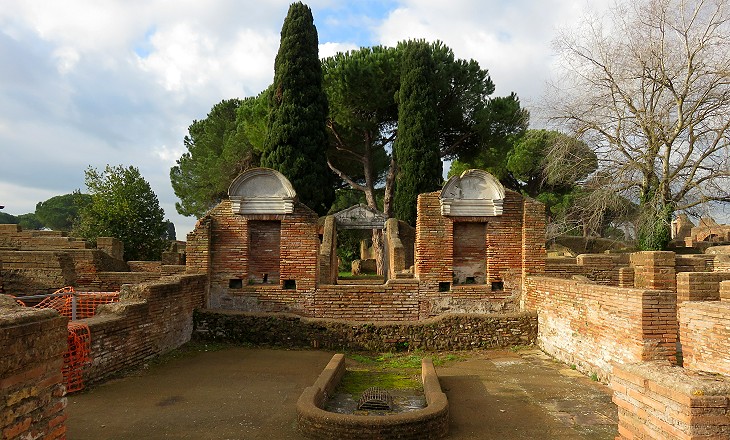 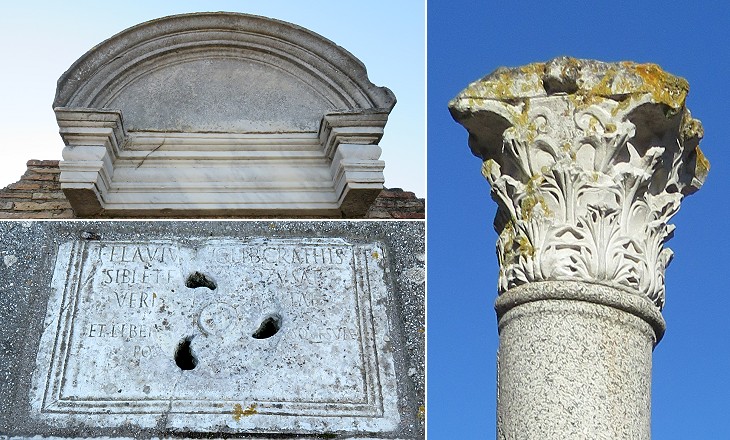 The curved tympana above the two niches of the courtyard are very interesting as they depart from the traditional triangular tympana of classical architecture. This liking for round rather than triangular shapes began during the reign of Emperor Hadrian (see an example at Villa Adriana). In the design of Palazzo Farnese the windows were decorated with curved and triangular tympana alternatively and this pattern was adopted in many Renaissance-type buildings of the XIXth century. 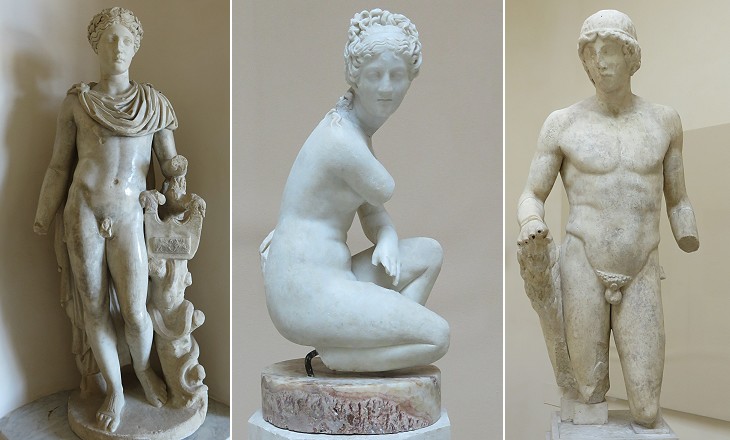