The sanctuary of S. Maria della Querce is named after an image of the Virgin Mary which in 1417 a peasant placed between the branches of an oak (It. quercia or querce) on his farm; the sacred image was visible from the road which linked Viterbo to Bagnaia and it soon became the object of popular devotion.
In summer 1467 the inhabitants of Viterbo made a short pilgrimage to that farm to pray for the end of a pestilence, which actually ended a few weeks later; this event prompted the building of a small church to house the sacred image; a few years later the construction of an imposing sanctuary began.
S. Maria della Querce can easily be reached by foot from Viterbo in half an hour along a straight road which starts at the north-eastern corner of the walls and which retains interesting monuments of the past. 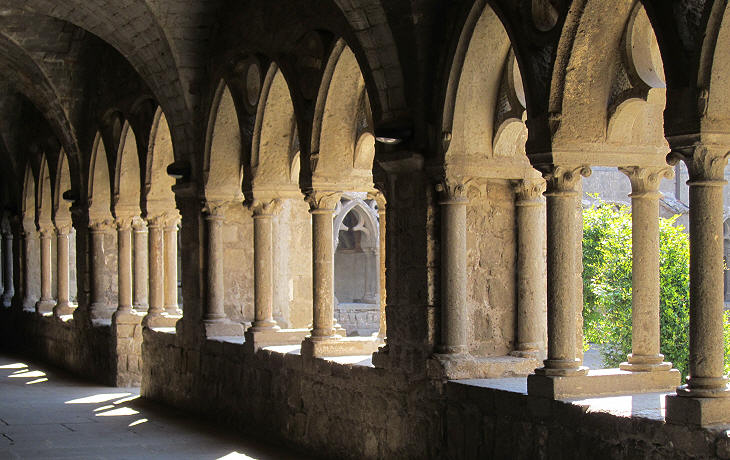 In the second half of the XIIIth century members of the Cistercian order built a monastery outside the eastern walls of Viterbo; the complex was later on assigned to the Franciscans; its church was modified several times and it was eventually greatly damaged by bombings in 1944. The cloister instead retains much of its original Gothic design and atmosphere. 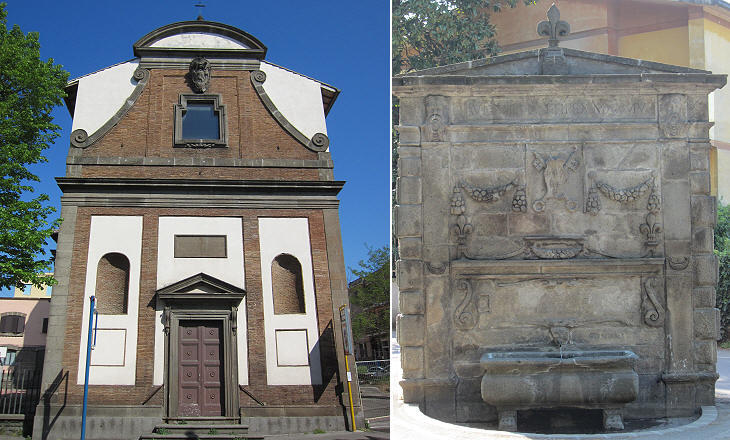 In The Innocents Abroad Mark Twain complained about the number of affixes needed to distinguish the many churches of Rome dedicated to the Virgin Mary; yet a dedication to Edera (ivy) is almost unique and cannot be found in Rome. A long inscription on the façade indicates that the church was built in 1589-1595 with the consent of Cardinal Mariano Pierbenedetti, a distant relative of Pope Paul III; as a matter of fact Cardinal Pierbenedetti was offered the dioceses of Viterbo, but he preferred to remain in Rome.
Pope Paul III had many links with Viterbo as his family, the Farnese, had their roots in that town; he built a fountain for pilgrims on their way to the sanctuary. 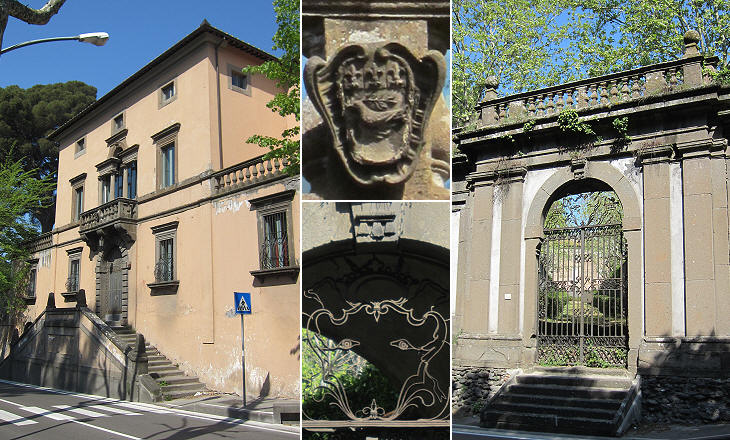 (left) Villa Pamphilj; (right) portal of Villa Bussi; (centre) coats of arms of the Pamphilj (above) and of the Bussi (below)

In the XVIIth century the most important families of Viterbo built villas along the road leading to the sanctuary: Donna Olimpia Maidalchini Pamphilj, sister-in-law of Pope Innocent X, owned the fiefdom S. Martino al Cimino, a few miles south of Viterbo.
The Bussi were an important family of Viterbo who relocated to Rome where they inherited the properties of the Muti, including the family palace in Piazza S. Maria in Aracoeli; the Bussi's coat of arms is rather unusual: two open eyes on a blue background. 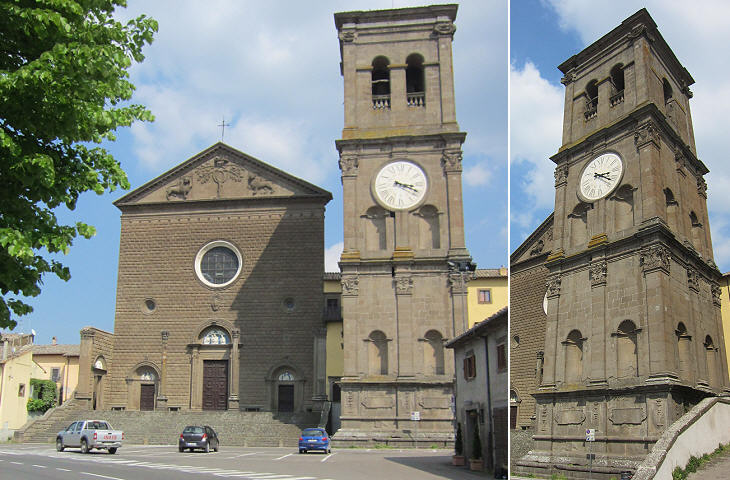 The sanctuary was built between 1470 and 1525, mainly at the initiative of Pope Sixtus IV (1471-84) and his nephew Pope Julius II (1503-13). Maybe their interest in the sanctuary was due to Della Rovere, their surname, which means "of the oak", because rovere is a species of oak (sessile oak); their coat of arms shows an oak with twined branches (in the background of this page you can see it in a relief at the beginning of the steps leading to the church). 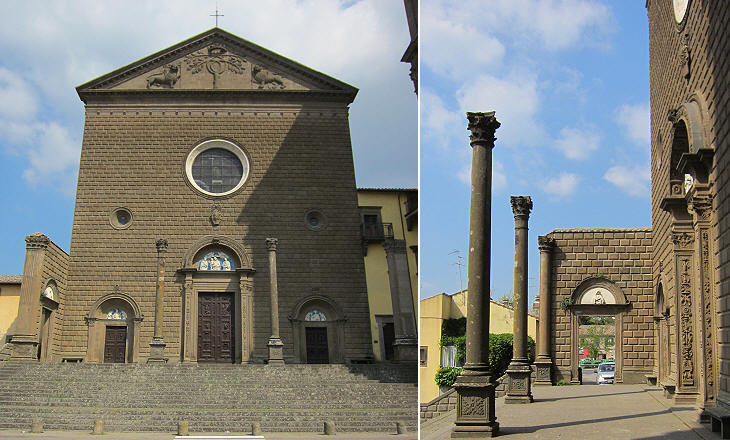 The front of the great church of La Madonna della Quercia, and its stately tower, are splendid works of Bramante (!).
Augustus J. C. Hare - Days near Rome - 1875
The neat façade of the church and the bell tower were designed by a series of capomastri (master builders) and sculptors who are not included among the greatest architects of the Italian Renaissance, yet they were surely familiar with their works. 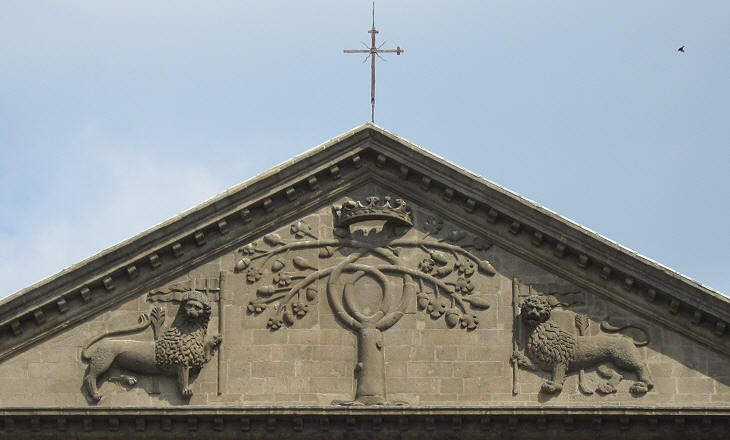 Façade: detail showing the symbols of Viterbo and of Pope Julius II

The large relief on the tympanum shows the Della Rovere oak between two lions representing Viterbo; it is one of the first examples of heraldic symbols which were used as a decorative motif; this practice was adopted by many popes to ensure their role in the construction of a building was not forgotten. 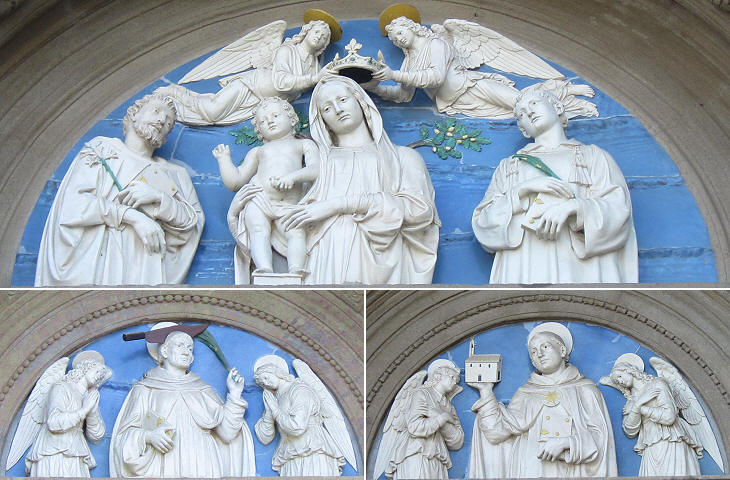 Glazed terracotta reliefs by Andrea della Robbia: (above) Madonna and Child and Sts. Dominic and Lawrence; (below - left) St. Peter of Verona (he was killed with a billhook); (below-right) St. Thomas Aquinas (being a great theologian he is often portrayed holding a model of church)

Over the central door is a fine representation of the Madonna surrounded by angels, and over the side doors S. Joseph and S. Stephen, S. Dominic and S. Peter Martyr, by Luca della Robbia. Hare
Luca della Robbia was a Florentine sculptor who developed a pottery glaze which made his terracotta sculptures more durable; his nephew Andrea improved the technique by adding the use of colour, mainly for small details, such as the palm leaves of the martyrs; the fame of his works was not limited to Tuscany and he was asked to decorate the three portals of S. Maria della Querce which are included among his masterpieces. You may wish to see other glazed terracottas at Bolsena, a town to the north of Viterbo. 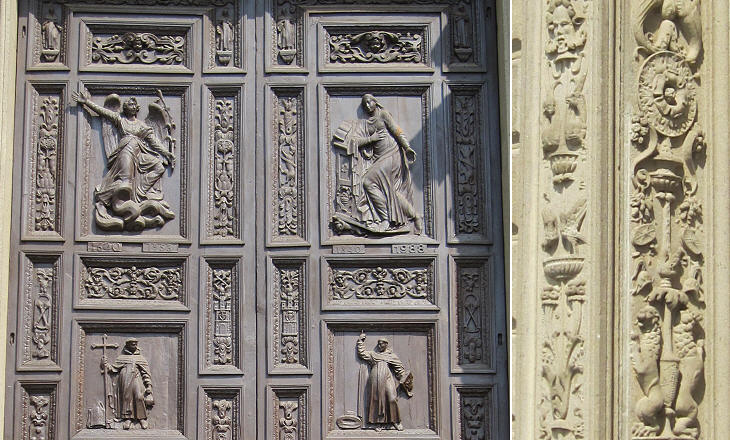 The sanctuary has always received generous donations which have allowed proper maintenance of the many works of art which decorate it; several popes, including Pope Clement VIII and Pope Paul V, granted special indulgences to those who visited it; a small village was built for the peasants who worked in the nearby properties acquired by the sanctuary. 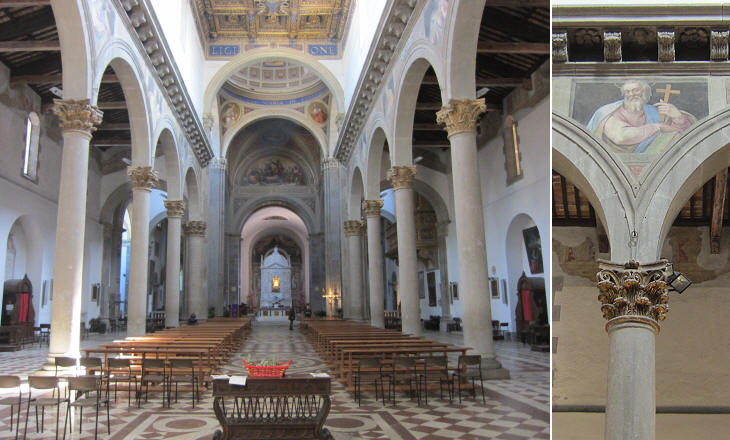 (left) Interior; (right) detail showing one of the paintings by Cesare Nebbia (1601)

The monks of the adjoining convent are devoted to education, and when we visited the church its vast aisles were peopled with large groups of children, which the friars in their white robes were teaching. Hare
The design of the interior is attributed to Giuliano da Sangallo, a Florentine architect who worked in Rome for Pope Julius II. 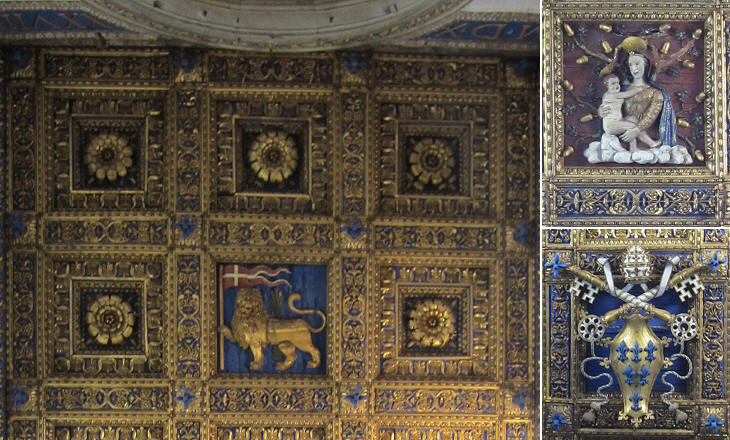 Ceiling with the coats of arms of: Viterbo, Madonna della Querce and Pope Paul III

The ceiling is gilt and very magnificent, like that of Santa Maria Maggiore. Hare
The ceiling was designed in 1519 by Antonio da Sangallo the Younger, nephew of Giuliano, but its gilded decoration was added in 1535 by Pope Paul III who used gold from the Americas which was donated to him by Emperor Charles V (see a page on church ceilings in Rome). 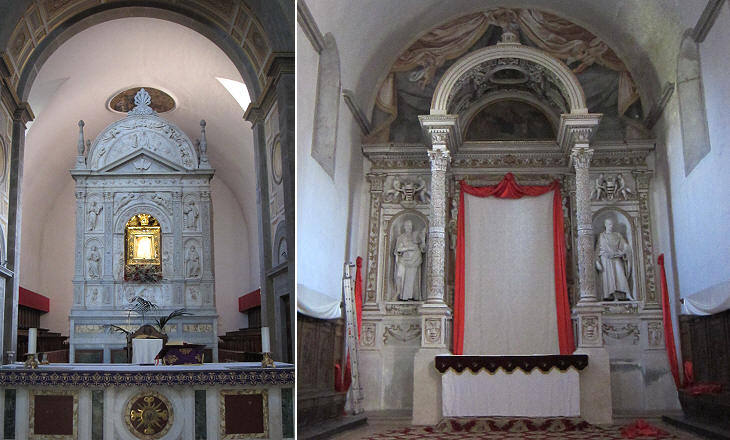 (left) Tabernacle by Andrea Bregno; (right) altar in the choir by Pompeo Alberti

Andrea Bregno was the major sculptor in Rome in the late XVth century; in particular he worked for the Della Rovere at S. Maria del Popolo; he concentrated on very low reliefs (It. stiacciato); in 1490 he was asked to create an elaborate tabernacle to house the sacred image.
The decoration of S. Maria della Querce continued throughout most of the XVIth century as the church was formally consecrated only in 1578. 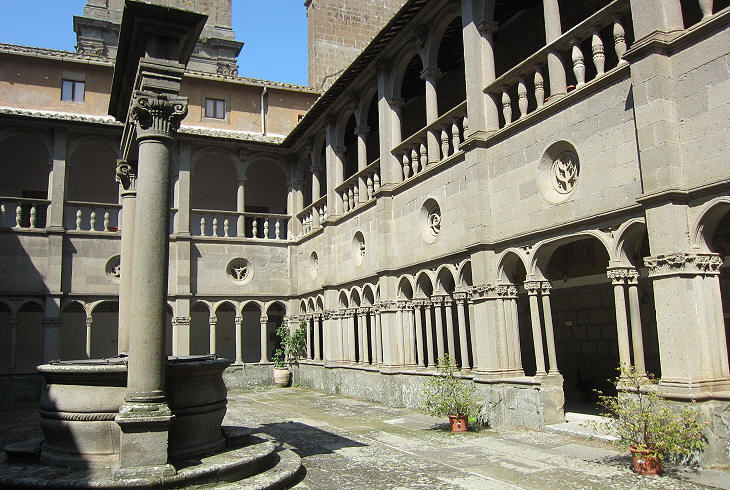 The construction of a large cloister was started in 1487; the design of its ground floor is still reminiscent of the strong Gothic tradition which existed in Viterbo, while the upper floor is in line with the Renaissance style of the complex. 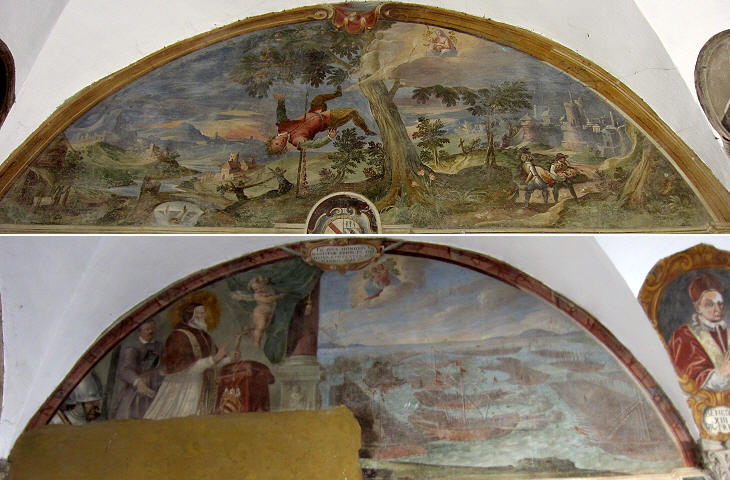 Frescoes in the first cloister showing miracles of Madonna della Querce: (above) a peasant who has fallen on his own pruner is saved; (below) Pope Pius V prays for the victory of the Christian fleet at Lepanto

In the XVIIth century the ceiling of the cloister was decorated with frescoes depicting miracles attributed to the sacred image; they usually portray events associated with the local environment (including pilgrims assaulted on their way to the sanctuary), but they also show that Pope Pius V had a special devotion for Madonna della Querce; he donated to the sanctuary a spar from an Ottoman ship captured at Lepanto. 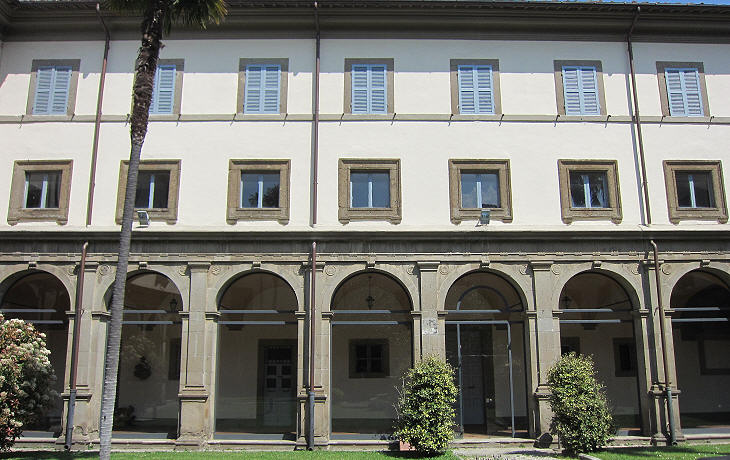 In the second half of the XVIth century a second cloister was completed probably based on an initial project by il Vignola which was reduced in size to lower its cost; it is now part of a cosy hotel which occupies part of the monastery. 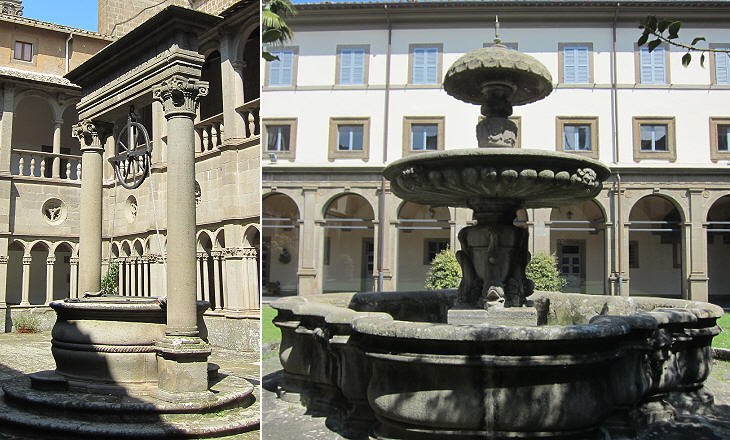 (left) Well in the first cloister; (right) fountain in the second cloister

The cloister of S. Pietro in Vincoli was designed by Giuliano da Sangallo for Pope Julius II; it has a well similar to that of the first cloister; it has also a fountain which was added when an aqueduct brought water to that part of Rome; at S. Maria della Querce the fountain was built in the second cloister in 1633, when probably the sanctuary was linked to the aqueduct which supplied Villa Lante di Bagnaia. 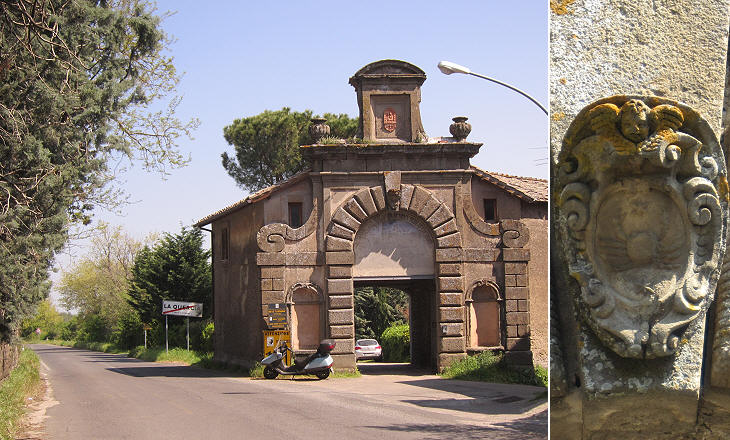 (left) Portal of a property built by Cardinal Gambara; (right) coat of arms of the cardinal (It. gambero means shrimp)

Cardinal Gian Francesco Gambara was bishop of Viterbo in 1566-1576; his name is associated with the construction of a new façade for S. Lorenzo, the cathedral of Viterbo, and of Villa Lante di Bagnaia; his coat of arms can be found on an imposing portal near the sanctuary; the property housed the local seminary until a few years ago.