S. Lorenzo in Panisperna
(Vasi at work in the Grand View of Rome) 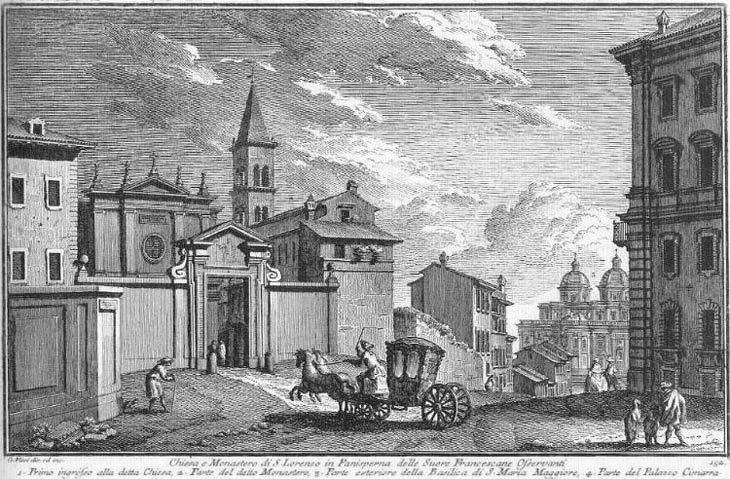 The Viminal Hill is the least known of the seven historical hills of Rome; it is situated between the Quirinal and the Esquiline hills (you may wish to see a rough map of Rome). In this etching Giuseppe Vasi shows a nunnery which is situated at the top of the Viminal along Via Panisperna: the eastern section of the street links the nunnery with the apse of S. Maria Maggiore (on the Esquiline); the western section links it with SS. Domenico e Sisto (on the Quirinal). On both sides the street is very steep and Vasi shows the coachman whipping his horses in order to reach the nunnery.
The view is taken from the green dot in the small 1748 map below. In the description below the plate Vasi made reference to: 1) First entrance to the church; 2) Part of the nunnery; 3) S. Maria Maggiore; 4) Palazzo Cimarra. 3) is shown in another page. The small map shows also 5) S. Lorenzo in Fonte. 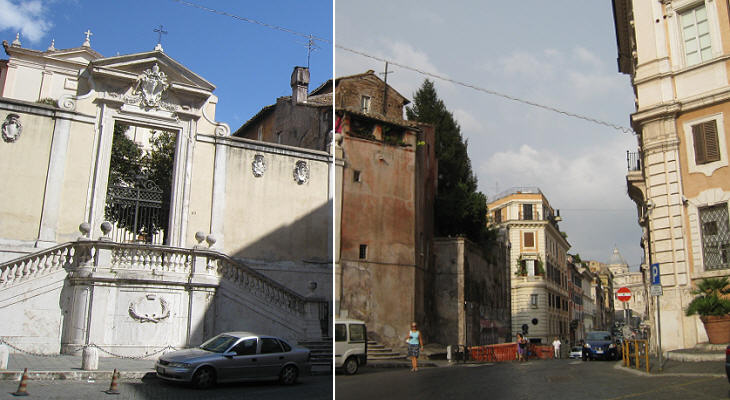 The view in March 2010 (at different hours of the day)

Some buildings along Via Panisperna and the first entrance to the church were modified in the late XIXth century, but overall the view is almost the same. According to tradition panisperna is a reference to panis (bread) and perna (ham) which were distributed by the nuns on August 10, St. Lawrence's Day, but there are many other possible explanations. 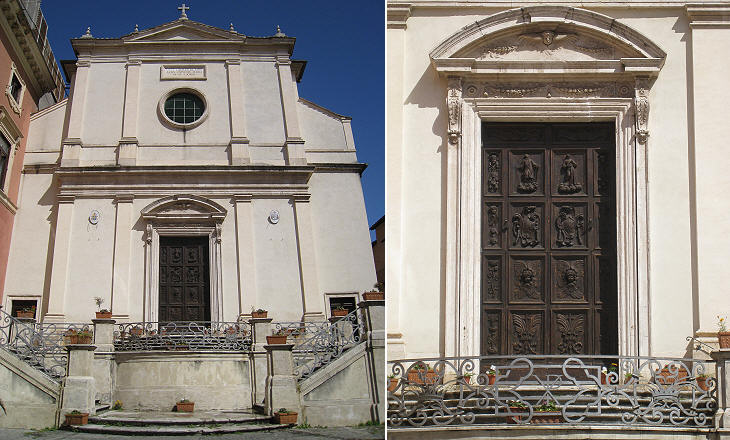 The first church was probably built at the time of Emperor Constantine on the site of St. Lawrence's martyrdom; the church was rebuilt in the XIVth century together with a large nunnery which was assigned to the Poor Clares. The façade was redesigned in 1574, while the elaborate wooden door was made in 1684.
You may wish to see the church as it appeared in a 1588 Guide to Rome. 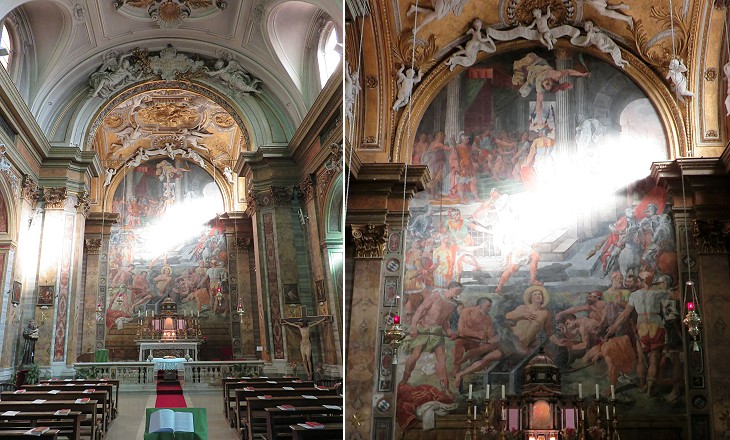 (left) Interior; (right) overall view of the fresco by Pasquale Cati behind the main altar

In 1577 Cardinal Charles Borromeo issued guidelines on the construction and decoration of churches. One of the recommendations he made was that paintings should place emphasis on the life of the early Christian martyrs and in particular on the courage they showed under torture. In ca 1590 a very large fresco covering the whole flat wall behind the main altar of S. Lorenzo in Panisperna was commissioned to Pasquale Cati, a painter who worked at the decoration of Galleria delle Carte Geografiche in the Vatican Palace and of Cappella di S. Maria della Clemenza in S. Maria in Trastevere. 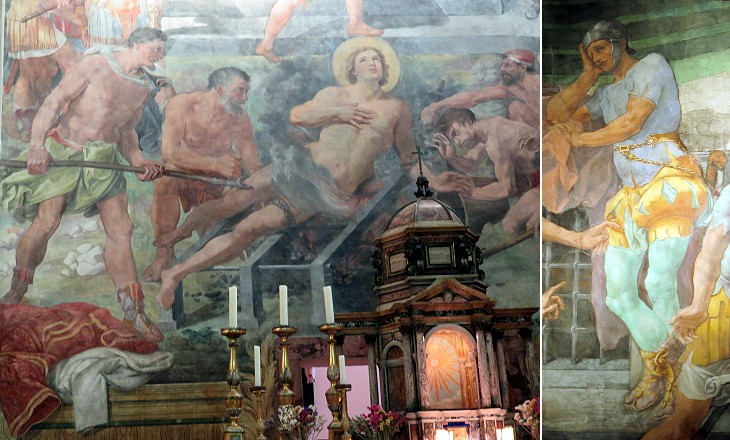 Details of the fresco by Cati

The fresco is unique because usually the main nave of a Roman church ends with an apse, the decoration of which is split into sections. In a way it calls to mind the Last Judgement by Michelangelo which covers the whole flat wall of Cappella Sistina. The emphasis on martyrdoms eventually led to the depiction of some gruesome details, but Cati's work is full of light and colours: St. Lawrence does not seem to care about the heat of the fire and a Roman soldier chooses to take a nap rather than watching the events. 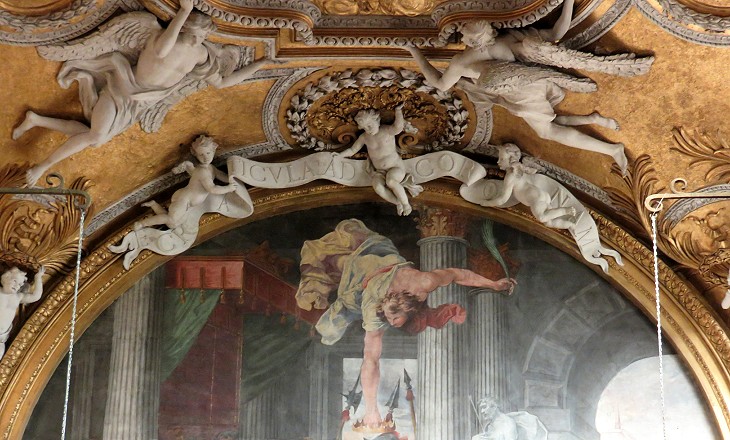 Upper part of the fresco showing an angel handing a crown to the saint; above it a 1757 stucco decoration by Niccolò Cartoni with an inscription saying "From the Gridiron to the Crown"

In 1757 the interior of the church was entirely redecorated with gilded stuccoes at the initiative of Cardinal Johann Theodor von Bayern, but Cati's fresco was not affected by the changes.
The nunnery adjoining the church was closed at the end of the XIXth century and it was eventually pulled down. (left) Bell tower; (centre) detail of the wooden door showing (left) St. Lawrence and (right) St. Francis; (right) tablet on a nearby building indicating it belonged to the nunnery (you may wish to see similar tablets)

Many houses in Via Panisperna which belonged to the nunnery retain tablets or decorations showing a gridiron, a reminder of the cruel way St. Lawrence was put to death. The image used as background for this page shows a relief in the courtyard preceding the church. 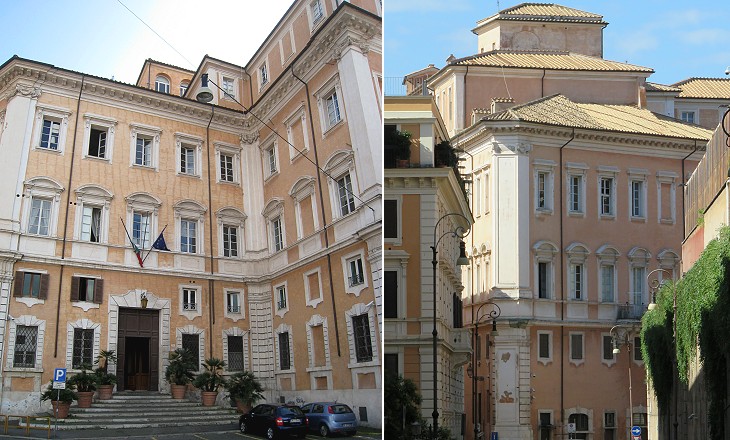 Palazzo Cimarra was built in 1736; it is attributed (without specific evidence) to Ferdinando Fuga who at that time was working at nearby Chiesa del Bambin Gesù. In the last years of the XVIIIth century it became the residence of Count Sousa Holstein, Portuguese Ambassador to the Papal State, whose son Pedro became a famous statesman. Notwithstanding the commanding view of its loggia over most of Rome, eventually the palace was used as barracks for the Papal Zouaves, a corps of infantry founded in 1861, whose members came mainly from France, Belgium and the Netherlands and fought at Mentana against Garibaldi's volunteers in 1867. 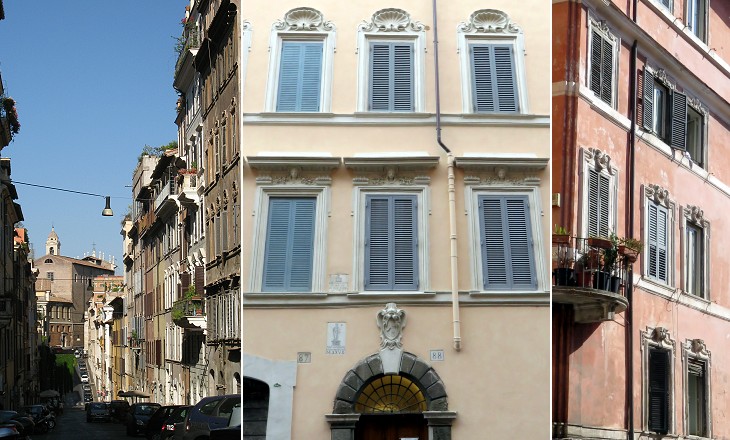 The neighbourhood has several other interesting XVIIIth century buildings and Palazzo Falletti along Via Panisperna has an elegant fountain in its courtyard. 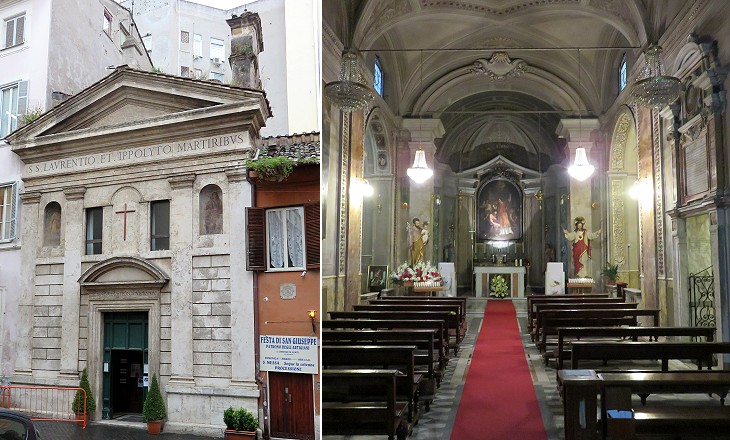 According to tradition St. Lawrence was imprisoned in the dungeon of the house of Hippolytus, a Roman centurion. In the dungeon there was a small spring (fonte) of water, which was used by St. Lawrence to baptize another prisoner, a blind man who recovered his sight. The miracle convinced Hippolytus to embrace the Christian faith. According to tradition (probably because his name could mean loose horse and because of Ovid's account of the death of Hippolytus, son of Theseus) Hippolytus was tied to two or four horses that dragged him to death; he is the patron saint of horses.
A church was built above the dungeon and it was dedicated to Lawrence and Hippolytus; it was rebuilt in the XVIth century and its façade was redesigned in the XIXth century. 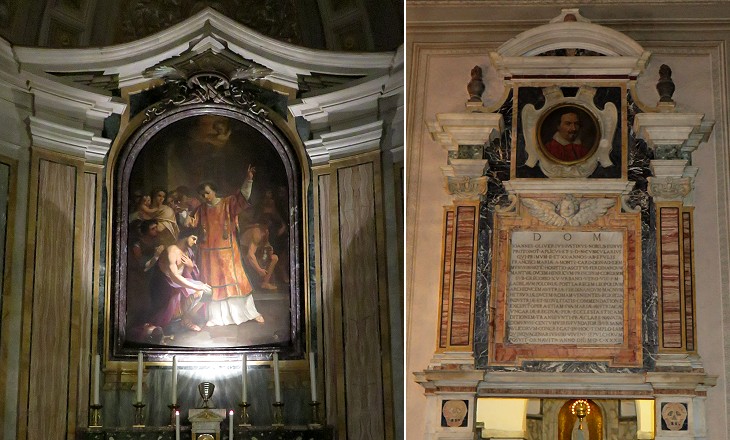 You may wish to see S. Lorenzo fuori le Mura, the large basilica which was built above the tomb of the saint. S. Lorenzo in Damaso, S. Lorenzo in Lucina and S. Lorenzo in Miranda are other historical churches of Rome which are dedicated to St. Lawrence. 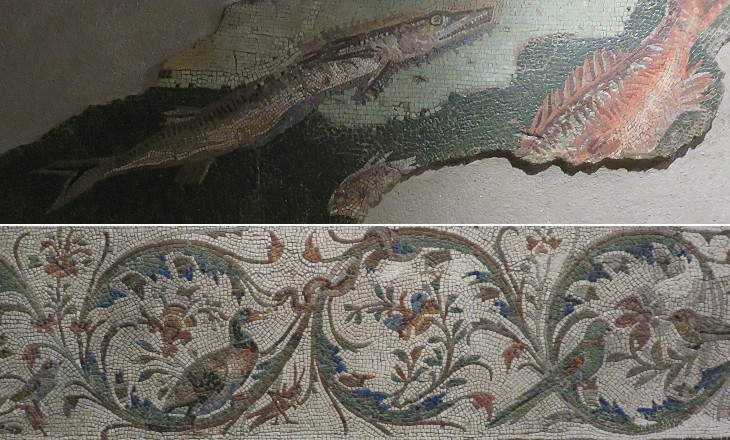 Centrale Montemartini: details of a mosaic found in 1888 near S. Lorenzo in Panisperna

In 1888 foundations of large ancient buildings were found during the opening of Via Cesare Balbo, a street to the right of the church. They included the hall of maybe public baths which was decorated with a very fine mosaic. It depicts sea creatures and it is framed by an acanthus scroll with birds and other small animals, including a cricket (these scrolls can be noticed in other mosaics, e.g. at Corinth and also in reliefs e.g. at S. Saba). According to tradition S. Lorenzo in Panisperna was built on the site of a palace of Emperor Decius and the baths might have been part of that building. 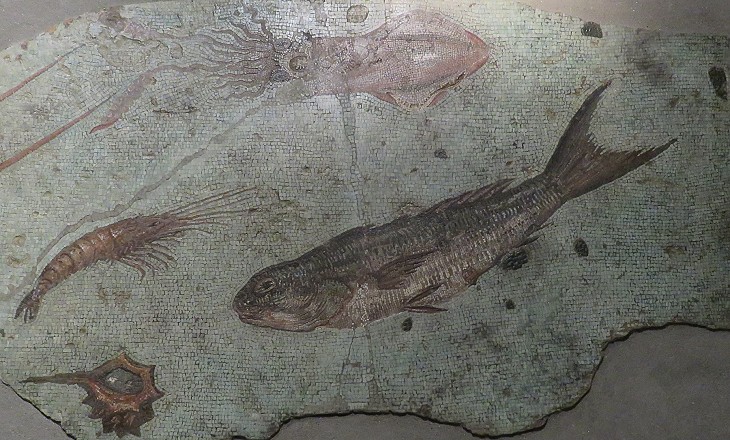 Centrale Montemartini: another detail of the mosaic; you may wish to see catalogues of sea creatures in mosaics in Tunisia and Spain 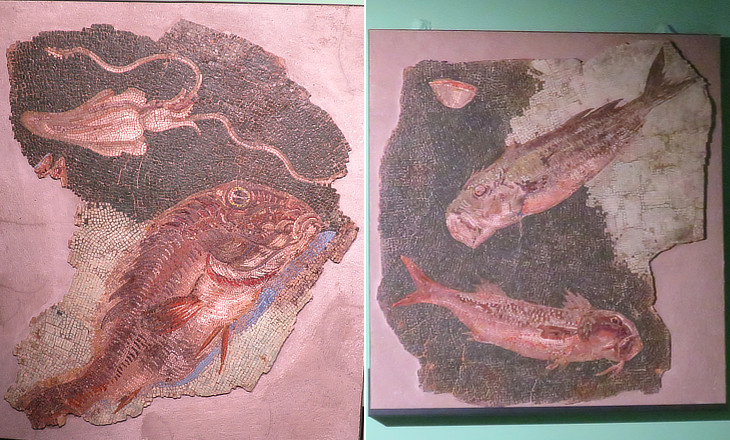