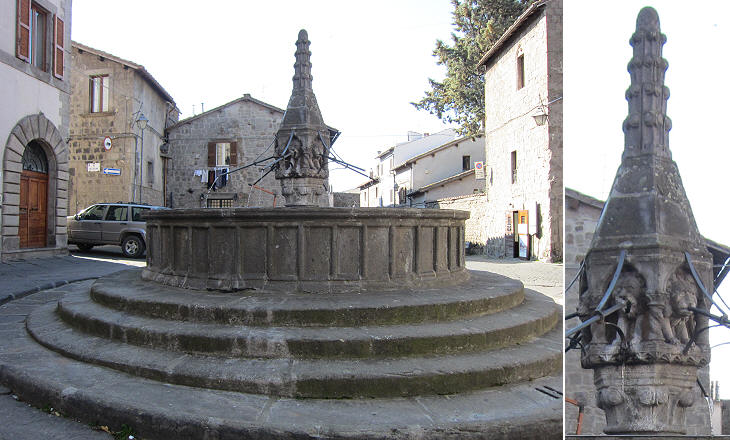 To his mother. April 1740. The night brought us to Viterbo, a city of a more lively appearance than any we had lately met with; the houses have glass windows, which is not very usual here; and most of the streets are terminated by a handsome fountain. Here we had the pleasure of breaking our fast on the leg of an old hare and some broiled crows.
Thomas Gray - Letters from France and Italy in 1739-1741
Viterbo, which the old chroniclers called "the city of beautiful fountains and beautiful women," is now rightly known as "the Nuremberg of Italy." Every street is a study. Such wonderful old houses, with sculptured cornices, Gothic windows, and heavy outside staircases resting on huge corbels! Such a wealth of sparkling water playing around the grand Gothic fountains, and washing the carved lions and other monsters which adorn them!
Augustus J. C. Hare - Days near Rome - 1875
Medieval Viterbo could rely on an aqueduct built in 1268 to supply water to the Papal Palace which was located on one of the three hills of the town; from there a system of underground conduits distributed the water to the southern part of the town where the neighbourhood of Pianoscarano is located. The fountain at Pianoscarano was built in 1376 and it replaced a previous one; it is decorated with lions, the symbol of Viterbo. 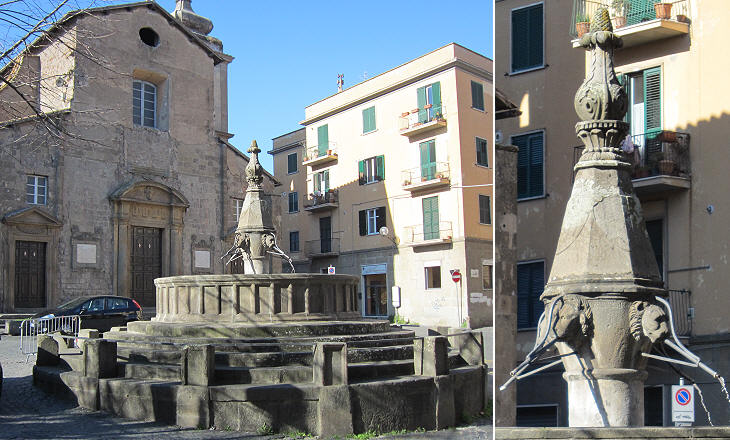 A sort of spindle at the centre of the basin characterizes the medieval fountains of Viterbo of which that shown above is one of the earliest examples (1251). 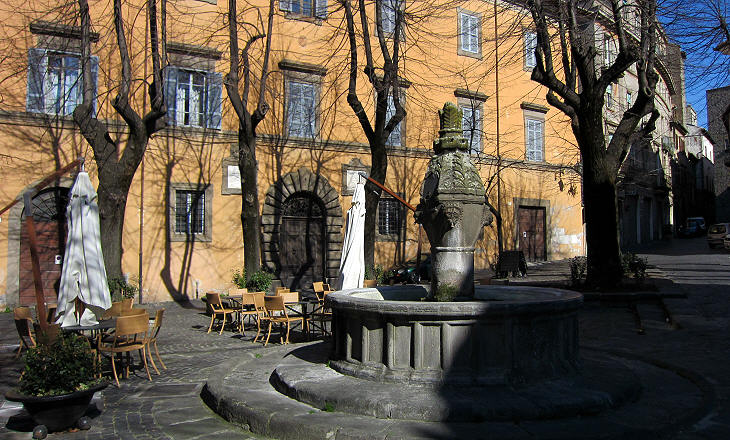 The fountain in Piazza della Morte is very similar to the previous one and it was built in the same period; the upper part of the spindle of these early fountains was decorated with classical motifs (palmettes, acanthus leaves, fir cones). 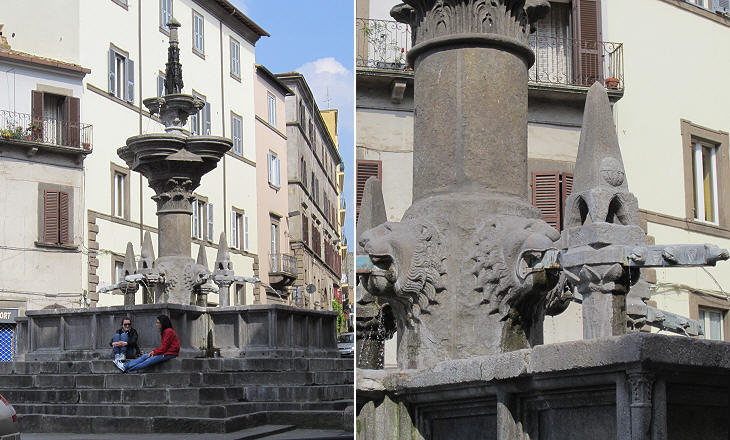 Fontana Grande is perhaps the oldest fountain of Viterbo, as it was built in 1212; its design was modified in 1424 with the addition of the central column, a reference to the heraldic symbol of Oddone Colonna (Pope Martin V, the reigning pope). 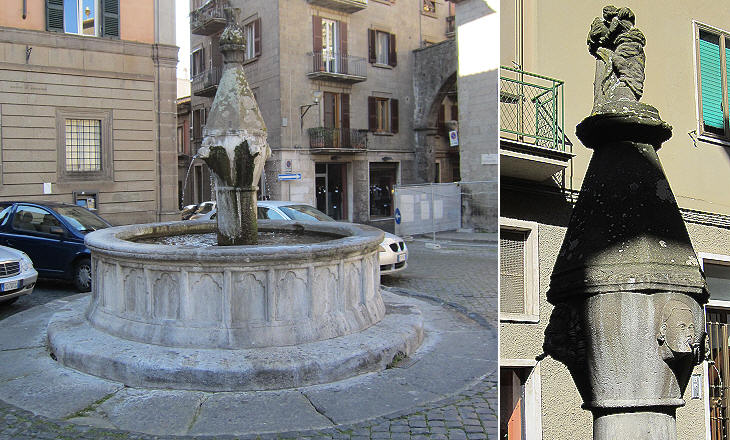 Many fountains were built at the initiative of the inhabitants of a neighbourhood which was identified with a parish church; the fountain in Piazza Alighieri was built by the parishioners of S. Giovann degli Zoccoli in 1268.
In the fountain of Piazza della Crocetta the traditional decoration of the upper part of the spindle was replaced by a small sculpture portraying an event of the life of St. Rose of Viterbo who lived in the neighbourhood and who is the patron saint of the town. 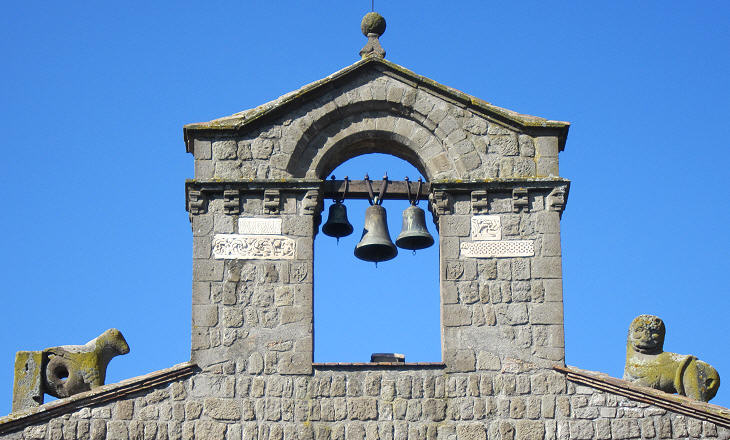 Detail of the façade of Chiesa del Gesù or S. Silvestro

Records say that this small medieval church existed already in 1080; it is known for an episode which occurred on March 13, 1271 and which is mentioned by Dante:

King Charles I of Sicily (Charles of Anjou) was in Viterbo to manoeuvre the outcome of a conclave; his retinue included Henry of Almain, nephew of King Henry III of England; in the Baron's War Henry of Almain sided with the king against Simon de Montfort, of whom he was also a nephew; Guy de Montfort, son of Simon, escaped to Italy where he became King Charles' representative in Tuscany; he came to Viterbo with his younger brother and they killed Henry of Almain while he was attending mass in this church; they were seeking revenge for the brutal death of their father at the Battle of Evesham. Henry's body was buried at Hailes Abbey in Gloucestershire, but his heart is buried in Westminster Abbey, by the shrine of the Confessor. Dante placed Guy de Montfort among the violent who are immersed in Phlegethon, a river of boiling blood and fire.
The murderer was leaving the church and boasting of his vengeance to his followers, when one of them reminded him that his father, Simon de Montfort, had been dragged in the dust, upon which, returning to the altar, and seizing the lifeless prince by the hair, he dragged him into the piazza. Hare 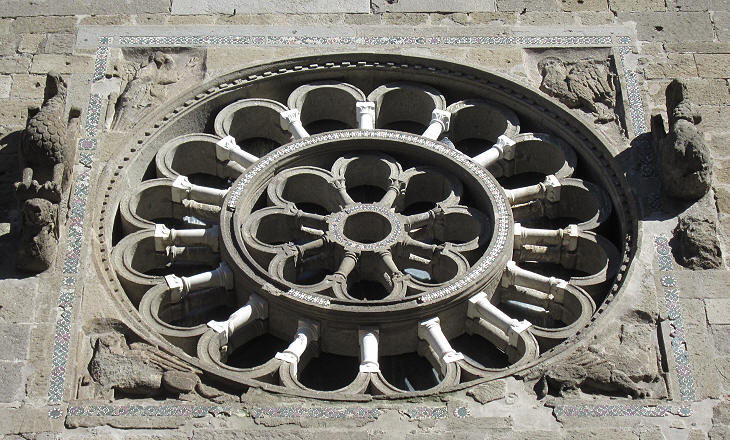 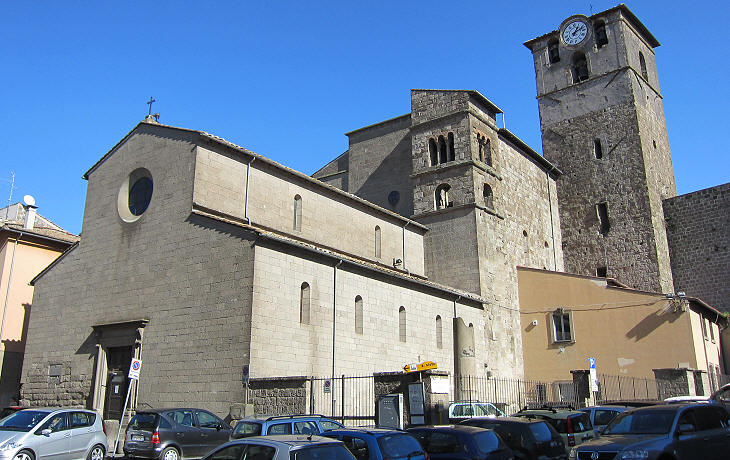 In May 1944 Viterbo was heavily bombed and many of its monuments were damaged including the front part of S. Sisto, a church built in the XIth century; it has two bell towers, one of which is lodged in a huge tower of the walls which protected a gate which was closed when Porta Romana was opened.

The Church of S. Francesco has an outside pulpit, whence S. Bernardino of Siena used to address the people. It contains several beautiful thirteenth-century tombs. Hare
The 1944 bombing destroyed the Franciscan church on the north-eastern hill of Viterbo; it was built in the XIIIth century and the reconstruction is an attempt to show its original medieval appearance; it houses the gisants (funerary monuments) of Popes Clement IV and Adrian V. 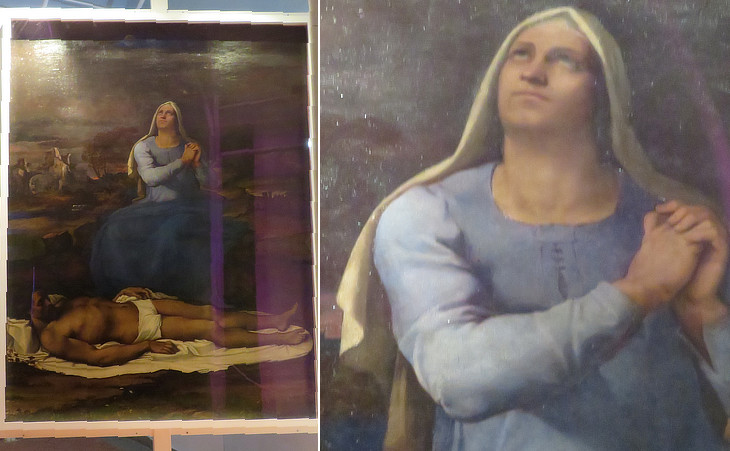 Town Museum: Pietà by Sebastiano del Piombo which was inside S. Francesco

Inside is the solemn thought-inspiring picture of "the Solitude of the Virgin," by Sebastian del Piombo, - the Madonna watching the dead body of Christ through the moonlit night. It is a grand subject, grandly carried out, and should be seen in early morning, when alone there is sufficient light in the church to illumine the barren distances of the picture, and reveal figures otherwise unseen.
"The works of Sebastiano having been exalted to great, or rather infinite, reputation by the praises lavished on them by Michael Angelo, to say nothing of the fact that they were in themselves beautiful and commendable, there was a certain Messer, I know not who, from Viterbo, who stood high in favour with the Pope, and who commissioned Sebastiano to paint a dead Christ, with our Lady weeping over him, for a certain chapel which he had caused to be erected in the Church of S. Francesco in Viterbo; but although the work was finished with infinite care and zeal by Sebastiano, who executed a twilight landscape therein, yet the invention was Michael Angelo's, and the cartoon was prepared by his hand. The picture was esteemed a truly beautiful one by all who beheld it, and acquired a great increase of reputation for Sebastiano." - Vasari. Hare 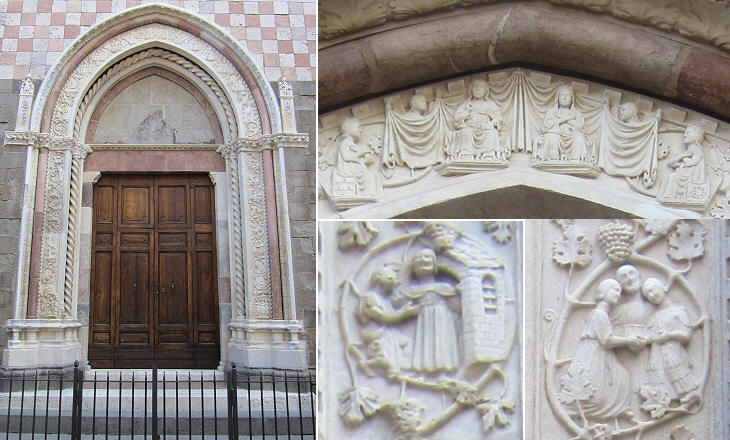 Many churches of Assisi (e.g. S. Chiara) are decorated with a pink stone which is quarried in the mountain behind that town; bearing this in mind Ugolino di Fardo, a member of the Third Order of St. Francis of Assisi, decided to decorate with that stone a small church which was part of a religious institution he founded for the care of the sick. The stone used at Viterbo for the construction of churches and palaces is a light peperino, so this XIVth century church stands out from the other medieval buildings (also for its elaborate decoration which depicts acts of mercy with a clear educational purpose).
The image in the background of this page is based on a detail of the church. 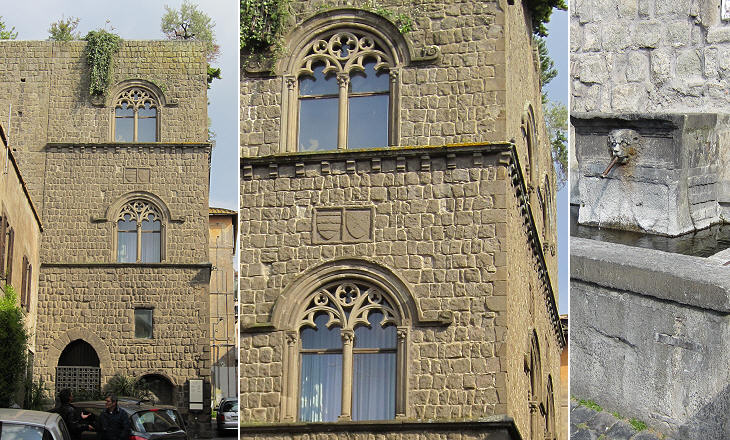 (left/centre) Palazzo Gatti; (right) a nearby fountain with the family's coat of arms

In the XIIIth century the Gatti were the most powerful family of Viterbo; Raniero Gatti promoted the construction of the Papal Palace and of the adjoining loggia which was decorated with the Gatti coats of arms.
The original family palace was made up by six towers linked by smaller buildings; of these only one (shortened) tower remains. 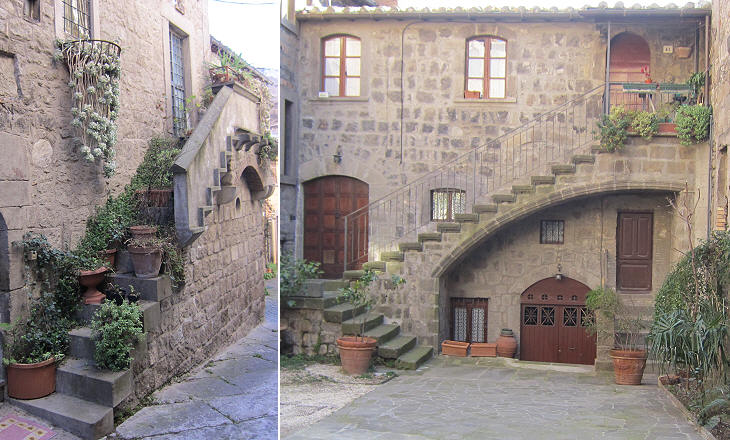 The finest medieval houses of Viterbo are characterized by a profferlo, a decorated external staircase leading to the main door; it is a heritage of rural buildings where the ground floor was utilized for stables and people lived above. The quarter of S. Pellegrino in the southern part of the town retains several medieval houses with more, or less, elaborate profferli. 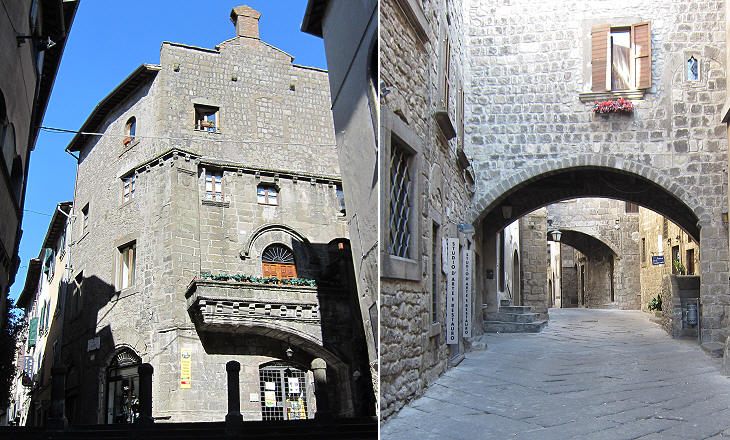