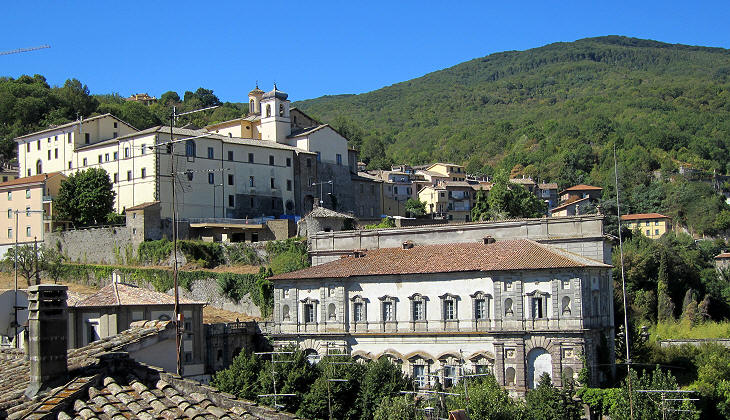 Soriano is situated on an offshoot of Mount Cimino, the top of which is still covered by thick woods, a feature which was common to the whole region when the Romans first ventured there. 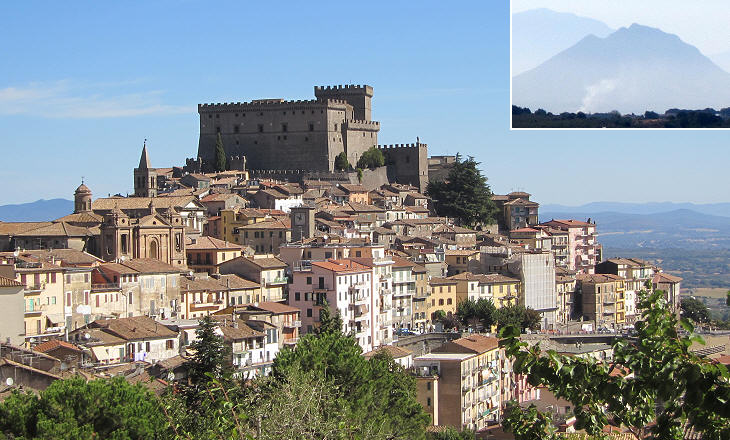 Soriano has a commanding position over the Tiber River valley. The view reaches Mount Soratte and Civita Castellana to the south and Orte to the north. Archaeologists believe medieval Soriano was built on the site of Surrina vetus, an Etruscan town which was destroyed by the Romans. It acquired importance in the XIIIth century when the popes used to live at nearby Viterbo. In 1278 Pope Nicholas III accused the Guastapane, the family ruling Soriano, of heresy and assigned the town to his nephew Orso Orsini (It. orso = bear). For the benefits the Pope gave to members of his family, Dante put him in Hell and made him say:

Nicholas was waiting for Pope Boniface VIII to join him in Hell. 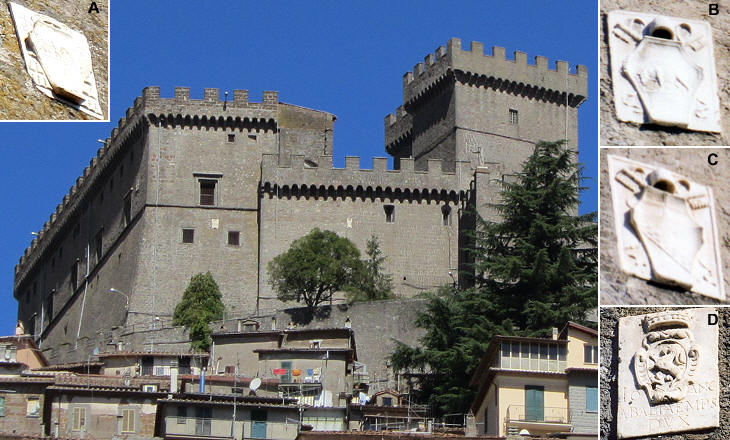 In the second half of the XVth century the castle built by Pope Nicholas III was strengthened by Cardinal Rodrigo Borgia on behalf of the popes of the time because Soriano in 1441 became a direct possession of the Papal State. In 1492 Cardinal Borgia was elected Pope Alexander VI and he gave the town to Cardinal Giovanni Battista Orsini to thank him for having supported his election. In 1579 Soriano was acquired by the Altemps. 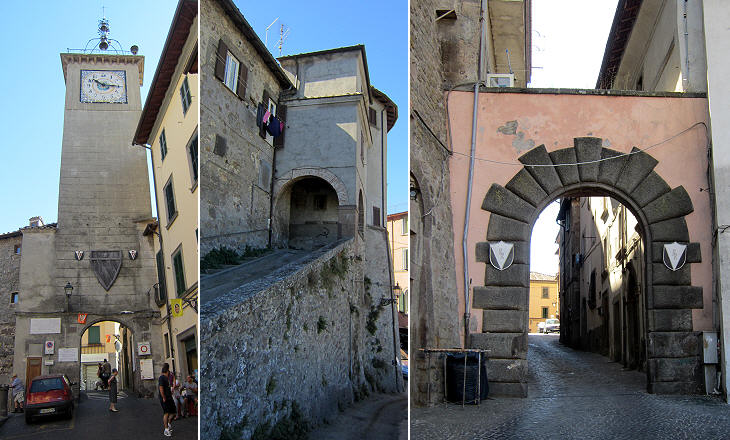 In the XVIth century Soriano expanded outside the medieval walls on the slopes of Mount Cimino opposite the castle. The old town had two gates protected by towers on its western side because on the other sides it was surrounded by a ravine. Porta Vecchia, notwithstanding its name (Old Gate), was opened in the XVIth century to facilitate communication with the new neighbourhood. 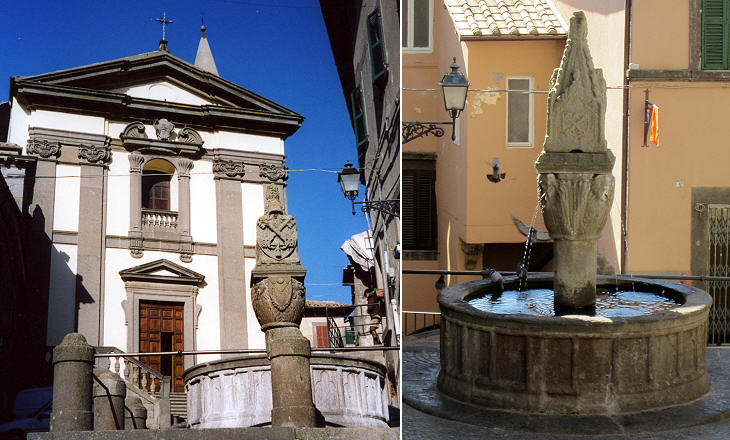 The old town is made up of twisting narrow streets which from the gates reach the castle. In the only square the inhabitants erected a church to Eutychius, a IIIrd century martyr who is buried in the outskirts of the town. The façade of the church was redesigned in the XVIIIth century. The same square houses Fontana di dentro (inside the walls) which bears the coat of arms of Pope Nicholas V. It has a spindle shape which is typical of the medieval fountains of Viterbo. 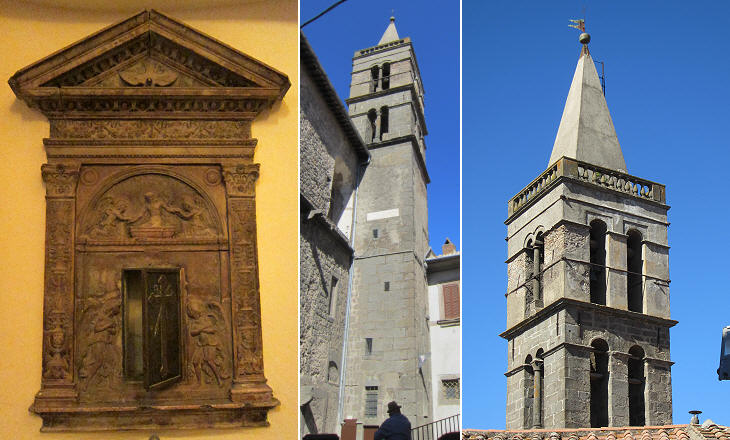 The interior of S. Eutizio was renovated in the XVIIIth century, but a tabernacle attributed to the school of Andrea Bregno, a leading sculptor of the late XVth century was retained. Provincial towns could not pay for large statues so they commissioned small works of art which they could afford. Similar tabernacles can be seen at Capranica and at Vetralla, two towns on the opposite side of Mount Cimino. 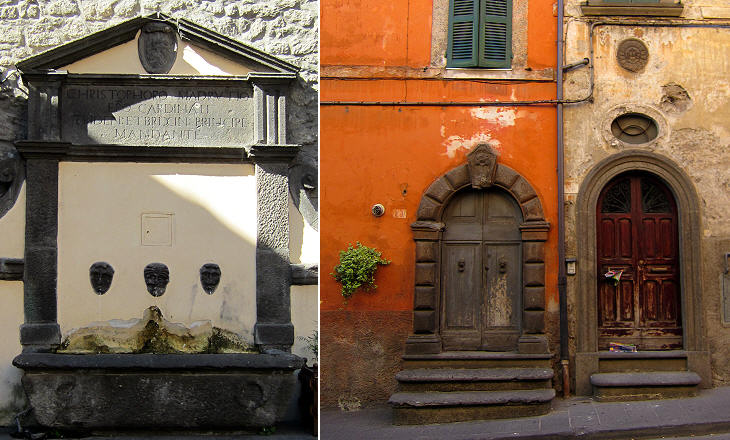 In 1560 Soriano and nearby Gallese were acquired by Cardinal Cristoforo Madruzzo, Bishop of Trento, who had been in charge of organizing the Council held in that town, during which issues raised by the Reformation were debated. Cardinal Madruzzo promoted the expansion of Soriano and to do so he built a fountain in the new neighbourhood for the inhabitants of a long series of adjoining houses, which still retain their XVIth century aspect. His nephew Fortunato sold Soriano to Cardinal Marco Sittico Altemps, his brother-in-law. 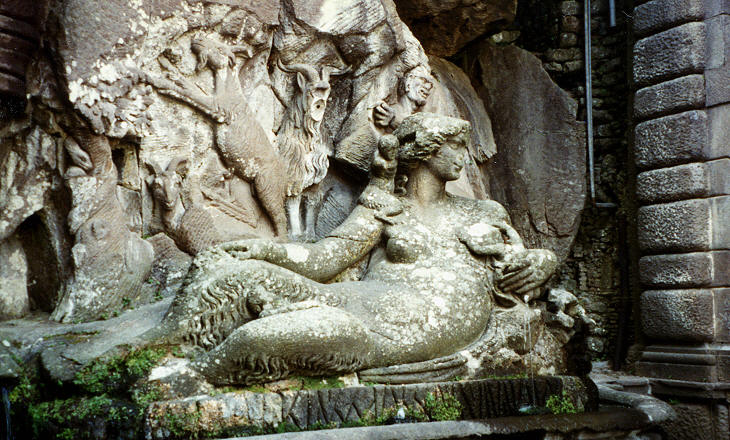 Cardinal Madruzzo knew Cardinal Alessandro Farnese, grandson of Pope Paul III, when the two were students at the University of Padua. They remained on friendly terms throughout their lives. Cardinal Madruzzo knew what Cardinal Farnese was building at nearby Caprarola and he had been invited by Vicino Orsini to visit his new palace and garden at Bomarzo, a small town a few miles north of Soriano. Cardinal Madruzzo felt that because of his rank he could not live in the old castle and started the construction of a palace and a garden in the new neighbourhood. Perhaps because of water supply requirements he chose an unusually low location, rather than a commanding one. The main fountain was cut into the rock, similar to those at Bomarzo. 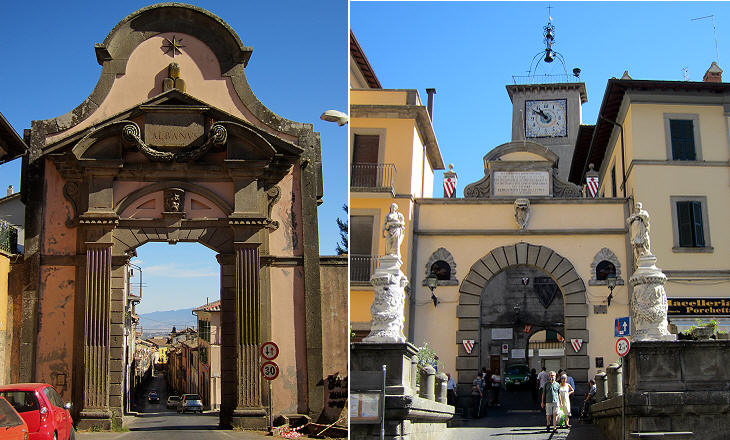 (left) Porta Romana; (right) Porta di Sotto (sotto = below, because it is situated below Porta dell'Orologio)

In 1715 century Soriano was acquired by Carlo Albani, nephew of Pope Clement XI who gave him the title of prince in 1721. Carlo Albani built a monumental gate bearing his name and his heraldic symbols (three mountains topped by a star) at the entrance the new neighbourhood, similar to what the Farnese had done at Ronciglione and the Marescotti at Vignanello.
Porta di Sotto, a new gate, was built at the entrance of the old town in front of Torre dell'Orologio in 1732 (it was reconstructed in 1949 after it was bombed in 1944).
The image used as background for this page shows the head which decorates Porta Romana. 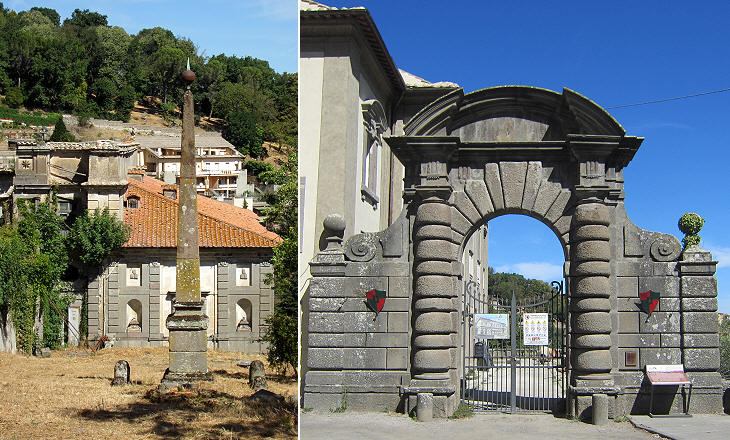 Carlo Albani and his son Orazio enlarged the palace built by Cardinal Madruzzo and decorated it with their heraldic symbols and an obelisk. At the same time Cardinal Alessandro Albani, a cousin of Carlo, was building a similar villa in Rome.
In 1848 the palace was inherited by the Chigi. Eventually the owners of the palace have not been able to properly maintain it and because of the risk of collapse, it cannot be accessed. In 2004 the Town of Soriano bought part of the estate, but its restoration was yet to be completed in August 2012. 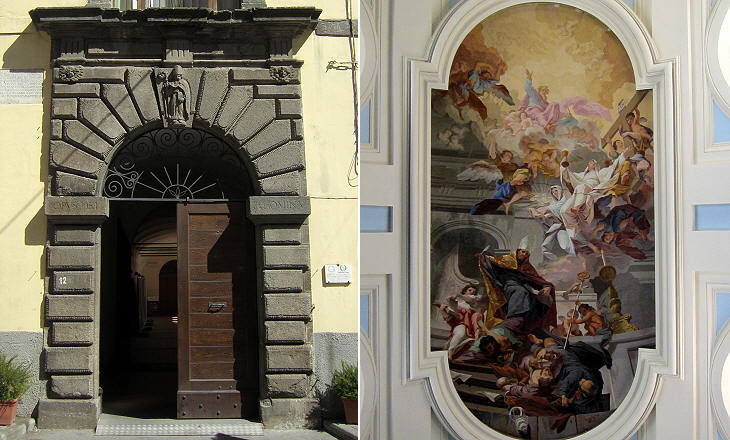 (left) Portal of the Augustinian monastery; (right) S. Vincenzo di Saragozza: the Triumph of St. Augustine by Taddeo Kuntze, a Polish painter active in Rome in the second half of the XVIIIth century. The saint was portrayed in the act of stamping out the Donatist heresy

A large Augustinian monastery stands on a commanding position over Palazzo Chigi Albani. It was built in 1644 and in the following century a large church dedicated to St. Vincent of Saragossa was built next to it. The saint was a IVth century deacon, whose martyrdom was celebrated every year by St. Augustine.
The monastery (but not the church) was confiscated after the 1870 annexation of the Papal State to the Kingdom of Italy and it currently houses the Town Hall of Soriano. 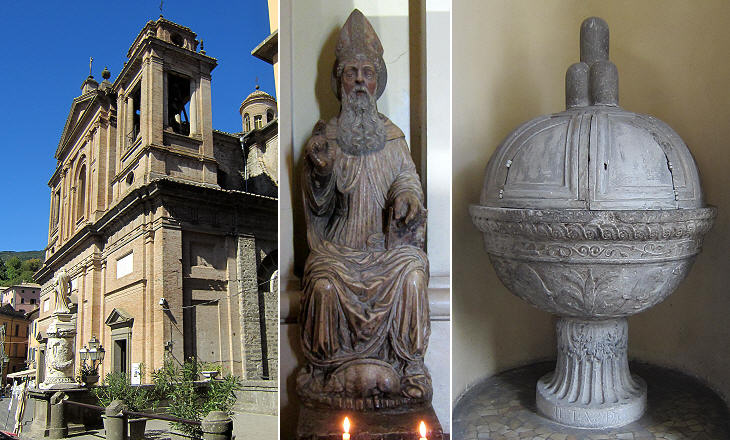 The most important church of Soriano was built in the late XVIIIth century outside Porta di Sotto at the junction between the old and the new town. It was dedicated to St. Nicholas, but it retains a medieval statue of St. Anthony the Abbot who is regarded as the patron saint of domesticated animals and is therefore venerated in rural areas (you may wish to see a ceremony which takes place in Rome on St. Anthony's Feast).