If you came to this page directly, you might wish to read a page on the town first. 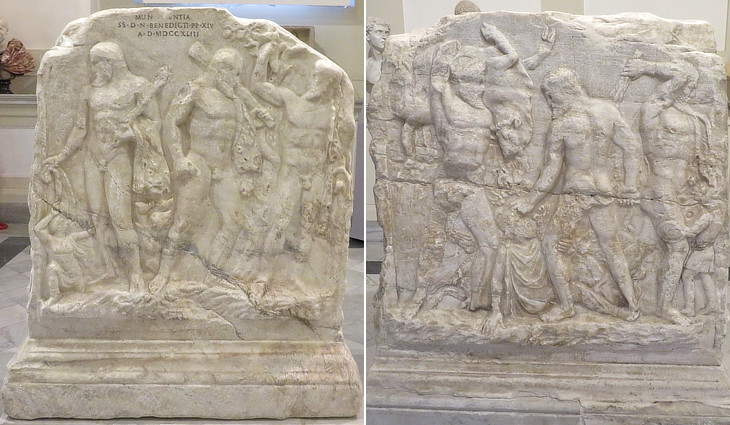 Musei Capitolini: altar with the Labours of Hercules (Ist century AD - see a fine sarcophagus depicting them and a very complex one at Velletri); it was found in ca 1743 in the terrace behind the Capuchin monastery which was part of the imperial villa: (left) the seizure of the girdle of Hippolyta; the chaining of Cerberus; the forcible possession of the golden apples; (right) the destruction of the Cretan bull; the punishment of Diomedes; the death of Geryon

In the centre of the room is a square altar, on which are sculptured in basrelief the labours of Hercules.
Rev. Jeremiah Donovan - Rome Ancient and Modern - 1843
The Museums of Rome house some works of art which were found at Albano and its environs. The 1944 Allied bombings on Albano led to the discovery of ancient buildings and to the finding of tombstones and sarcophagi; these, together with the yields of archaeological excavations of some Roman villas led to the foundation of a local museum in 1975. 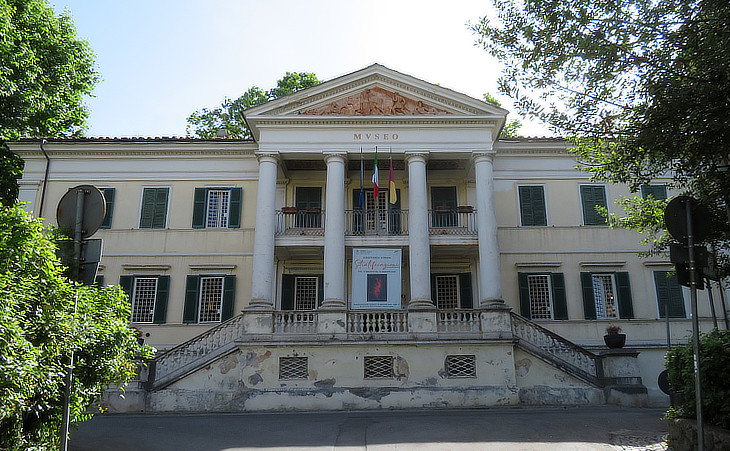 The building which houses the museum is named after Giuseppe Ferrajoli (1798-1870), who started his career as a junior accountant in the Torlonia bank. He rapidly gained the trust of Prince Alessandro Torlonia who eventually appointed him Director of the Salt and Tobacco Factories which the Torlonia managed on behalf of the State. In 1855 he was appointed to that post directly by the Finance Minister of the Pope. The business grew in such a way that a new imposing tobacco factory was built in Trastevere in 1863.
In 1840 Ferrajoli bought an existing small villa at Albano which he enlarged and after 1855 a palace in Piazza Colonna which is still named after him. 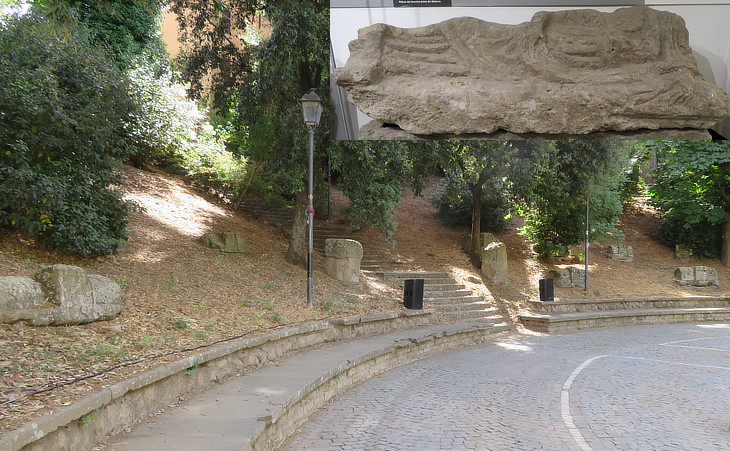 Rear side of the museum; (inset) a stone sarcophagus which recalls Etruscan patterns

Villa Ferrajoli is situated at Borgo Garibaldi, east of the town on the road to Ariccia which was the ancient Via Appia. The park was decorated with some stone sarcophagi and inscriptions which were found in the site; they have now been assembled in the rear of the building. Gaetano Ferrajoli, son of Giuseppe, gathered a large collection of manuscripts and old books which was eventually bequeathed to the Vatican Library. He and his two brothers did not have heirs. 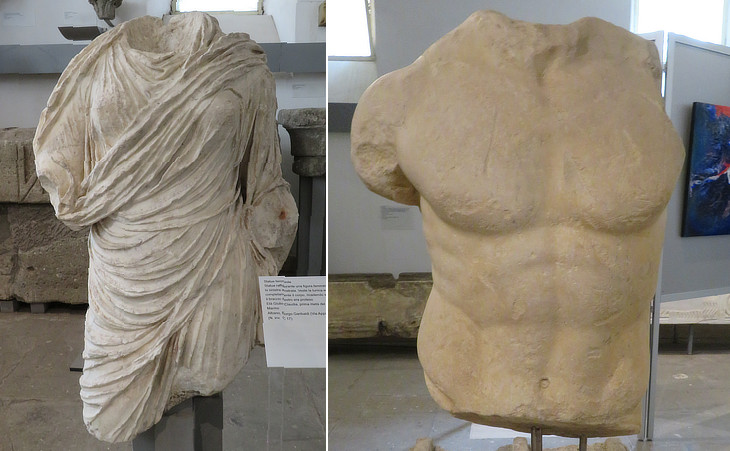 O you Alban hills and groves, and you, O you altars of the Albans, now overthrown, but nevertheless partners of and equals in honour with the sacred rites of the Roman people, you, whom that man (Publius Clodius, a political enemy of Cicero) with headlong insanity, having cut down and destroyed the most holy groves, had overwhelmed with his insane masses of buildings; it was your power then that prevailed, it was the divinity of your altars, the religious reverence due to you, and which he had profaned by every sort of wickedness, that prevailed.
Cicero - For Milo - translation by C. D. Yonge
Cicero had a villa at Grottaferrata, Pompey at Albano and Publius Clodius one which Cicero claimed was built on sacred ground. By the Ist century BC Albano and its environs were a favourite location for the countryside villas of the Roman upper class. 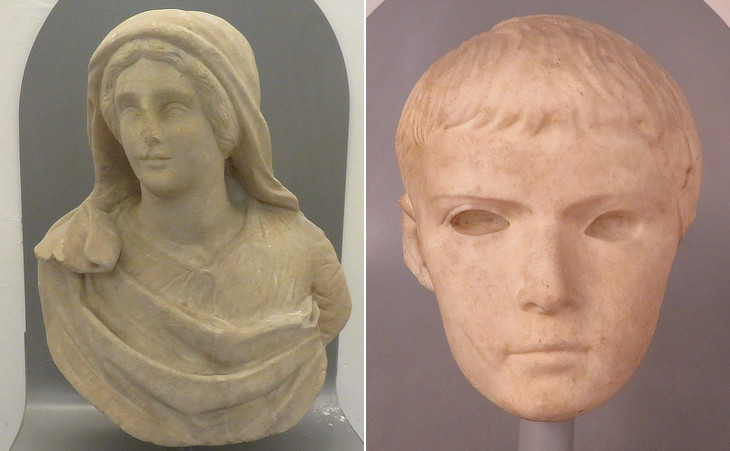 A Roman villa was recently found south of Albano at a site known as "Cavallacci". Archaeological excavations have not yet identified its landlords, but the fragments of its decoration indicate it was built in the early Ist century AD. It is possible that the landlord had a set of portraits of the imperial family, including that of Tiberius Gemellus, a practice which can be observed in other villas, also faraway from Rome (e.g. at Béziers in France). The eyes were most likely made of vitreous paste, something which is not much in line with the usual depiction of members of the imperial family. 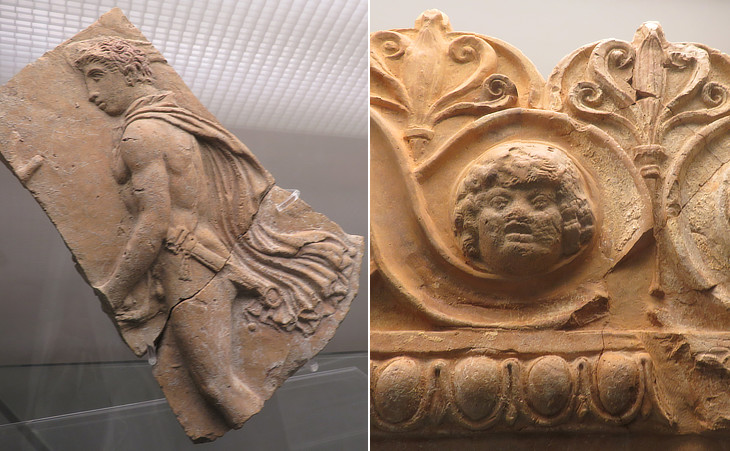 The terracotta reliefs call to mind those which decorated the Temple of Apollo which Emperor Augustus erected near his house on the Palatine. According to the prevailing tradition Sciron was a robber on the road between Corinth and Athens and he was killed by Theseus, the founder of Athens. 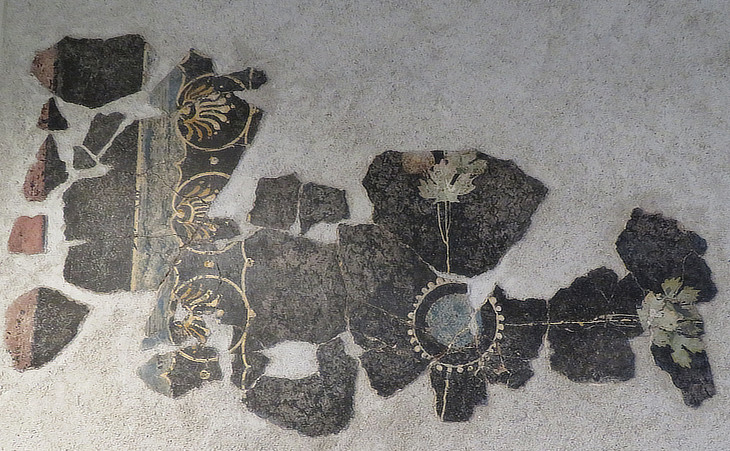 In general the rooms of Roman houses and villas were mainly painted with yellow and red tints, but a black background was often preferred for flowers and leaves as in the example shown above and at Villa della Farnesina in Rome and Vienne in France. You may wish to see the cubiculum (bedroom) of the House of the Orchard, a particularly interesting example of painting on a black background at Pompeii. 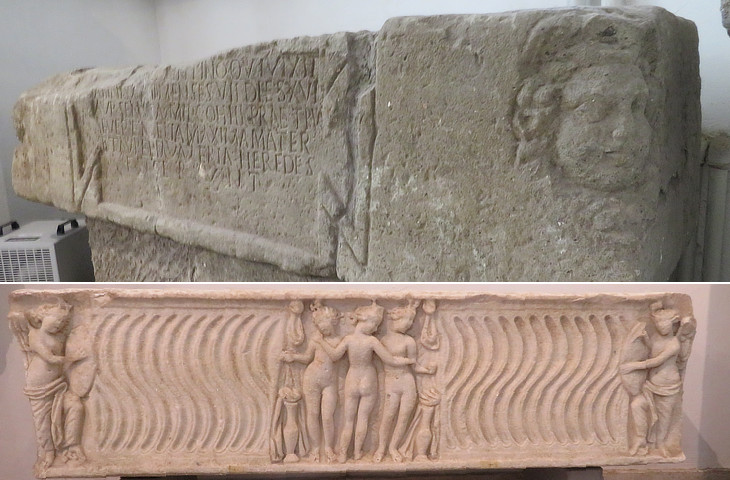 Early IIIrd century sarcophagi from Borgo Garibaldi: (above) of Clementinus with gorgons at the sides of the inscription; (below) box with reliefs portraying the Three Graces and two winged victories in the act of holding or maybe writing on a shield, similar to a relief of Colonna Trajana

"C[lem]entino qui vixit annis XXIII menses VII dies XVI Aur(elius) Seneca mil(es) coh(ortis) III praet(oriae) p(iae) v(indicis) Sever(ianae) et Aelia Maxima mater et Aurelia Valeria heredes fecerunt". The inscription is interesting because of its detailed reference to Legio Parthica. The peperino sarcophagus was found in the early XXth century while digging a sewer line.
The Three Graces were not frequently depicted on sarcophagi, which makes that at Albano rather unique (you may wish to see a directory of sarcophagi which are shown in this website or one of many floor mosaics portraying the Three Graces). 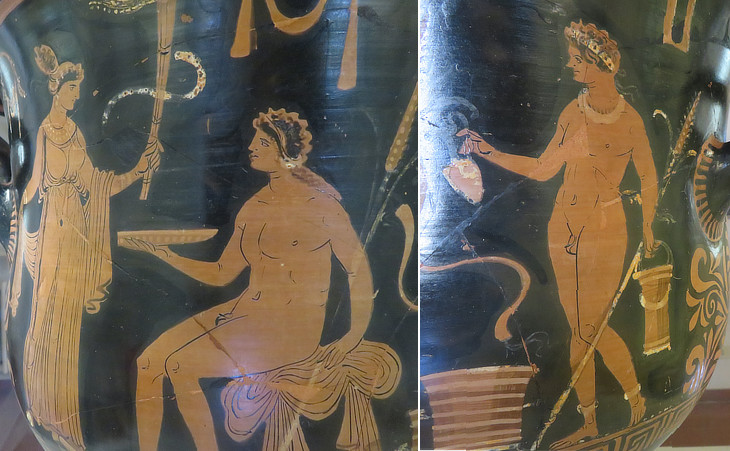 Details of a red-figure crater, most likely made in southern Italy (see an elaborate kylix, a wine-drinking cup, from Tarentum)

The museum displays a small number of vases; that shown above depicts two men carrying a thyrsus, a long wand or staff which is usually associated with events related to Dionysus/Bacchus. Although satyrs, half beast followers of the god were often portrayed in the act of assaulting a maenad or a nymph, in this vase the penises of the two men are almost symbolic, in line with the Greek tradition which regarded this detail as a sign of wisdom and moderation.

Where the traffic was greatest, for instance on the Appian Way, there were several inns in the same neighbourhood. (..) They were noisy, riotous dens, fit only for the lowest class of muleteers, and for peddlers and laborers, where scenes of altercation and blows occurred perhaps as often as they do at the present day in a suburban osteria.
Rodolfo Lanciani - Wanderings in the Roman Campagna - 1909
In many Roman towns, e.g. at Pompeii and at Dion in Greece archaeologists discovered mensae ponderariae, standard measurements of capacity which were certified by local authorities. The set discovered at Albano most likely belonged to a local inn. The small openings in the front side allowed the exit of the liquid into the cups of the customers which were placed below them. A small museum is dedicated to the Second of the three Parthic Legions which were created by Emperor Septimius Severus in 196-197 AD in order to fight against the Parthians. Since the second legion was the bravest and most loyal, in 202 it was stationed not far from Rome, at Albano, where its headquarters were established. The museum premises occupy some halls of the baths which Emperor Caracalla built for the legionaries. It mainly houses modern reconstructions of the attire and equipment of the main military ranks and other exhibits documenting the ordinary life of the legionaries. 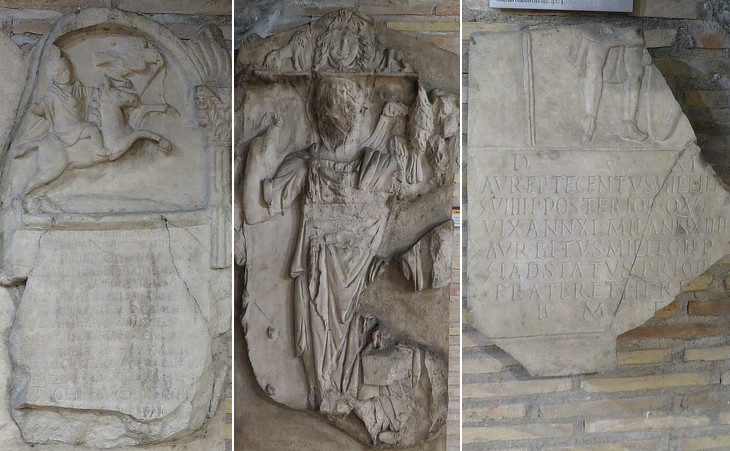 Museo della Legio II Parthica: casts of tombstones which were used as filling material for the construction of S. Maria della Rotonda: (left) Eutyches, a child of two; (centre) relief portraying an optio, an officer in charge of paying the legionaries and more in general the second-in-command in a centuria; (right) fragment of the tombstone of Aur(elius) Eptecentus of Legio II Parthica

The small tombstone of Eutyches was found in 1935; it contains a short epigram in Greek and a dedication in Latin. The dead, whose name means Good Luck in Greek is portrayed in the relief above the inscription. A horse led by an eagle is carrying him to Heaven. The use of Greek is an indication that most of the legionaries were recruited in the eastern part of the Empire. Another tombstone is without inscription but some details of the garb and equipment of the man who is portrayed in the relief indicate his military rank.
The tombstone of Eptecentus says it was a princeps posterioris, a centurion, of Legio II Parthica and that he was recruited at the age of 26, which is rather unusual. The name appears to be of Thracian origin. 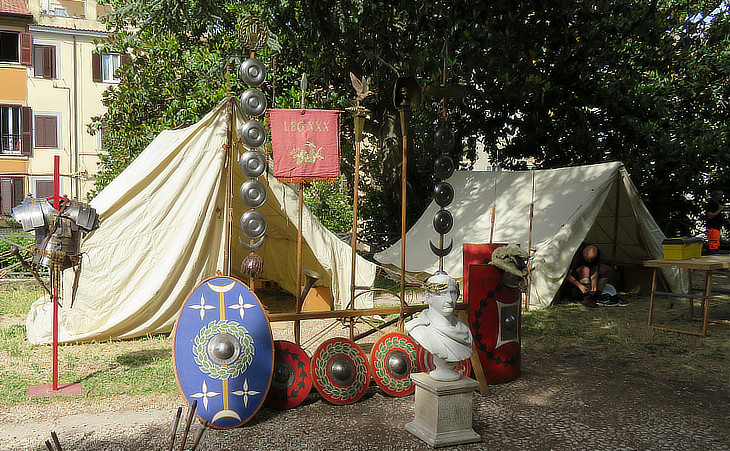 Return to Albano - the town or move to the next step in your tour of the Environs of Rome: Castelgandolfo