Mans is the capital of the dutchy of Maine, in the province of Orleanois in France. It is situate on an eminence, at the foot of which runs the river Sarte, which here unites its stream with the Huisne.
Thomas Nugent - The Grand Tour - 1749
The vestiges of the Roman rule at le Mans are not considerable, the chief are the remains of 3 subterranean aqueducts by which the city was supplied with water from a distance. A portion of them may be seen in a cellar of the Rue Gourdaine. Fragments also of the Roman town walls still exist, but all traces of an amphitheatre discovered in the last century have been swept away.
John Murray III - Hand-book for Travellers in France - 1843
When Nugent and Murray visited Le Mans the view of the Roman walls was impaired by small houses and hovels which were built on their external side. They were not demolished until the 1980s. This explains why the Roman heritage of the town received little attention in the past. 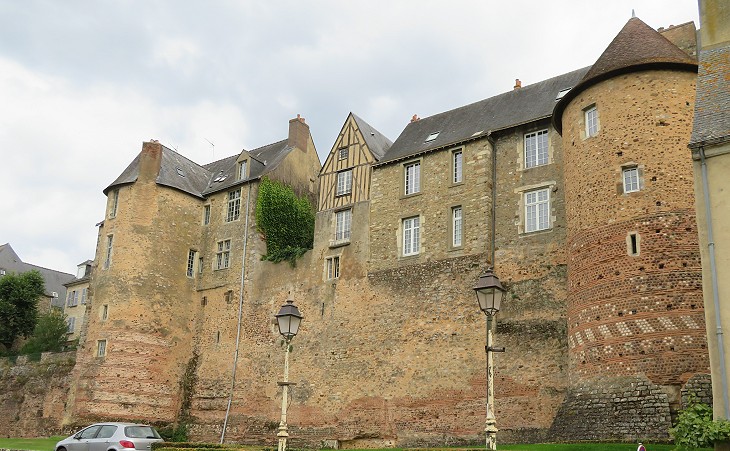 Roman walls in Rue Saint-Hilaire, along the western part of the town

The Gauls summoned a council of chiefs and determined not to call up (according to the proposal of Vercingetorix) all who could bear arms, but to require of each chief a certain quota from his state; (..) they required five thousand each from the Suessiones, Ambiani, Mediomatrici, Petrocorii, Nervii, Morini, and Nitiobriges; a like number from the Aulerci Cenomani.
Julius Caesar - The Gallic Wars - Translated by W. A. McDevitte and W. S. Bohn
That part of Gaul which is known as Lugdunensis contains the Lexovii, (..). Beyond this are the (..) and in the interior are (..) the Aulerci, both those surnamed Eburovices and those called Cenomanni.
Pliny the Elder - Historia Naturalis - Book 4 - Translation by John Bostock and Henry Thomas Riley.
The Aulerci Cenomanni were a minor Gallic nation, which is only briefly mentioned by Caesar. (Le) Mans is a corruption of Civitas Cenomanorum, a name that coexisted with Vindunum, which was of Gallic origin, dunum meaning fortified site as in Lugdunum (Lyon) and Augustodunum (Autun). 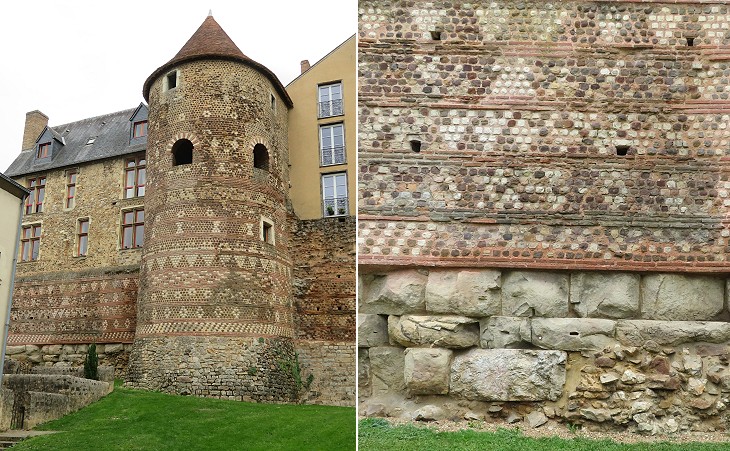 (left) Walls in Rue de la Porte Sainte-Anne; (right) detail of their lower layer which was made of large stones

The walls were built in the second half of the IIIrd century, similar to what occurred in many other towns of Gaul, to respond to the threat of raids by Franks, Alemanni and other tribes beyond the River Rhine and to the state of insecurity which was caused by the creation of a separate Gallic Empire in 260-273.
The walls at Burdigala (Bordeaux), Vesunna (Périgueux), Narbo Martius (Narbonne) and other locations were built by making a wide use of stones from buildings and monuments from the part of the town which was not to be protected by the walls. This occurred to a very limited extent at Le Mans, exception made for a layer of large stones at the base of the wall. 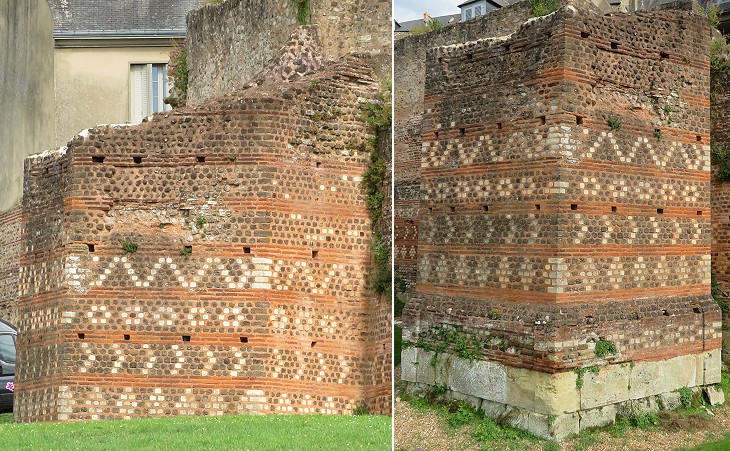 Towers in the northernmost section of the western walls; the image used as background for this page is based on a detail of their decoration

The construction technique employed in the walls of Le Mans can be regarded as a type of opus listatum, which consists of alternate layers of bricks and stones. This technique was developed to reduce the use of bricks which were more expensive than stones; per se it had a decorative effect which is very evident in the Walls of Constantinople, but also in civilian buildings, e.g. the Amphitheatre of Bordeaux. What makes unique the walls of Le Mans is the decoration of the stone layers, which was obtained by using black and white small stones to form geometric patterns. It indicates that the walls were not built in haste to face an imminent threat. 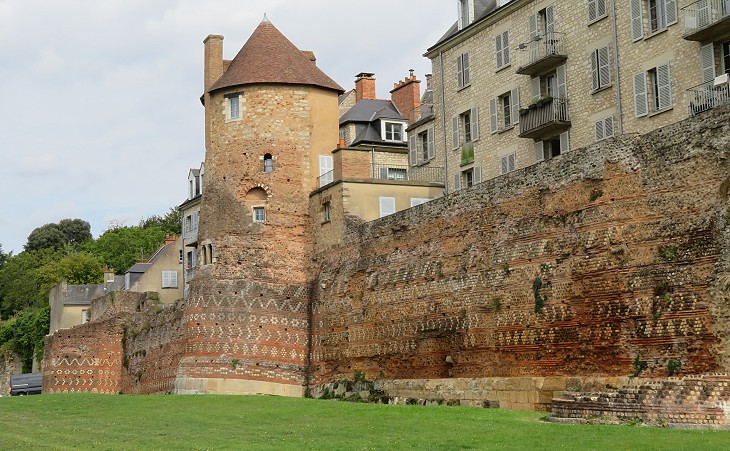 Northernmost section of the western walls

The walls were restored in the IXth century when the town was under threat of being attacked by Bretons and Vikings, but they were partly replaced by new walls on the northern and eastern sides of the town in the XIth century. The addition of round roofed turrets gives them a cosy medieval appearance, which perhaps was emphasized on purpose in the 1980s; it calls to mind some creative restorations by Eugène Viollet-Le-Duc, e.g. at Toulouse.

The inner side of the walls is much lower than the external one, because the town stands on high ground. It can only be guessed because it was incorporated into later buildings. Overall the walls had 26 towers, of which 11 with three posterns can still be identified on the western side. 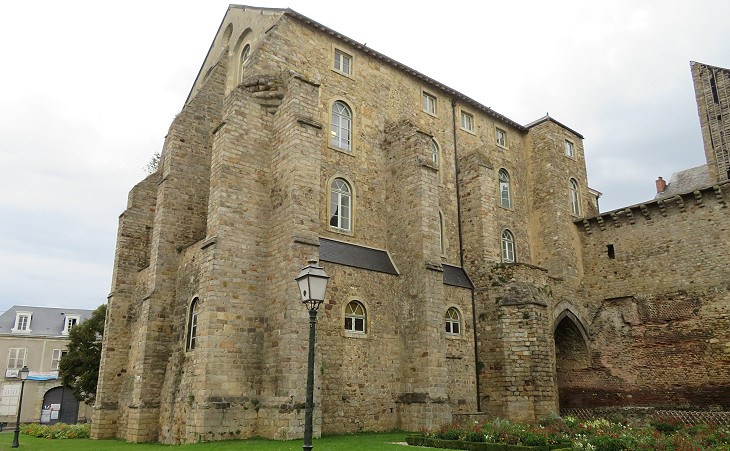 St Pierre is supposed to be the oldest church here, that is to say the lower part of its walls. Murray
This imposing church was much smaller when it was built in the IXth century; it stood on the eastern walls and on a projecting postern. The section outside the walls was built in the XIIIth/XIVth centuries and it was fortified during the Hundred Years' War. In the 1980s chance excavations south of Saint-Pierre-La-Cour led to the discovery of a Roman bath establishment which was destroyed by the construction of the walls. 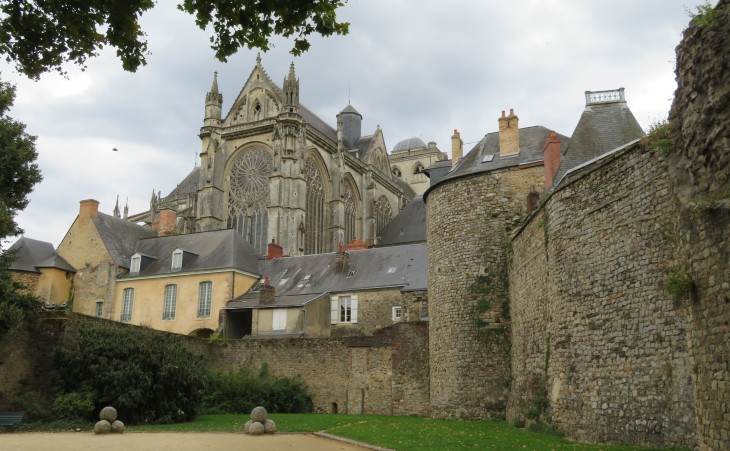 Medieval walls and Gothic choir of the Cathedral

Formerly it was much larger, than it is at present; though it is still a considerable city, being a bishop's see, and containing about 15000 inhabitants. (..) The cathedral dedicated to S. Julian, its first bishop, is a fine old building, remarkable for its choir. (..) The other principal structures are, the episcopal palace, the tower of Orbitello (Orbrindelle), the palace of the presidial, and the town-house. Nugent
In 1063 William the Conqueror seized Le Mans and immediately decided to strengthen its defences by building Tour d'Orbrindelle, a now lost huge tower outside the northern walls, and a castle next to the site where a new Cathedral was being built. The castle was dismantled in 1617, but some walls and towers which linked it to the Cathedral can still be seen. 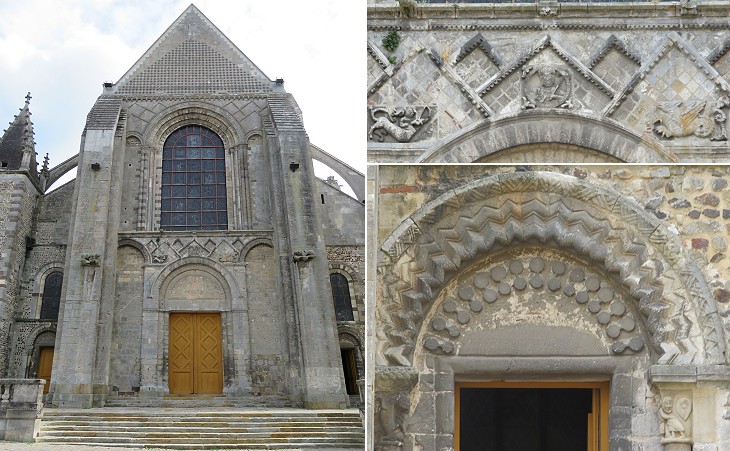 Cathedral: (left) façade; (right-above) decoration above the main portal; (right-below) small side portal with decorative motifs similar to those in the bell tower of Notre Dame at Saintes; the chevron pattern can be seen also in England and Sicily

The principal edifice is the Cathedral of St Julien which is well deserving of attention. (..) Above the W door are portions of reticulated masonry and an ancient bust of a king or bishop, on each side are figures supposed to represent the signs of the zodiac Capricorn and Sagittarius. Murray
The Cathedral of Le Mans (..) is a good example of well developed Romanesque. The west front is simple but impressive, with a round-headed doorway surmounted by a great window opening, recessed within several receding orders. The upper part is faced with reticulated masonry enriched with bands or mouldings in relief, arranged to form patterns.
Thomas Graham Jackson - Byzantine and Romanesque Architecture - 1913
The Cathedral occupies the northern part of the town and it was built above the Roman Forum, of which no evidence at ground level is visible. 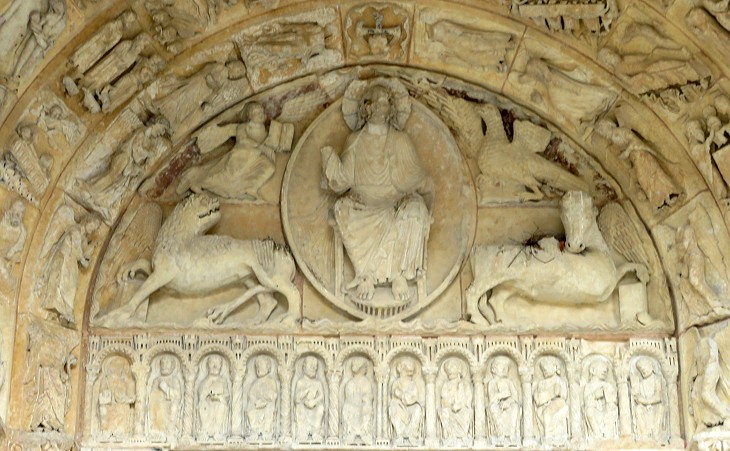 Cathedral: tympanum of the southern portal with features similar to those which can be noticed at Basilica of Saint-Sernin at Toulouse and even more at St. Trophime at Arles

On the S side is a very richly carved Romanesque doorway, a round arch preceded by a pointed porch. (..) It is much mutilated unfortunately. Murray
The tympanum has a figure of our Lord in a vesica piscis, or rather an aureole, between the four apocalyptic beasts. Jackson. This type of pointed aureole is known also as mandorla (almond nut); see other examples at Pomposa and Constantinople.
The depiction of the Twelve Apostles inside niches derives from a pattern developed for the Twelve Labours of Hercules or other series of events in Roman sarcophagi. It is in two styles: the Nave Romanesque, though with pointed arches, dates probably from the 12th century, but its side aisles and walls and the plain W front are not later than the 11th, perhaps much earlier. (..) Indeed the external masonry of the side walls resembling Roman constructions is probably part of the original church founded in the 8th or 9th century. Murray
The capitals of the nave columns are of a Corinthianizing character, preserving the tradition of angle and intermediate volutes, which shows that the influence of classic art was felt here, (..) although in this part of France the remains of Roman art must have been far fewer than in the south, and of inferior execution. Jackson 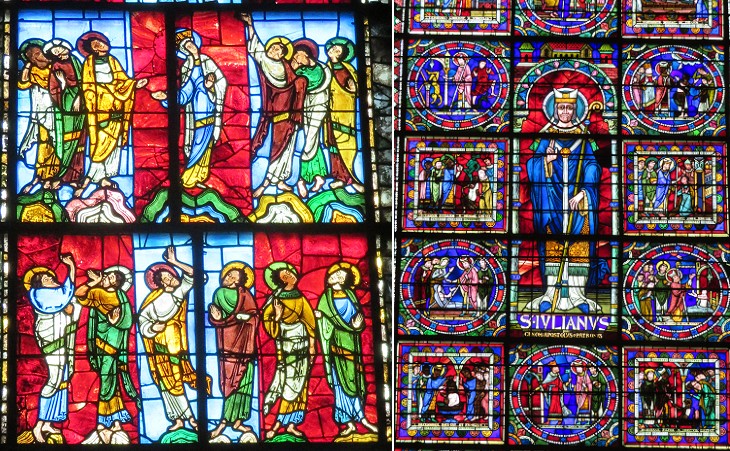 Cathedral: stained glasses: (left) scenes of the Ascension; (right) scenes of St. Julian's life (XIIth century - greatly restored in 1897 after it was badly damaged by the Huguenots and by thunderstorms - you may wish to see stained glass depicting St. Stephen's martyrdom in the Cathedral of Laon)

The oldest painted picture-window that has survived the action of time is one representing the Ascension in the cathedral of Le Mans, which is believed by many antiquarians to be a work of the late eleventh century. The glass composing it is very beautiful, more particularly the browns, which are rich in tone, the rubies, which are brilliant, streaked and studded with gemlike blobs of black, and the blues, which are of a greenish azure hue, while the general colour treatment is extremely oriental. The drawing of the figures is most effective, although simple in line, and Byzantine in character. (..) Although Le Mans was one of the first places where windows made by the new process were used, yet it did not become the centre of work.
Catholic Encyclopedia - Stained Glass by Caryl Coleman - 1913. 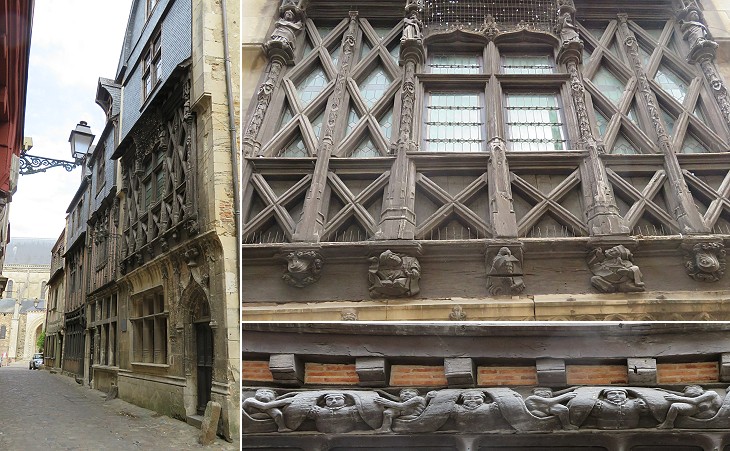 The four principal streets are tolerably handsome, but the rest are narrow and crooked. Nugent
This church contains the monuments of Berengaria of Sicily, Queen of Richard Coeur de Lion brought from the Abbey of Epau and much defaced. Murray
Berengaria of Navarre (French: Bérengère; c. 1165-1170 - 23 December 1230) was Queen of England as the wife of Richard I. She married him at Limassol in 1191 and she followed him in his campaigns in the Holy Land. She then settled in France and in 1204 at Le Mans. Because of its association with the Plantagenet dynasty, the Vieux Mans, the historical centre of the town, is referred to as la Cité Plantagenêt since 2003 when a tourism promotion initiative was launched. 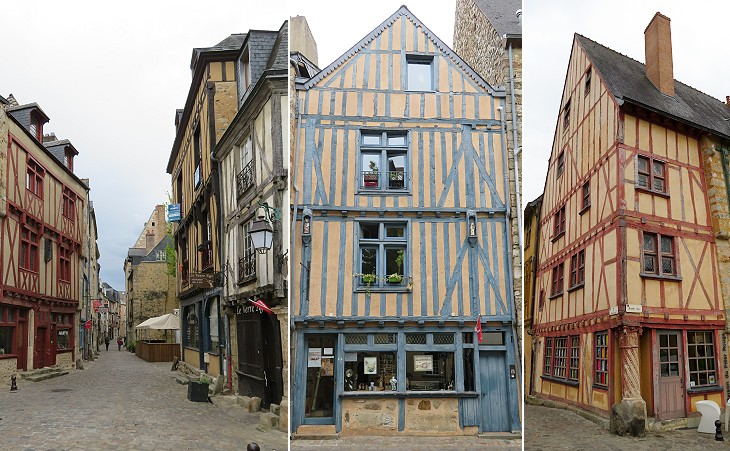 (left) Grande Rue; (centre/right) some of its historical houses (you may wish to compare them with those at Toulouse and at Limburg an Lahn)

Many specimens of ancient domestic architecture still remain here; especially in the Grande Rue they deserve attention. Murray
The Grand Rue most likely corresponds to cardo maximus, the main north-south street of the Roman town. 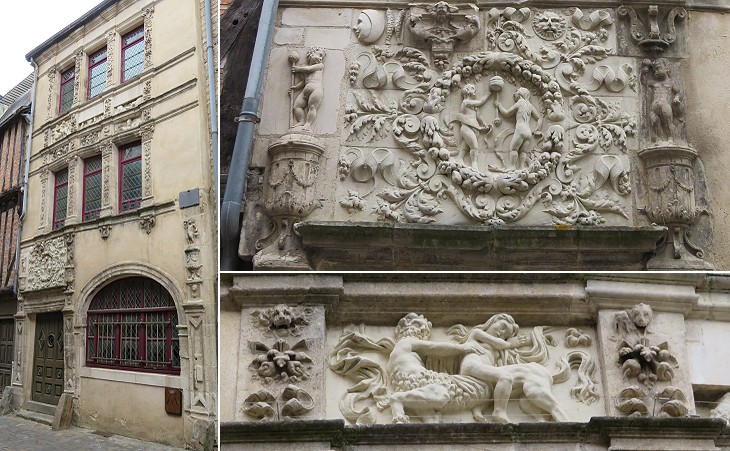 (left) House of Adam and Eve in the Grande Rue (1528); (right) details of its decoration; the relief probably portrays Bacchus and Ariadne rather than Adam and Eve