- Villa del Casale: Clues to Life
(left) Temple to Hercules at Agrigento; (right) detail of the apse of Palermo's Cathedral

You may wish to read an introduction to this section or a page on the buildings of Villa del Casale or on its mosaics having a geometric pattern or a mythological subject first. This page shows some mosaics which provide clues to the life and the entertainments at the time Villa del Casale was built (late IIIrd century or early IVth century AD). 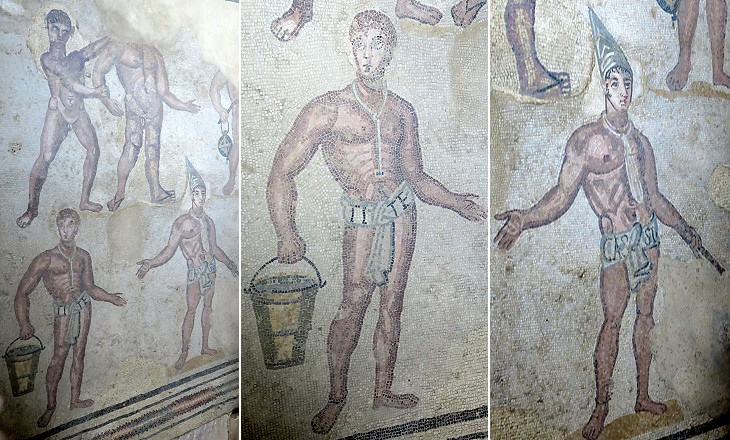 Room near the "frigidarium": servant Titus and musician Cassius

The landlord of Villa del Casale did not write his name in any of the mosaics of his villa, but he chose to pass on to posterity those of two slaves who massaged and entertained him and his guests in the baths adjoining the main building. The image of Titus brings to mind those of Buticosus and Iulius Cardus in baths at Ostia which perhaps the landlord had visited. The status of the two slaves is made evident by a ring on their right ankle. The conical hat worn by Cassius could indicate he was of Syrian origin and perhaps suggested a homosexual proclivity which the Romans attributed to the Syrians, especially after the experience they made with Emperor Heliogabalus. 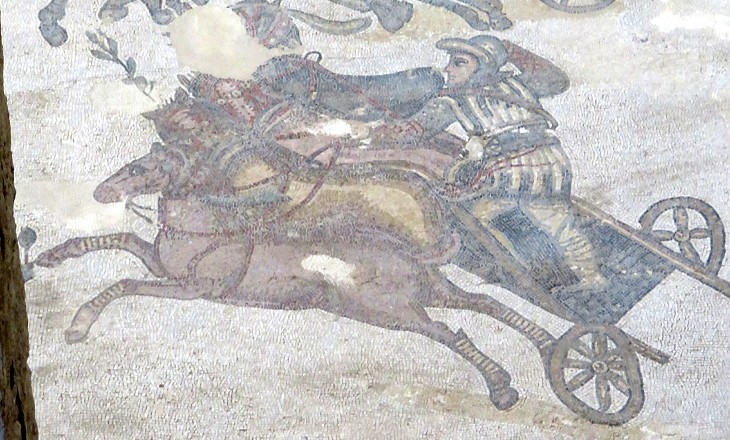 A charioteer in a large mosaic of the palaestra

Chariot races were always very popular in Rome, second only to the gladiatorial combats and these two forms of entertainment were often depicted in mosaics. A mosaic found in the outskirts of Rome and which is dated approximately as those of Villa del Casale shows the dramatic effects of gladiatorial combats with some gruesome details. The landlord of the villa was fond of chariot races and perhaps he was even involved in them as owner of a stable. When theatres and amphitheatres were closed at the initiative of St. Augustine and other bishops, chariot races became even more popular, not only in Constantinople where a large Hippodrome stood near the Imperial Palace, but also in the provinces as a VIth century mosaic found at Gafsa, in today's southern Tunisia, demonstrates. 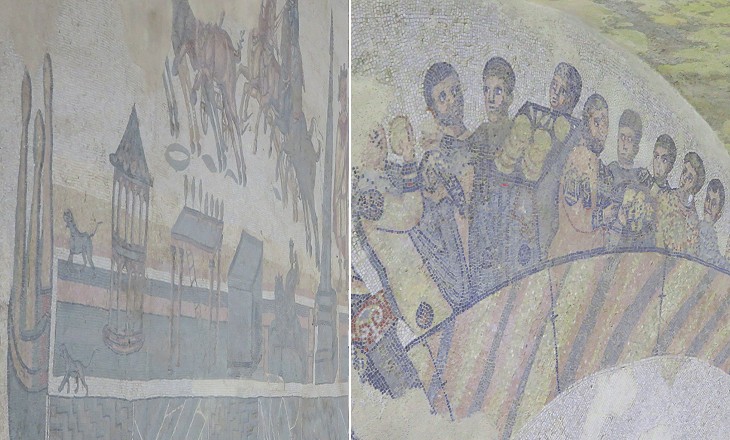 Palaestra: (left) the "spina" (thorn, the raised area around which the chariots raced) of Circus Maximus; (right) crowd watching the race

The race is set in the Circus Maximus of Rome and the mosaic shows some interesting details: on the spina, in addition to statues, obelisks, small temples and the metae which signalled the turning points, is visible a table with seven markers. These were progressively lowered to indicate how many laps of the race had been completed (they can be seen also in a mosaic in Lyon). In the crowd a man is distributing loaves of bread, perhaps he sold them, but maybe the loaves were distributed free of charge because the race was held during festivities* in honour of Ceres, Roman goddess of agriculture, to whom a temple was dedicated near the Circus.
* In B.C. 493 the worship of Demeter (under the name of the old Italian goddess Ceres) was introduced at Rome by the direction of the keepers of the Sibylline books, and a temple was built in her honour (aedes Cereris Liberi Liberaeque, usually called aedes Cereris) near the Circus Maximus. (..) In connection with this worship, games were instituted under the direction of the plebeian aediles. The festival was properly a plebeian one, but the patricians were invited to take part in it. At first the games were held only on extraordinary occasions, but afterwards they were celebrated annually from the 12th to the 19th of April, the last day being called especially the Cerialia. This spring festival was intended to commemorate the return of Proserpine to earth. From Smith's Dictionary of Greek and Roman Antiquities - 1890 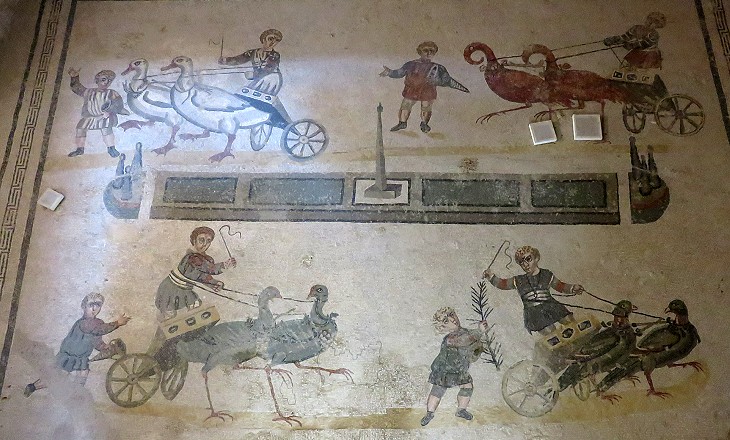 Room of the Small Circus

The same subject is depicted in a small room of the private apartments. Horses are replaced by birds and charioteers by children, but the number of racers (four) and their colours (red, green, white and blue) are true to life. In this and in the large mosaic the winner is the same, i.e. the green chariot (factio prasina) which suggests the landlord was a supporter of this stable. Emperor Caligula was very fond of Incitatus, a horse of factio prasina, and he made it a senator or a consul. More in general the supporters of this stable were members of the senatorial class to which most likely the landlord of Villa del Casale belonged. 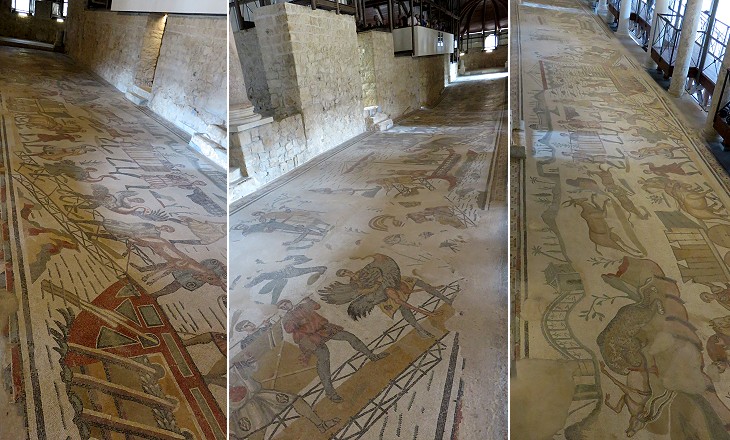 Hall of the Great Hunt

This very long corridor is situated on the side of the Rectangular Peristyle opposite the entrance and it gave access to the Basilica, a large hall where presumably the landlord received his guests, and to the private apartments. Its floor is entirely decorated by one single mosaic which is known as the Great Hunt. A more appropriate name for the subject of the mosaic could be Trade of Beasts for Venationes, fights with or between large wild animals, because while the hunting scenes of this mosaic are rather common, the loading of animals on board of ships catches the interest of the viewer. 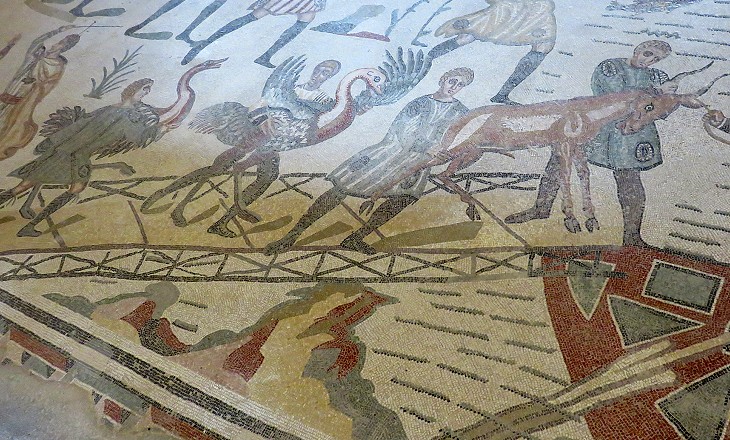 Hall of the Great Hunt: loading the animals on a ship (see another similar detail in the introductory page)

Many mosaics in today's Tunisia and Algeria show scenes were wild animals are captured alive (e.g. a mosaic of Hippo Regius). We know that these countries were home to the Barbary lions, a subspecies of lion which became extinct in the wild in the early XXth century and to the Barbary leopards which still live in remote regions of the Atlas mountains; a subspecies of African elephants lived in Tunisia in Roman time. The catching of these animals as well as of boars, ostriches and antelopes with long horns was the first step of a profitable trade which ended at Colosseo in Rome or in other large amphitheatres. 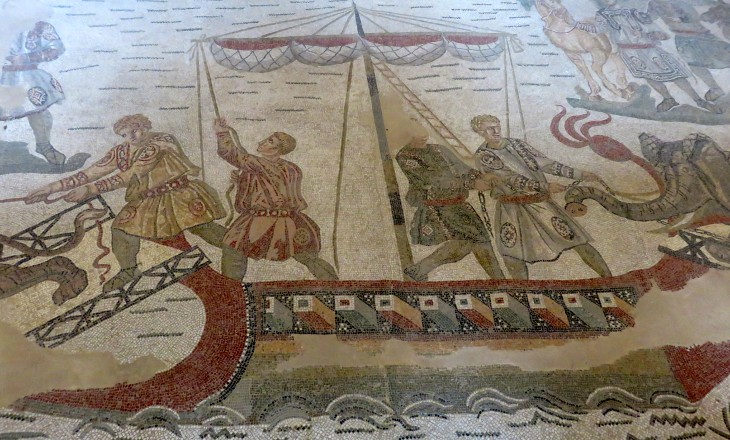 Hall of the Great Hunt: ship carrying the animals

The representation of the loading and unloading of animals is definitely symbolic, but the depiction of the ships, although simplified, provides interesting details on their sails, masts, steering oars and gangways (you may wish to see a more detailed Roman ship in a mosaic of Sousse). It could be that the landlord of Villa del Casale had a stake in this business or that the mosaic was meant to celebrate venationes he had offered the Romans. Assuming the latter statement is right Lucius Aradius Valerius Proculus, a politician who paid for games at Colosseo in 320, is a likely name for the commissioner of the mosaic. 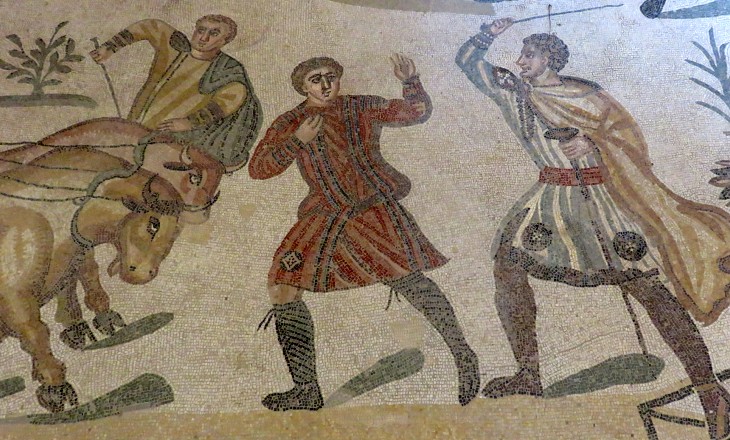 Hall of the Great Hunt: punishment of a subordinate (notice the symbolic way shadows are depicted)

The scene of the mosaic is set in a harbour, presumably of Sicily or of Northern Africa, yet all the people are fully (and elegantly) clothed, something which would be understandable for the ship captain, less so for the workforce involved in manual activities. The man punishing a subordinate is dressed in the style of the military elite of the Late Empire. 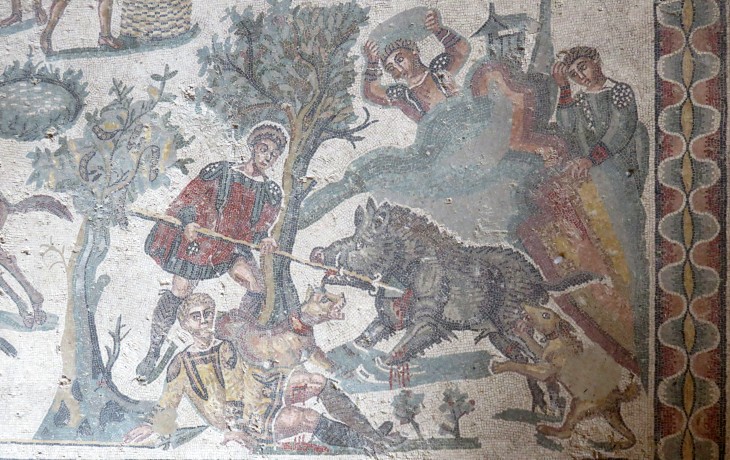 Hall of the Little Hunt: the killing of a boar

Meleager killing the Calydonian Boar was a recurring subject in the reliefs of many fine sarcophagi in Italy and Greece because it allowed for the depiction of a number of young naked warriors. The decoration of Villa del Casale refrained from nudity and the mosaic depicting an event similar to that of Meleager shows a rather chaotic scene in which a master helped by his servants and dogs manages to kill a boar after the beast wounded another hunter. They all wear clothes. The scene is part of a large mosaic with other references to hunting. 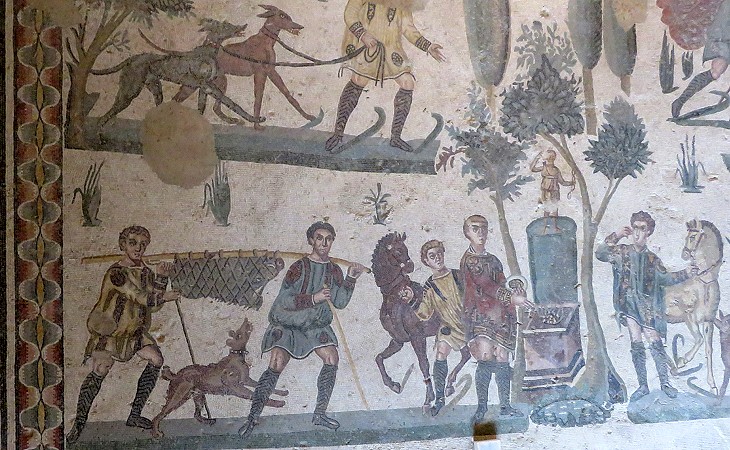 Hall of the Little Hunt: a sacrifice to Diana

The sacrifice to Diana was most likely performed by the same people depicted in the previous scene, at least judging from the colour of their clothes. The scene brings to mind a relief of Arco di Costantino where trees are placed behind a statue of Apollo. We can assume that the man in red performing the sacrifice was the landlord. The Room of the Little Hunt could only be accessed from the Rectangular Peristyle which indicates it had a public use. Maybe its floor mosaic was meant to depict the achievements of the landlord and in particular his saving the life of another hunter.
Comparisons can be made between mosaics of this villa and those found in Uthina in Tunisia. 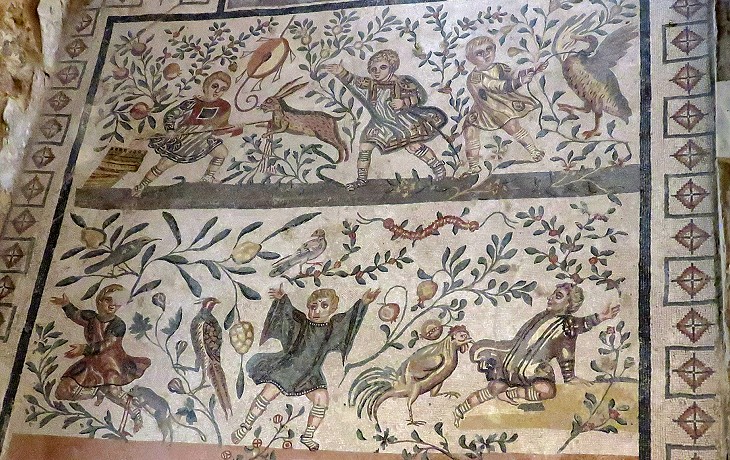 Similar to the chariot race, hunting is depicted as the actual event and as a game for children. The room is in the private apartments and maybe children lived there. It was a very popular subject for the decoration of sarcophagi and mosaics in Roman time (and even during the Renaissance). Often the children or cupids were portrayed inside acanthus scrolls as at Philippopolis. Considering that the landlord of Villa del Casale was the owner of a very large estate, one would expect to see mosaics related to the activities which were carried out there, both the actual ones, as those shown in a mosaic at Caesarea, today's Cherchell in Algeria or depicted as a game for children, as at Hippo Regius. 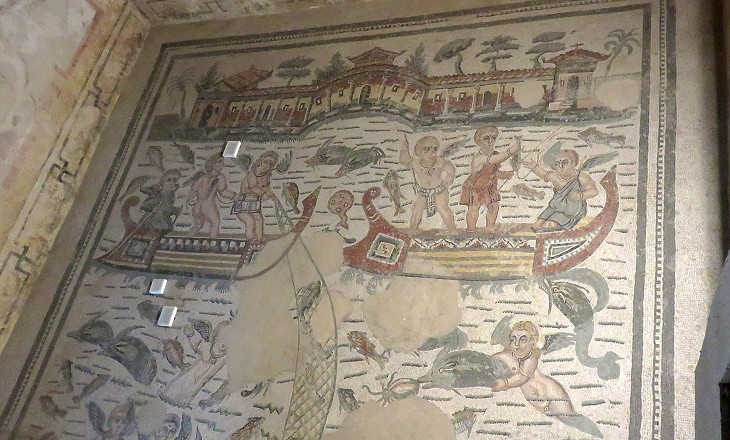 Room of the Fishing Cupids

This mosaic has another very popular subject (you may wish to see a finer similar mosaic from Leptis Magna in today's Libya). Its main interest lies in the depiction of a long colonnade by the sea in the background of the scene. Attempts have been made to associate this building with an actual one, maybe on the shores of Africa, but the prevalent opinion is that it shows an archetypal palace, rather than an actual one. Eventually the Arabs had a liking for these imaginary architectures and they depicted them in the mosaics of the Umayyade Mosque of Damascus. 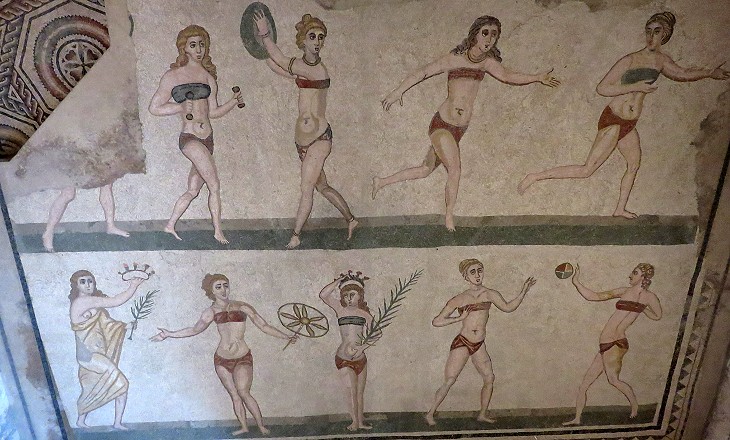 Room of the Bikini Girls

This famous mosaic replaced an earlier one which was based on geometric patterns. When this occurred is not known, but it is unlikely it happened after a long period of time, because the subject of the mosaic (a reference to the Olympic Games) would not have been popular in the Vth century when the Olympic Games were no longer held. The degree of nudity of the girls would have been regarded as outrageous in a society which was moving away from the canons of classical beauty.
In 1982 archaeologist Andrea Carandini made an attempt to explain the conceptual purpose behind the overall mosaic decoration of Villa del Casale. Ulysses freeing himself and his companions from Polyphemus, the capture of wild animals, the myths of Orpheus and Arion, Cupid winning over Pan were all meant to indicate the victory of Mind and Virtue over Chaos and Evil. In this context the mosaic of the girls engaged in athletic activities is a symbol of the achievement by mankind of a greater understanding of the significance of life.
The image used as background for this page shows a detail of this mosaic.

Move to see the mosaics having a geometric pattern or a mythological subject or the buildings of the villa.