- S. Gregorio da Sassola and Casape
(detail of a ceiling at Palazzo Conti at Poli) 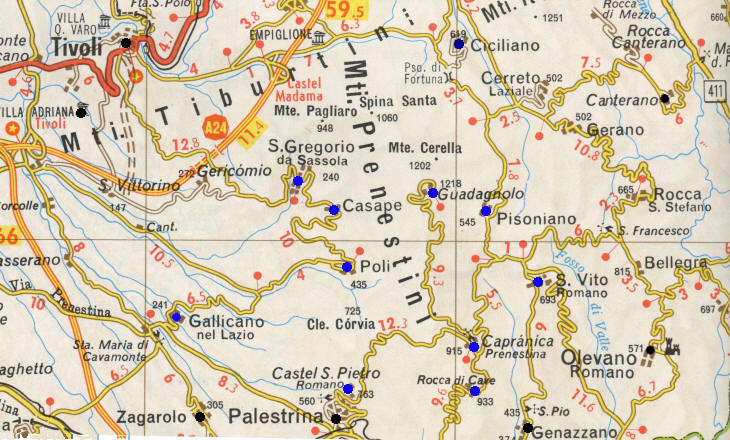 Map of the region between Tivoli and Palestrina: blue dots: towns covered in this section; black dots: Villa Adriana, Tivoli, Zagarolo, Palestrina and Genazzano which are covered in other sections

A range of mountains reaching a height of 1,200 mt/4,000 ft separates the Roman Campagna (the countryside south of Rome) from the upper valley of the River Aniene, the region around Subiaco. The mountains are called Monti Prenestini after Praeneste, the ancient name of Palestrina, which is situated at the southern end of the range. The mountains can be seen from Rome and in the 1765 Grand View of Rome by Giuseppe Vasi at the sections B8 and B9. 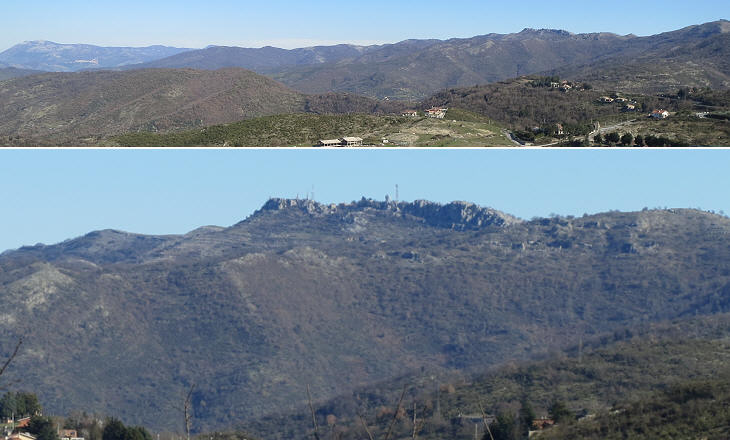 Monti Prenestini do not have peaks that stand out with the exception of Rupe di Guadagnolo, which is more noticeable for its rocks, than for its height. The main settlements are situated on the western side of the mountains and often enjoy commanding views.
The mountains are not crossed by east-west roads linking Campagna Romana with Subiaco. The woods which cover their top were used as a haunt by brigands, especially in the early XIXth century.
Two men suddenly rushed out from the thicket near a little lane to the left and stopped the way and pointing their guns at the factor who was riding a little before me ordered him to dismount. Meantime two others came out of the wood behind me so as to have us between them and the former. We had both dismounted on the first intimation. The two men behind me ordered me to turn back instantly and to walk before them not by the road to Castel Madama, but that to San Gregorio.
Lady Maria Callcott (Maria Graham) - Three Months Passed in the Mountains East of Rome: During the Year 1819. Maria Graham (1785-1842) was a British writer of travel books. Her second husband was Sir Augustus Wall Callcott, a landscape painter. The book quoted in this section was one of her first works and it was based on a summer she spent at Poli. (above) Overall view of the town; the section to the left of the castle is medieval, that to the right is modern and it includes Borgo Pio (late XVIIth century); (below) medieval part

S. Gregorio is the Monti Prenestini town which is closer to Tivoli. It owes its name to St. Gregory the Great who donated its territory to the Benedictine Abbey of Subiaco. Later on S. Gregorio became a possession of the Benedictine monks of S. Andrea al Celio (today a separate chapel of S. Gregorio Magno) who sold it to the Colonna in the XIVth century.
After the annexation of the Papal State by the Kingdom of Italy in 1870 da Sassola was added to the name of the town to distinguish it from five other Italian locations by the same name, on the (wrong) assumption that it stood over the ruins of Saxula, an ancient town. 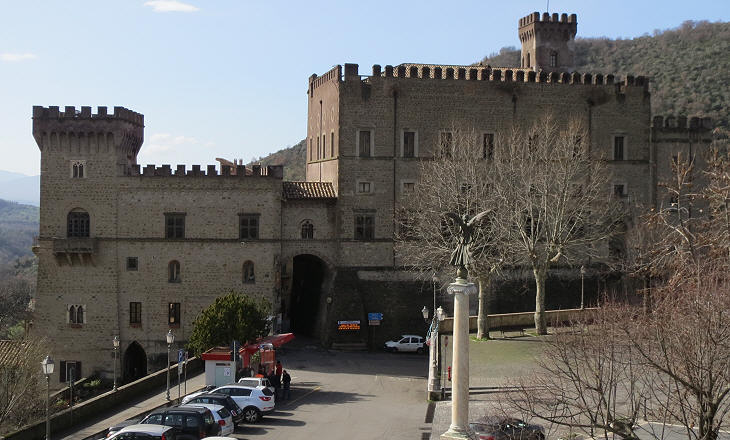 Castello Brancaccio (the medieval part is on the right)

S. Gregorio is situated on a narrow ridge between two ravines and the Colonna built a small castle at its eastern end to protect the only entrance to the settlement. The castle and the town were assigned to the Orsini of Vicovaro in the XVth century and a five-petal rose, their heraldic symbol, can be seen on the façade of the parish church (see the image used as background for this page). 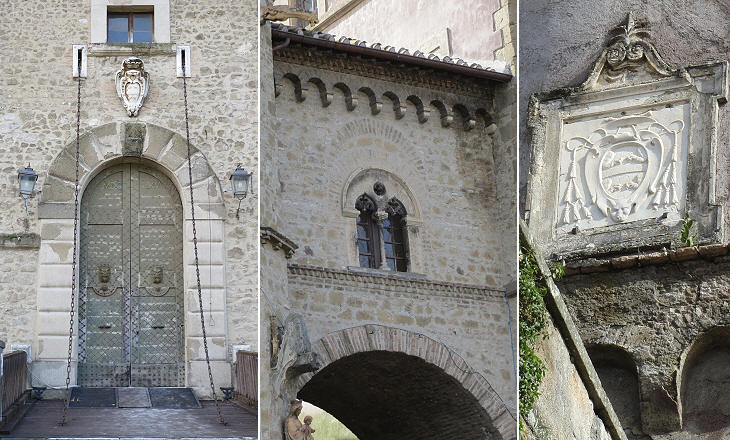 The current aspect of the castle is due to Elizabeth Hickson-Field, a very rich American lady who married Salvatore Brancaccio, a member of a noble Neapolitan family. She bought the castle of S. Gregorio in 1889 and in the following years, battlements, towers, medieval and Renaissance windows, coats of arms of the Brancaccio and an entire new wing were added to the old building to make it more picturesque. 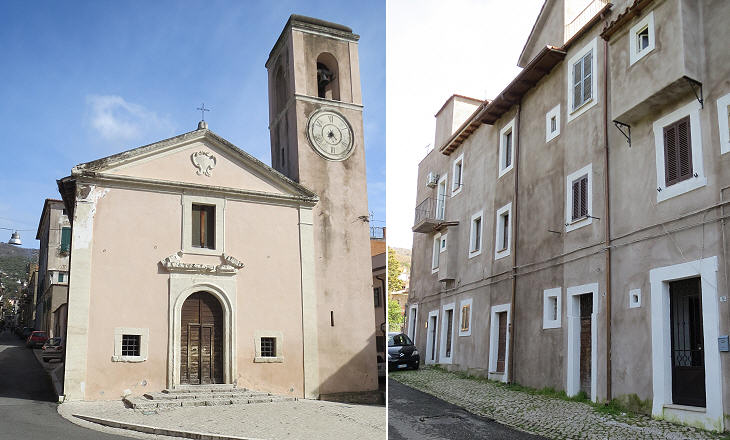 In 1656 a major pestilence struck the Kingdom of Naples and eventually reached Rome and its countryside. At Arsoli, a town not far from S. Gregorio nearly 80% of the inhabitants died. Although the exact causes of the pestilence were not known the fact that most of the population lived in crammed buildings was blamed for increasing the impact of the epidemic. Cardinal Carlo Pio di Savoia who had just acquired the fiefdom of S. Gregorio offered new settlers lodgings in a "new town" built to the east of the old one. S. Sebastiano, an existing small church, was redesigned for the inhabitants of Borgo Pio, as the new settlement was named (you may wish to see Palazzo Pio in Rome). 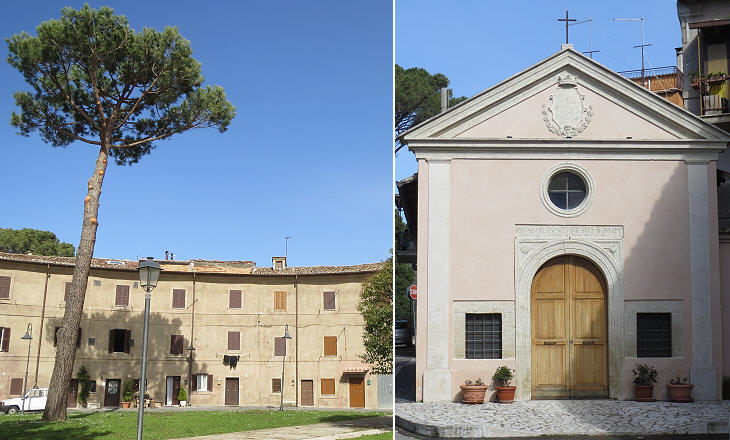 The main street of Borgo Pio ended at a circular (unfinished) square which is known as Piazza Padella (frying pan) because of its shape, similar to that of Piazza S. Pietro which was being completed in the same period.
S. Maria della Cavata is a rural church close to Piazza Padella; the name in today's Italian ought to be della Scavata, because the image of Mary it houses was found during excavations (It. scavi). It has a Renaissance portal and it was embellished with a later stucco decoration and a now erased coat of arms. In the old part of S. Gregorio 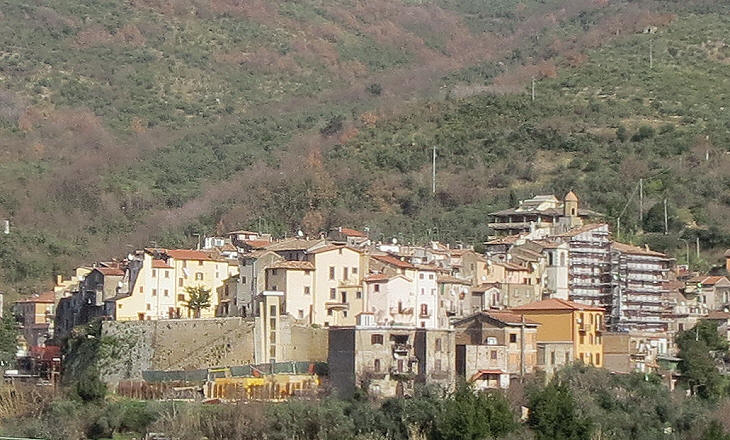 Casape is a very small settlement and it was not regarded as a separate fiefdom, but it was usually included into that of S. Gregorio. The name of the settlement has the root casa (house) which means it was just a group of houses, so Casape could mean Casa Pio with reference to Cardinal Pio or Casa (delle) Api with reference to the bees (It. Api) of the heraldic symbol of the Barberini, the family of Pope Urban VIII, who acquired Palestrina and other nearby fiefdoms in the XVIIth century. At the time of my visit (February 2014) the castle which controlled the access to the tiny town was in a precarious condition and it was surrounded by scaffoldings. (left) The main and only street inside the old town; (centre) clock on the bell tower of the former parish church, which indicated the Italian Hour; (right) round tower at the end of the town