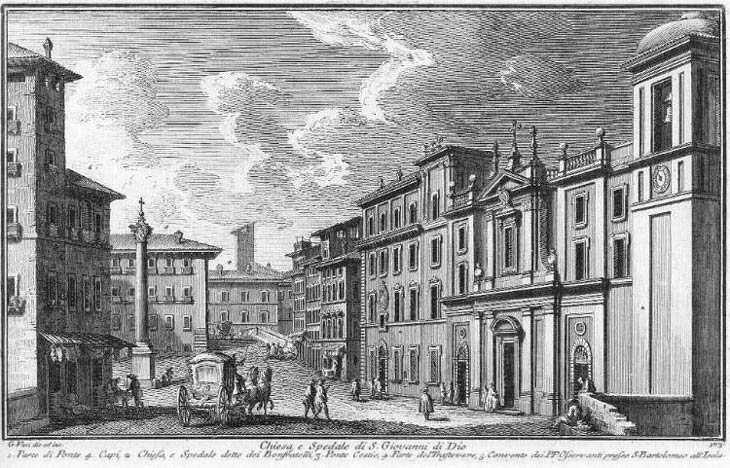 The first book of etchings by Giuseppe Vasi was published in the early 1740s and it was dedicated to views of the River Tiber, but in 1758 when Vasi depicted Spedale di S. Giovanni di Dio his interest in landscape views had subsided and in this plate it is difficult to understand that the hospital is located on Isola Tiberina, although the view was taken from Ponte Quattro Capi (green dot in the 1748 small map below).
In the description below the plate Vasi made reference to: 1) Ponte Quattro Capi; 2) Spedale di S. Giovanni di Dio o de' Bonfratelli (Fatebenefratelli) e Chiesa di S. Giovanni Calibita; 3) Ponte Cestio; 4) Part of Trastevere; 5) Parts of the Monastery adjoining S. Bartolomeo all'Isola. 1), 3) and 5) are shown in other pages. The map shows also 6) S. Benedetto in Piscinula; 7) Casa di Sir John Leslie. 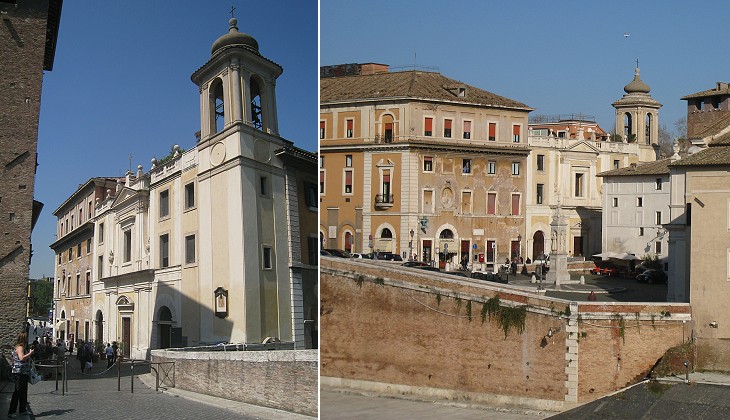 (left) The view in January 2010; (right) the view from Trastevere showing the main changes made during the XIXth century

The side of Isola Tiberina near Ponte Quattro Capi was not greatly impacted by the changes made at the end of the XIXth century to prevent floods, while the buildings near Ponte Cestio were pulled down to enlarge the river bed. 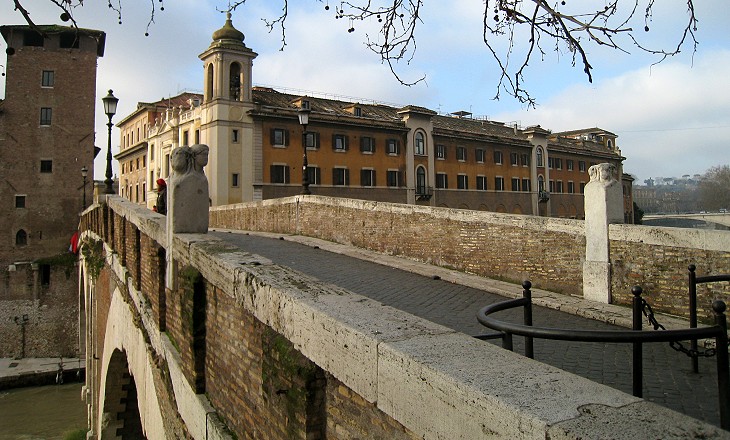 In 1930-1934 the hospital was almost entirely redesigned by Cesare Bazzani, who however did not modify its XVIIIth century aspect along the street which crosses Isola Tiberina. The bell tower of S. Giovanni Calibita was rebuilt in line with the plate by Vasi. 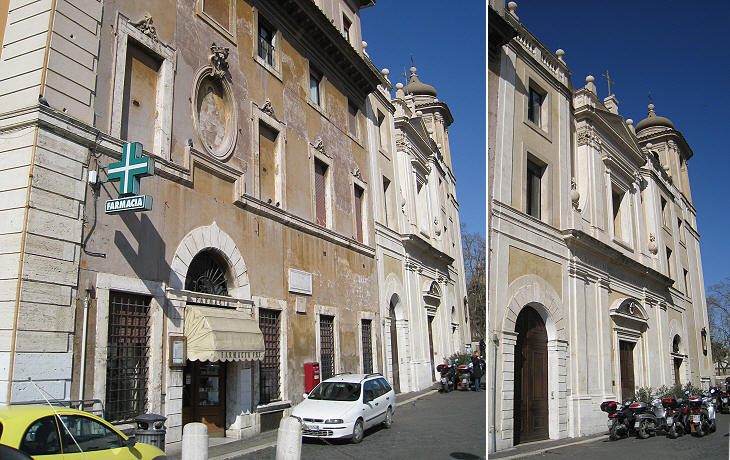 Isola Tiberina was the site of a temple/shrine to Asclepius, Greek god of Medicine, so the foundation of Spedale di S. Giovanni di Dio in 1584 suited the ancient function of the island.
The hospital was named after St. John of God, a XVIth century Portuguese friar who founded the order of the Brothers Hospitallers, who in Italy are better known as Fatebenefratelli (Do-Good Brothers). St. John of God founded his hospital at Granada, in southern Spain, where he spent most of his life. The symbol of his order is a pomegranate with reference to that town (you may wish to see a detail of the church dedicated to St. John of God at Granada - it opens in another window). The image used as background for this page shows a stone pomegranate on the façade of S. Giovanni Calibita, the church adjoining the hospital.
The façades of the hospital and of the church were modified in 1711 by Romano Carapecchia, an architect who is best known for the second part of his career on Malta. 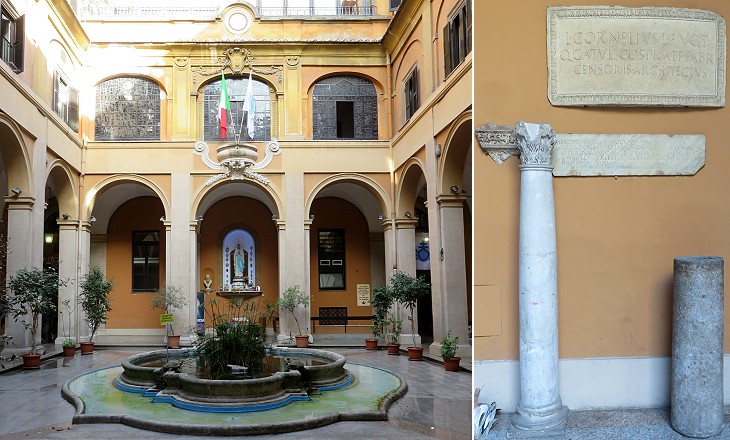 The layout of the hospital was redesigned in the 1930s, but a courtyard on the back of the church matches that shown in the 1748 map. It retains elements of its XVIIIth century stucco decoration. It houses some ancient columns and inscriptions which were found in the XIXth/XXth centuries. A large and fine inscription refers to L. Cornelius as an architectus. He most likely was involved in the design of Tabularium. 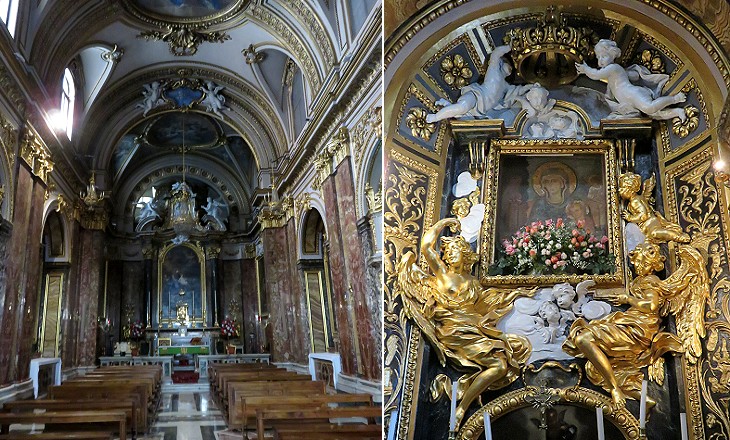 (left) Interior of the church; (right) XVIIIth century altar of "Madonna della Lampada", a sacred image which stood outside the church. In 1577 when a flood covered Isola Tiberina its lamp continued to burn under the water. A modern copy of the image can be seen on the base of the bell tower

The church was already recorded in the XIth century. It is dedicated to St. John Kalybite, a Vth century saint from Constantinople who lived as a hermit and then spent his last years in a hut (kalybe in Greek) near the mansion of his rich parents, but concealing his true identity, an account very similar to that of St. Alexius. The relics of the saint were found beneath an altar. The church was rebuilt in 1640 and then lavishly decorated with works of art making reference to both St. John of God and St. John Kalybite. 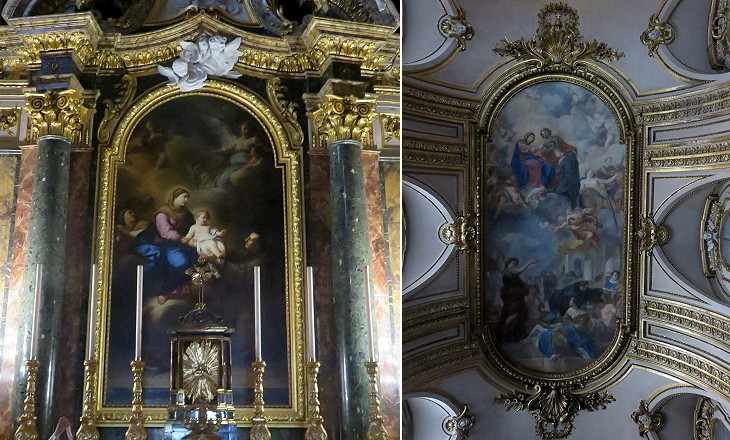 (left) Main altar: The Virgin Mary shows the Child to St. John of God by Andrea Gennaroli (1640) with additions by Corrado Giaquinto; (right) Glory of St. John of God by Giaquinto (1742). This painter who started his career in Naples refrained from the illusionistic features which characterized many Roman ceilings; see other of his paintings at S. Nicola dei Lorenesi and S. Croce in Gerusalemme 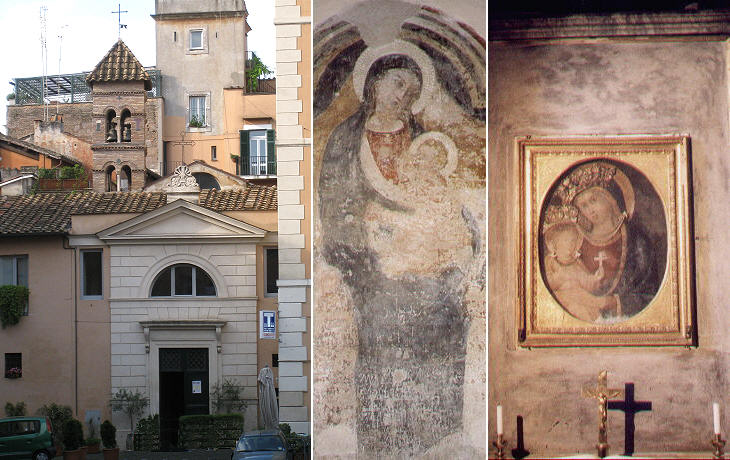 According to tradition St. Benedict, the founder of western monasticism who lived as a hermit at Subiaco belonged to gens Anicia, an important family of the late Roman Empire whose houses were in Trastevere in the site where this church was built in the early XIIth century. S. Benedetto in Piscinula probably had a portico which was turned into an atrium in the XVIIIth century. The reference in Piscinula is unclear, perhaps the fish market of S. Angelo in Pescheria was in origin located in this part of Trastevere or the church was near a hall of ancient baths (It. piscina means pool and It. pesce means fish). In 1844 the façade was redesigned by Pietro Camporese the Younger: it is very similar to that of S. Pantaleo. Camporese is best known for having redesigned Palazzo del Vicegerente. 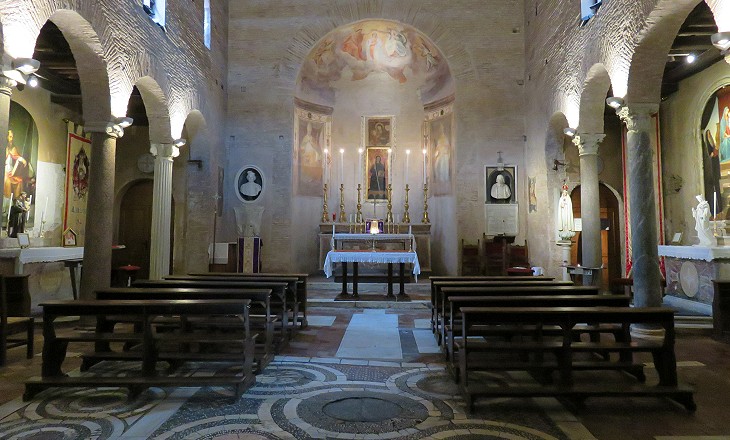 The current aspect of the church is mainly due to a 1939 restoration which highlighted the medieval structures of the building. It was divided into three naves by eight ancient columns of different stones and size and with different capitals. 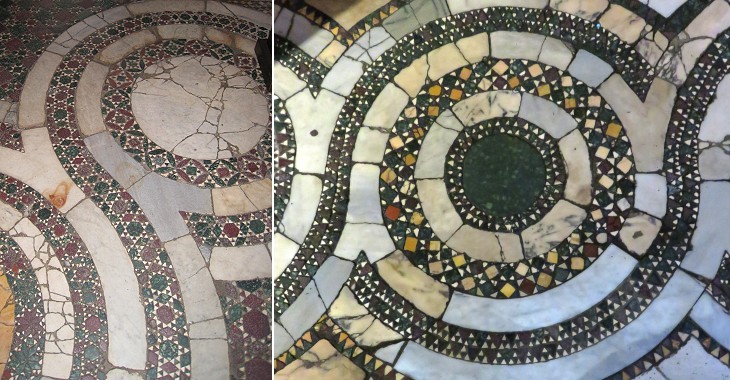 Cosmati decoration of the floor

The church retains one of the finest Cosmati floor of Rome. One can notice small irregularities in the way pieces are combined together. These have been removed from other Cosmati floors which were overly restored (e.g. at S. Maria in Cosmedin). 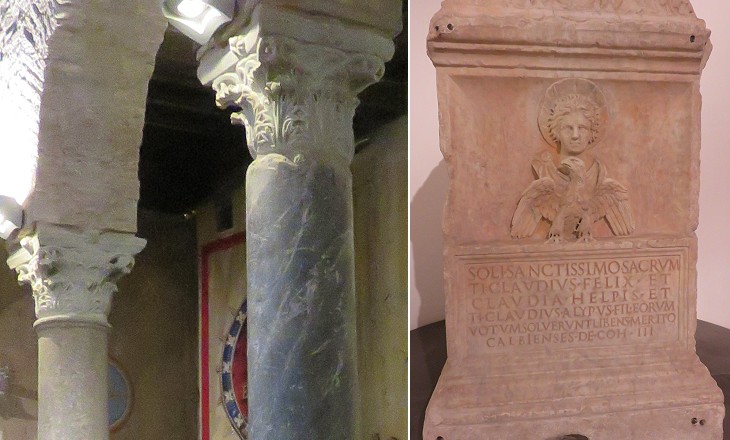 (left) Ancient capitals; (right) Musei Capitolini: altar to "Soli Sanctissimo" (the Most Holy Sun) with a Palmyrene inscription on the left side (not visible) found near S. Benedetto in Piscinula (see a another relief portraying the sun in a similar way)

The coat of arms of the owner of this finely restored old house near S. Benedetto in Piscinula, would puzzle even an expert in genealogy and heraldry of the Roman families. The meaning of the horses and of the three buckles requires a visit to Castle Leslie in the Republic of Ireland. The following is an excerpt from a previous edition of the family website:
"The Leslies can trace their ancestry back to Attila The Hun. Bartholomew Leslie was the chamberlain and protector of Margaret Queen Of Scotland. It is through him that the family motto Grip Fast originated. While fleeing enemies Queen Margaret rode pillion on the back of Bartholomew's horse. When fording a river the queen fell off, Bartholomew threw her the end of his belt and told her to grip fast the buckle. He saved the Queen's life & from that day forward she bestowed the motto Grip Fast on the Leslies.
The first Leslie to come to Ireland was Bishop John Leslie who was Bishop of the Isles of Scotland. In 1665 Glaslough Castle and Demesne was sold by Sir Thomas Ridgeway to the Bishop of Clogher John Leslie. (..) The poetic Sir Shane transferred the property to his eldest son John Norman Leslie who became the 4th Baronet. Owing to ill health from five years in a prisoner of war camp he made the estate over to his sister Anita and lived the next 40 years in Rome until his return home to Castle Leslie in 1994."
Sir John Leslie embellished his Roman residence by adding a modern madonnella. He passed away in April 2016.