(left) Old houses cut into the volcanic rock; (centre) gate of Bassano beneath Palazzo Giustiniani; (right) the main street of the town

Bassano was probably founded in the XIth century by inhabitants of Sutri and after the 1870 annexation of the Papal State to the Kingdom of Italy and until 1964 its official name was Bassano di Sutri (today it is Bassano Romano). In the XIIth century it became a minor fiefdom of the Anguillara, a family who controlled most of the territory around Lake Bracciano.
In 1595 Bassano was bought by Vincenzo Giustiniani. The Giustiniani were a very wealthy Genoese family who ruled over the island of Scio (Chios) in the Aegean Sea from 1347 to 1566, when they were ousted by the Ottomans. Giuseppe Giustiniani, the father of Vincenzo, settled in Rome and bought a palace there. His son decided he needed a fiefdom in order to be admitted into the Roman aristocracy (the Giustiniani had a mercantile background).
The Giustiniani gave a Renaissance appearance to their new acquisition, by levelling the surface of the volcanic rock upon which Bassano rests and by opening into it a gate leading to their palace and to the town. The main street is still dedicated to a charitable member of the family. 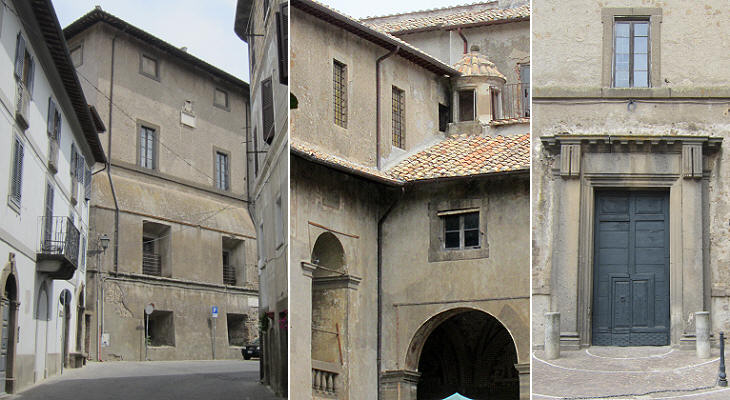 Palazzo Giustiniani: (left) rear side resembling a fortress; (centre) detail of the main courtyard with traces of frescoes and lantern of the chapel; (right) main portal

The Giustiniani were admitted into the Roman aristocracy by Pope Paul V who gave them the title of Marquises of Bassano in 1605. Pope Innocent X, whose niece married a Giustiniani, improved their status by appointing them Princes of Bassano.
The Giustiniani established links with the most important Roman families through marriages. In 1777 Caterina Giustiniani married Baldassarre Odescalchi, a member of the family of Pope Innocent XI, and the Odescalchi inherited the title of Princes of Bassano in the XIXth century. This family however did not care much about their palace at Bassano, probably because they already had a castle/palace in a better location at Bracciano which is not far away.

Vincenzo Giustiani built a large palace which was linked by a bridge to a garden with a small casino. The building included a chapel and a small theatre and it was decorated with frescoes. After a long period of abandonment in 2003 it was acquired by the Italian State, but its restoration has not been completed yet.
In 1703 the Giustiniani promoted the enlargement and renovation of the parish church near their palace.

Four ancient busts (heads of the IInd century AD) at the sides of the portal of Palazzo Giustiniani. The head of the first bust was stolen in March 2012

Vincenzo Giustiniani was a great and competent collector of works of art and not only of ancient sculptures as he bought 15 paintings by Caravaggio. Giustiniani published a detailed and illustrated catalog of his own collection (Galleria Giustiniana - 1631): its two volumes document more than 300 sculptures, reliefs and paintings and they include a view of the gardens at Bassano. This explains why the main square of Bassano is decorated with four busts, although not very representative of the collection. Most of the works of art collected by Vincenzo Giustiniani were bought in 1826 by the King of Prussia and can be seen in Berlin. 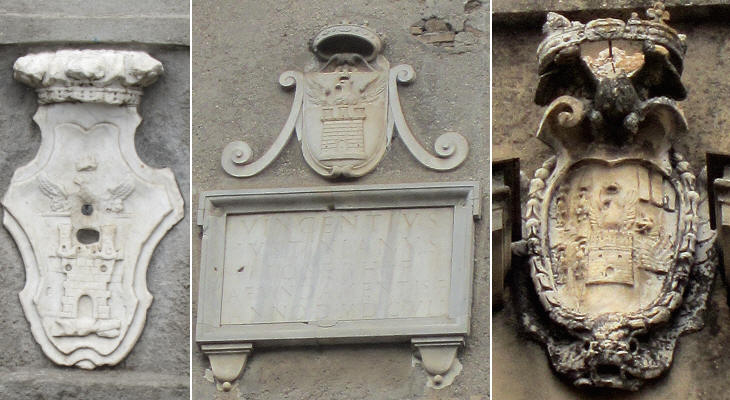 Coats of arms of the Giustiniani: (left) on the bridge they built to facilitate the access to Bassano; (centre) on the rear side of their palace with an inscription celebrating the completion of the gardens in 1605 (Vincentius Iustinianus Josephi F. Hortos e regione pretoria cultu magnifico adiecit A.D. MDCV); (right) on S. Maria Assunta between those of the Gonzaga, the family of the Dukes of Mantua (left - in 1661 Carlo Benedetto Giustiniani married Caterina Gonzaga) and of the Boncompagni Ludovisi, the families of Pope Gregory XIII and Pope Gregory XV (right - in 1706 Vincenzo III Giustiniani married Costanza Boncompagni Ludovisi)

The volcanic pond of Monterosi aka Lake Janula, after Janus, a Roman god

The main crater of an extinct volcano formed Lake Bracciano. Several minor craters created shallow ponds which were subsequently drained to reclaim their land, but not that at the junction between Via Cassia and the roads to Ronciglione and Nepi, near the tiny town of Monterosi. 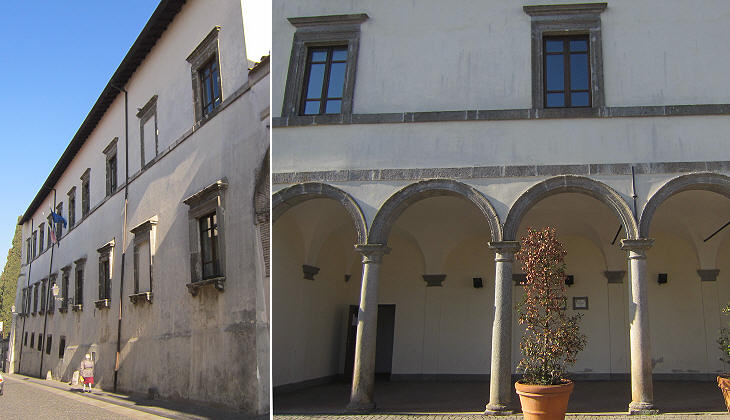 Views of the Altieri/Del Drago palace, a former monastery

Monterosi is situated 23 miles north of Rome and it was mentioned in several XIXth century guide books the last stopping place prior to entering Rome. This however applied to those who travelled on foot because the carriages carrying Charles Dickens in 1844 and Ferdinand Gregorovius in 1852 left Ronciglione early in the morning, reached Monterosi at midday and entered Porta del Popolo in the afternoon. In that period Monterosi was stricken by malaria and foreign travellers would have been surprised to know that in the XVIIth century the Altieri, the family of Pope Clement X, had tried to turn the small village into a modern town (as they had done with more success at Oriolo on the opposite side of Lake Bracciano). 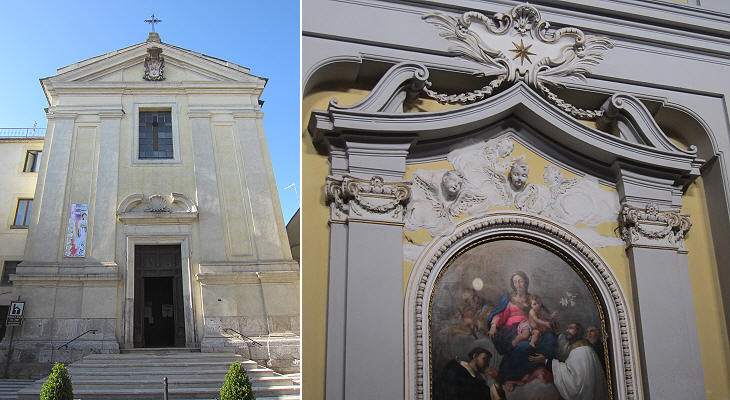 The main church of Monterosi was renovated by Cardinal Lorenzo Altieri (his coat of arms can be seen in the image used as background for this page). Some sources attribute the design of the church and of the family palace to Giovanni Battista Contini. The eight-pointed stars which decorate the interior are a reference to the heraldic symbol of the Altieri. 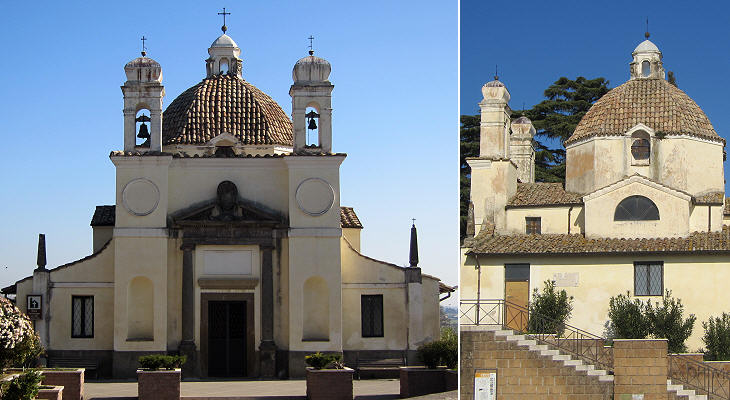 This church was built very near Via Cassia, probably as a chapel for pilgrims. Notwithstanding its small size it has all the features of a Late Renaissance Roman church. 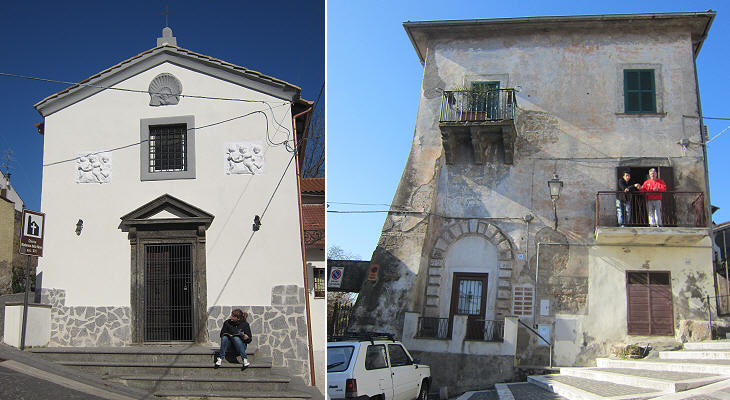 Borgo Aldobrandino: (left) Madonna della Neve; (right) what the owners (wrongly) claim to be the oldest house of Monterosi

The part of Monterosi which is located on higher ground is known as Borgo Aldobrandino, because it was developed by the family of Pope Clement VIII Aldobrandini. Madonna della Neve was adjoined by a small hostel for pilgrims so it was probably built for the 1600 Jubilee Year.
The 1871 census recorded a population of 867 inhabitants at Monterosi, but today, thanks to an upgrading of Via Cassia, the small town is considered within commuting distance from Rome and its population has grown considerably.