You may wish to see a map showing the towns covered in this section first.

Livy called Sutri and Nepi Claustra Etruriae (Gates of Etruria) because of their strategic position from a military point of view. By holding them the Romans could advance into Etruscan territory and at the same time prevent the enemy from attacking Rome. Walls built in 1540 after the town was assigned by Pope Paul III to his son Pier Luigi Farnese, Duke of Castro

Nepi is located on a terrace between two deep ravines, so it just needed a short stretch of walls to become an impregnable fortress. The walls designed by Antonio da Sangallo the Younger, the architect of the Farnese, are situated very near the foundations of those built by the Etruscans in the Vth century BC.
Nepi was conquered by the Romans in 380 BC. After the destruction of Falerium (Civita Castellana) at the end of the First Punic War, the town acquired importance and in 88 BC its inhabitants were granted Roman citizenship.
Nepi declined in the VIth century AD when it was affected by the Greek-Gothic War and it was plundered by the Longobards. This caused the disappearance of its ancient monuments. 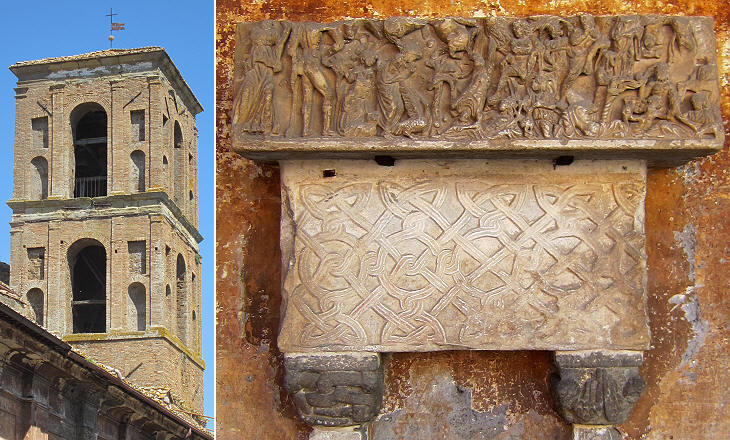 Cathedral: (left) XVIth century bell tower; (right) a Roman sarcophagus portraying the fall of Phaeton and a section of the medieval choir screen in the porch of the church

Records indicate that during the Xth century Nepi was again a town of some importance. In the XIIth century, similar to other towns of the region, it became an independent township.
Nepi was the seat of a diocese and in 1180 a large cathedral was built on the site of a previous medieval church. Unfortunately almost all of the original building was destroyed in 1798 when French troops set it on fire. 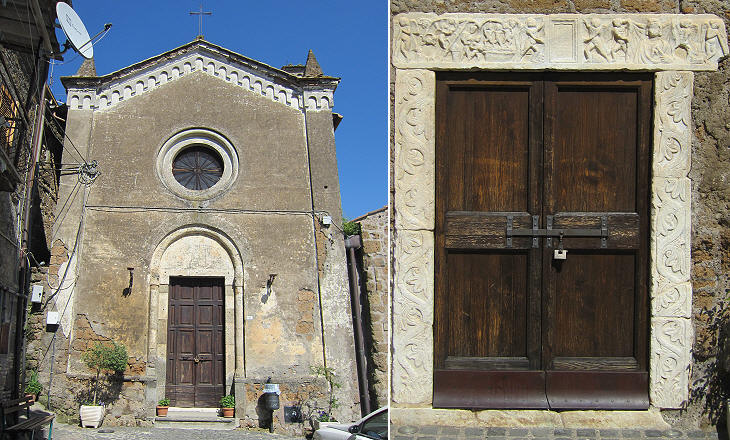 The Cathedral and other medieval churches were embellished with fragments of ancient Roman buildings and sarcophagi. The lintel of the portal of S. Biagio is a small Late Empire sarcophagus whereas the side pillars are a medieval work, although based on ancient patterns.

Musei Capitolini: sarcophagus from S. Biagio which was donated by Pope Benedict XIV in 1740; it depicts the education of Dionysus/Bacchus (IInd century AD)

A sarcophagus with Bacchus consigned to the care of his grandmother Ino and also when adored after having planted the vine. In the centre is a curious Bacchic sport, in which the actor had to jump upon a swollen oiled skin while old Silenus is belabouring an unlucky wight, who has been sprawling on the ground.
Rev. Jeremiah Donovan - Rome Ancient and Modern - 1842 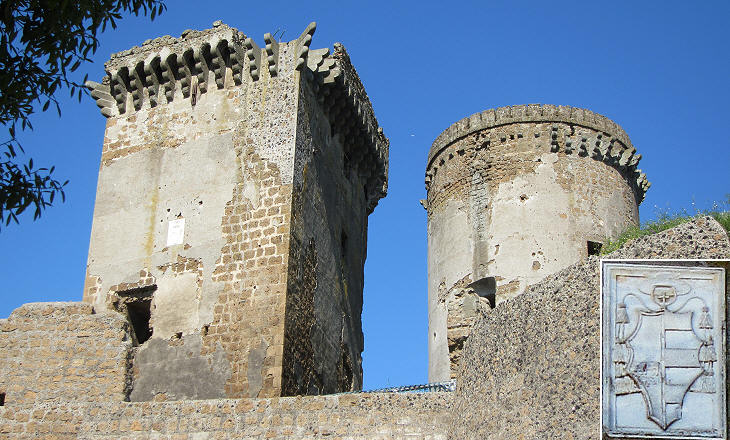 Towers of the Borgia fortress; (inset) coat of arms of Cardinal Rodrigo Borgia

One of the first decisions of Pope Calixtus III was to create his nephew Rodrigo Borgia cardinal and to appoint him generalissimo of the papal troops. In this capacity Cardinal Borgia associated his name with the construction of a series of fortresses, such as those at Soriano and at Subiaco. At Nepi he built a fortress which was eventually incorporated into the Farnese fortifications. In 1492 Cardinal Borgia was elected Pope Alexander VI and in 1499 he assigned Nepi to his daughter Lucrezia, who spent many months there during her second widowhood. 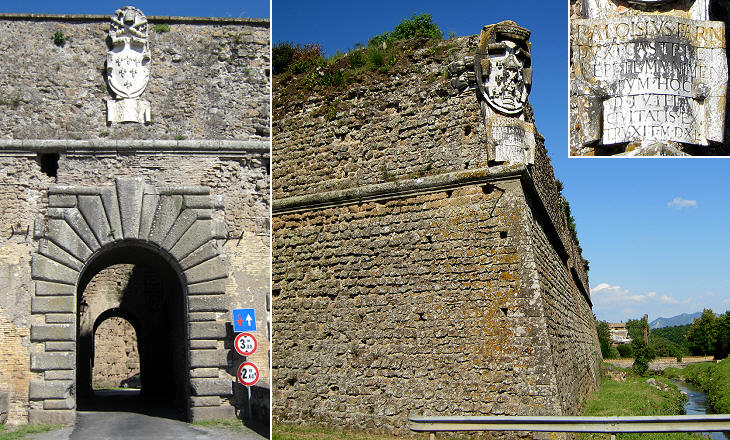 In 1545 in the frame of the negotiations for the assignment of Parma to Pier Luigi Farnese, Pope Paul III returned Nepi to the direct authority of the Papal State, so the town was a Farnese fiefdom for only a very short period of time. 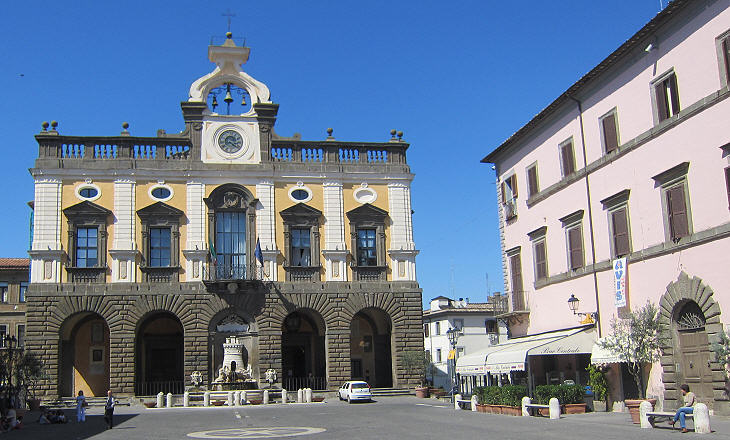 The Farnese commissioned Sangallo with the construction of a palace, as they had done in many other towns (see that at Gradoli) which was unfinished when they left Nepi. It was turned into the town hall and it was completed in the early XVIIIth century. 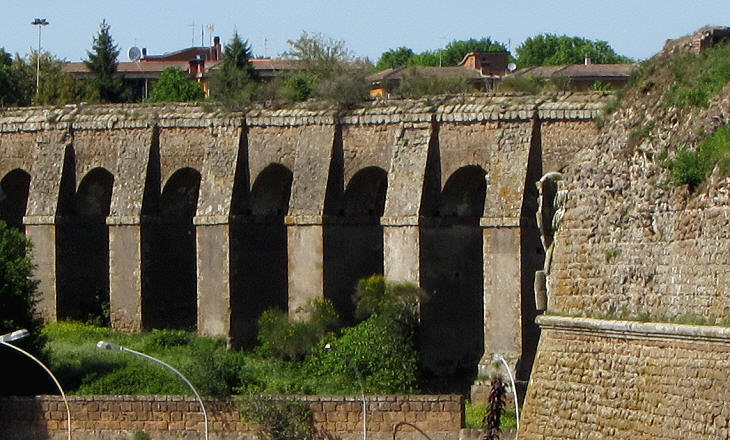 Acqua di Nepi is a natural sparkling water which is very popular in the restaurants of Rome. The springs near Nepi were renowned in antiquity and their water was captured and reached the town; some believe that Nepet, the Etruscan name of Nepi, meant water. In 1727 a two mile long aqueduct was completed and a large fountain was designed by Filippo Barigioni at the centre of Palazzo Comunale. 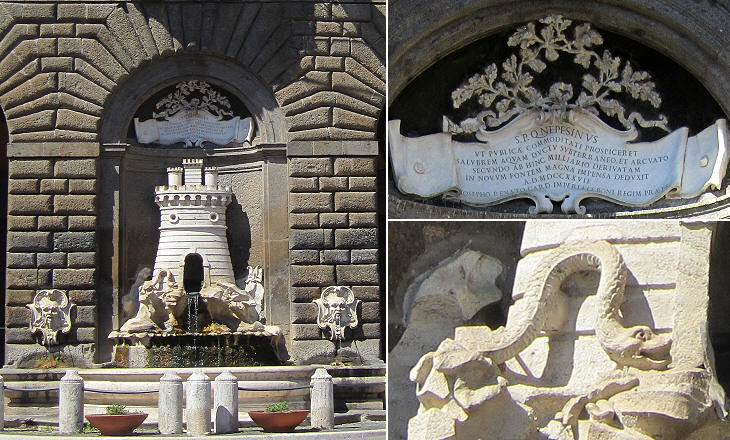 The construction of the aqueduct and of the fountain was promoted by Cardinal Renato Imperiali who did the same at other locations such as Corneto and Montalto di Castro. The tower and the snakes which are depicted in the fountain are a reference to the coat of arms of Nepi and to that of Benedict XIII, the reigning pope. 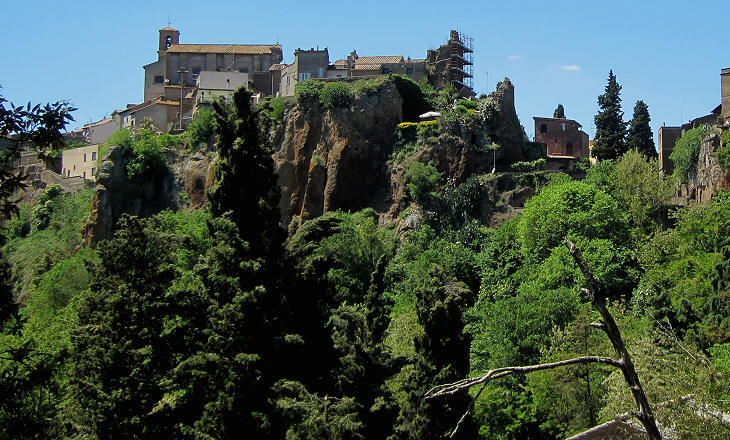 Castel Sant'Elia was built during the Middle Ages on a very small terrace perched on the edge of a deep ravine near Nepi. The reference to Prophet Elijah is probably due to the fact that the terrace seemed a likely location from which Elijah could ride his fiery chariot to Heaven. 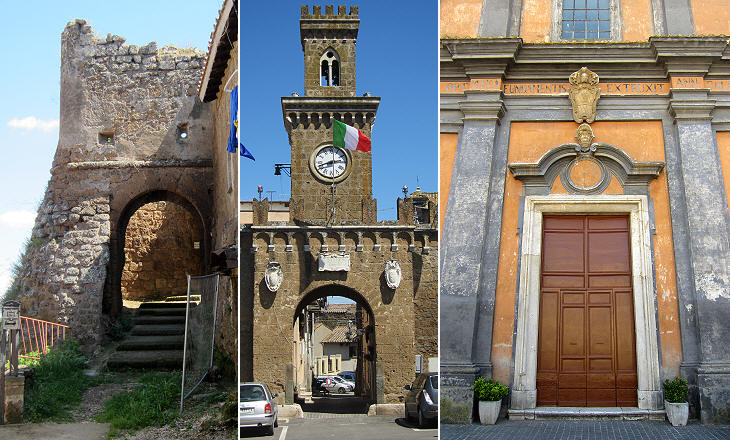 (left) Entrance to the older part of the town; (centre) restored gate of the new walls; (right) S. Antonio Abate

The small medieval settlement was a property of Spedale di S. Spirito in Sassia for many centuries until it was acquired by the Farnese, who included it in the Duchy of Ronciglione. The Farnese promoted the development of Castel Sant'Elia and new walls marked the enlarged extent of the settlement. In the second half of the XVIIth century the small town returned under the direct rule of the Papal State. The parish church was rebuilt in 1737 during the pontificate of Pope Clement XII. 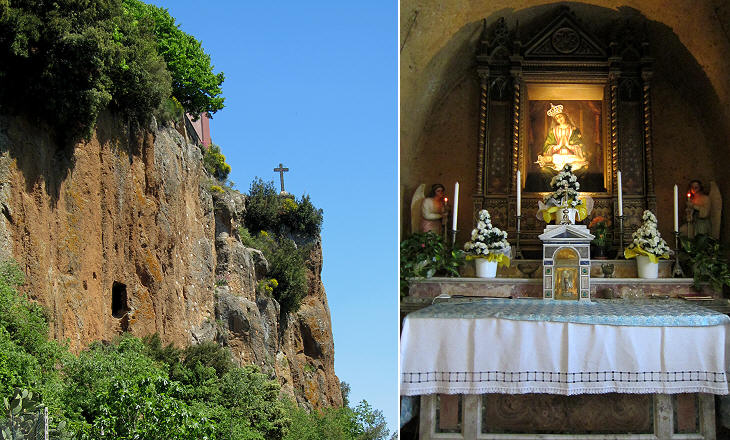 In the VIth century Benedictine hermits lived in caves cut into the rock near Castel Sant'Elia. According to tradition Pope Gregory the Great met Queen Teodolinda, wife of two consecutive Longobard kings, in a church of these hermits.
In 1777 Fra Giuseppe Rodio, a Franciscan monk, decided to live as a hermit in one of the caves. In 14 years he cut 144 steps into the rock to allow pilgrims to visit the chapel of his cave which was dedicated to Madonna ad Rupes (Our Lady of the Rocks). 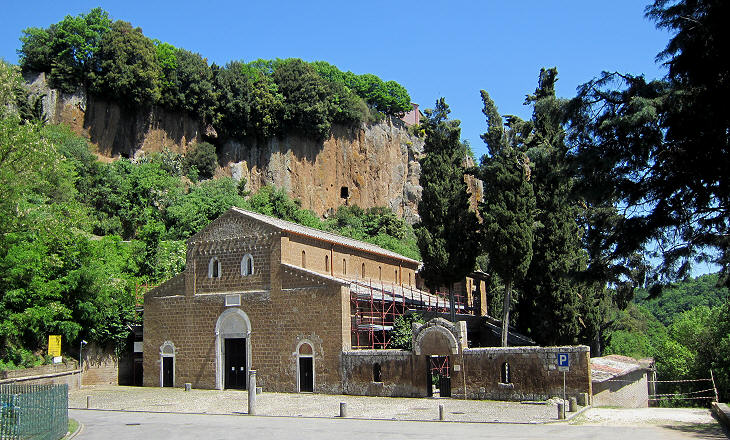 The ravine beneath Castels Sant'Elia was regarded as a holy site from the time of the Etruscans. The Romans built a temple to Diana on a small terrace at the foot of the rock. The Benedictines built a church there in the VIth century. It was renovated in the VIIIth century and it was entirely rebuilt in the XIth century. The church is dedicated to St. Anastasius of Suppentonia (the Latin name of the ravine) who was the first abbot of the Benedictines. The church was built using columns and capitals of ancient buildings. The floor and the altar show early examples of Cosmati decoration. The marble chair is thought to come from the older church. After the Farnese left Castel Sant'Elia the church was not properly maintained. In the late 1960s the building was thoroughly restored and the roof was entirely replaced. Details of the portals: (above) central portal: the relief shows a series of animals having at the centre a winged creature; the two ram heads are a Christian symbol; (below-left) left portal with two peacocks (symbol of Resurrection) eating grapes (symbol of Eucharist); (below-right) right portal with a XVIth century fresco in a medieval frame

The decoration of the portals is mainly medieval although some ancient marbles were utilized. The left portal was decorated with fragments of the choir screen of the old church. 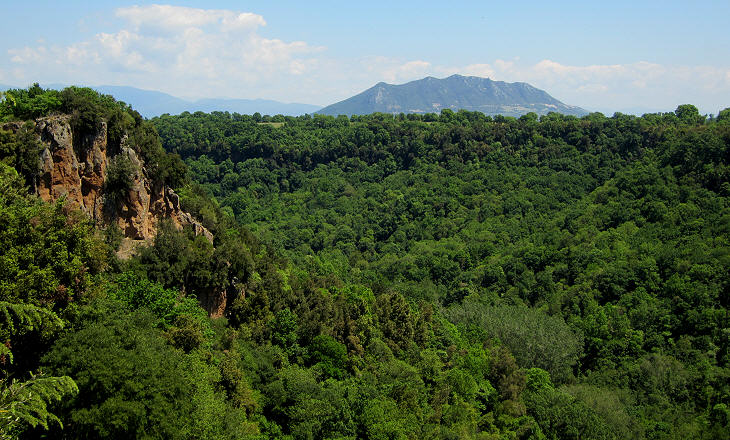 View of the ravine and of Monte Soratte from Castel Sant'Elia