At the beginning of the XVIIth century the popes still hoped that the Roman Church would return to be catholic, i.e. universal, but at the end of the century these hopes definitely faded away; the efforts made to embellish S. Pietro were successful from an artistic viewpoint, but failed in making it the religious centre of all Christians. 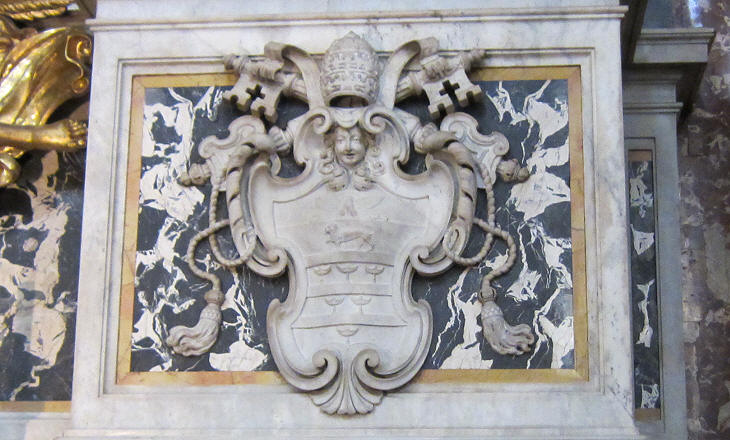 Pope Innocent XI had to tackle the financial crisis he inherited from his predecessors and he did not embark into any major building program; one of the few coats of arms of his pontificate was placed by the Jesuits to celebrate the completion of an altar in il Gesù; it is very similar to those designed by Bernini for the Canopy of S. Pietro. The coat of arms on the Pope's monument in S. Pietro can be seen in an etching by Filippo Juvarra. The many heraldic symbols of the Odescalchi were utilized for the decoration of the Monument to Maria Flaminia Chigi Odescalchi in S. Maria del Popolo. 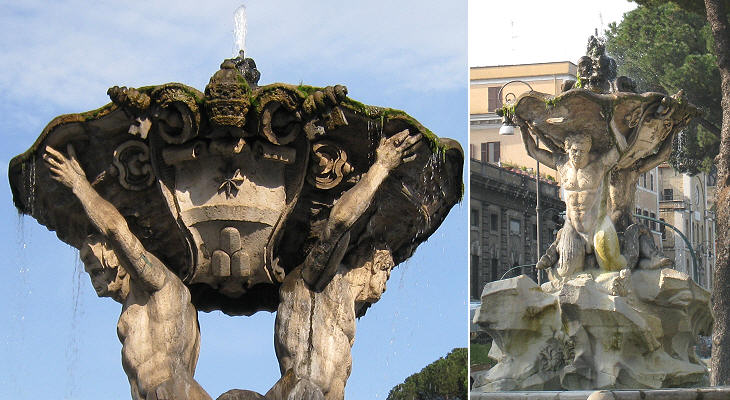 Barocchetto is the term Italian art historians utilize for defining an artistic revival in Rome between 1710 and 1740 which was very much based on the patterns established in the previous century, as this fountain shows; shells, tritons, rocks were all elements of fountains designed by Gian Lorenzo Bernini. Pope Clement XI placed a gigantic coat of arms in Cortile della Pigna which was designed by Francesco Fontana; it is a coat of arms supported by wings, but also this design was already developed by Francesco Borromini in S. Giovanni in Laterano and by Bernini in the Monument to Pope Alexander VII.
You may wish to see an unusual church in Ascoli Piceno with a fine coat of arms of Pope Clement XI or other coats of arms in Urbino, his hometown or an etching by Filippo Juvarra showing his coat of arms in SS. Apostoli. 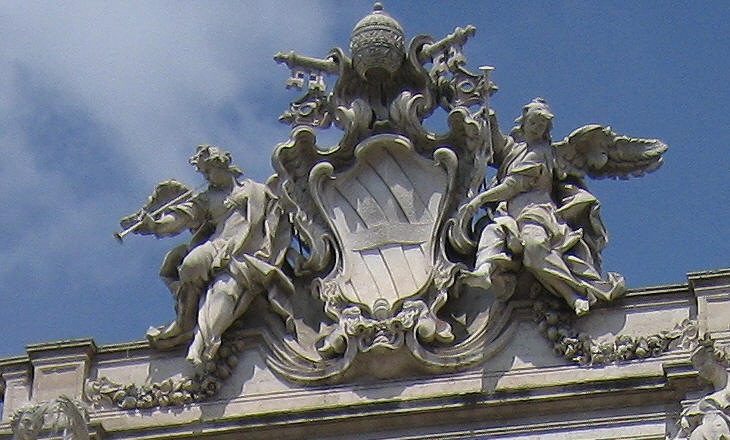 This coat of arms is among the most impressive ones because of its size and design; it is placed between two Fames which announce the achievements of the Pope; Paolo Benaglia designed a similar coat of arms of Pope Clement XII at Palazzo della Consulta; in both cases the coats of arms did not celebrate the completion of a religious building; when Pope Clement XII endorsed the project for the new façade of S. Giovanni in Laterano he preferred to have his coats of arms placed in a low key position. You may wish to see a page with more coats of arms of this pope. 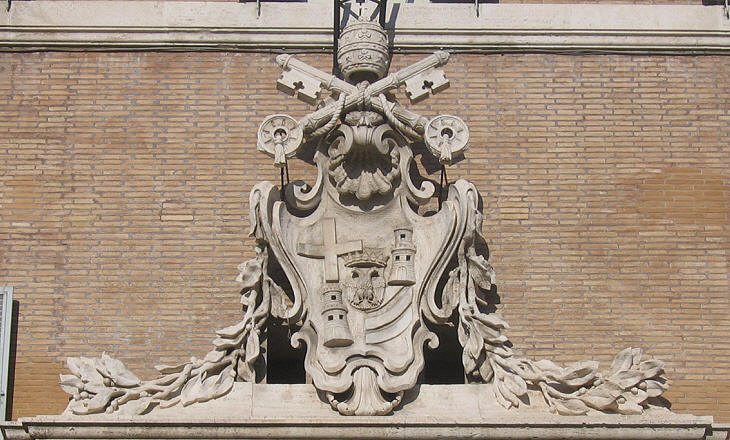 This imposing coat of arms celebrates the opening of a new entrance to the bakery (panetteria) of Palazzo del Quirinale and some works at the foundation of this building; it is somewhat excessive in relation to the achievement it celebrates; in the second half of the XVIIIth century the art in the Papal State oscillated between the repetition of patterns developed in the previous century and the first attempts to move away from them; Pope Clement XIV and Pope Pius VI filled Museo Pio-Clementino (a section of today's Musei Vaticani) with many of their coats of arms and decorated it with their heraldic symbols; the image you see in the background of this page shows a wind blowing on some lilies, the heraldic symbol of Pope Pius VI (more on this topic in a separate page). 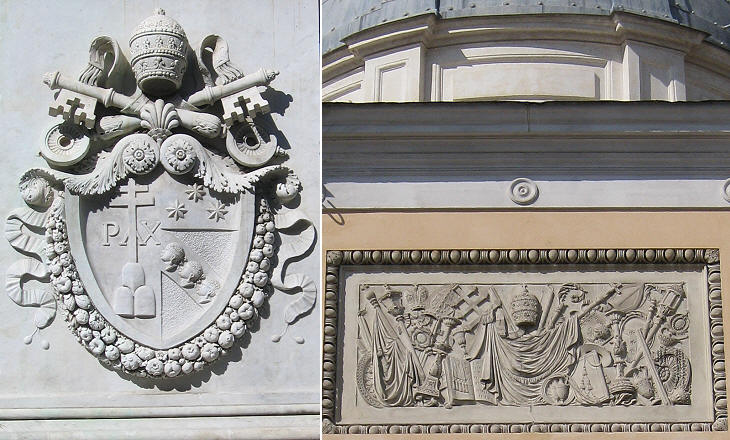 (left) Coat of arms of Pope Pius VII Chiaramonti on the basement of the obelisk at Pincio; (right) decorative relief with various religious symbols in Piazza del Popolo

XVIIth century patterns were eventually abandoned during the pontificate of Pope Pius VII in favour of a neater design; the depth of the relief was lowered; wings, heads of angels and hidden masks were taken away. However there are also other coats of arms of this Pope, e.g. at Spoleto which were designed following traditional patterns. 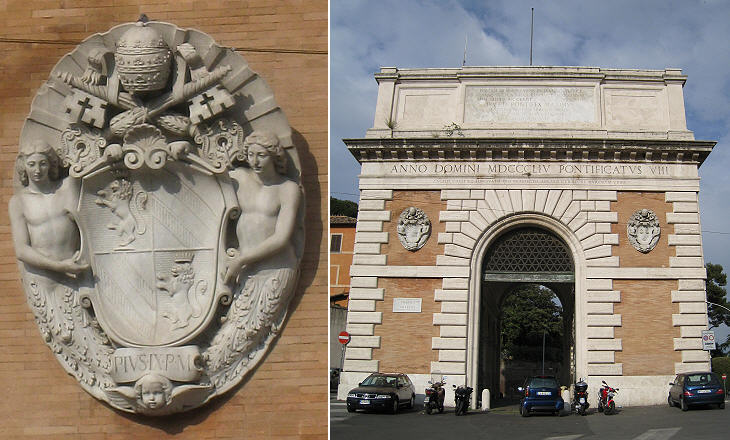 The long pontificate (1846-1878) of Pope Pius IX was characterized by a very high number of coats of arms; the majority of them were painted or consisted of small plaques; the Pope did however celebrate the reconstruction of Porta S. Pancrazio with an elaborate coat of arms which revived patterns of the XVIIth century and resembled in particular one of those designed by Gian Lorenzo Bernini for Fontana dei Quattro Fiumi.
After the annexation of Rome to the Italian Kingdom papal coats of arms were placed only on churches, while in Vatican City they continued to celebrate the completion of many other buildings or facilities; you may wish to see the catalogue for links to papal coats of arms after 1870.