- Valmontone and Montefortino (Artena)
(detail of a fresco at S. Onofrio)

Ferdinand Gregorovius, a German historian best known for his studies on medieval Rome, spent the summer of 1860 at Genazzano with his friend Johannes Muller, a painter; the two decided to go on a ride across the Volsci Mountains to see the Pontine Marshes. The journey was described in an account (Aus den Bergen der Volsker -From the Volscian Mountains) written by Gregorovius for a German paper. Muller was a watercolourist who later on opened a studio at Piazza Barberini. 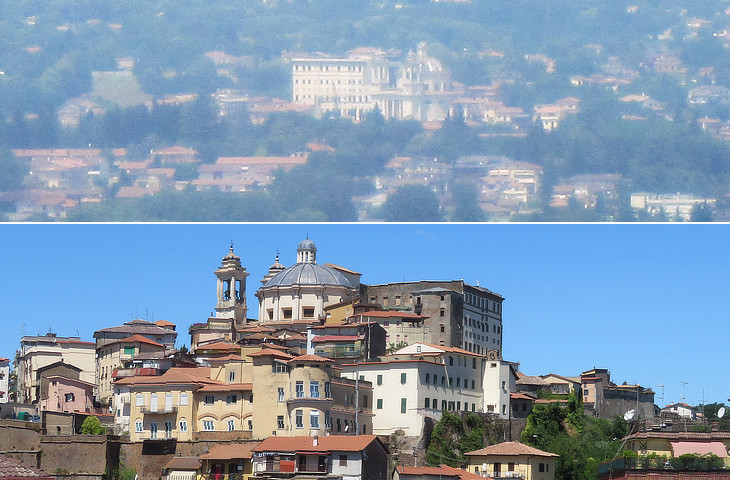 Genazzano is located on a hill of the Ernici Mountains which stand opposite the Volsci (or Lepini) Mountains; the two ranges are divided by the valley of the River Sacco; Gregorovius and his friend crossed the river near Valmontone, a small town easily identifiable from a great distance owing to an imposing palace with an adjoining church.
On his way to Valmontone Gregorovius met many shepherds and he noted their footwear (ciocie) which had straps of goat skins covering the entire leg; today the valley of the River Sacco is known as Ciociaria (the land of those who wear ciocie), while at Gregorovius' time it was considered part of Campagna di Roma (Roman Countryside); you may wish to see brigands wearing ciocie in engravings by Bartolomeo Pinelli. 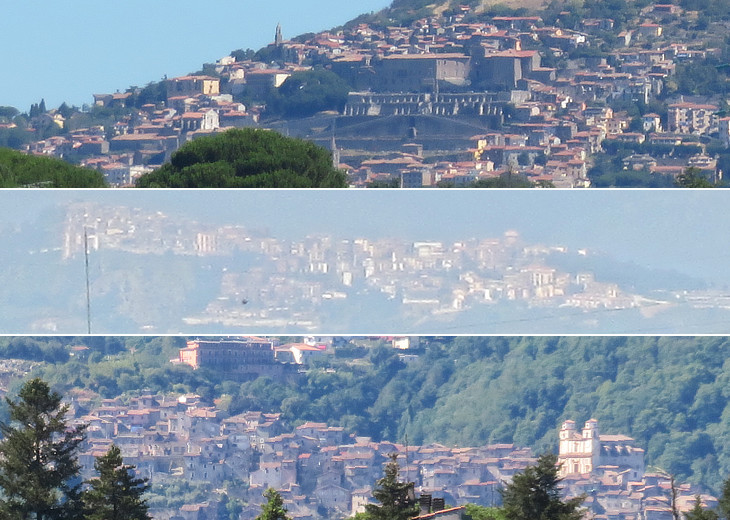 Prince Colonna still possesses estates in Latium, although younger races, enriched by Papal uncles, have annexed, either by purchase or by family arrangement, many of his ancient fiefs. Such are the families of Doria and Barberini. If you ask the herdsman, pasturing his sheep on Latian meadows, "To whom does the land belong?" he is sure to reply either "Colonna" or "Borghese".
Ferdinand Gregorovius - Aus den Bergen der Volsker -From the Volscian Mountains - 1860 - English translation by Dorothea Roberts.
In the XVth century at the time of Pope Martin V, Oddone Colonna, almost all of the valley belonged to his family; in the early XVIIth century however the Colonna sold some of their fiefdoms to the Borghese and the Barberini, the families of Pope Paul V and Pope Urban VIII respectively.
Valmontone however, although being at the centre of the valley, was not a Colonna fiefdom, but it belonged to the Conti di Segni, a family who acquired great power in 1198 when Lotario dei Conti di Segni became Pope Innocent III; in 1634 Valmontone was sold to the Barberini who in turn sold it to Camillo Pamphilj, nephew of the reigning pope (Innocent X) in 1651. 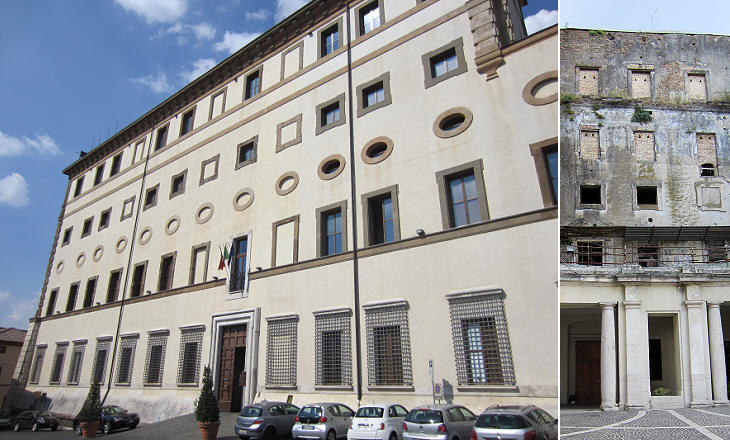 (left) Palazzo Doria Pamphilj; (right) courtyard showing a section of the building yet to be restored

A short ride brought me to Valmontone, which lies invitingly above the old Roman Way. The castle, the Doria Palace, and the church - striking buildings in the style of the seventeenth century - are placed together on a low, but abrupt, tufa rock; the town is gathered closely round about them, and encircled by orchards, vineyards, and rich meadows. Gregorovius
Camillo Pamphilj decided to build a very large palace at Valmontone, perhaps because its location made it very visible, thus adding prestige to the Pamphilj, who did not have previous ties with this region and were perceived as nuoveau riche by the Roman aristocracy.
The palace was designed in 1664 by Mattia De Rossi, then a young architect whose father Marcantonio redesigned S. Martino al Cimino, another fiefdom of the Pamphilj, a few years earlier.
In 1944 the building was so damaged by bombs that for a long time it was abandoned and on the verge of being pulled down because of fear it might completely collapse. It is now almost entirely restored, but some sections in the courtyard show its previous state. 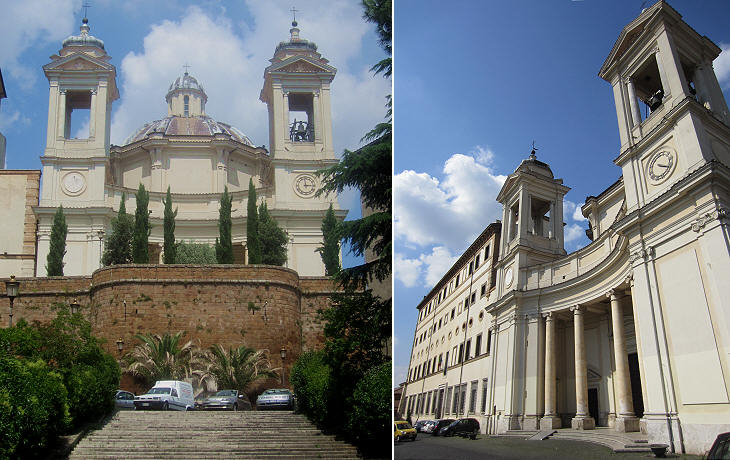 Camillo Pamphili, one of the wealthiest princes of the seventeenth century (his mother, Olympia Maldachini, gathered in money like a very harpy), built the palace and church. If we did not know their date, one glance at these buildings would suffice to betray it. They are of the Bernini period, as it is displayed in Rome. They resemble rather the Pamphili Palace, and the Church of St. Agnese in the Navona, than products of the Campagna. This family expended much money on princely and luxurious edifices. Gregorovius
The church adjoining the palace was designed by De Rossi some twenty years later at the initiative of Cardinal Benedetto Pamphilj, son of Camillo; De Rossi was a scholar of Gian Lorenzo Bernini, but in this work he did not follow one of the key rules his master taught him, i.e. to design a building taking into account the available space in front of it; Collegiata dell'Assunta is too large to be properly seen at close range, because the terrace upon which it was built is pretty narrow. 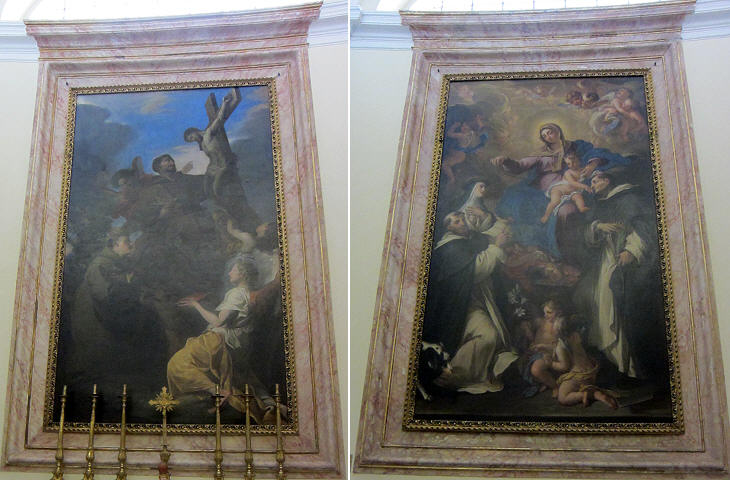 Cardinal Benedetto Pamphilj, was a protector of the arts, but more of music than of architecture; he is best known for having written librettos for works by Alessandro Scarlatti and George Frederick Handel (The Triumph of Time and Truth); the interior of Collegiata dell'Assunta is too bare for being a church of the late XVIIth century; the Cardinal however commissioned some paintings to the best artists of the period: Andrea Pozzo acquired fame with his illusionistic ceilings at S. Ignazio; in 1668 Giacinto Brandi was appointed Principe dell'Accademia di S. Luca, the leader of the Roman artists' guild (you can see other paintings by him in S. Carlo al Corso). 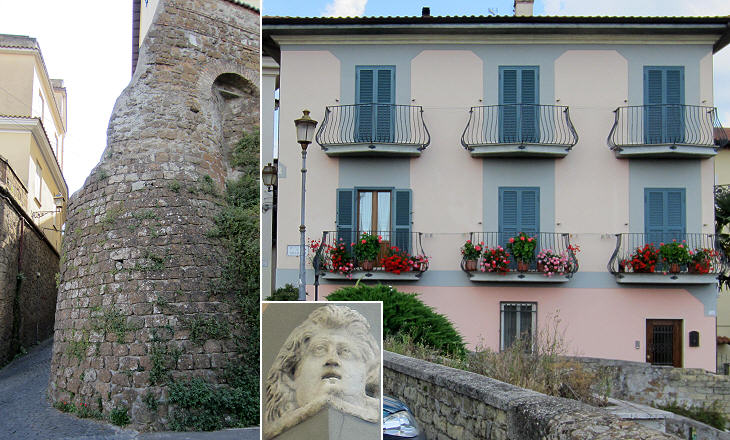 Small and remote as Valmontone may be, it is enlivened by the concourse of many travellers. Every one visiting Rome from the South passes through it, and endless trains of carts and waggons, drawn by slow white oxen, stream through it as they proceed to Rome to find a market for their corn and oil and wool. Three times a week a post carriage comes through. Gregorovius
Valmontone is located along Via Casilina and Gregorovius observed the passage of carriages and coaches on the road which linked Rome to Naples (this road was preferred to Via Appia, because the latter crossed the unhealthy Pontine Marshes).
The importance of Valmontone as a key communication point was increased by the construction of the Rome-Naples railway; on May 21, 1944 the Allied bombed the town to interrupt supplies to the German troops who were blocking their advance.
For this reason Valmontone retains very little evidence of its old walls, gates and buildings, although a lot of effort has been made to restore some of them. 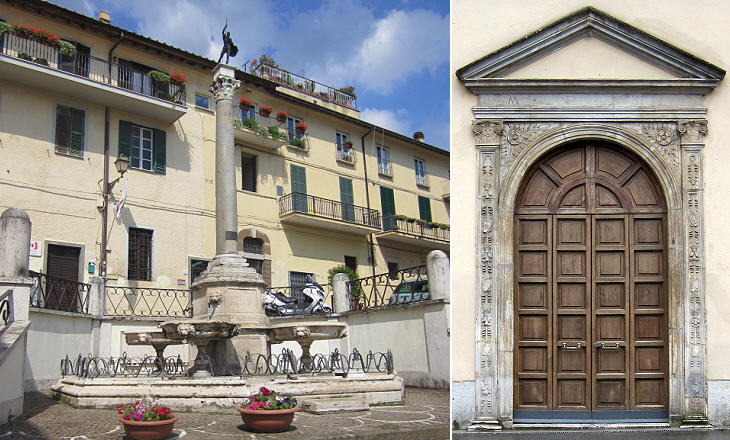 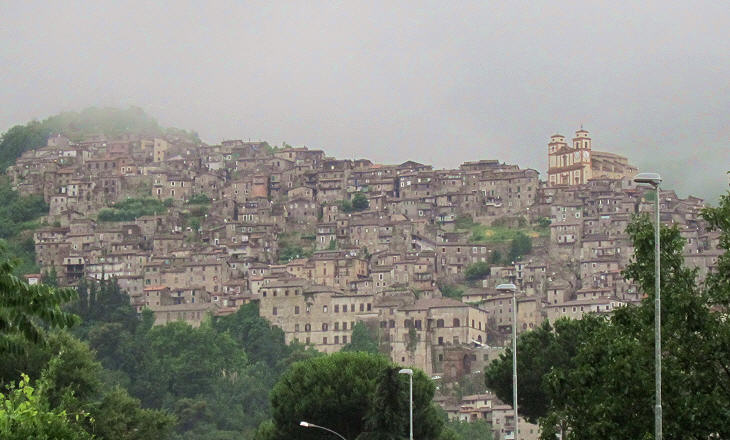 Valmontone has a remarkable view over the town of Monte Fortino, lying dark and grim on a hillside, and overcrowned by the huge baronial castle which rises above it. Gregorovius
On his way to Segni, his first overnight stay, Gregorovius crossed a countryside which he described as being among the most evocative ones he had seen in Italy; he saw to his right the dark houses of Montefortino, which were perched on a hill. 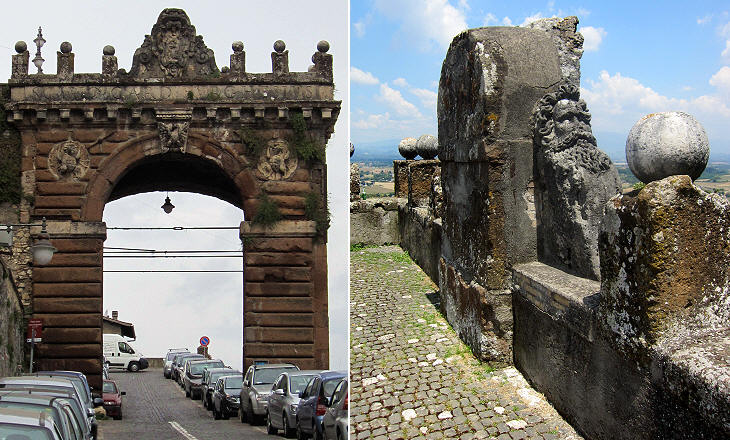 Montefortino was a fiefdom of the Colonna which in 1614 was sold to Cardinal Scipione Borghese, nephew of Pope Paul V; at that time it was almost a ruin because in 1557 the troops of Pope Paul IV, who waged war on the Colonna, plundered the town and destroyed all the houses. The Colonna did not have the financial means to effectively rebuild Montefortino.
Cardinal Borghese started a plan to improve the condition of its new fiefdom by opening a new road which reached the main square of the town. To celebrate this achievement Cardinal Borghese built a grand gate, similar to a triumphal arch; it was designed by Giovanni Vasanzio or Martino Longhi, two architects who worked for the cardinal at many other locations (e.g. Palazzo Borghese and Villa Borghese). 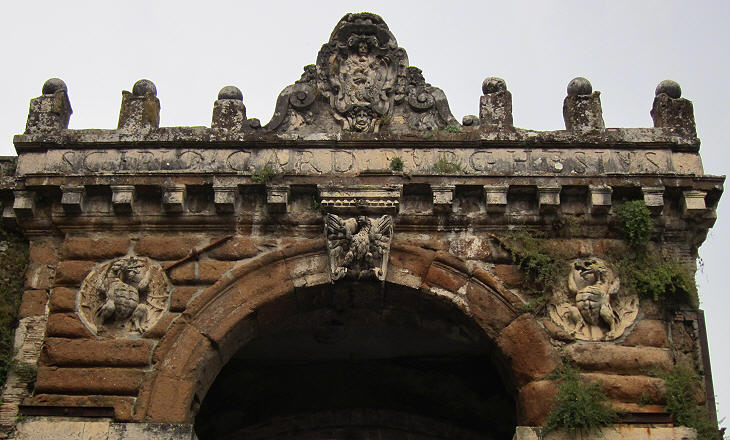 Today the name Montefortino does not ring a bell with many of its inhabitants, especially with the migrants who live in the houses at the top of the hill; in 1873 the town was renamed Artena on the (wrong) assumption that some ruins which stand on the mountain behind the town belonged to Artena, an ancient town mentioned by Livy as being a fortress of the Volsci. 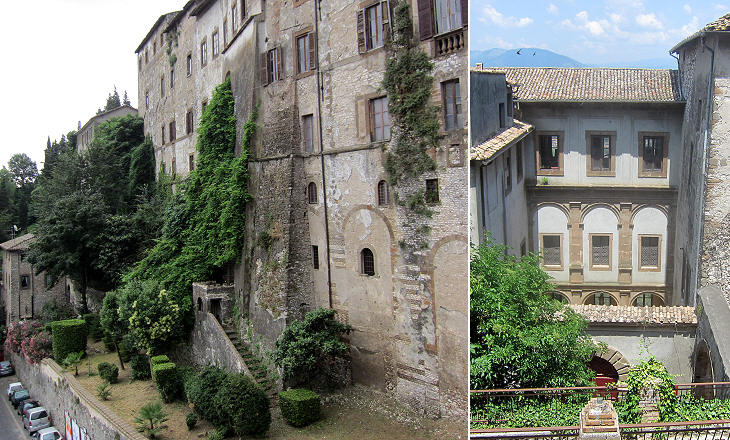 Palazzo Borghese: (left) from the terrace above the gate; (right) courtyard behind the main entrance

Giovanni Vasanzio redesigned two existing buildings of the Colonna in order to turn them into a palace which was suitable for a man having the status of Cardinal Scipione Borghese, who was in charge of all state affairs; the nature of the ground however placed significant limits on the ingenuity of the architect; a major part of the palace still belongs to the Borghese family. The Borghese built a series of cordonate (flights of low steps allowing the transit of horses and donkeys) which from the main square near Palazzo Borghese reached the top of the hill; they have not been replaced by modern roads and Montefortino is one of the very few locations near Rome where donkeys and small horses still earn their living carrying construction materials and commodities. 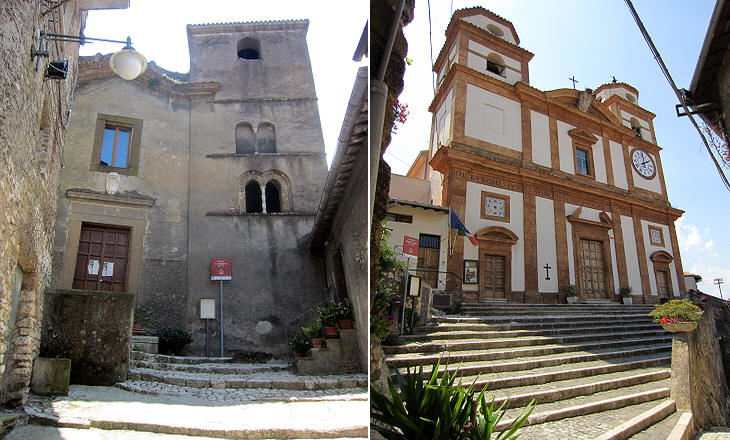 Marcantonio II Borghese, heir of Cardinal Scipione, restored the church of S. Stefano which retained a Romanesque bell tower (damaged in 1944); Camilla Orsini, Marcantonio's wife, belonged to one of the most ancient Roman families; she was a very pious woman and after the death of her husband she retired to live at Monastero della SS. Annunziata which she had helped to found; she also financed the construction of SS. Giuseppe e Orsola.
In 1661 Giovan Battista Borghese, grandson of Marcantonio II, started the construction of a new large parish church on the site of an old medieval building; he wanted the church to be visible from far away; he was the stepson of Camillo Pamphilj, who married his mother Olimpia Aldobrandini after the death of Paolo Borghese, her first husband; Olimpia was the last of her family (that of Pope Clement VIII) and at her death the Pamphilj inherited her possessions to the detriment of the Borghese; it is possible that the construction of large churches at Valmontone and Montefortino originated from this family quarrel (which eventually was settled in 1767). 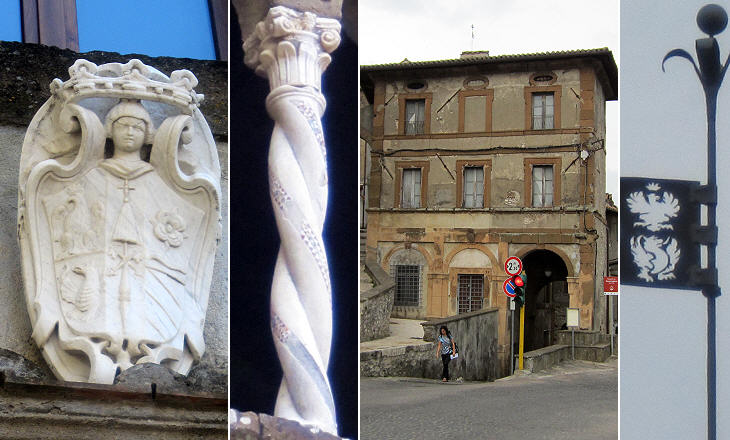 Details: (left) coat of arms of Marcantonio II Borghese and his wife Camilla Orsini at S. Stefano; (centre) a column on the bell tower of S. Stefano; (right) Palazzo del Governatore (the representative of the Borghese) and its weathervane with the Borghese heraldic symbols