You may wish to see a page on the fortress and the history of the island first. 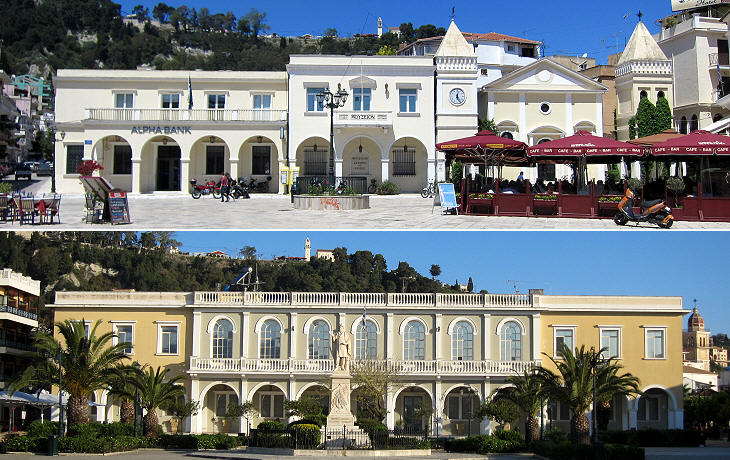 (above) St. Mark's Square and Church; (below) Dionysios Solomos Square and Zakynthos Museum

The Town is well built of Free-stone; but the Buildings not very high, by reason of the frequent Earth-quakes that happen there: which in the Spring are, some years, once or twice a week, and so shake all the houses, that the Stone-walls of them are all full of great cracks. One happened while I was there during my Quarentine in the Pest-house. That day it happened the Sun looked of a yellowish colour, which was looked upon as ominous. I was sitting leaning upon a Table; when on the sudden the Earth was so prodigiously shaken, that I thought the place (which was but one story high) would have immediately fallen on my head, it gave such a crack, and the Chairs, Stools, and Table so clashed together, that they rattled again. The unusualness of the thing made so deep an impression on my phansie, that I hardly believed the Earth stood still, so long as I staid on the Island after it. But the Inhabitants are so used to them, that they make little or nothing of them.
A journey into Greece by George Wheler, Esq., in company of Dr. Spon of Lyons - 1682
The town contains about 4,000 houses, and the principal street is wide, and sheltered at the side by piazzas. It is pretty and clean, and at its eastern extremity contains a flat paved Piazza, about the size of Queen Square.
William Turner - Journal of a Tour in the Levant - 1820
In 1953 a major earthquake struck Zante and nearby Cefalonia; only few buildings survived the earthquake and many people fled the island. Reconstruction and economic recovery were slow, but eventually the town was rebuilt and its Venetian urban design with low buildings, porticoes and squares was retained. The reconstruction however did not bring back St. Mark's, the Roman Catholic cathedral, to its original design. This can be seen in the image used as background for this page. 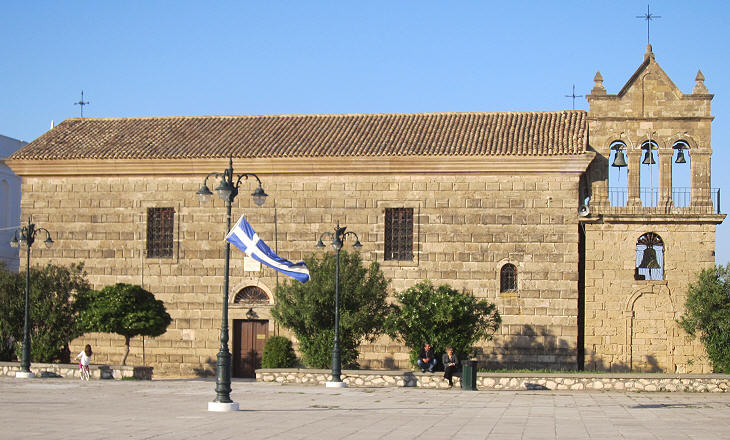 St. Nicholas of the Wharf

They have a great many little Churches, both within and without the Town. The best is that of Hagia-panda, or All-Saints; which is situated in the place leading to the Mole. (..) That of Saint Nicolo is well furnished with the offerings of Seamen, and is situated upon the Mole. Wheler
This small church is the only one which survived the earthquake; it was located on an islet linked to the town by a bridge and it belonged to a brotherhood of sailors, of whom St. Nicholas is the patron saint. 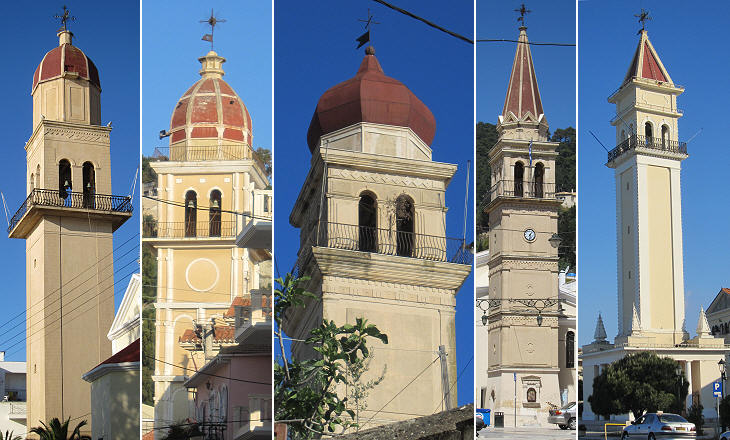 In the evening we crossed in a boat to the town, where a lodging was provided. A capacious harbour filled, besides other vessels, with large ships and glittering gallies, a flourishing city with steeples and noble edifices, the sound of bells, the dress and manners of Italy, were all articles to which we had been long disused. The transition from misery and desolation was as striking as it had been sudden. We drew a most favourable contrast, and rejoiced on our safe arrival in the happier regions of Christendom.
Richard Chandler - An account of a tour in Greece made at the expense of the Society of dilettanti - 1775 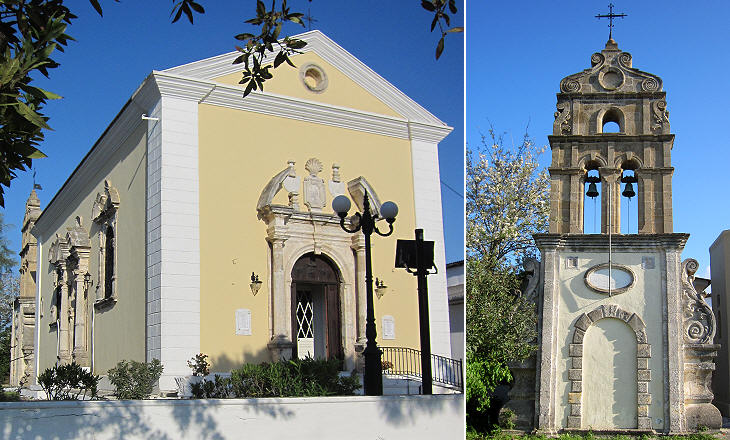 The inhabitants are chiefly Greeks, but wear the Italian dress, and are much latinized in their religious tenets and ceremonies. (..) The city of Zante extends along the shore, and is adorned with several handsome structures. The Roman Catholics have their churches, nunneries, and convents, with various orders of friars; and the Greeks, whom we had seen humble and depressed in Morea, here rivalled the splendid pomp of their worship. Chandler
Other churches suffered great damage, but they were carefully reconstructed by utilizing their original decoration and architectural elements. St. Charalambos' is located near the modern harbour and it was built in 1727 in fulfilment of a vow as stated by an inscription in Greek and Latin. 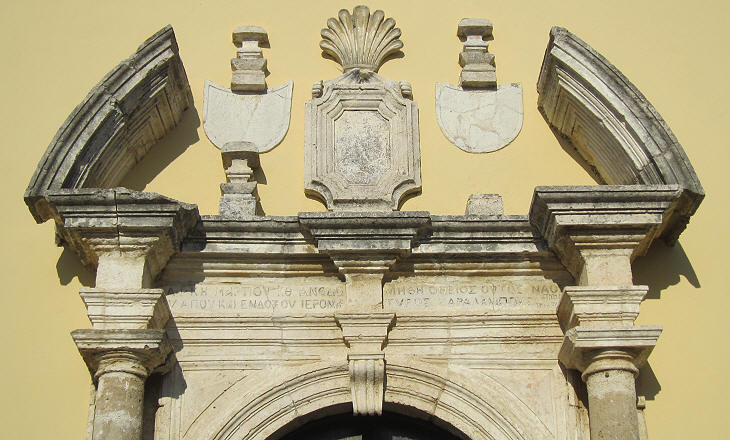 St. Charalambos': detail of the portal

Zante was hit by a pestilence and its Greek Orthodox inhabitants implored St. Charalambos for help; this IInd century martyr was known for having healed one of his torturers. According to his hagiography at the time of his martyrdom he was 113 years old. In the Roman Catholic tradition churches built in fulfilment of a similar vow were dedicated to St. Roch, e.g. at Arsoli. 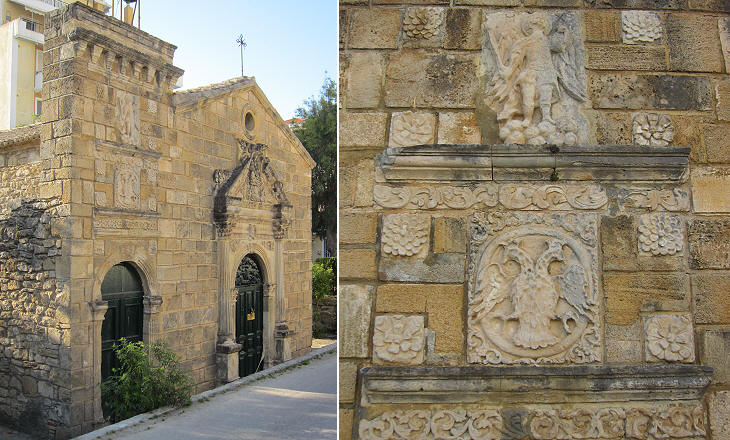 (left) Our Lady of the Angels; (right) relief on the bell tower

The Island affords Vines, that yield good, though very strong Wine; but which bears water so well, that it may be made as small as Venetian Garbo, and yet better tasted, and as brisk. The red Wine endures the Sea very well; but the Muskatels not; though they are very delicious, and in great plenty here. They make also abundance of excellent Oyl; but it is not permitted to be Exported by Foreigners, no more than the Wine: only what the Island can spare, is sent to Venice. Wheler
As a good season for the harvest is of great consequence to the people, they generally implore the intercession of their saints; solemnly visiting their churches, the priests and magistrates and persons of rank, both Italians and Greeks, walking in procession, in pairs, with lighted tapers in their hands. Chandler
The presence of many churches with an elaborate decoration is an indication of the relative wealth of Zante during the Venetian rule. The Republic of Venice promoted the development of the island by reclaiming marshes and by favouring the production of wine and olive oil. The fact that farming was not limited to a subsistence agriculture, but produced a surplus which could be exported in turn favoured the development of the port and of ancillary activities. 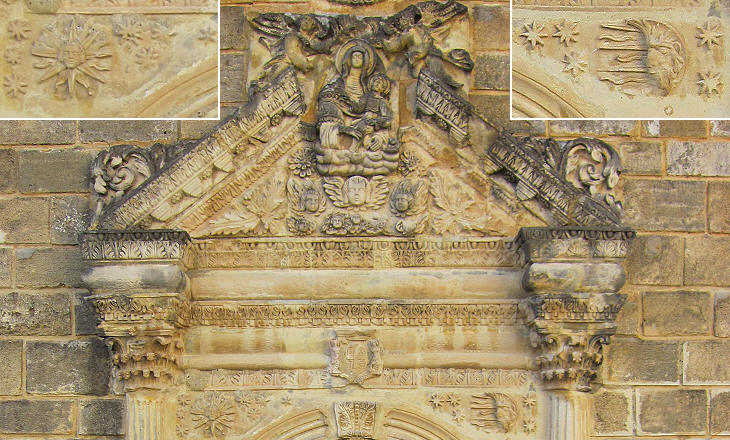 Our Lady of the Angels: reliefs of the portal

To maintain the Curran Trade, the English have a little Factory here, consisting of a Consul, and five or six Merchants. The Dutch have a Consul, and one or two Merchants; and the French have a Consul and Merchant in the same person. The English have the chief Trade here; and good reason they should: for I believe they eat six times as much of their fruit, as both France and Holland do. The Zantiots have not long known what we do with them; but have been perswaded that we use them only to Dye Cloth with; and are yet strangers to the luxury of Christmas Pies, Plum-potage, Cake and Puddings, etc. Wheler
The English, who have two or three merchants resident there, are the principal consumers of the Corinth-grape. The Dutch partake, and supply the other northern nations. The islanders (..) in general are ignorant of the many dishes in which currants are an ingredient. Our cook made a pudding, which was equally a subject of wonder and applause in the family where we lived. Chandler
Zante was known in particular for its currants of which England was a great consumer. The Venetian government levied high duties on these exports to the point that in 1581 Queen Elizabeth I reacted by favouring the foundation of the Levant Company which was aimed at finding other sources of currants (eventually Smyrna became a great supplier of them). 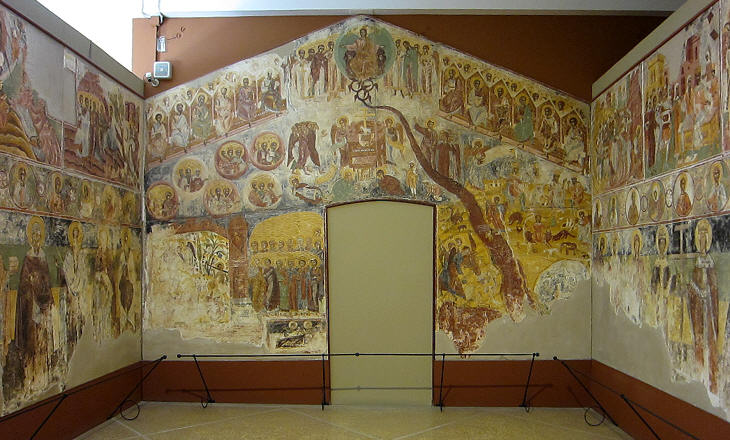 Zakynthos Museum: restored Byzantine style frescoes of a small church in the countryside

The Town is stretched along the shore, and is very populous; as is also the whole Island; wherein, beside the City, are reckoned fifty Towns and Villages. They profess the Greek Religion, but are much Latinized in Doctrine, although they extremely hate the Roman Church. They are not allowed a Bishop, but a Protopappa; and submit themselves to the Bishop of Cephalonia. Wheler
Not all the churches and monasteries which were razed to the ground by the earthquake were rebuilt; in some cases their frescoes or wooden paintings were reassembled inside the museum of the town. The exhibits show how local artists combined Byzantine and Italian styles. 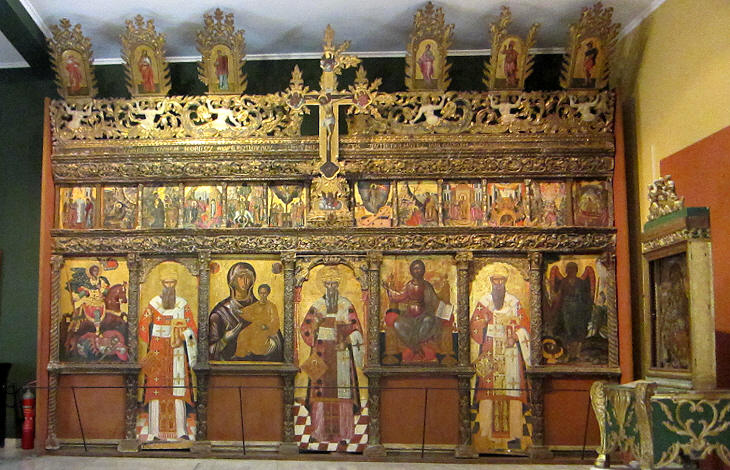 Zakynthos Museum: iconostasis (painted screen or wall separating the nave from the sanctuary in a Greek Ortodox church)

In 1669 Candia surrendered to the Ottomans after a siege of more than twenty years. Francesco Morosini, the Venetian commander, obtained the right to leave the town with the still large Venetian fleet under his command and to carry away not only the soldiers, but also the civilians. A large number of the Cretan refugees stopped at Zante and the island had a significant increase in population and resources as the incoming people belonged to the upper classes.

Cultural exchanges between Zante and Venice and Italy in general were customary. Primary education was given in Zante by Orthodox and Catholic institutions, but the sons of the wealthiest families were then sent to Venice to complete their studies. Some of them were enrolled at the University of Padua which was renowned for its teachers in the fields of medicine, astronomy, philosophy and law. 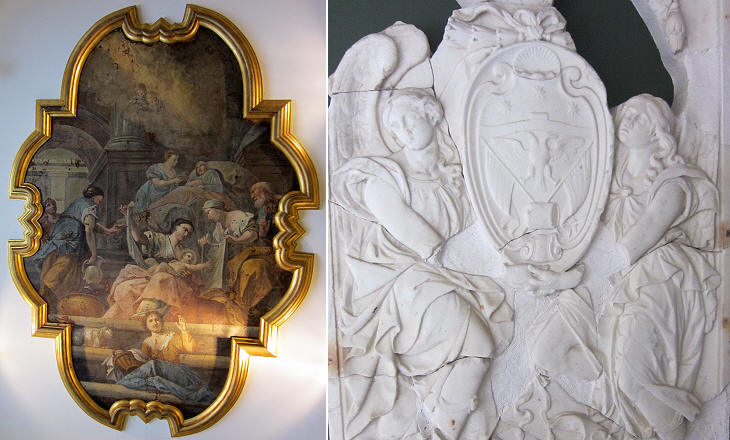 When eventually in 1797 the history of the Republic of Venice came to an end, the wealthiest families of Zante were imbibed with Italian culture and the works of art of the last period of the Venetian rule are not that different from those which decorated churches of towns near Venice, e.g. Chioggia. 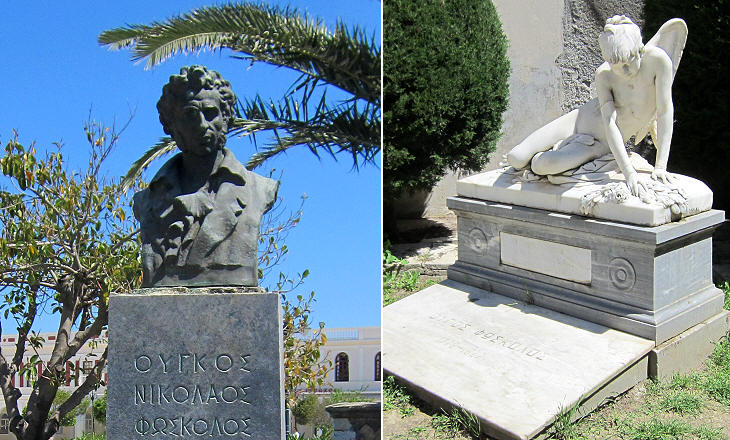 (left) Bust of Ugo Foscolo in Solomos Square; (right) monument on the site of his home

Zante is the birthplace of three great poets: the Greeks Andreas Kalvos and Dionysios Solomos and the Italian Ugo Foscolo. They lived between the XVIIIth and the XIXth century and they knew each other. Andreas Kalvos acted as secretary to Foscolo and wrote several poems in Italian. Solomos, of Cretan origin, wrote the commemoration of Foscolo who died in 1827 in England. Solomos is the author of Hymn to Liberty, the Greek national anthem and the largest square of Zante is dedicated to him, but the major part of his literary production was written in Italian. Foscolo, who dedicated one of his finest sonnets to Zante, is remembered by two small monuments. 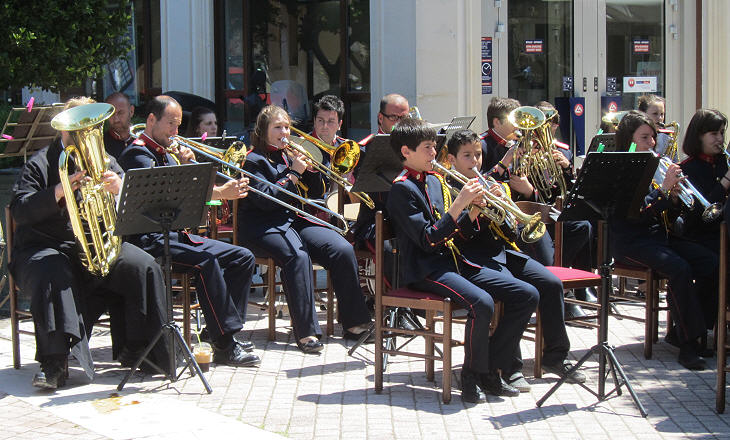 Hymn to Liberty
We knew thee of old,
O, divinely restored,
By the lights of thine eyes,
And the light of thy Sword.
From the graves of our slain,
Shall thy valour prevail,
As we greet thee again,
Hail, Liberty! Hail!

Return to page one: the fortress.