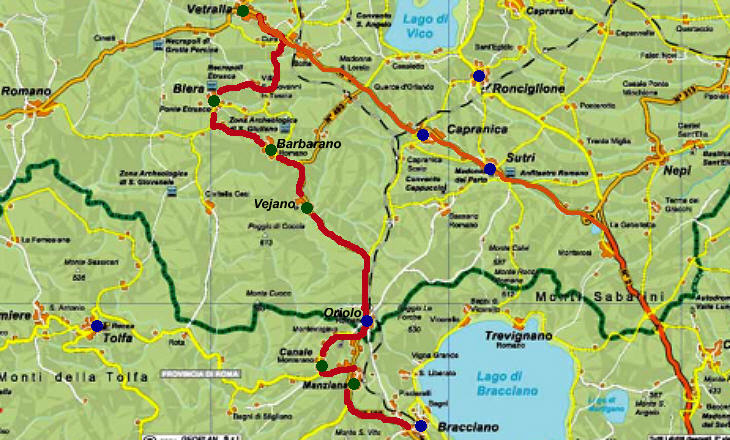 Via Cassia was the main road which linked Rome to the Etruscan territories it conquered in the early IVth century BC. It ran to the east of Lake Bracciano then it turned westwards to reach Sutrium (Sutri), an allied town. In the IIIrd century BC the Romans built Via Clodia, a second inland road across Etruria which branched off Via Cassia at today's Madonna di Bracciano and ran through a series of small towns to the west of Lake Bracciano. Today it joins Via Cassia between Capranica and Vetralla. In the past, after Blera, it went westwards to reach Tuscania. 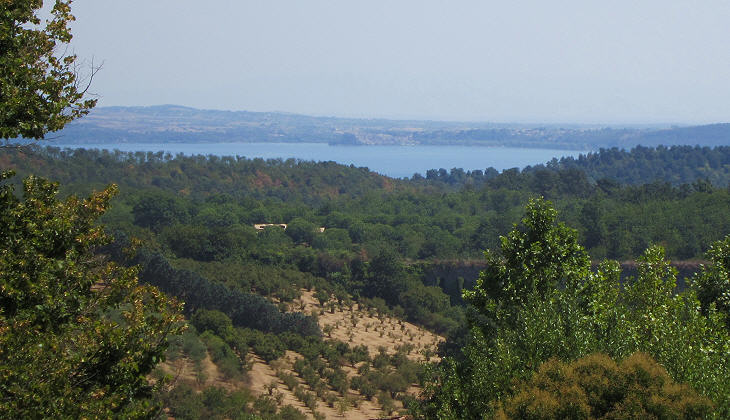 View of Lake Bracciano from Manziana: in the distance Anguillara, in the foreground arches of Acqua Paola

Manziana, maybe named after the manzi (steers) which were raised in the area, was a fiefdom of the di Vico family who ruled this region for many centuries and during the absence of the popes from Rome in the XIVth century made an attempt to establish a sovereign state in northern Latium. The return to Rome of the popes from Avignon put an end to the projects of the di Vico. Eventually an attempt by Giovanni di Vico to undermine the authority of Pope Eugenius IV ended in defeat. In 1435 he was beheaded at Soriano. 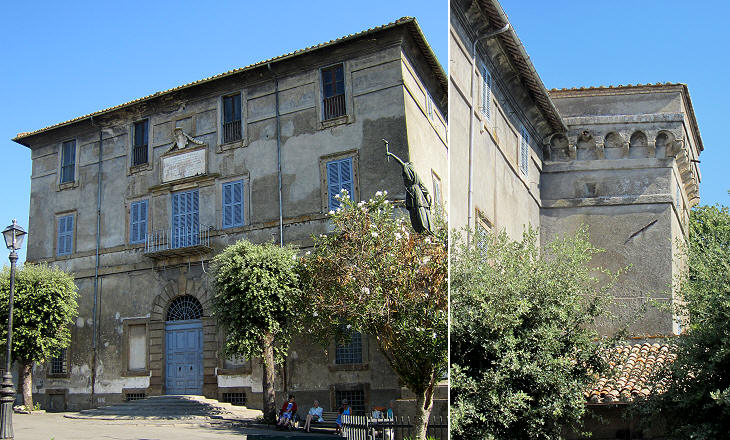 (left) Palazzo Tittoni, former residence of the officers of Spedale di S. Spirito; (right) one of the towers of the di Vico castle which were incorporated into the palace

Manziana became a possession of Spedale di S. Spirito in the XVIth century. Its administrators called in settlers from Tuscany to harvest the timber from the woods of Manziana. Towards the end of the century it was decided to provide the capannari (those who live in huts) with improved accommodation and Ottaviano Mascherino (or Mascarino), an architect best known for having initiated the construction of Palazzo del Quirinale, was charged with the design of a small town which included a building for the officers of the institution and a public fountain. 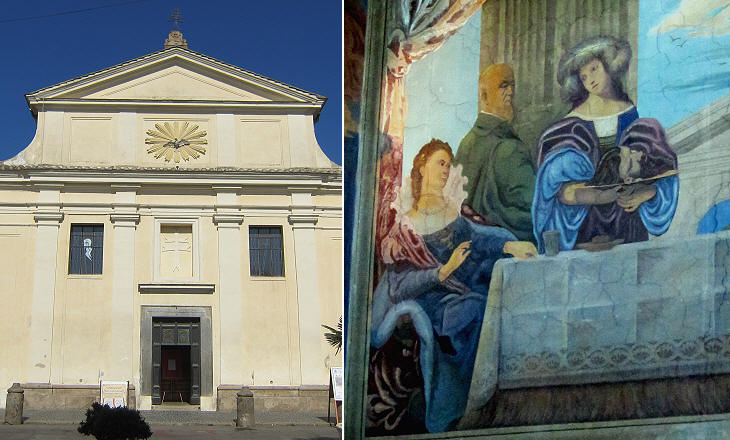 (left) S. Giovanni Battista; (right) detail of a fresco in the apse

The religious needs of the inhabitants of Manziana were taken care of by the construction of a church dedicated to St. John the Baptist, the patron saint of Florence who was much venerated by the settlers of Tuscan origin. Similar to churches and buildings of the Florentine community in Rome (e.g. S. Giovanni Decollato) it was decorated with rather gruesome frescoes showing the head of the saint. 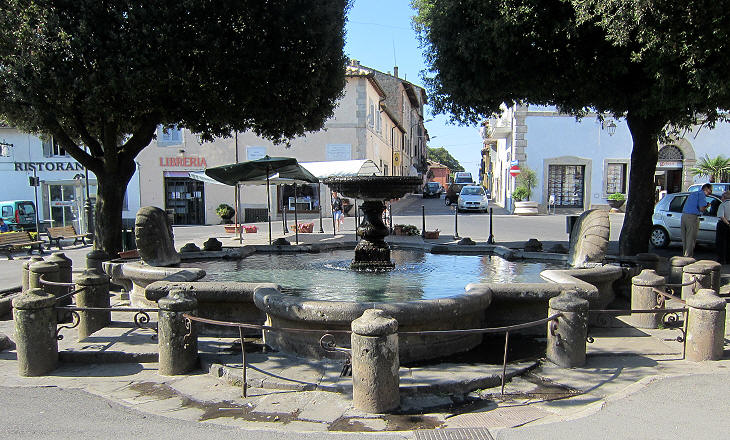 The palace, the church and the fountain were all redesigned to a greater or lesser extent in the XVIIIth century. The pillars around the fountain were placed to prevent animals from drinking from it. The shape of the basin is typical of the fountains built in the late XVIth century in Rome, such as that in Piazza della Rotonda. 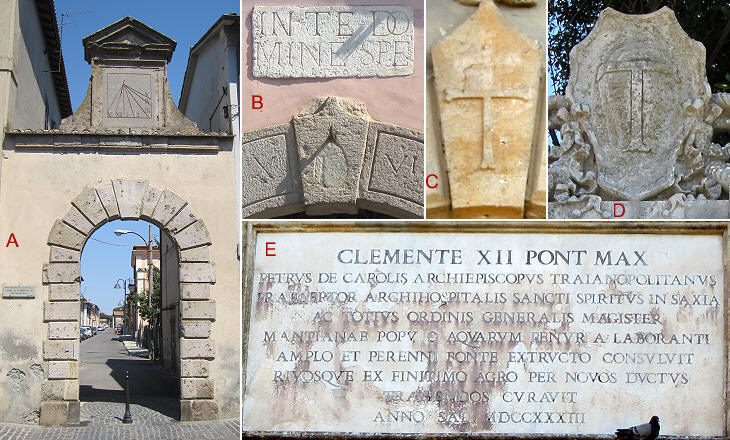 Memories of Old Manziana: A) a gate with a sundial; B) detail of a 1620 house with an inscription saying "In You Lord Hope"; C) a symbol of Spedale di S. Spirito on the main building which is now known as Palazzo Tittoni after Tommaso Tittoni (1855-1931), a politician who set his residence in Manziana: the original double cross (which you can see in the image used as background for this page and at Palidoro, another possession of the hospital) was modified to resemble a "T"; D) a "coat of arms" of Mr. Tittoni; E) 1733 inscription celebrating an improvement to the aqueduct carrying water to the fountain by Pope Clement XII 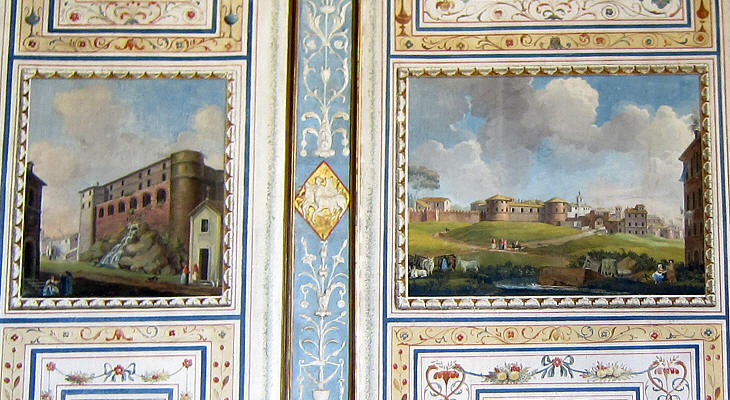 On December 20, 1669 65 cardinals met to elect the successor to Pope Clement IX. 61 cardinals were Italians, but they had to take into account the wishes of the kings of France and Spain who had the right to veto the election of a candidate they disliked. Four months later the cardinals were still in conclave. The delay embarrassed many of the participants who decided to elect Cardinal Emilio Altieri, assuming that his age (eighty) would have made him accepted as an interim solution by the French and Spanish ambassadors, who, on behalf of their masters, watched the outcome of the conclave. The interim solution lasted longer than expected; Pope Clement X, as Cardinal Altieri chose to be called, lived for more than 6 years after his election.
His (adopted) nephew Cardinal Paluzzo Paluzzi Altieri was charged with the administration of the Papal State. Maybe because he feared he would have covered this role for a very short time, he favoured his relatives as quickly and as much as possible. Eventually Clement X passed away, by which time Cardinal Paluzzi Altieri had ensured his family's wealth for centuries to come. Gaspare Albertoni Paluzzi, a nephew of the cardinal, married Laura Caterina, a niece of the pope, and in a short matter of time he was appointed Duke of Monterano, Prince of Oriolo and Prince of Viano (today's Vejano), three small fiefdoms along Via Clodia. At the request of the Pope he changed his surname to Altieri. 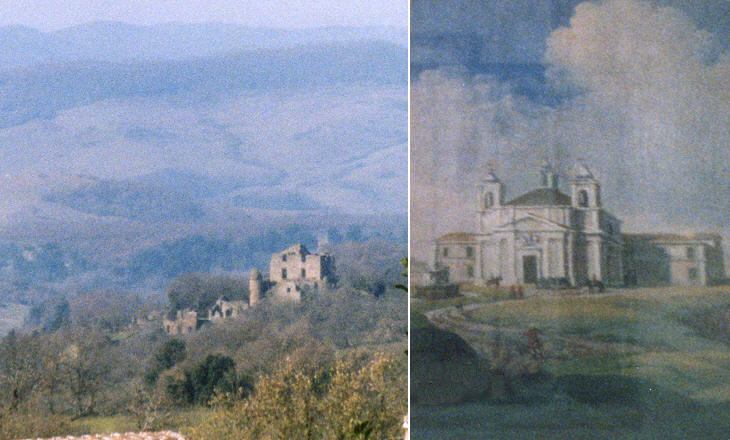 The Altieri sought the advice of Gian Lorenzo Bernini, who supervised the work of Mattia de' Rossi, one of his assistants, to provide Monterano with a baronial palace, a large church, a monastery and a monumental fountain.
Today the palaces and churches of Monterano are in ruins. The small town was located in a depression between the hills surrounding Lake Bracciano and those of Tolfa on the coastline. This position required continuous attention to ensure rainfall found its way towards the sea. But the popes did not promote farming in their territories: they bought large quantities of wheat and oil abroad and sold them at very low price to the many religious institutions that cared for the poor. This policy depressed the price of agricultural yields and in turn led to the abandonment of most of the land near Rome. This occurred also at Monterano and the area became marshy and unhealthy because of malaria: Monterano was almost a ghost town when in 1799 the French set fire to it after having done the same at Tolfa. 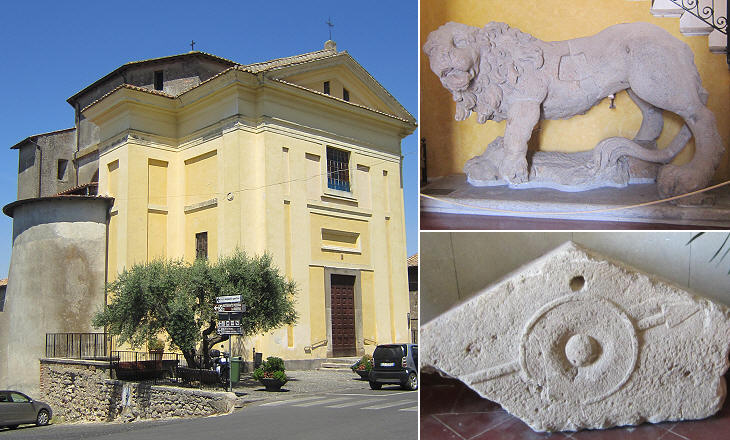 The inhabitants of Monterano moved to the hamlet of Canale which was located on higher ground where Mattia de' Rossi had built a church. The statue of a lion, which once was at the top of a monumental waterfall designed by Bernini is now in the Town Hall of Canale which houses some ancient reliefs and capitals found in the area. 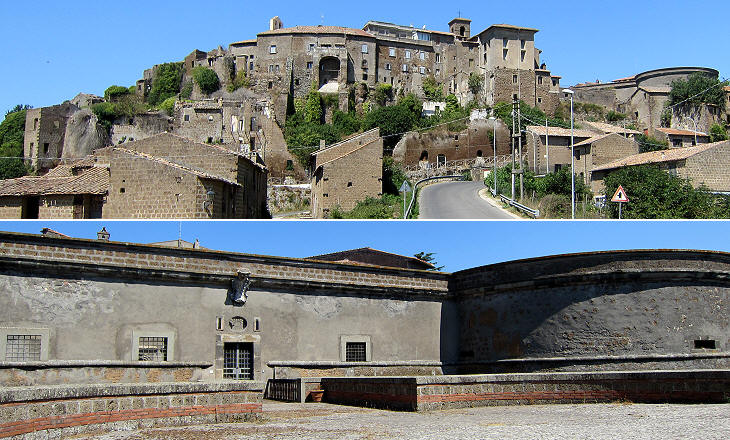 (above) View of Vejano from the south; (below) access to the fortress

In 1872, after the annexation of Latium to the Kingdom of Italy the name of the town was changed to Vejano to avoid confusion with other Italian locations by the same name.
Viano is situated on high ground, a factor which favoured the construction of fortifications. Those of the town are particularly imposing as they were built after the previous ones were razed to the ground by Pope Alexander VI Borgia. The inscription in the icon of this section states that the fortress built by Giorgio Santacroce (presumably in 1493) was destroyed by the Pope and it was rebuilt by his son Onofrio in 1518.
The Santacroce acquired Viano (and Oriolo) in 1493 through a donation by the Orsini, Dukes of Bracciano. In 1494 the Orsini helped Charles VIII, King of France in his failed campaign to conquer Naples, causing the reaction of the Pope. Papal troops laid siege to Bracciano, but were unable to seize its castle and turned their attention to Viano, as the Santacroce were allies of the Orsini. 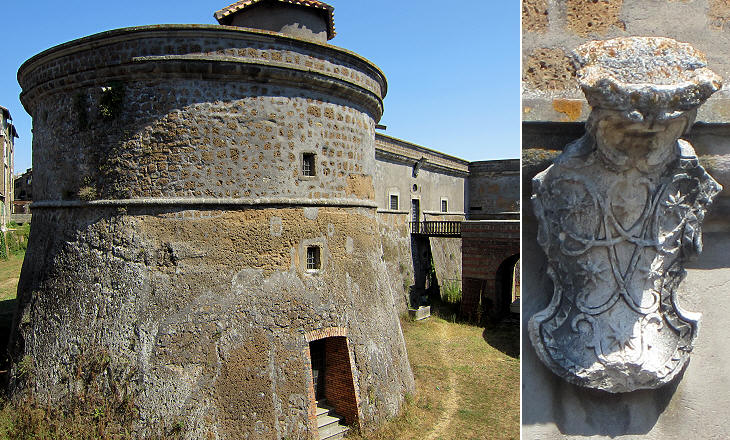 (left) One of the main towers of the fortress; (right) coat of arms of the Altieri at the entrance

The Santacroce retained possession of Viano until 1604. In that year Onofrio V Santacroce was beheaded on the charge of having helped his brother Paolo in the murder of their widowed mother whose pregnancy was regarded as a disgrace for the family. It was a crime similar to that of Beatrice Cenci. The Papal State confiscated the Santacroce properties as it had done with those of the Cenci, but the Orsini were able to repossess Viano because of a clause in the act of donation. 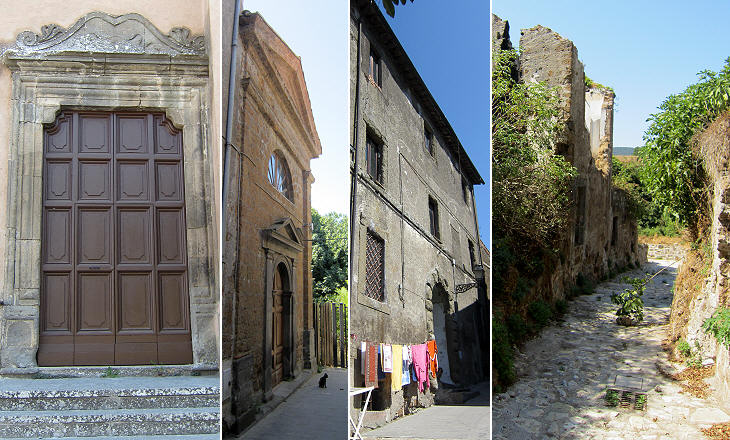 (left to right) Portal of the parish church; Cappella Santacroce; a small palace; the crumbling part of the old town

In 1671 Viano was bought by the Altieri who did not care much about embellishing their new fiefdom as they preferred to reside at Oriolo. In June 1944 Viano was bombed; the target was the fortress, which however was not damaged, whereas most of the old town was hit. Today only very few houses near the fortress are inhabited. The state of abandonment of the old town has led to the collapse of walls so that authorities have been forced to close the area.