Links to this page can be found in Book 9, Map C3, Day 4 and Day 5, View C7, Rione Pigna and Rione Sant'Eustachio. 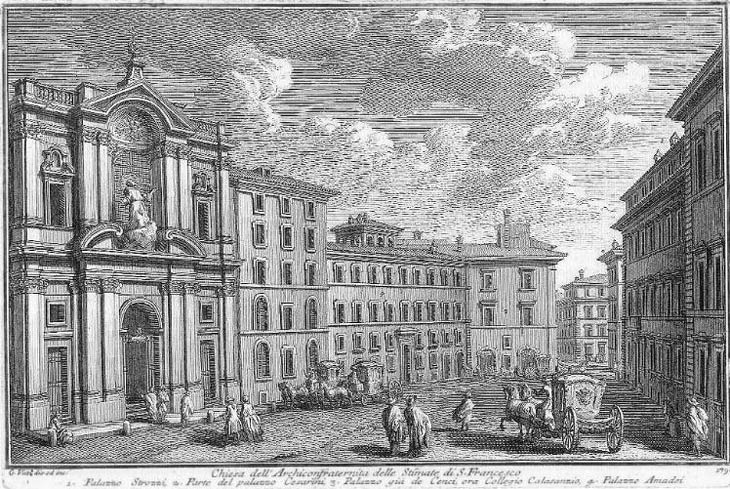 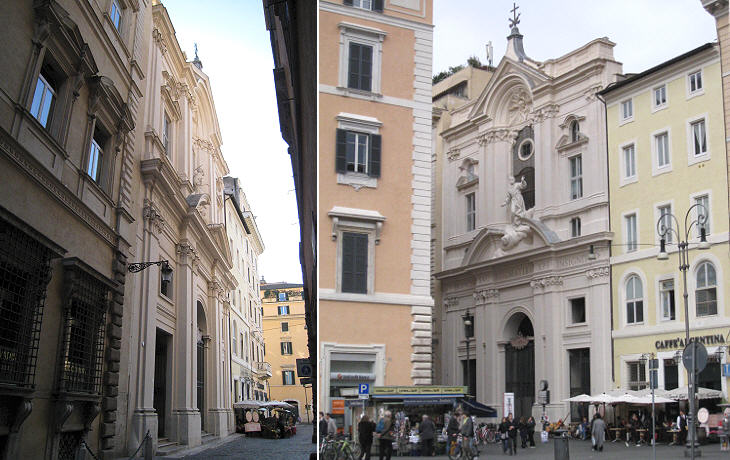 Views in November 2008: (left) from the same point as in the plate; (right) from the opposite direction

The wishes of Milizia and Vasi were fulfilled in part in the 1880s when a large street (Corso Vittorio Emanuele) was opened to link il Gesù with the Vatican. Palazzo Amadei was demolished and replaced by a much smaller building. Palazzo Strozzi was shortened too. In 1929 it was the turn of Palazzo Cesarini (and part of Collegio Calasanzio) to be pulled down. 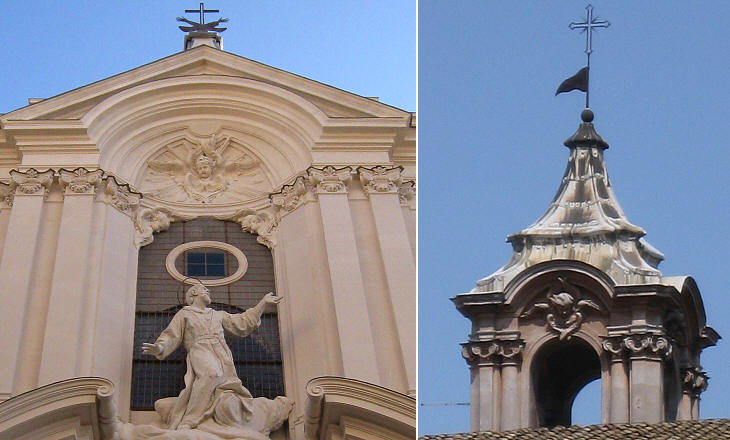 (left) Detail of the façade with the statue of St. Francis by Bernardino Cametti; (right) bell tower

The church was designed in 1714-1721 by Giovan Battista Contini and Antonio Canevari on the site of a previous one which was dedicated to Quaranta Martiri (Forty Martyrs) di Sebaste. It belonged to a brotherhood (Arciconfraternita delle Stimmate di S. Francesco) having the objective of helping the sick and burying the dead. A statue portrays St. Francis in the act of receiving the stigmata. The bell tower is surrounded by buildings and it can be seen only from a great distance. 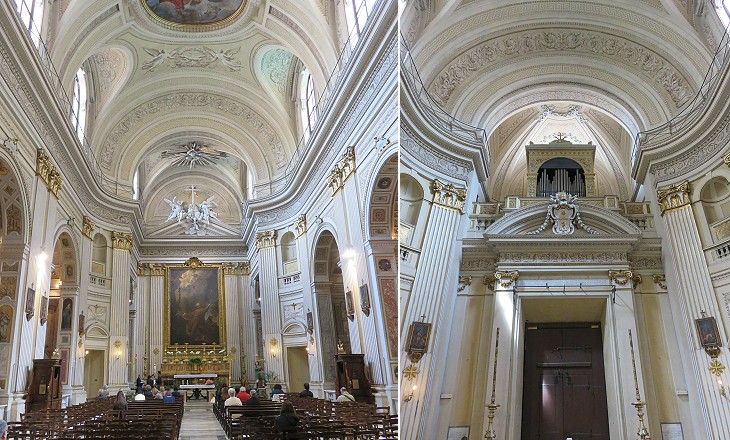 (left) Interior; (right) rear façade with a coat of arms of Pope Clement XI, who laid the first stone

Giovan Battista Contini was a highly reputed architect when he was asked to design the church, but he soon had a quarrel with the leaders of the brotherhood and the task of carrying on the construction was assigned to Antonio Canevari, a younger architect who eventually left Rome to work in Portugal and in Naples. The interior of the church was in part redesigned by Giuseppe Valadier in 1828-1829. 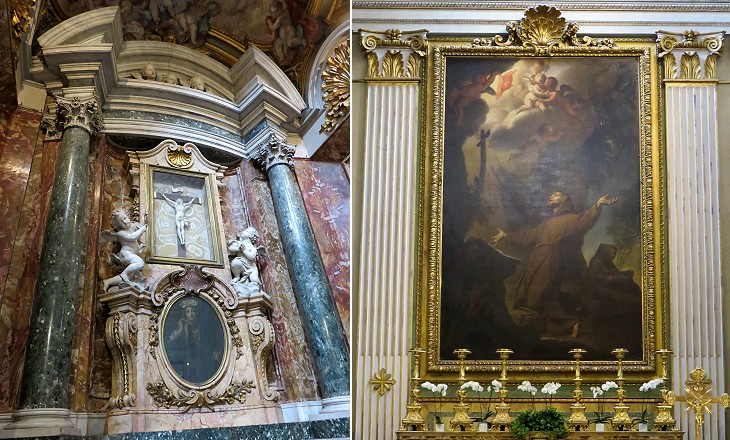 (left) Altar in Cappella del Crocifisso; (right) large painting by Francesco Trevisani (1719) in the apse in an architectural frame by Giuseppe Valadier

Only Cappella del Crocifisso, one of the six chapels, was decorated in the XVIIIth century. According to the fashion of the time this was done by using precious marbles and elaborate stuccoes. 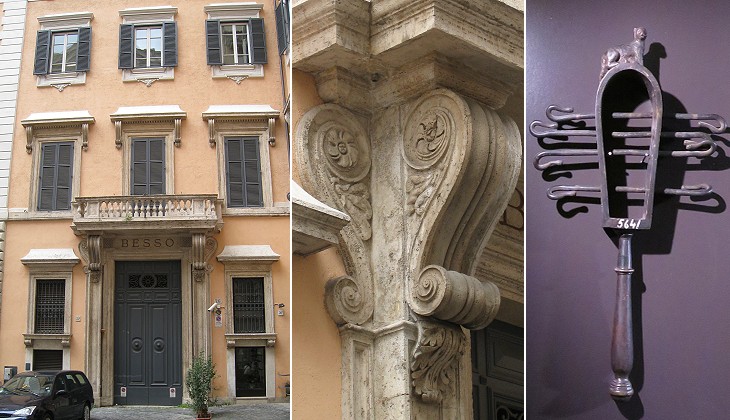 (left) Old entrance; (centre) detail of the original part of the building; (right) Archaeological Museum of Florence: "sistrum", a musical instrument associated with the worship of Isis (Ist century AD), formerly in the collection of Leone Strozzi in this palace

The Strozzi were a family of Florentine bankers whose palace in Florence is a masterpiece of Early Renaissance. The Roman branch of the family bought this building opposite the church in 1649 from the Olgiati for whom it had been designed by Carlo Maderno in the early XVIIth century. The Strozzi had a "Florentine" chapel at nearby S. Andrea della Valle and two farms on the hill of Monte Mario. Collegio Calasanzio or delle Scuole Pie was a brand new building when Vasi made his etching as it had been erected in 1746. Josè de Calasanz was a Spanish priest who founded in 1597 in the sacristy of S. Dorotea the first school in Rome which did not require an admission fee. He was buried in S. Pantaleo which after his canonization in 1767 was dedicated also to him. The members of his order are usually known as Scolopi, or Piarists after Scuole Pie (pious schools). Architect Tommaso De Marchis made only one concession to the decoration of the building in the elaborate capitals and in the cornice. The elegant madonnella is a copy of Raphael's Madonna della Seggiola. You may wish to see Piaristenkirche, a very interesting XVIIIth century church of Vienna. 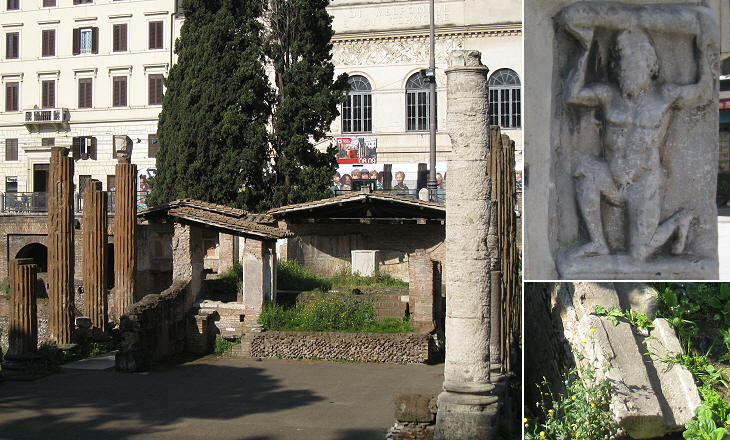 (left) Remains of the old church and of temple A; (right-above) relief portraying Atlas; (right-below) a Roman forica (public latrine)

This small church is situate in the piazza Cesarini; and had been a parochial church from the XVII. century, until suppressed by Leo XII. At the close of the XVII. century it passed into the hands of its present possessors , who occupy the adjoining house to the left.
Rev. Jeremiah Donovan - Rome Ancient and Modern - 1843
The Cesarini were a very prominent Roman family for many centuries. Genzano was one of their fiefdoms. The palace and the family church were pulled down in 1929 to enlarge the street linking Corso Vittorio Emanuele with Via Arenula. The church was also called S. Nicola de Calcarariis, after the medieval kilns where for many centuries ancient marbles were turned into mortar.
It was known that the church had been built on a Roman temple and that its cloister made use of the columns of a second temple, but the excavations led to the discovery of four temples in a sacred precinct (Area Sacra). The ruins of the temple upon which the church was built date back to the IIIrd century BC. The columns were made with tufa coated with plaster; the travertine ones on the right are of a later period.
A small relief showing Atlas supporting the celestial vault is walled in a modern building at the southern side of the area. The Romans took care also of practical needs and the excavations brought to light a forica which probably was part of Teatro di Pompeo. 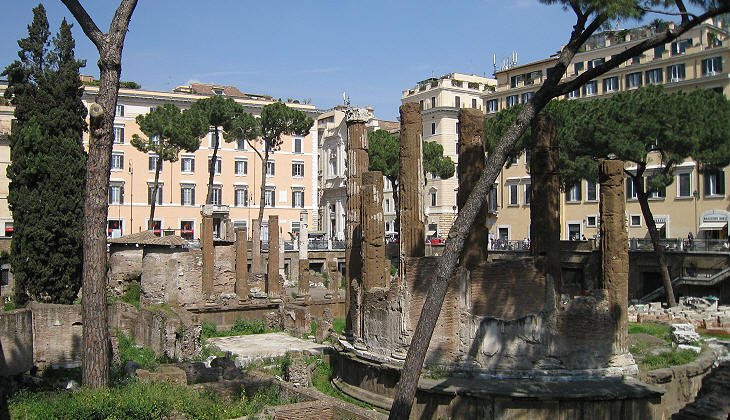 The excavations led to unearthing a fine circular temple with tufa columns crowned by travertine capitals. It is thought that it was dedicated to Fortunae Huiusce Diei, the Fortune of Today, an indication of the importance of good luck in the beliefs of the ancient Romans. Because there is uncertainty about the names of the temples they are usually referred to with letters. At one point they might have been included in Porticus Minuciae, an area where key commodities were distributed free of charge. 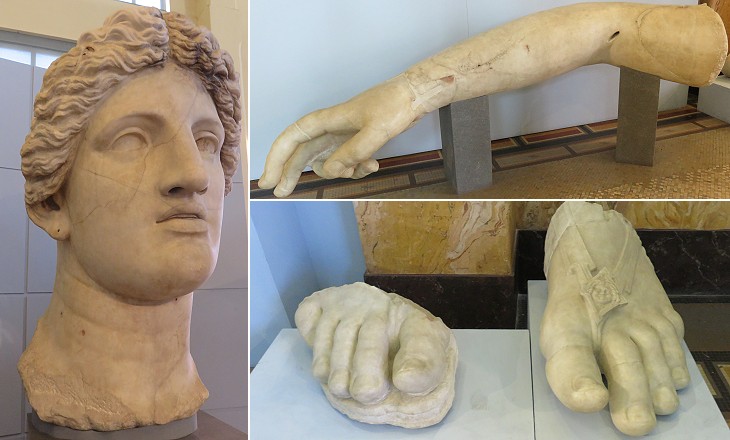 Centrale Montemartini: pieces of an acrolith statue of Fortunae Huiusce Diei which were found in Temple B

The statue was an acrolith (from the Greek words meaning height/extremity and stone) i.e. the head, the arms and the legs were made of marble, whereas the clothed parts of the body were made of wood or bronze. It was not a new development in sculpture because this technique had been used by Phidias at Olympia in the Vth century BC. Another later acrolith statue was found at Basilica di Massenzio. 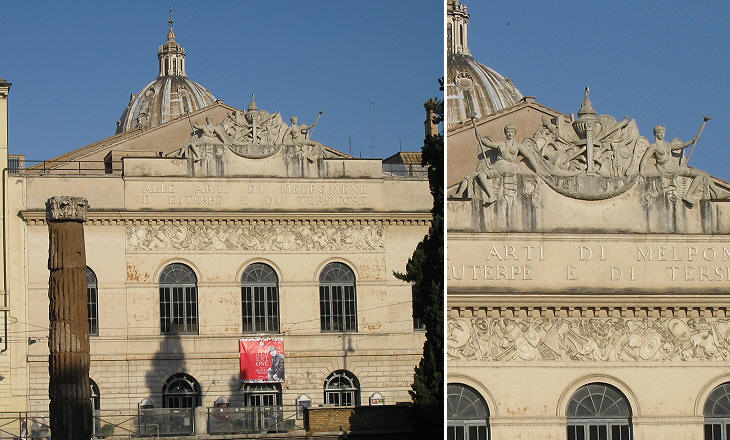 The teatro di Torre Argentina takes its name from a neighbouring tower called Argentina from its proximity to the palace of the Card. Bishop di Argentina; is used for comedy and tragedy, and also for the feste di ballo during the Carneval. (..) The Apollo, formerly the Tordinona, is situate near the bridge of S. Angelo; (..) is the handsomest theatre in Rome; (..) and is used for grand operas and for masquerades, during the Carneval. Donovan
In 1731 the Cesarini built a theatre on a site next to their palace. The building was designed by Girolamo Theodoli, but the façade is an 1826 addition by Pietro Holl which reflects the impact of Neoclassicism on traditional baroque subjects (you may wish to compare the two personifications of Fame on the top of Teatro Argentina with those of Fontana di Trevi). It is now a drama theatre, but in the past it was used also for opera buffa.
On February 20, 1816 the premiere of Almaviva by Gioacchino Rossini was a sensational fiasco, but at the second performance the public had a different opinion and Almaviva (later on called Il Barbiere di Siviglia) became one of the best known Italian operas. The same occurred a year later at Teatro Valle for La Cenerentola (Cinderella).
The theatre was commonly called Teatro Argentina and the whole area is similarly named (Largo Argentina, Via di Torre Argentina). According to Vasi, this is due to the fact that a Cardinal Cesarini was for a while the bishop of Strasbourg (France), which in Latin was called Argentorate. When he returned to Rome he put over many windows the inscription "ARGENTINA" and this word in the end prevailed. 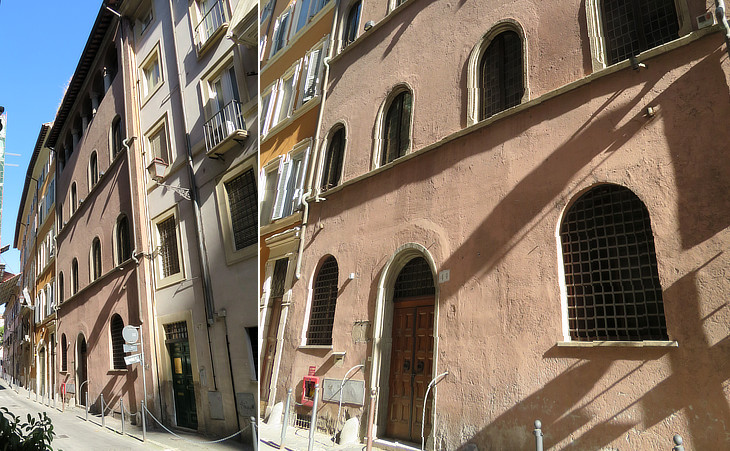 As a matter of fact the bishop was not a member of the Cesarini family. His name was Johannes Burckardt (italianized in Burcardo) and he arrived in Rome in 1479. He built a compact, tall palace where Italian and German elements are mixed. At his death the Cesarini acquired the building which was modified in the XIXth century. Today it houses a small museum and a library on the history of theatre in Italy. 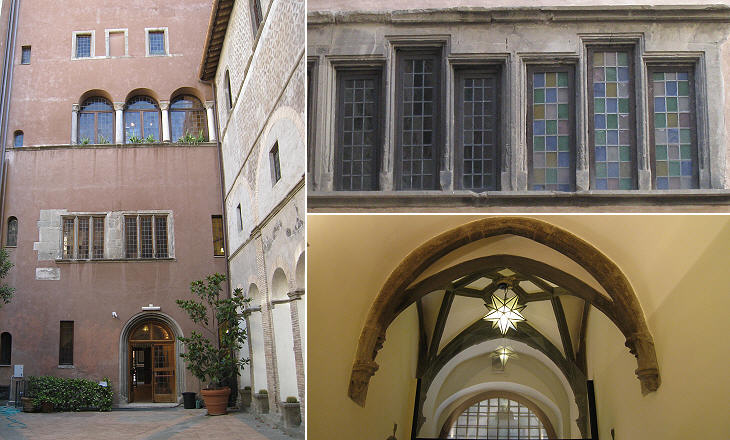